Sydney Catholic Schools presented four special performances of “School of Rock – The Musical” in an arena spectacular based on the original Broadway show and staged at the 16,000-capacity Qudos Bank Arena in Sydney, Australia. 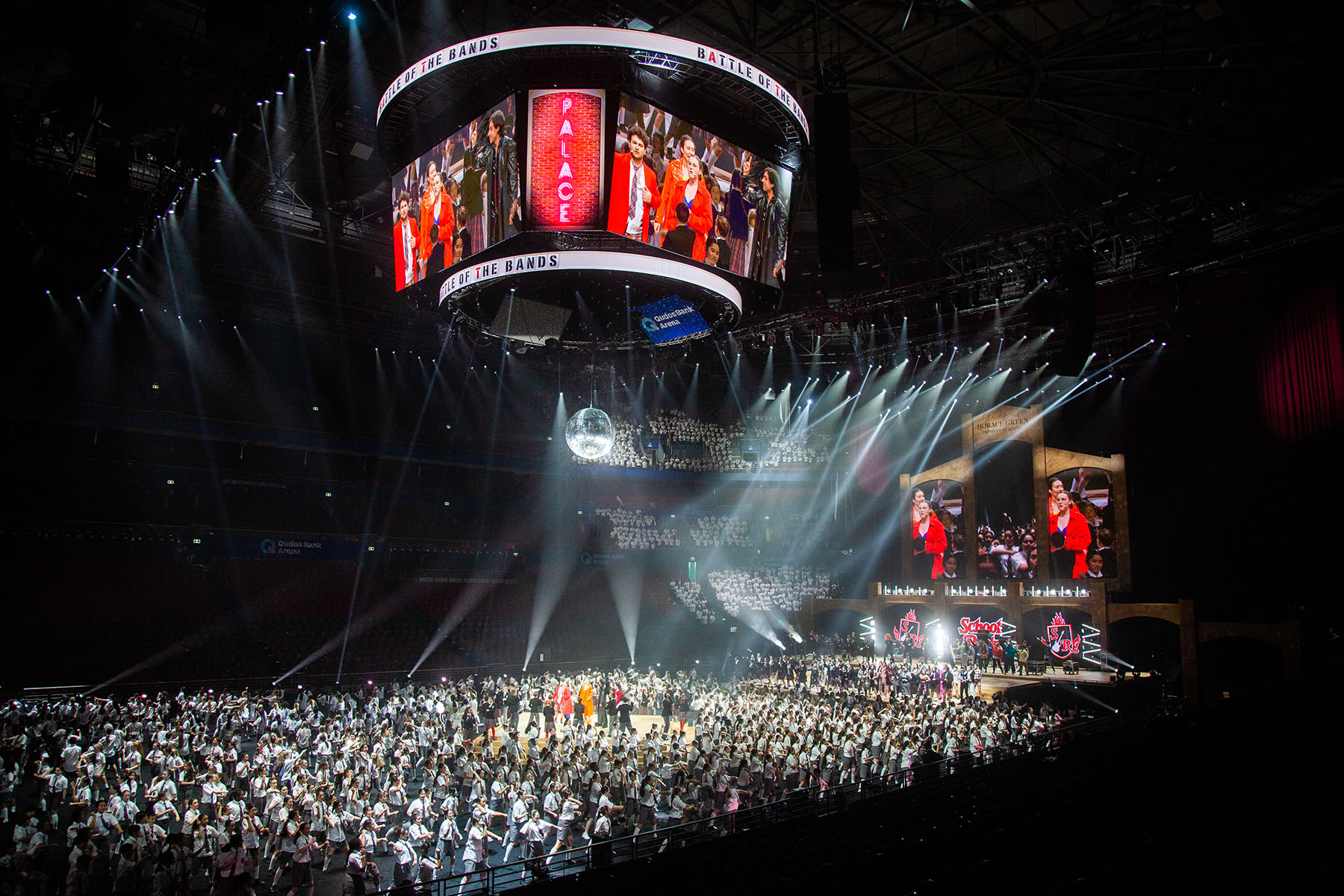 The stage was designed with a 270-degree viewing angle, complete with a full choir at the back for some sections of the show, and a prominent ‘B’ stage in the middle of the arena floor for ‘rock out’ moments, so Mark needed multiple follow spots.

He thought it was a perfect time and scenario to specify four Robe RoboSpot systems to run 12 x BMFL FollowSpot moving lights.

The 12 x BMFL FollowSpots were paired with four RoboSpot BaseStations each running three fixtures, all supplied by Sydney based lighting vendors, Chameleon Touring Systems, and Mark was delighted with the results. 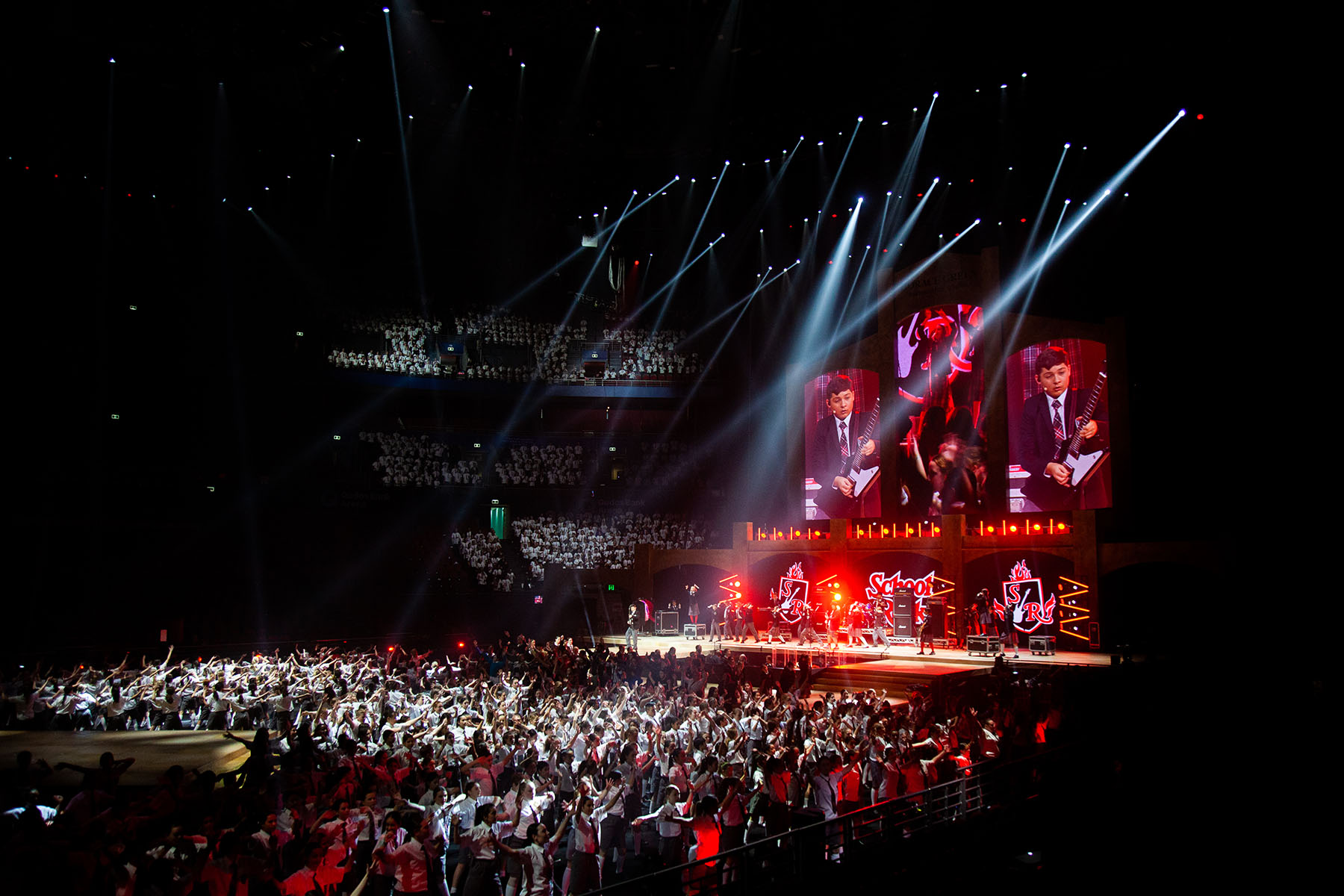 He often uses Robe products on his shows, but this was the first time he had spec’d the remote follow system, although he admits to being impressed with it since one of the early Australian demo sessions presented by distributor Jands back in 2018.

“Follow spotting was vital to this show and with a 19 / 20 metre trim height I needed really bright units – and lots of them – so this was a ‘must-have’ on the lighting plot,” he explained.

Using RoboSpots was not only “significantly easier” for Mark operationally than calling 12 individual manually operated follow spots, but it was also hugely quicker and more practical for the Chameleon crew to rig the 12 x BMFL fixtures and set up the four base stations which were backstage to the rear of one of the arena’s vomitory entrances.

The BMFLs were all front spots, positioned on the ends and at the centre of the advanced truss which was above the audience just in front of the downstage edge of the main stage. 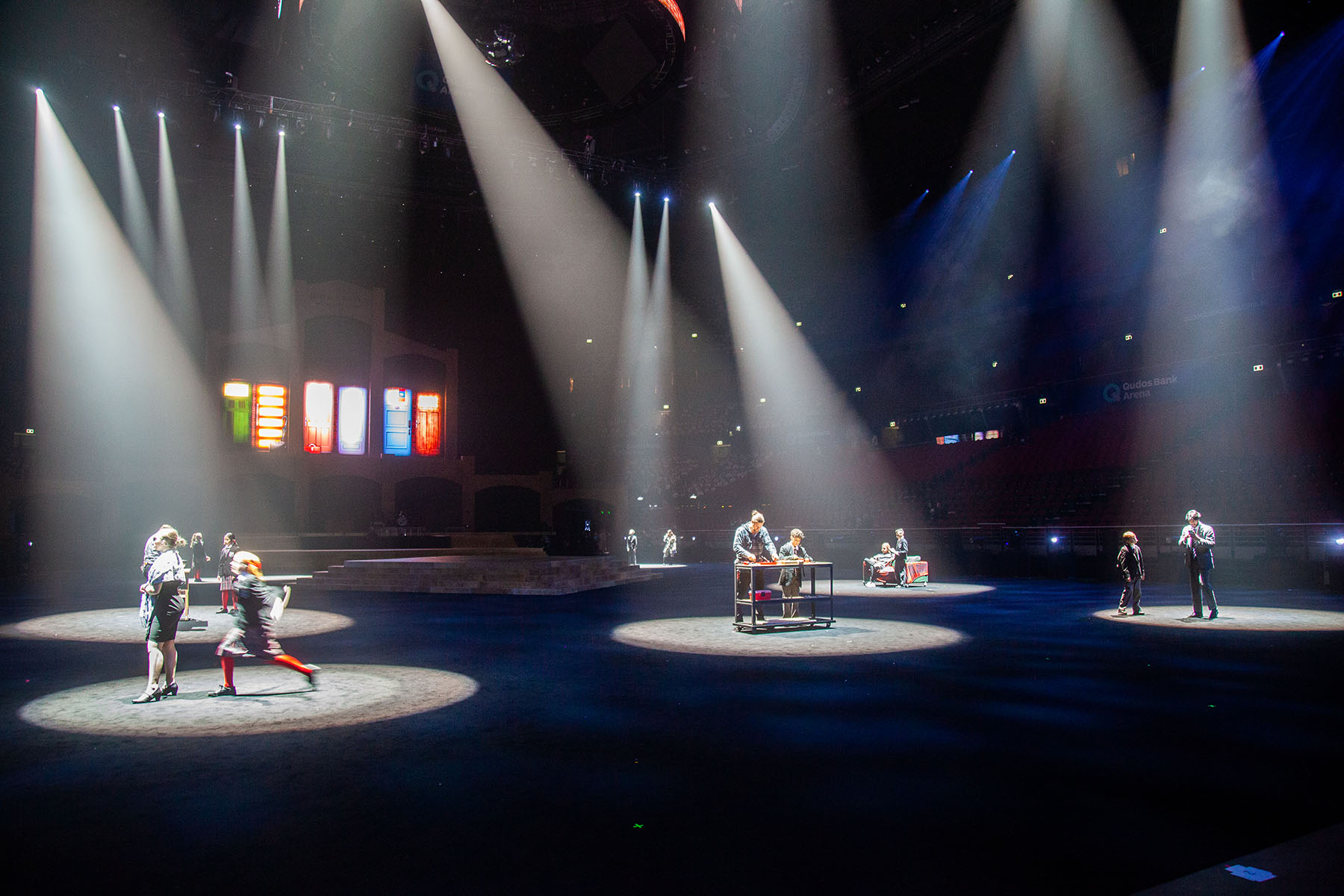 This allowed Mark to track the principals from multiple angles wherever they were as they moved around the stage and out in the arena to the B-stage. Having three spots on each person eliminated facial shadows and brought a palpable depth and precision to the lighting that made the actor’s pop out beautifully from all the background action, glowing and resonating in the high quality BMFL light output.

Mark retained overall intensity and colour control from the main lighting console with the RoboSpot operators taking care of the pan, tilt, zoom and iris parameters from their BaseStations.

While the operators were all initially unfamiliar with using the RoboSpot system, they were all experienced analogue follow spot operators who picked up the RoboSpotting quickly and easily.

“RoboSpot met my expectations and in fact went way beyond,” noted Mark with a large grin, “Many creative things are unlocked by using this system that simply aren’t possible when dealing with one flat beam of light.” 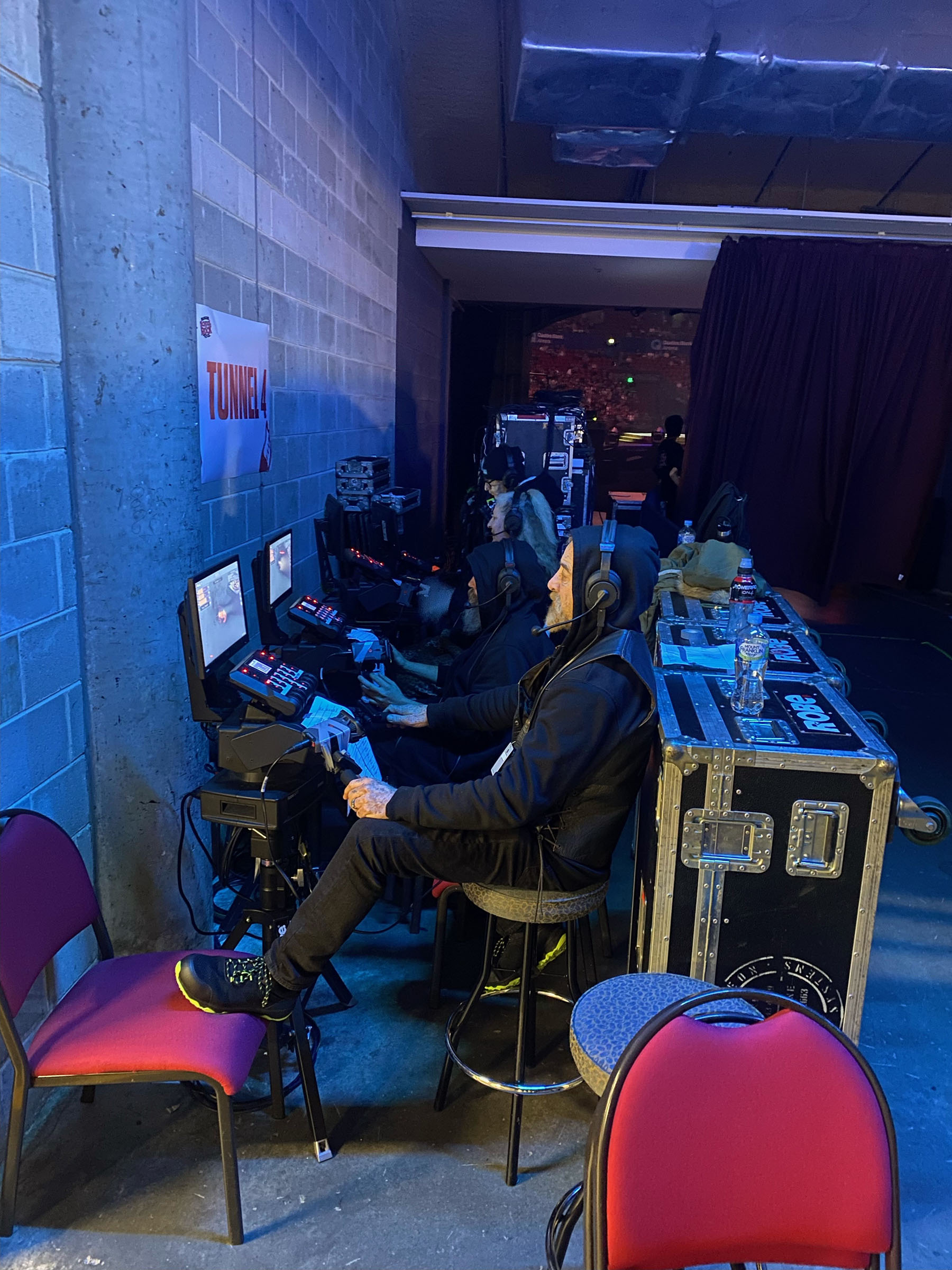 He appreciated multiple other advantages like the BMFLs’ good range of CT whites, which were mostly running at the warm end of the spectrum, and also the smooth movement.

The main challenge with lighting the show – which follows the fortunes of wannabe rock star Dewey Finn posing as a substitute teacher at a prestigious prep school … and transforming a class of straight-A students into a badass rock band – was the tight timeframe for getting the show lit and programmed.

The fact that setting up and running 12 follow spots was made so straightforward by utilising the RoboSpot system greatly assisted in this, leaving Mark with more time to concentrate on being creative, getting cues into the desk and other more time-consuming elements of a very pressurised tech period. 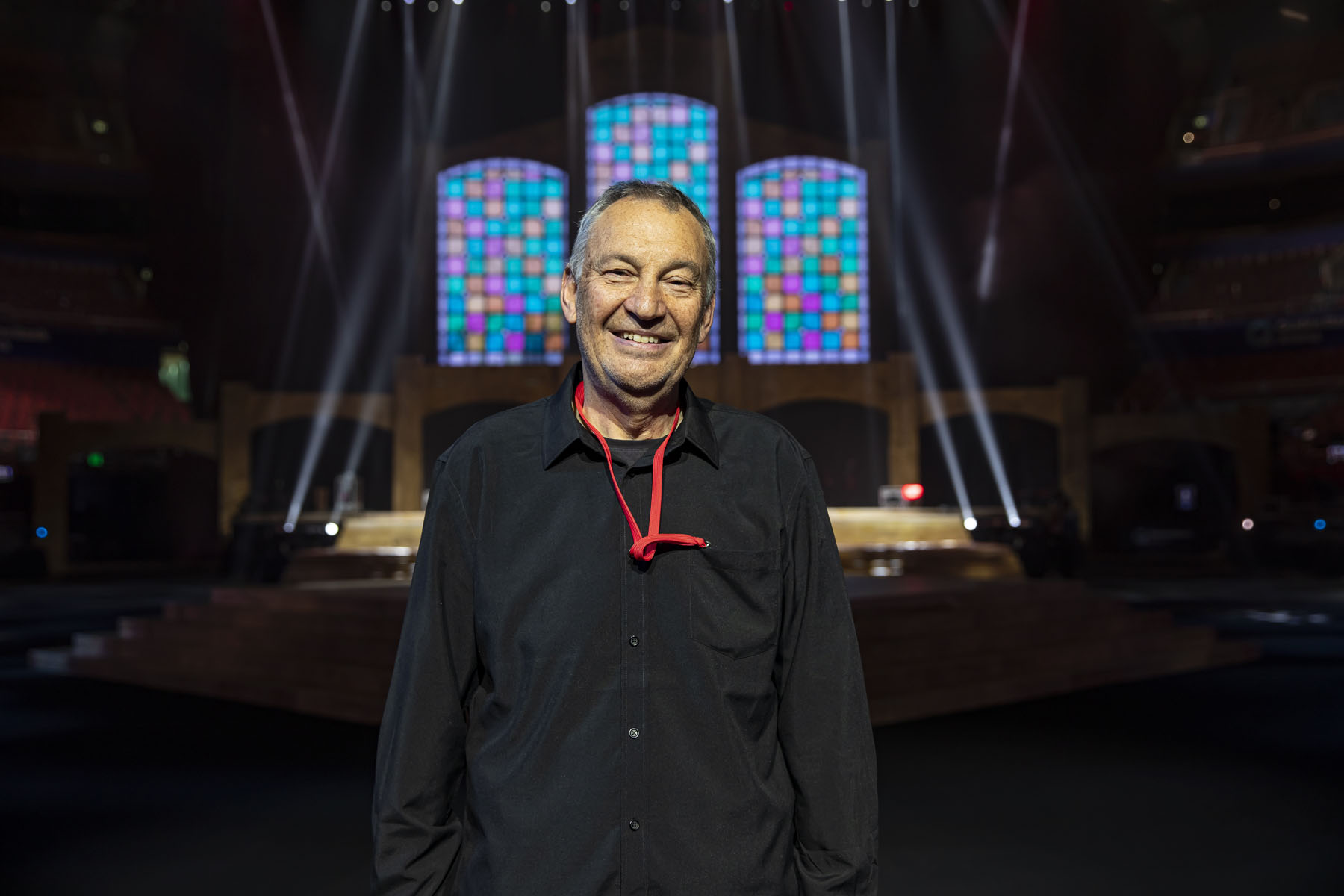 “It’s hassle-free to cue the system and I’ll definitely be using it again!” he concluded, adding a big THANK YOU to the “amazing” Chameleon crew, who were chiefed by Anthony Carlon.