The 10,000-seat capacity Bilbao Arena this year for the first time hosted the 2022 FIBA Basketball Champions League Final 4 season-ending tournament with over 100 Robe moving lights highlighting the action for a venue packed with enthusiastic basketball fans plus ahuge televised audience. 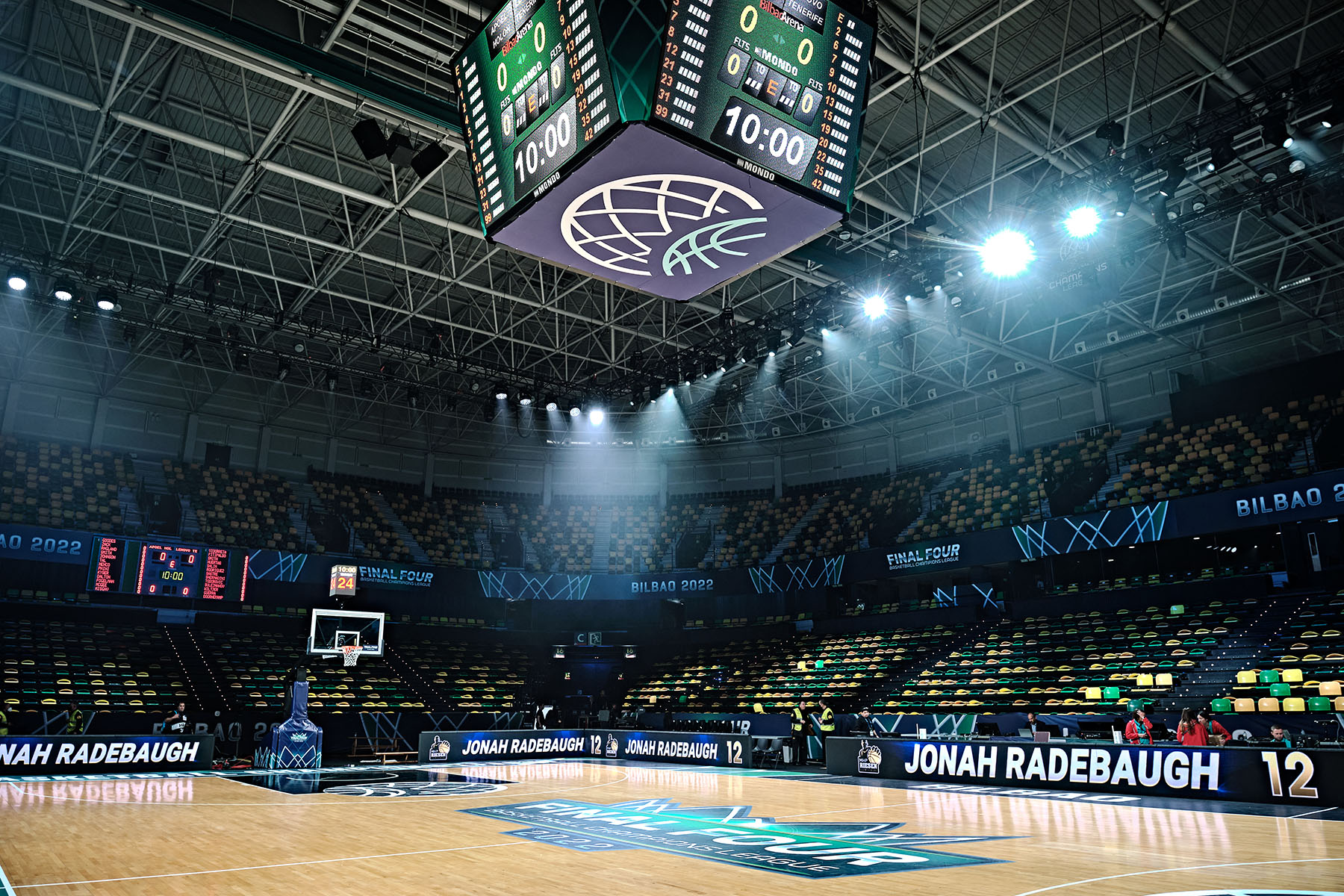 In charge of co-ordinating lighting for the event was Iker Gartzia from one of the region’s leading rental companies, Abs Fluge Euskadi S.L (Fluge) which was the official supplier of lighting, sound, and video for this high-profile event. They were working directly for FIBA.

The various lighting requirements had to cover several bases. The tournament’s opening event took place at Bilbao’s famous and spectacular paean to modern art and architecture, the Guggenheim Museum, while all the sporting action and the closing ceremony were at the Arena.

Lighting inside the venue had to be flexible and well thought out for all the games and their broadcast requirements as well the ceremony.

Most important was great lighting for the playing area for live audience and TV and ensuring that the multi camera mix director had everything they needed to catch the best shots. Obviously, all the public needed to see the action, and the crowd themselves had to be lit for TV! The area around the players’ entrance needed a bit of razzmatazz, so that was another prominent focus of lighting together with a DJ booth set up above the players’ entrance corridor.

The chosen moving lights were 64 x BMFL WashBeams, 20 x Tarrantulas, 24 x MegaPointes, 24 x Viva, 20 x LEDBeam 350s and 12 x LEDWash 300s,most of which were installed on a series of trusses in the roof above the field of play.

The 64 x BMFL WashBeams had to illuminate the basketball court,andthe main reason they were chosen was for the power and quality of light together with the framing shutters which enabled the light to be directed in exactly the right places. It also allowed Iker and the lighting team to eliminate unwanted overspills. “It absolutely had to be this fixture and no substitutions,” stated Iker.

The Tarrantulas were similarly picked for their brightness and potency. They had to cover primary lighting next to the baskets and reinforce the work of the BMFL Blades.
The main task for the MegaPointes and LEDBeam 350s was lighting the public. They were used for beams and high impact effects and looks all around the Arena and “both types of fixtures were ideal with their fast movement,” noted Iker, adding that they also complemented one another very well.

The Viva’s were positioned on a cantilevered structure above the players’ corridor throwing light along the void and supporting the DJ who played whenever the players hit the court to ratchet up the excitement and anticipation.

The LEDWash 300s rigged around the back of the DJ booth and were chosen for their bright output and small size making them perfect as backlight fixtures for the DJ sessions.

The biggest challenge was in lighting the court area well and to everyone’s expectations. The Final Four has strict lumen requirements and everything needed to be spot on. While this was a massive task, it was one made “infinitely easier thanks to having the BMFLs,” explained Iker.

As the main project manager of a crew of seven,co-ordination and logistics were also a major part of the project. Iker and many of the Fluge team had worked in the venue before, so this knowledge was extremely helpful in assisting a slick and smooth production operation.

“Having this great selection of Robe fixtures meant we had all the lighting adaptability and firepower needed to meetand exceed everyone’s demands,” he concluded. Fluge’s large stock of Robe products has been delivered by Spanish distributor Earpro&EES.

Adrián García and Carlos Cirre were the lighting programmers with Adrián also taking on the role of lighting crew chief.
The 2022 Basketball Champions League (BCL) was won by Lenovo Tenerife for the second time, who beat another Spanish team, Baxi Manresa, in the final match.