This year Outline was the protagonist of a demanding challenge that involved the sound installation of the FOROF space managed by Giovanna Caruso Fendi. A site located in the heart of the Capital, inside the historic Palazzo Roccagiovine, and intended to host exhibitions and events. A two-level space characterized by hypogeal rooms with colored marbles and the flooring of the Basilica Ulpia in addition to the remains of the eastern apse. 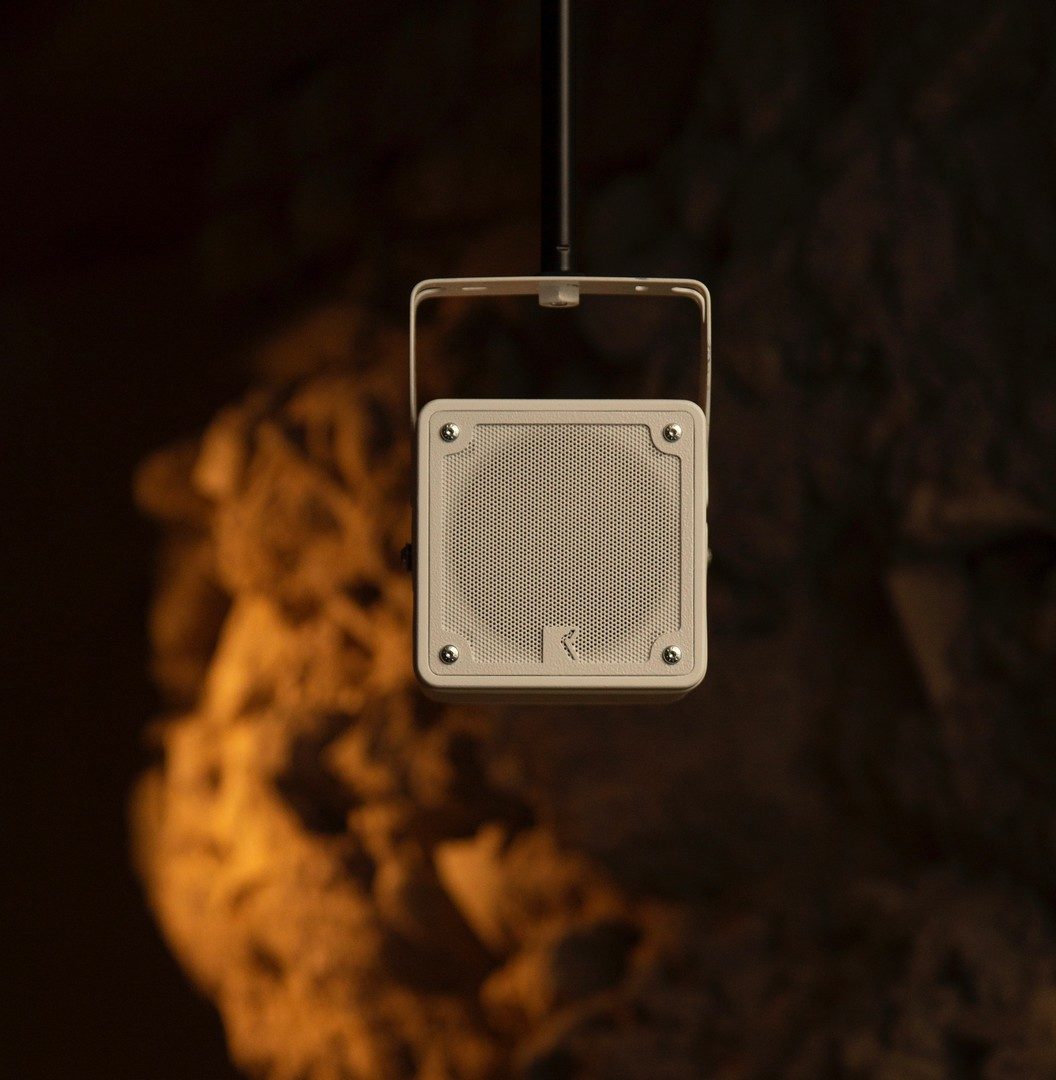 The LOVOTIC installation, which actually inaugurated this new space, was a clear representation of a particular and harmonious combination of archaeology and contemporary art. Moreover, the transition from the upper level of the structure, which is predominantly exhibition and modern, to the lower level, which wraps visitors in a dimension of pleasant rupture, gives the feeling of being transported through time on a journey of pure experimentation. 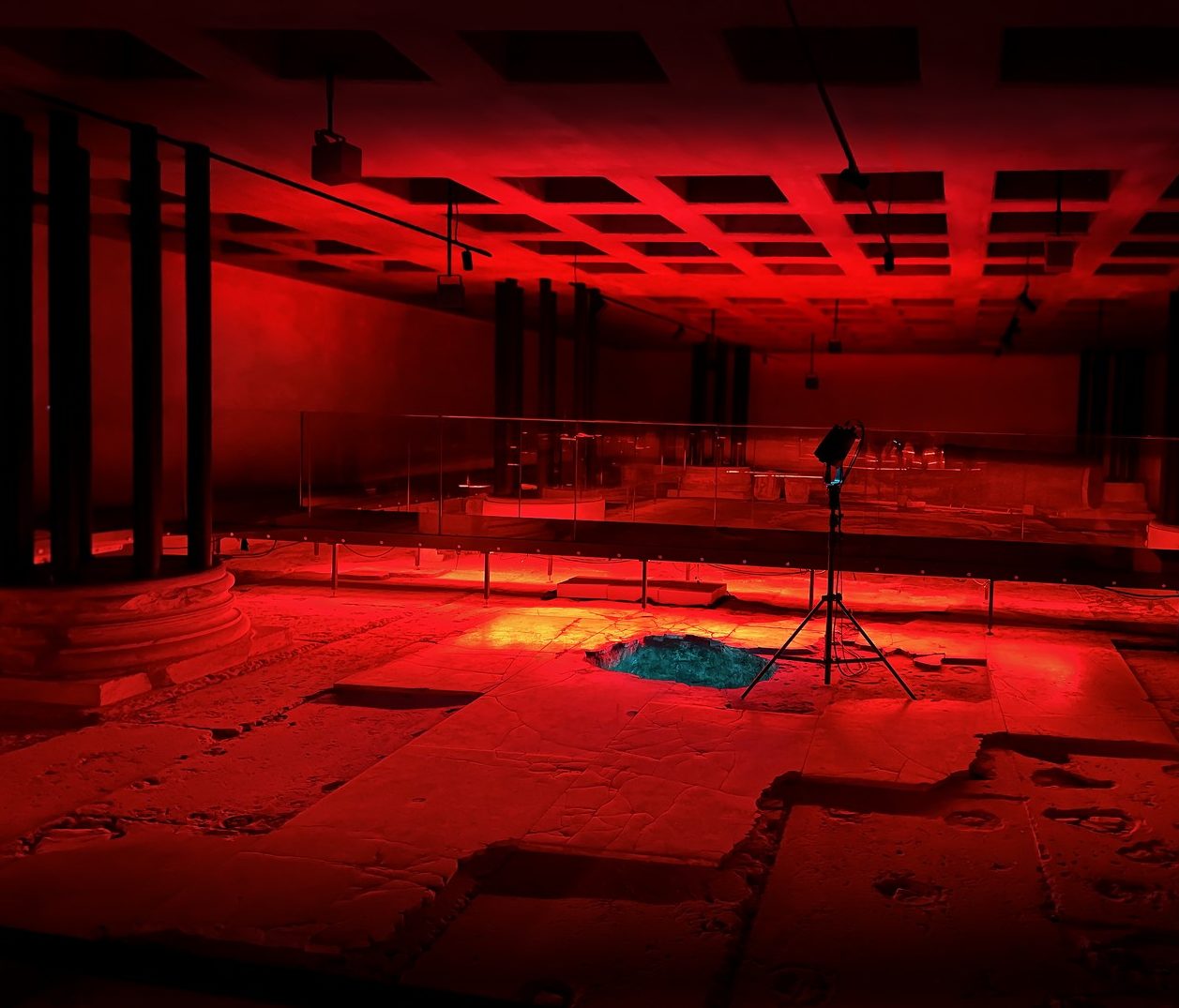 The installation involving Outline technologies was created by Soundwalk Collective, giving rise to a site-specific sound installation in dialogue with the archaeological space that is extremely minimal in respect to the millennia-old setting. Giovanna Caruso Fendi with her guests during the opening

Soundwalk Collective is an experimental sound collective founded in New York City by Stephan Crasneanscki, who was joined by Simone Merli in 2008. Currently, the Collective operates in a constantly rotating constellation of sound artists and musicians. Its approach to composition combines anthropology, ethnography, nonlinear storytelling, psychogeography, observation of nature, and exploration of recording and synthesis techniques. The source material for its works is always related to specific places, natural or man-made, and requires long periods of study and fieldwork. The Wall Types that accompany the pathway bear phrases by Paul B Preciado, recalling the idea of a post-sexuality that drives visitors deeper and deeper into the heart of the exhibition. Natural light is replaced by darkness, interrupted only by reddish artificial light installations that accompany the guiding voice of Charlotte Gainsbourg. This deliberately interferes with those of Willem Dafoe, Lyra Pramuk, and AtomTm. The result is a nonlinear discourse on love themes that brings together all human knowledge about Eros. All this is enriched by some metal plates, post-archaeological relics that tell the synthesis of human knowledge about sexuality.

LOVOTIC also indicates the blending of human and machine, with narrative voices intersecting and being reprocessed by an algorithm, resulting in a composite unprecedented language somewhere between human and robotic.

And in this “stargate” to a new interpretation of Love, Outline products, combined with careful sound design, were able to accompany the visitor into a dimension where nothing was left to chance.

The Italian company was involved in June last year as a technical sound sponsor, and it was an opportunity to showcase the sound and design qualities of the new Architectural Series, consisting of the Ai41 column loudspeakers and related AS6 subs, as well as the compact but powerful Charlie 4s. A solution that best expressed the concept of immersiveness desired by the artists.

“The audio program played is quite peculiar: experimental, ambience, abstract and minimal electronic music alternating with whispers, rants referring to the theme of the exhibition,”  explains Pierfrancesco d’Aloisio, System Engineer at Outline who oversaw the entire project. “The whole underground area has been sonorized in order to capture the interlocutor and guide him through the path.”

The macro area was divided into small zones with a corridor connecting small rooms or alcoves, each of them with works of a different nature (sculptures, paintings, etc.), and then ending in the large underground hall of the archaeological excavation. The sound designers’ idea was to have an immersive experience with a multi-track program so almost all the speakers had their own exclusive signal. 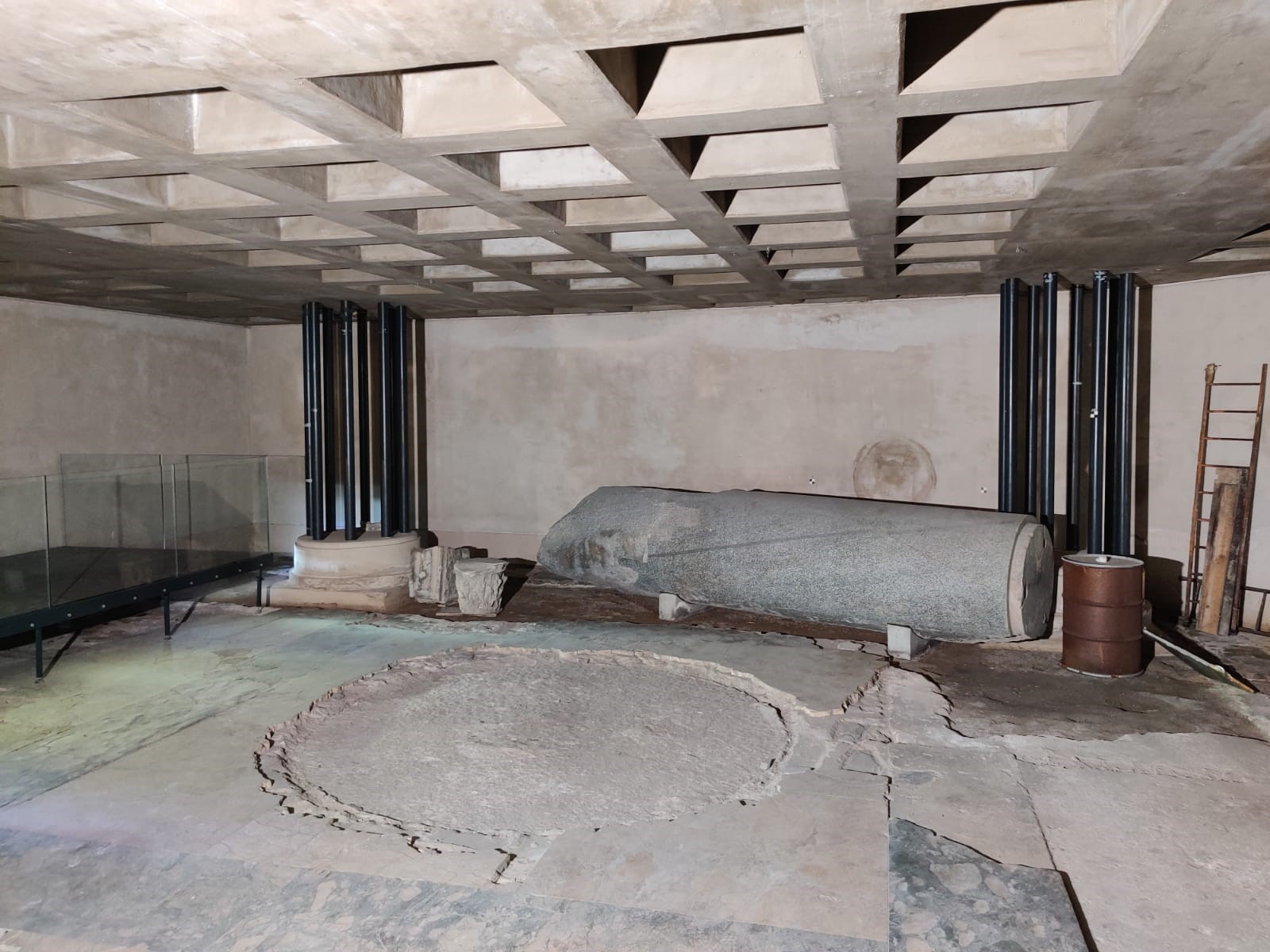 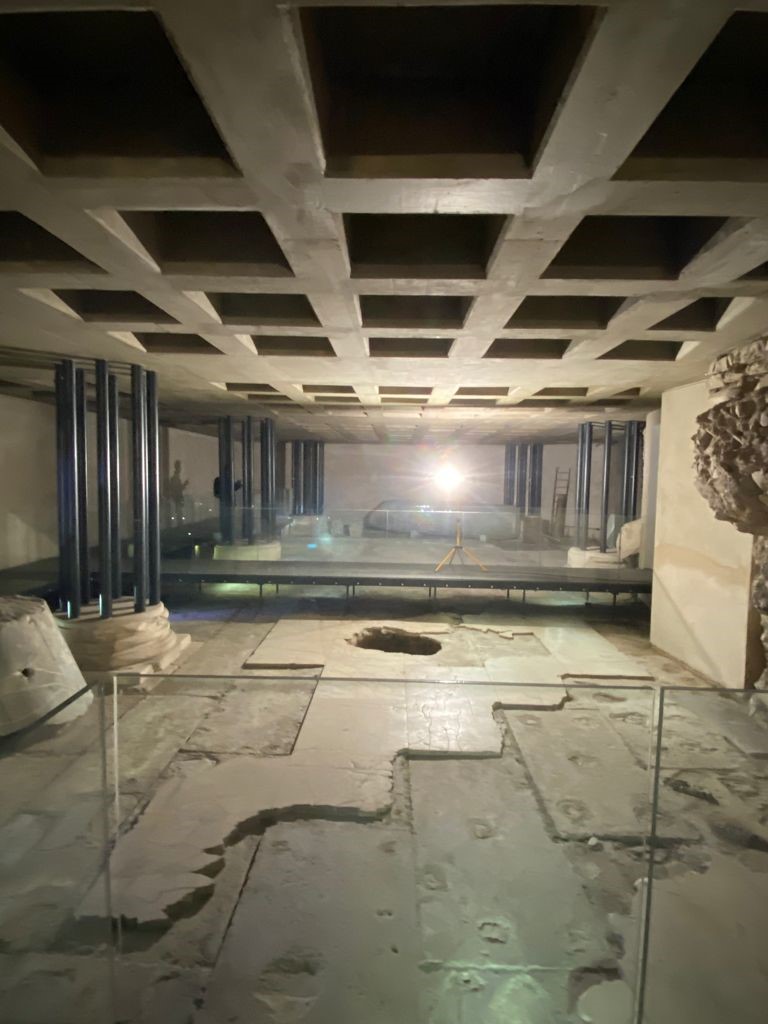 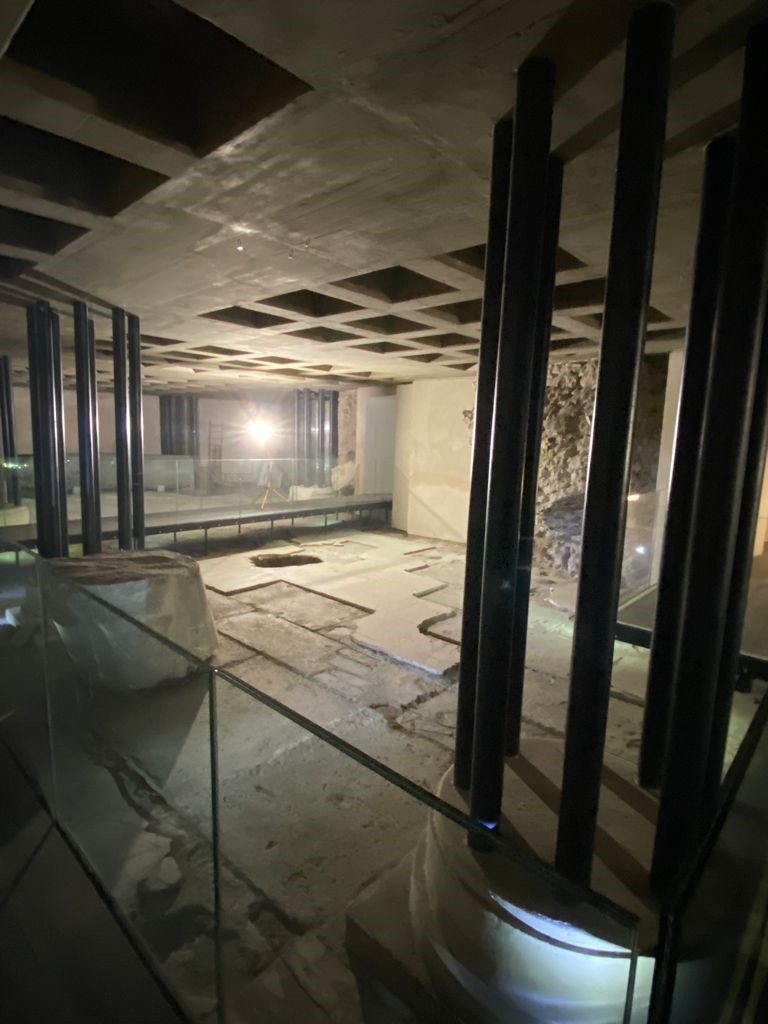 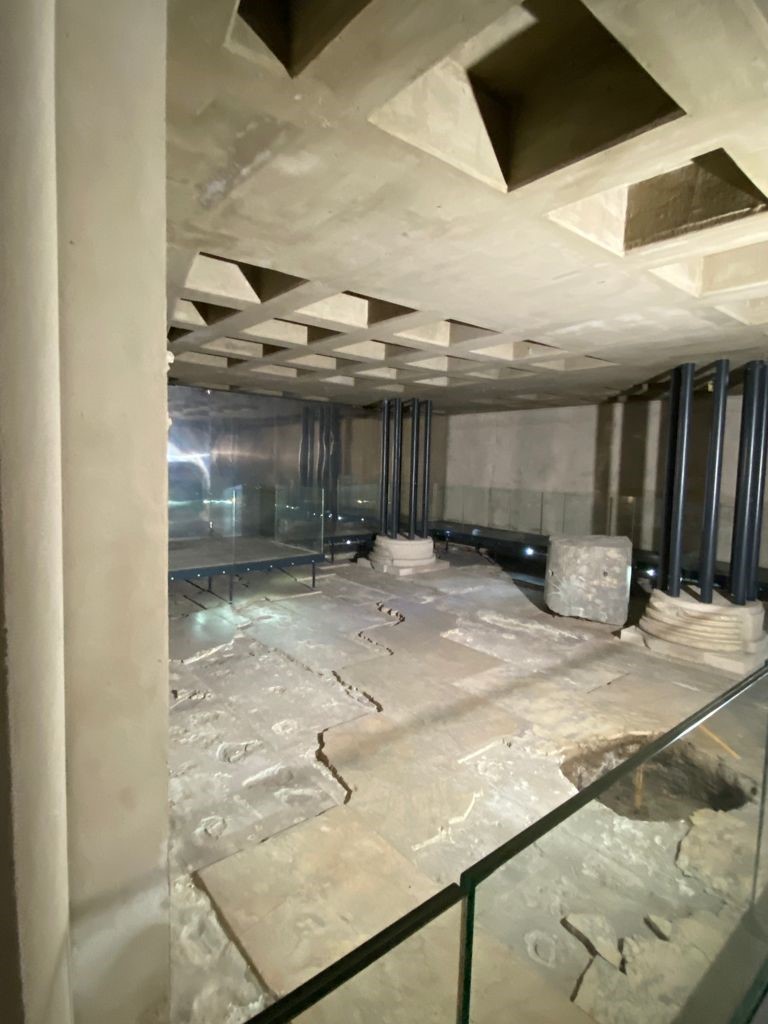 There were 12 processing signals thanks to the 6 Outline L3000 power amplifiers driving a total of 6 Ai41, 9 Charlie 4 and 10 AS6 subs. Speaker positions were discussed and verified using Outline’s proprietary acoustic prediction software Openarray 3D.

“Before defining the final location, we discussed what were the requirements and the effect we wanted to achieve and then convey to the public,” continues Pierfrancesco. “The first version of the project envisioned a ‘mixed’ use, with a combination of Ai and Charlie 4 columns. After various developments of the project we came to the conclusion to use 9 Charlie 4’s in the archaeological excavation while 6 Ai41’s were used in the antecedent area with the works and in the corridor.”

The speakers were chosen on the basis of the program to be reproduced in the various spaces, with the control of the vertical directivity of the Ai41 columns guaranteeing an excellent result given the low ceiling height and the size of the spaces. In addition, the columns ensured almost zero visual impact due to their size and shape, a prominent feature of this loudspeaker system, without compromising the typical sound quality of Outline products. The area before the excavation was more illuminated, so it was necessary to consider an extremely discreet visual impact that helped “hiding” the systems.
Another feature is the possibility of mounting them very easily on the wall through the two through holes in the front of the cabinet, and then hiding the attachment with the magnetic grille, becoming in fact almost invisible. The archaeological area, where the Charlie 4s were used, also required more sound pressure. In this location there was no possibility to mount the Ai on the wall, so it was decided to install all the Charlie 4’s on rods fixed to ceiling cubes and placed at different heights, oriented towards the walkway in order to achieve proper uniformity and homogeneity. Something that cannot be achieved with the Ai. Moreover, thanks to the conical directivity of this loudspeaker equipped with a single 4″ driver, Outline was able to focus the sound wave within the area concerned with remarkable, almost unexpected definition and clarity. Outline A Series: AS 6 Ultra-Slim subwoofer

The AS6 subs were positioned under the walkway along the archaeological excavation and in the corridor. The only exception was a sub at the entrance, which was mounted on the ceiling facing downwards, again using the through-holes of the box, as for the Ai. “It has to be said that we did a lot of work with the artists before arriving at the final positions, rehearsing on site with various placements, then choosing the solutions that turned out to be most efficient and technically correct,” – comments Pierfrancesco.

In terms of calibration, the various Ai systems in the corridor were aligned separately, with minimal equalisation (two/three filters). This is also thanks to the 0.7″ treated silk dome tweeter, which guarantees high definition and intelligibility.
Inside the archaeological excavation, the configuration and layout of the system in no way allowed for alignment, but since all the loudspeakers reproduced different uncorrelated signals, the obtained result was extremely pleasant. Thanks to the definition and balance of the Charlie 4, very few equalisation was needed. “Soundwalk Collective was particularly impressed by the result, and that’s what we were interested in achieving, given the sophisticated and sophisticated artistic choice that needed faithful reproduction systems to give the effect that was imagined and created, especially in contexts where design and aesthetics are particularly important and there is a tendency to downplay sound quality,“concludes Pierfrancesco.

LightSoundJournal had the opportunity to speak with Giovanna Caruso Fendi, in order to gather some thoughts on the outcome of the event.

LightSoundJournal.com: What were the basic requirements related to the sound system of the installation?

Giovanna Caruso Fendi: The installation of Outline’s technical products could not disregard the absolute respect for the archaeological area of the Basilica Ulpia on the underground floor of the FOROF spaces. The archaeological remains of absolute historic-artistic importance were enhanced by the presence of a high-performance sound system that enabled the creation of a dialogue between archaeology and contemporary art, embracing FOROF’s mission.
For Lovotic by Soundwalk Collective, it was also necessary to coordinate the light and sound installation according to the artists’ specifications to create an immersive experience for the audience. LightSoundJournal.com: What made you decide to choose Outline for the installation?

Giovanna Caruso Fendi: The choice of Outline as sponsor was determined not only by the quality of the technical products on offer, but also by their professionalism and availability. Moreover, Outline had already collaborated in the past with Soundwalk Collective, the experimental sound collective on show during the first season of FOROF, helping to convey their ideas of cooperation and artistic collectivity through site-specific installations.

LightSoundJournal.com: How do you assess the outcome of the installation on the artistic side and from the point of view of the final result?