Classic and crossover violinist David Garrett is a unique, interesting, and fun artist to light requiring a mix of treatments inspired by multiple visual genres, which is one of the many aspects – and challenges – relished by lighting designer Gerard Maijenburg who has worked with him for the last seven years. 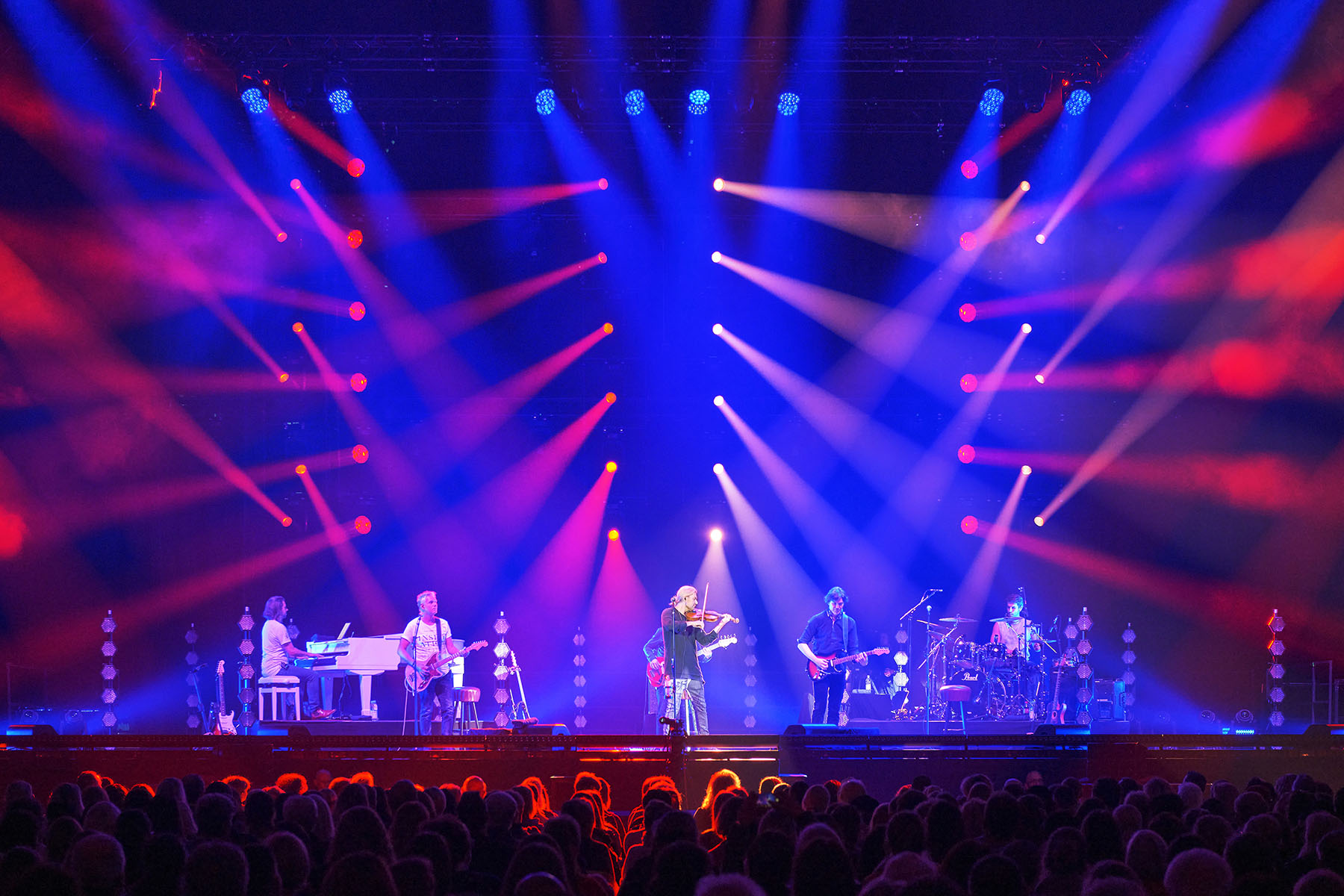 The European leg of Garrett’s current “Alive” tour featured over 200 Robe moving lights, picked by Gerard to energise his design.

The creative process for developing the tour’s lighting ambience started with discussions with David who wanted a rock ‘n’ roll style wall-of-lights upstage of his band. With a classic black back cloth behind that and no video onstage, just two left-and-right IMAG screens, lighting was the primary visual medium utilised to establish all the emotion, atmosphere, and connections with the audiences.

Ninety-two Robe Spiider LED wash beams were combined with 36 x ESPRITES all rigged in six vertical lines at the back, producing the high power hi-impact back wall. These were complemented and contrasted with eight clusters of four spider ‘pods’ positioned on the front and mid trusses which provided the main stage washes. Both these elements combined brought a kinetic flow to the stage during specific lighting sequences.

The Spiiders and ESPRITES provided multiple WOW moments and beam architecture and looks in combination with 18 x Pointes which were on rear and mid trusses together with 14 x BMFL Blades and 10 x MegaPointes deployed behind the lighting ladders used for blast-through scenes. 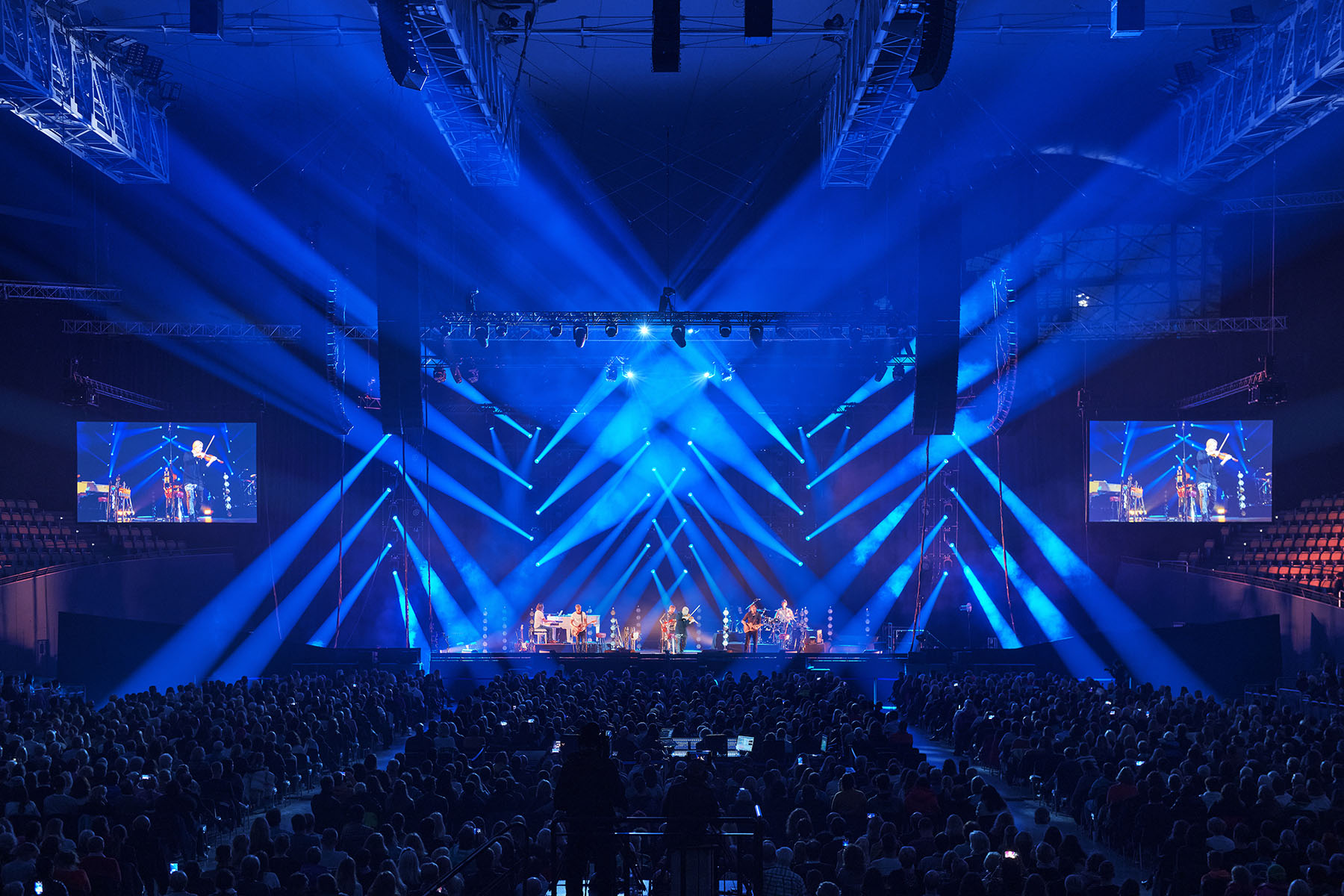 Gerard devised a series of go-to patterns for all these effects fixtures that worked in conjunction with the ESPRITES and the BMFLs, adding multiple layers of depth to the performance space.

Fifteen Tetra2 moving LED battens were positioned along the front of the stage and used as a front curtain of light and other effects sweeping into the audience. Gerard thinks the zoom on these is a “brilliant” effect that transforms a standard moving LED batten into something “seriously more versatile”.

All these luminaires were picked and carefully crafted into the show as part of his almost cinematic ‘painting with light’ approach.

Another six BMFL Blades on the front truss worked with the Spiiders to reinforce the overall stage wash.

Striking geometry and liquid effects that flow with colour shifting and beam-work were a cornerstone of the show, encompassing the rich, textured, and vast dynamic range of David’s music. 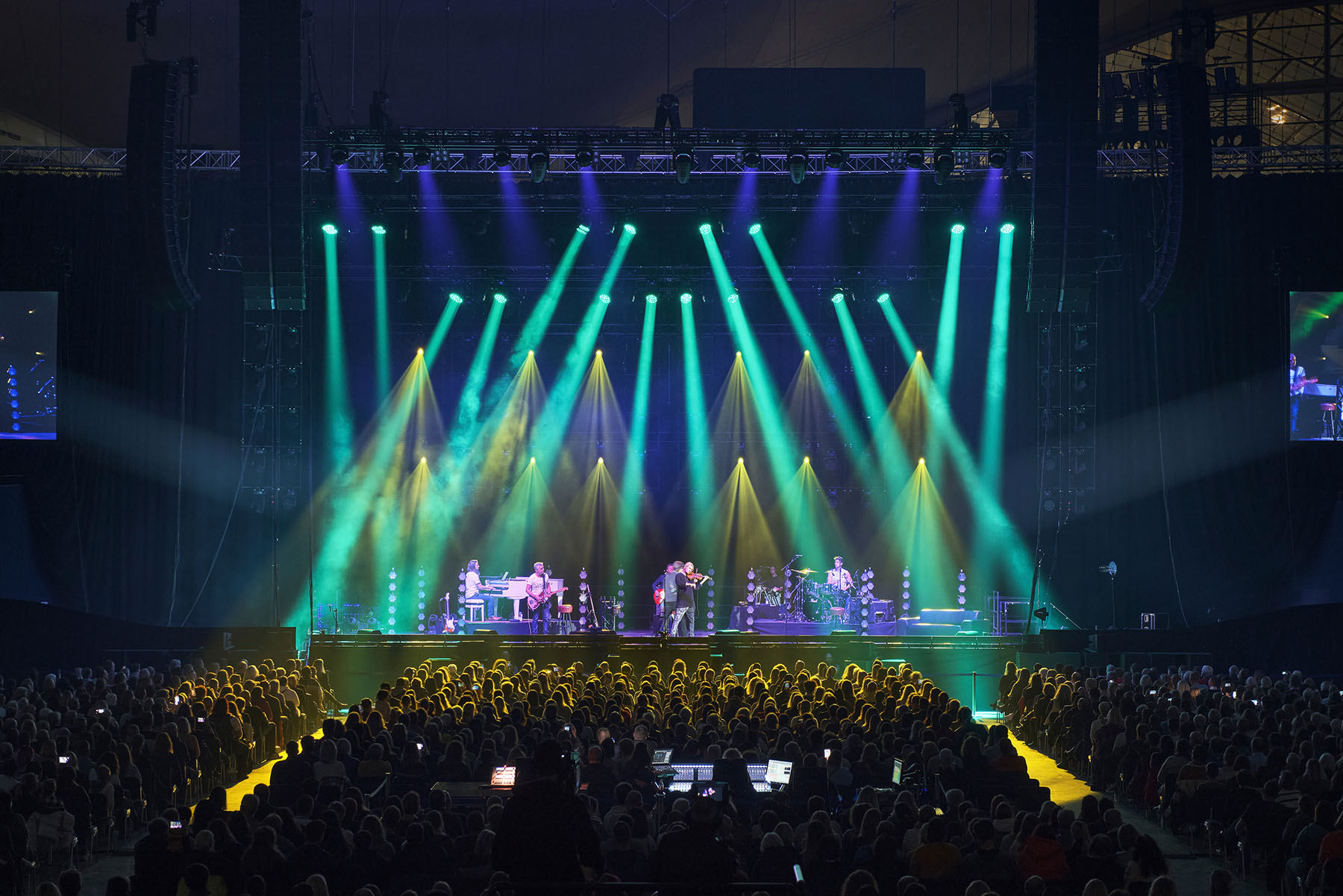 With 25 pieces in the set, Gerard had 190 positional presets in the Avolites D9 console and a key to delivering the high impact light show was riffing with the music and feeling the rhythm. “I need a keen ear to pick out the details of what are often very intricate compositions, and the lighting has to range from the empathetic, delicate and wistful to the BIG, bold and bombastic!”

He was assisted in creating the timecoded show by programmer Kristian Vloet. They pre-programmed in Capture and sent it to the artist, who asked them to tweak only one song, which was a result as Gerard explained that he takes an extremely active role his stage presentation.

One number – Beethoven’s Symphony number 7 (second movement) – is performed completely in the dark for dramatic impact and to enhance concentration. 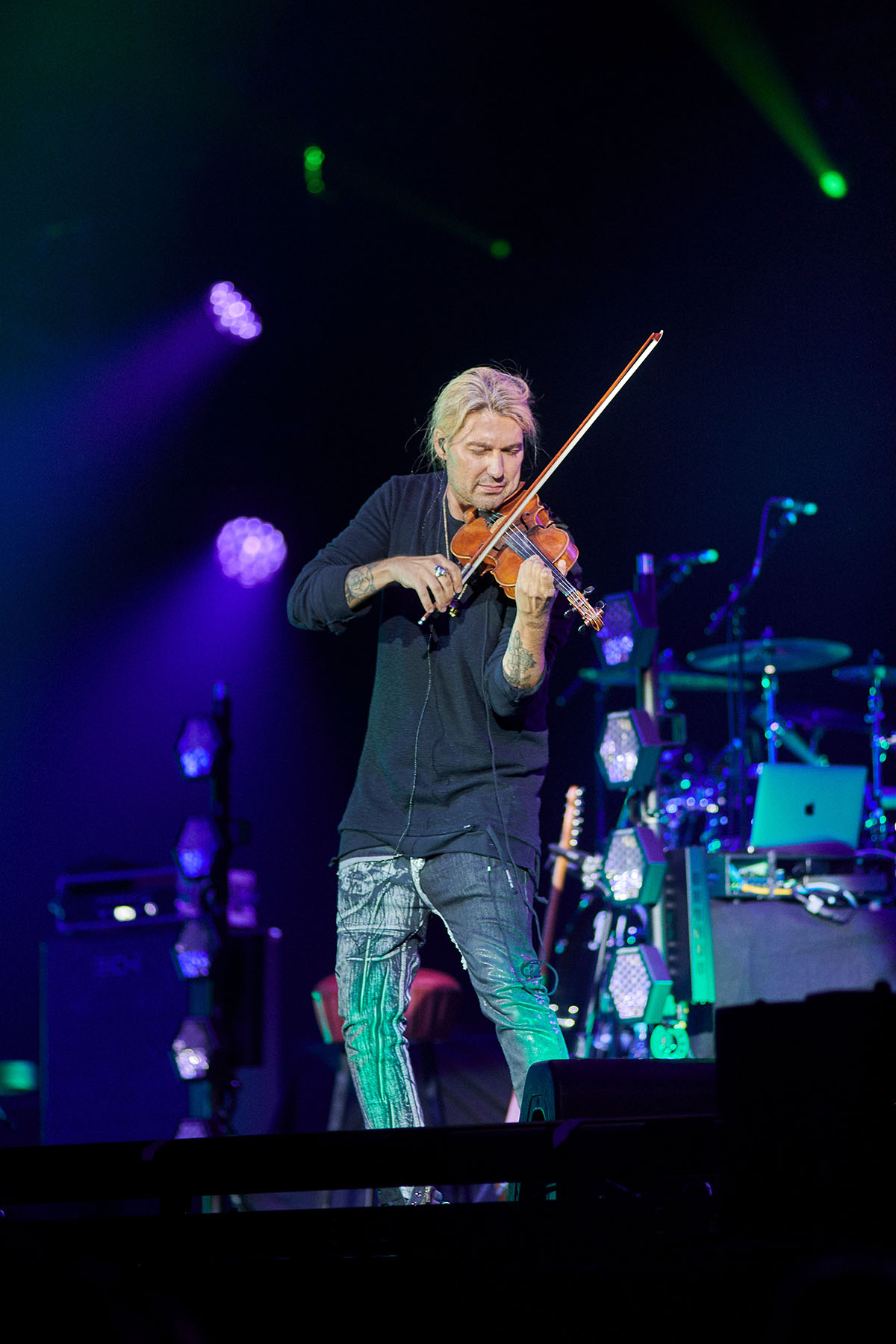 “He knows and expresses what he wants and is a very nice person to deal with,” commented Gerard, noting that the artist comes from Aachen, a cosmopolitan German city right on the border with Belgium and The Netherlands. He enjoys working with an international crew and Gerard was joined at FOH by sound engineer Dick Scheepbouwer who is also Dutch as is monitor engineer, Rimmert Van Lummel.

Gerard chose to work with a large Robe rig because he likes the consistency and continuity with elements like colour mixing that the different types of products bring to a lighting design.

“The Robe kit makes me look good, and apart from that is generally very reliable and available in most countries around the world!” he stated. The European leg is followed by a Latin American stint where they will be picking up local productions, so having a brand source-able and strong in that region was a big consideration. 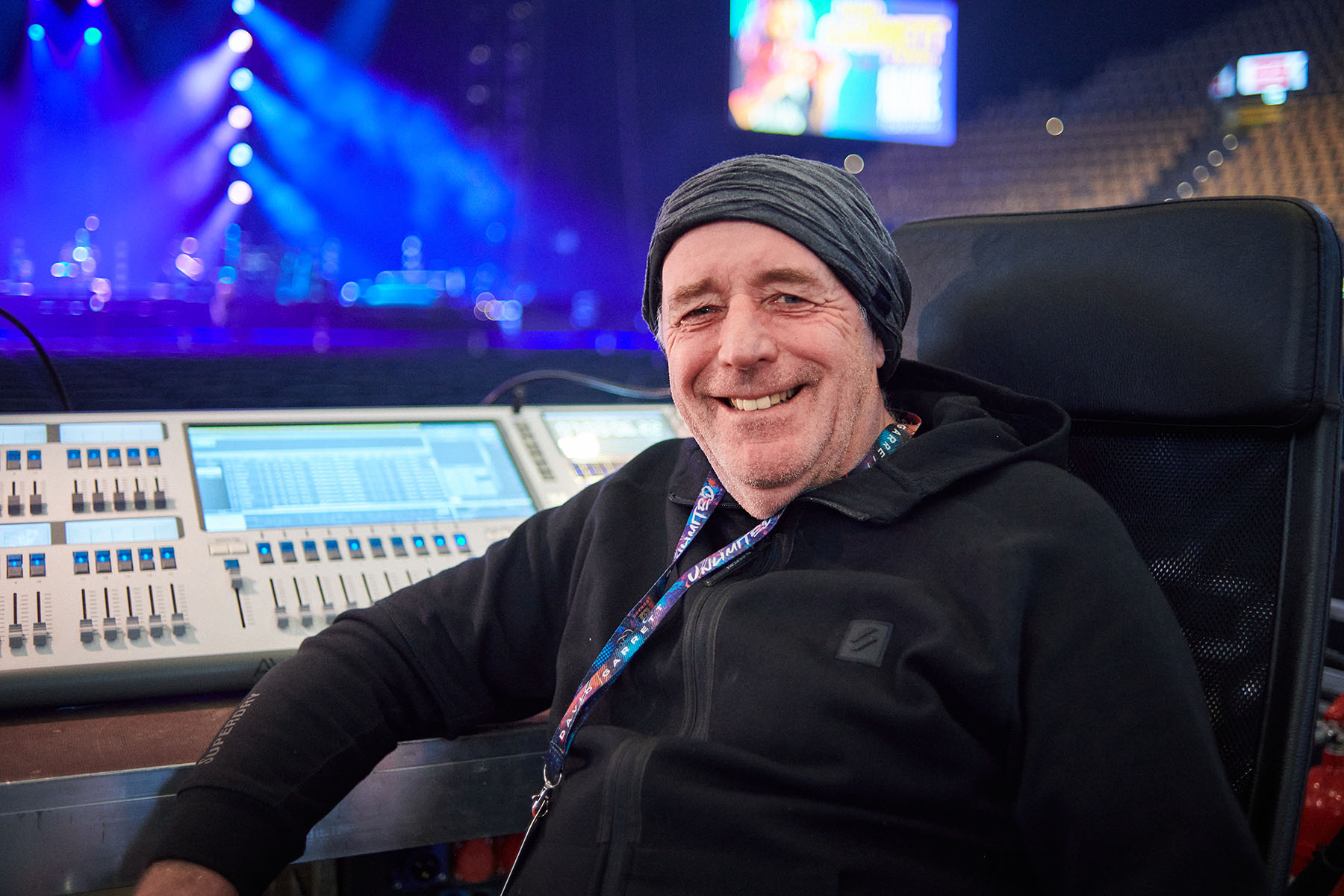 Equipment for the bulk of the European tour which was in Germany, Austria and Switzerland was supplied by rental company Black Box from Berlin, with other companies involved in Italy, Greece, and other countries. They have been lucky enough to play some special places and spaces as well including a very magical concert at the base of the Acropolis in Athens.

Like everyone, Gerard is loving every moment of being back on the road again after two years of pandemic restrictions.