Way back in 2009 Liam Halpin, owner of Datasound Consulting Ltd, had a clear vision for the processor he needed but could not buy: “I’d created a detailed specification, even drawn a front panel, and showed it to a number of leading pro-audio manufacturers but no-one could see its potential or was willing to put in the R&D effort needed to make it a reality”, he recalls. “Then years later I had Newton explained to me long prior to launch and immediately thought, that’s exactly what I’m looking for!

“I first used one on a Sam Smith tour in 2018, and then wanted it on Tool in 2019. The vendor didn’t have it in inventory but once we’d worked out how many of their stock processors we’d need to do the same as a single Newton, two were quickly acquired and, to be honest, I haven’t looked back – I’ve used a pair of Newtons with them ever since.”

In the meantime, Liam has also taken his expertise and custom drive rack out on System Of A Down and has just returned from a US tour with Alice In Chains / Breaking Benjamin.

He continues, “My role is that of consultant system designer and I work very closely with FOH engineer Alan ‘Nobby’ Hopkinson – in fact it’s now recognised that we often come as a pair! I design the PA for each venue so that it will perform the way Nobby wants it for each act, then my Newtons sit at the core of the system that makes it all work.”

“I have two which live at FOH, taking split feeds from Nobby’s Midas XL4, along with 3 other consoles, plus playback. They are ‘grouped’ together using the [Outline] Dashboard software, running in a mirrored configuration with their outputs feeding the amplifiers via Dante interfaces. This gives me full visibility of the entire network and also of what are effectively two independent signal paths for redundancy.”

“My system has actually evolved somewhat in that it now closely resembles the type of data structure you’d find in banks and financial organisations, in terms of its failsafe capabilities. I‘ve used lots of Dante to build fully redundant primary and secondary systems which are self-healing – they are prioritised but self-aware so that a broken link is instantly recognised and worked round if necessary.” 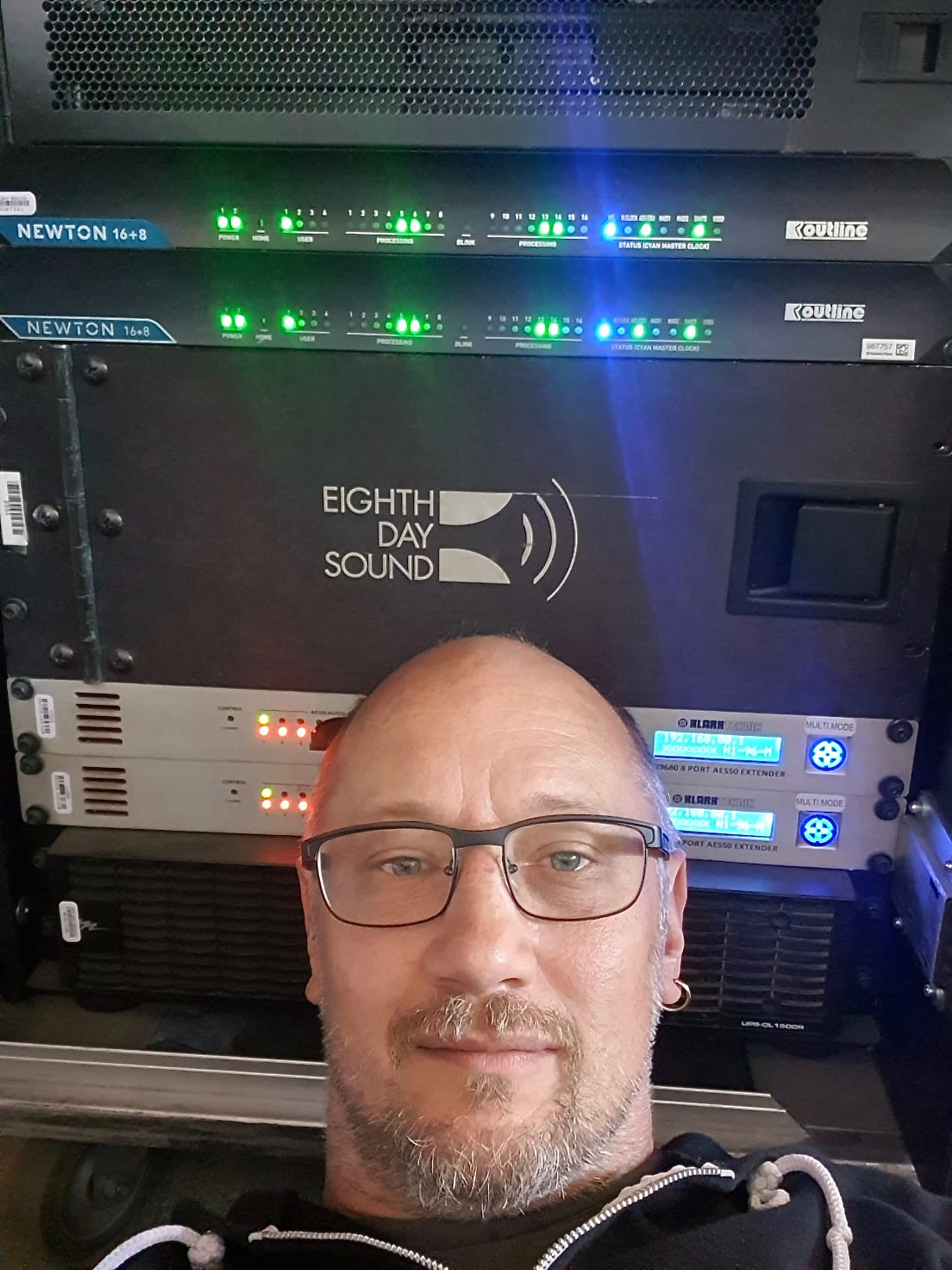 Liam Halpin with his beloved Newtons

Between tours Liam has been doing some one-offs and festivals without his own drive racks and “…I stood there just wishing I had my Newtons. I still stand by my original comment – NOT using them almost feels like a decision to make my life harder!”