During three weekends from September to October 2022, the municipality of Alfter opened the Schlosspark for the event Schlosszauber Alfter event, which attracted visitors from the municipality and the region to the Schlosspark with music, a supporting programme and the light-image-sound installation “Im Puls”. RCF sponsored the sound system for the event, and EVT media managed the on-site technical implementation. The Thursday Society 2.0 working group was responsible for designing the programme and, at the same time, celebrated its 75th anniversary. 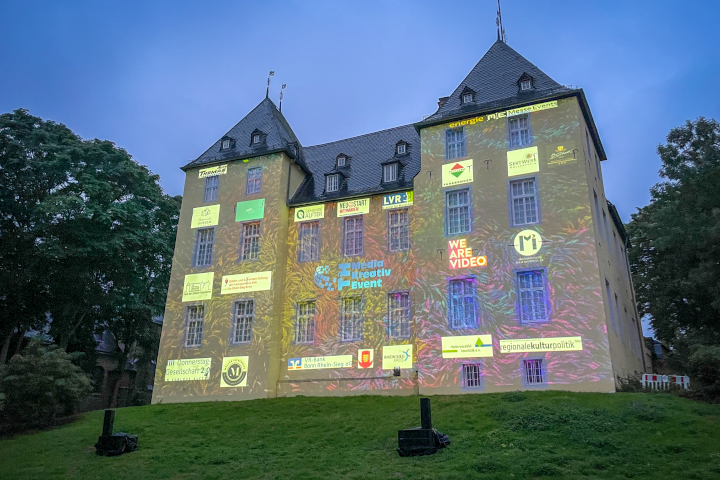 The Schlosszauber in the Schlosspark had a different motto for each of the three weekends, which attracted more than 2,000 visitors, and featured performances by bands from the region, such as Meoneo, and from Cologne and Bonn, including Die Räuber, TroJazz and Parsley. The highlight of each day was the light-image-sound installation “Im Puls”, where video mappings were projected onto the facade of Alfter Castle and supported by music. The installation focuses on the history of Schloss Alfter and the region around Alfter.

Sebastian Hayer, Sales Director Germany at RCF: “dBTechnologies GmbH from Cologne, which is responsible for the distribution of RCF products, is very pleased that we were able to support the event with our technology and provide the perfect sound for both locations, the stage for concerts and theatre as well as the facade of Alfter Castle, with RCF sound systems.”

For the stage sound reinforcement, the responsible event service provider Niklas Butzen of EVT media, relied on a small and powerful system consisting of 2x NXL 24-A MK2 active two-way column systems, each placed on a TTS 36-AS active subwoofer. The stage was sufficiently dimensioned with TTS36 / NXL24 for the area to be played so that the bands could be heard with sufficient power.

The video mapping, which was projected onto the facade of Schloss Alfter, was equipped by EVT media with two pairs each to the right and left in front of the facade and positioned on the lawn. These consisted of an NXL 44-A MK2 and a TTS 56-AS active subwoofer.

Thomas Häußler, Managing Director of TH Media Kreativ Event and initiator of the event, comments on the Schlosszauber Alfter: “The requirements for the sound reinforcement of the mapping show were important elements for us during planning. As it was an audio-visual journey through the history of Alfter and around the Alfter Castle, special effects in the upper and especially in the lower frequency range had to affect the audience. The sound of the RCF sound system was perfect and played its part in the event’s success.”

Niklas Butzen of EVT media on the decision to use these systems “The castle grounds are difficult to reach. Therefore, we needed a good all-rounder that was not too heavy to transport. In EaseFocus, we were able to compare our TTL33 with the NXL44, and the NXL achieved sufficient coverage for this location. So the decision was obvious. The main audience was about 20 metres away from the PA and could therefore perceive the stereo effects ideally, thanks to the wide dispersion of the NXL loudspeakers. But audiences 40 metres away also benefited from the excellent dispersion characteristics.”

More information on the Schlosszauber Alfter can be found here: https://www.donnerstag-gesellschaft.org/veranstaltungen/