Un Violon sur le Sable (A Violin on the Sand) attracts up to 50,000 classical music lovers from all over France and beyond to what is essentially a free festival of three major orchestral concerts plus a solo recital on the beach at Royan on the Atlantic coast. 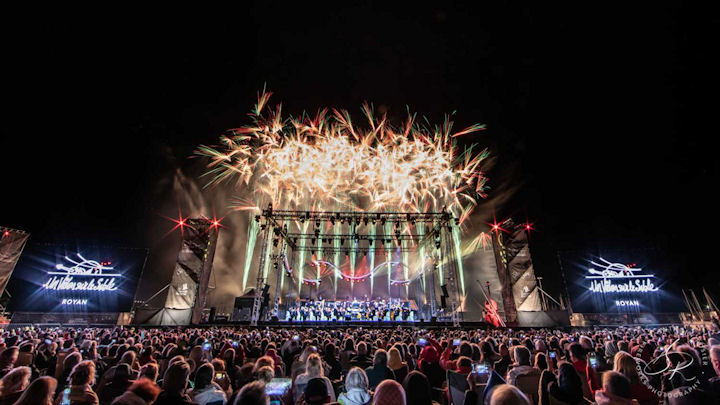 This year’s event took place over four evenings in the final week of July, with NEXO STM as the main FOH system, deployed by local production services company Blackline Event from Fouquebrune.

With additional hangs of speakers up and down the beach to cover an unusually wide lateral crowd, the main line arrays on either side of the stage each comprised of 9 x STM M46 main modules flown side by side with 9 x STM B112 bass extension modules, plus an additional 3 x STM M28 omni modules on the bottom as down fills. Nine x STM S118 subs were ground-stacked beneath each array in a cardioid configuration to tighten the LF response and keep the low frequencies off the stage, and pairs of NEXO GEO M6 cabinets were spaced across the stage as front fills. Three x NEXO NUAR racks per side provided amplification and processing.

“This type of event requires an extremely high-fidelity system to recreate the listening experience of a concert hall in a large outdoor setting for what is a very discerning audience,” reports Bertrand Billon of NEXO’s Engineering Support Team who helped to design the system using NEXO NS-1 configuration software. “What’s more, we needed a lot of power and headroom in the system so the music didn’t get swamped by the sound of the spectacular firework displays that took place at the end of the concerts. The STM system really excelled in both respects.”

Speaking on behalf of Black Line Event, Managing Director Jean Claude Marsaud says: “It’s always a pleasure to use the STM system on this event each year and it’s great to work in collaboration with the Engineering Support Team at NEXO”.

The concerts were mixed by highly respected recording, mixing and mastering engineer Arnaud Houpert who is widely recognised for his expertise in mic’ing orchestras for recording and live performances.

“We’ve used NEXO STM on ‘The Violin’ for a few years now and it’s a pleasure to mix symphonic music on this system. We need coverage that’s more than 100m in depth and STM does this perfectly. It’s also one of the rare systems that maintains the same sound colour at low, or very high SPL. The pyrotechnics mean I have to mix the orchestra at quite high levels in the finales, and the STM allows me to do this without any worries.”