The band has amassed a loyal, enthusiastic, and cross generational following over the years and are known for their genre-blending extended jams and innovative improvisations.

Chris and Gif have been working together on Phish live projects since 2009 and enjoy a great synergy and all the benefits of working as a creative duo.

Gif initially joined Chris as programmer and is now the associate lighting designer and most creative decisions are made jointly. Chris says laughing, “Sometimes we bicker about choices like the proverbial ‘old married couple’,” but this clearly works, and whatever the dynamic, the duo produces spectacular imaginative results for Phish and a hostof other projects on which they also work in tandem.

This latest Phish tour design process started in the summer of 2021 when the band came back for their first performances since February 2020. With no LED screens or IMAG video on the tour, the visual language is defined by lighting and movement as the band want the audience to focus primarily on the music.

The Phish signature automated truss aesthetic that has featured in recent years remained, with 30 sticks of 5ft, 8ft and 10fttruss each flown on two Kinesys Apex motors with TAIT Navigator control. This system is reimagined with new elements including the Tetra2s which produce a completely distinctive look and vibe from anything that has gone before. 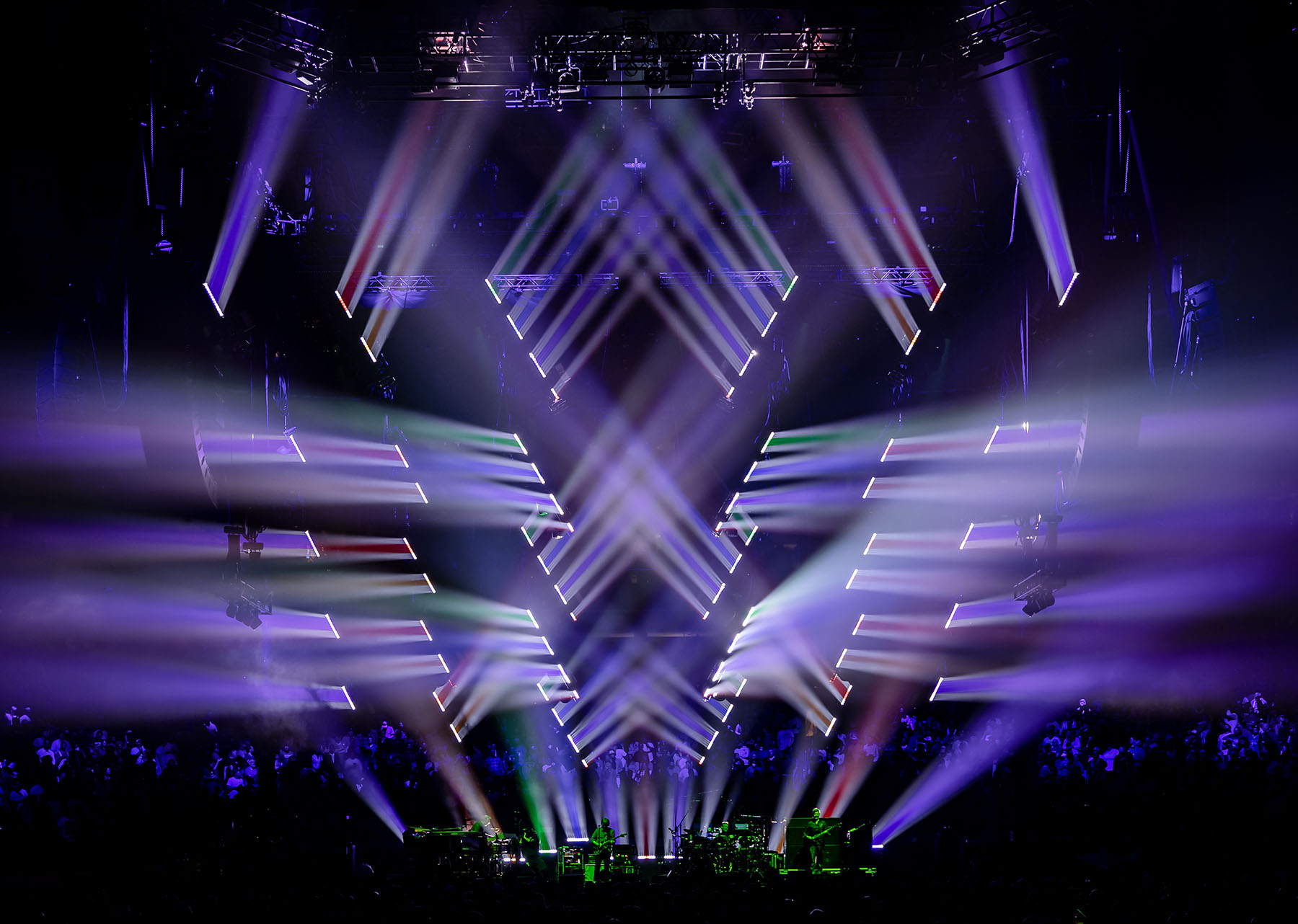 When Chris and Gif started thinking about the 2021-22 design and getting the Tetra2’s onboard, they wanted to go beyond producing impressive static shapes and architectural looks with the trusses, and to tweak the geometry further by shifting and bending these‘lines of delineation’.

“We like to use innovative products and thought the Tetra2 was the perfect fixture for this,” stated Chris, adding that the cues and looks requiredto create this shape-shifting architecture were all developed “very organically” during the pre-programming and production rehearsal periods.

A single Tetra2 fixture was added to the 5ft sections, two to the 8ft sections and three to the 10ft pieces. As well as highlighting the form of the black trusses, the Tetra2s’ great versatility is used for multiple effects – fromsheets and curtains of light to flyaway looks to pixel effects –as well as reflecting the changing trussing patterns which at times flip vertically and fly up to 50ft in the air and down as low as 6ft off the stage.

“The original plan was just to pick out the trussing architecture but when we discovered just how much the Tetra2 can do … it quickly evolved into the ‘feature fixture’ of the show,” notes Gif. He elucidates that they don’t always have the whole Tetra2 bar illuminated. Individual pixel control plus the excellent 4 – 45 degrees zoom and the fact that each pixel has its own lens opens “whole new universes” of possibilities for creating funky, dramatic, and fluid looks and chases.

They also wanted the actual fixture to disappear in someof the geometric arrangements isolating just the active pixels, which is achievable with the Terta2 as opposed to other LED batten products on the market. 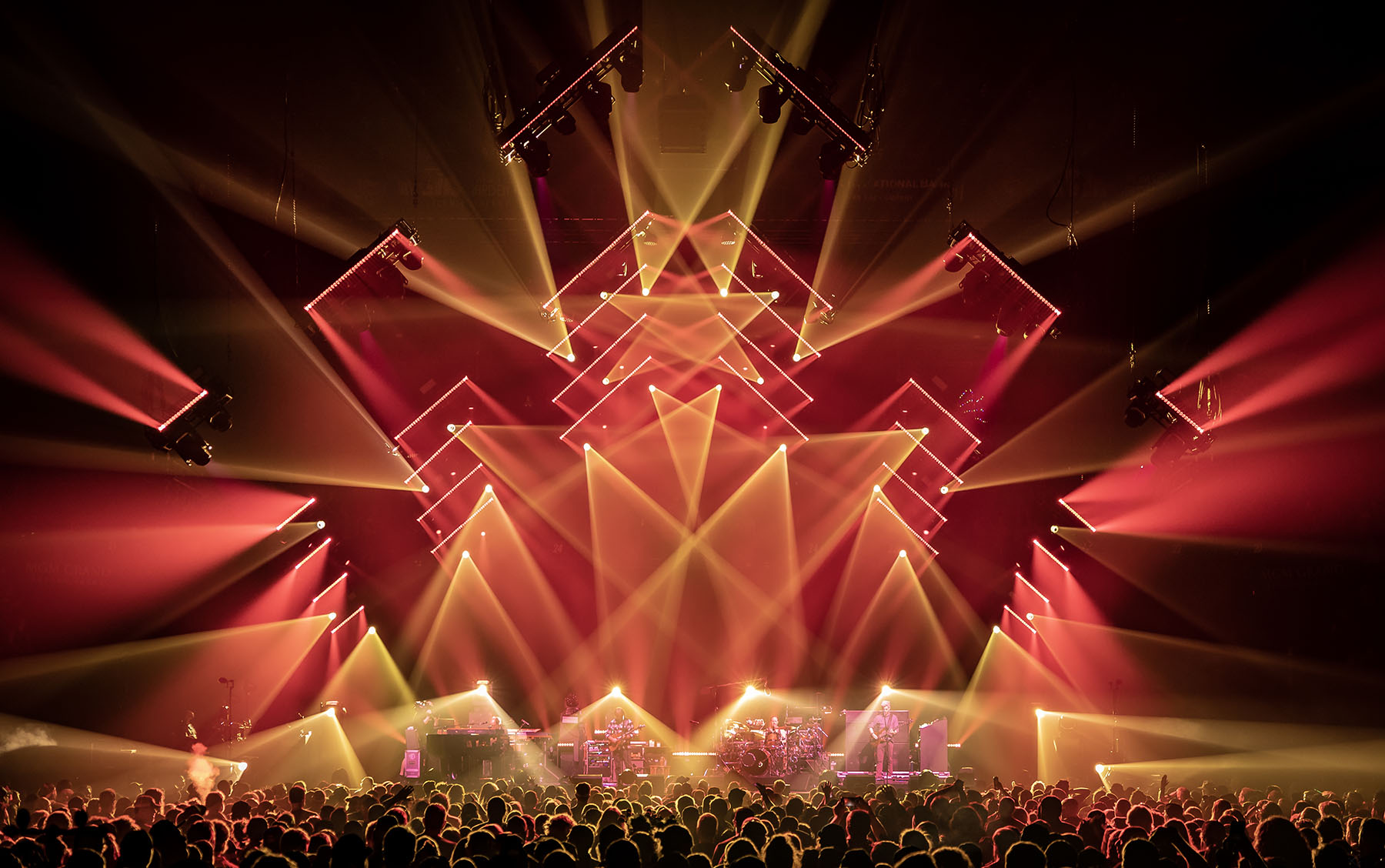 The 60 x Spiiders –44 in the air and 16 on the deck –on the rig for the 2021 summer tour and New Year’s Eve shows were already in the Phish showfile. They wanted these fixtures again for their compact size, intensity, coverage, and fantastic colors, and because they really like the clean appearance and quality of the Spiider light beam.

Chris and Gif both appreciate the seamless color matching between the Robe fixtures which share the same color engine. “Color is a huge thing,” says Chris.

With three hours of music per show (the band never repeats the same setlist), the Phish tour challenge is to “evolve visually” in the same fashion that the band evolves musically over the course of the set notes Chris,who has been lighting Phish since 1989, an impressive long-term relationship.

Not being tied to an album cycle and with the band touring for several months of the year (plus one-offs like their annual New Year’srun and destination events in Mexico), it is fundamentally important to keep the lighting fresh. New programming is also added each day of the ongoing tour says Gif, which is important as many fans will attend multiple shows.

“Especially with Tetra2s on the rig we have the flexibility to change or add new effects in the afternoon and use them that night.” 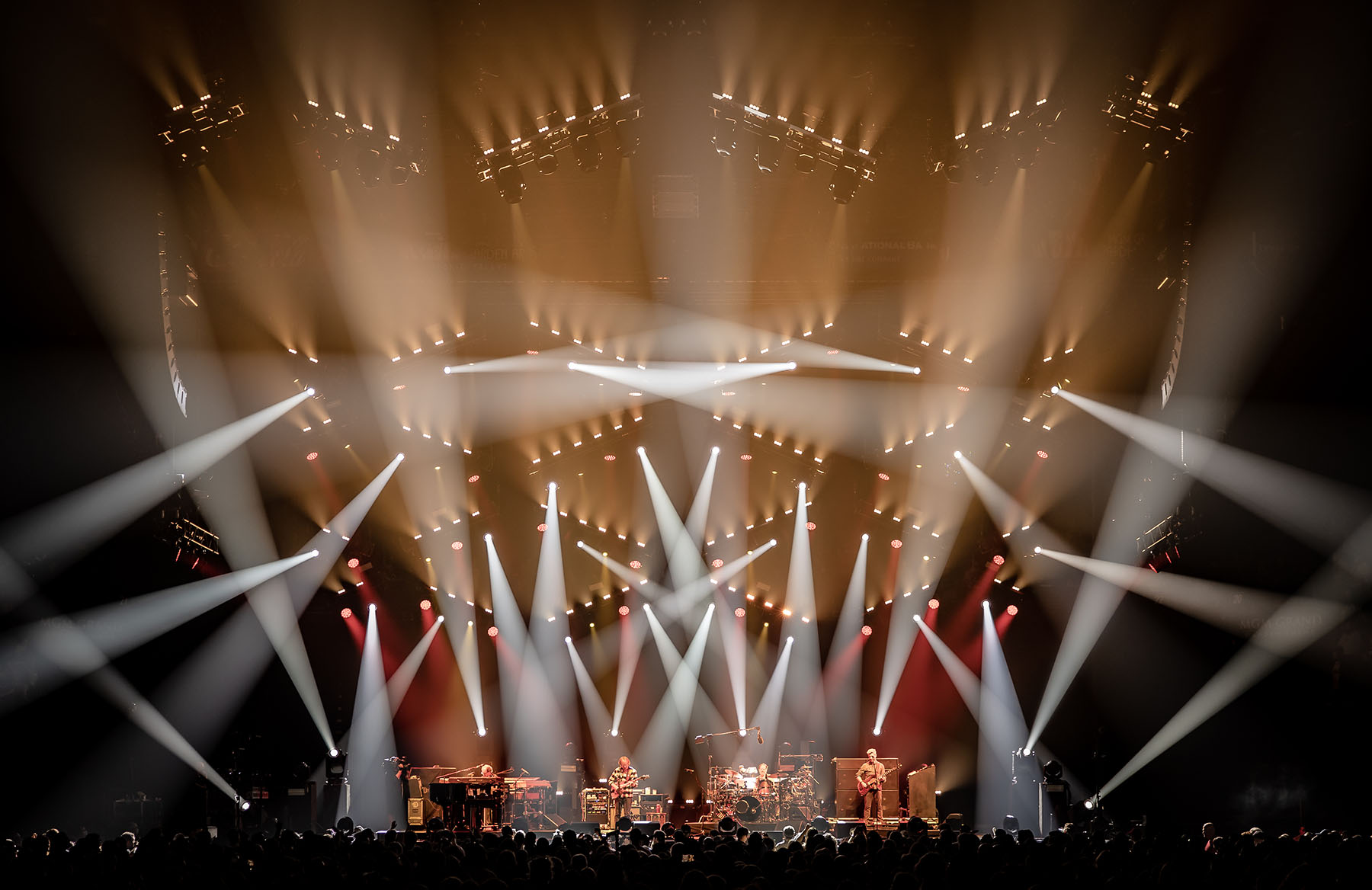 Programming wizardry plus a few smart hacks have seen the creation of some completely unique Tetra2 content. They have discovered interesting ways of layering effects and making the Tetra2s behave extraordinarily whilst working extremely hard to produce fluid and organic looking rather than digital and electronically created effects.

“‘Make it look organic’ has been our mantra ever since we started working with LED products,”says Gif. “The aesthetic goal isfor lighting to look smooth, soft and pretty,” adds Chris.

Both Chris and Gif operate on the tour using networked grandMA3 consoles. Chris primarily deals with the lighting while Gif focuses on the automation, most of which is programmed and triggered via the console so it synchronizes perfectly with the lighting, rolling lighting and motion into one cohesive control entity.

An additional 30 x Tetra2s were supplied by Gateway Studios and Production Services to illuminate and create effects onto a large water curtain at Phish’s New Year’s Eve show, and the current touring package also includes 12 Tetra2s on the deck in addition to all those on the trusses.

The tour lighting vendor is PRG, with the Tetra2s supplied by Gateway who purchased them especially for the tour.