Front-of-house engineer Ronny (Rompa) Bernström (Clawfinger, Candlemass, Hardcore Superstar) who has been working with Swedish rock legends Europe since 2006, has chosen the Waves eMotion LV1 Live Mixer and Waves plugins for the 2022 tour by the band.

Europe is one of the most successful Swedish rock and metal bands of all time, having sold more than 15 million albums worldwide. Bernström explains why he chose the Waves eMotion LV1 for this tour: “I was interested in something new, portable, with a small footprint, that sounds great. After testing numerous small-size consoles, the LV1 offered all the possibilities I was looking for. I was very satisfied to be able to hear all the small details in the sound, which made it super-easy to set the mix.”

He continues, “It was an easy choice for me when comparing sound quality. After trying out numerous brands, the eMotion LV1 is definitely a game changer. It’s not just the overall sound, it’s that it lets you make it what you want it to be. If you like a clean sound, just use Waves’ eMo plugins, or if you prefer an old school vintage sound, you can use Waves’ various analog modeled plugins.”

“You get used to it very quickly, and I love it. During the first day of rehearsals, the band commented on the sound, saying, ‘It’s so clear, and the separation is remarkable.’ Also, as I prefer to work with physical faders, the LV1 together with the FIT Controller for eMotion LV1 is just perfect. Furthermore, we record all the shows, and the network is rock steady.”

“The compact size makes it so easy to use,” he adds. “The fact that I can take it with me wherever I go, and that it is so easy to handle without stagehands or set up for a fast show prep, is priceless. There have been instances where I did not have a stand, and since the LV1’s footprint is so small, I could just place it on any available flight case and it’s good to go. I have done shows in festivals, arenas and clubs, and it’s great that I can transport the LV1 by myself and set it up in no time, and after a show, I pack it down in a minute.”

Bernström’s setup for the Europe tour includes an “A kit” and a “B kit.” The A kit goes in the trailer, and the B kit is for shows traveled to by air. “In the A kit we have a dolly for all Wireless IEMs and mics and stage boxes,” says Bernström. “All four LV1 mixers are packed in Peli Air 1637s. The configuration of the four LV1’s is all the same. We use a FIT Controller for eMotion LV1, a Waves Axis One, a SoundGrid Extreme Server-C, DSPRO StageGrid 1000, Netgear ProSafe M4100-D12G Ethernet Switch and HANNspree HT 225 HPA Touch Monitors, all packed in a custom-made aluminum lightweight case. Stage boxes are DSPRO StageGrid 4000 shared between FOH and monitor, connected by FIBERBOX connectors and an Optocore fiber cable, which are a must in big arenas. Setup is really easy, and you can see the channels or all the inputs and outputs on one screen.” 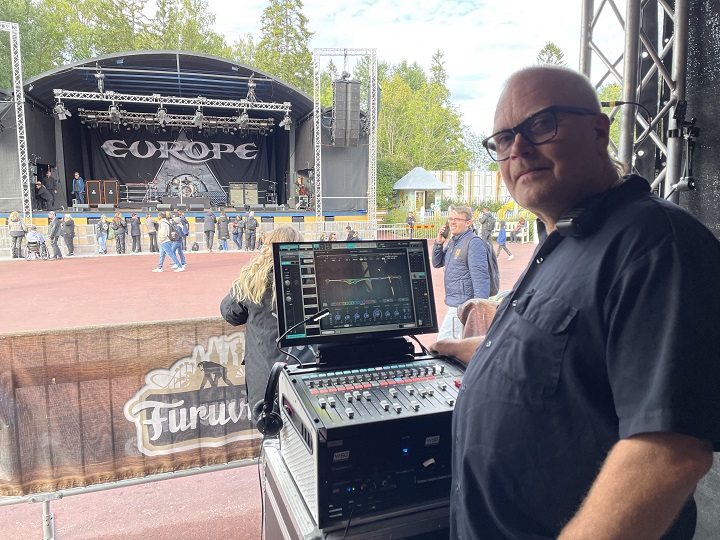 Waves plugins, fully integrated within the eMotion LV1 interface, are a crucial component of Bernström’s workflow. “The SSL E and G channel plugins,” he comments, “are my starting point. They are a very fast way to start, and they encompass everything I need in one plugin. I use them on almost all my inputs, except for vocals and some guitars. On vocals, my favorite is the F6 Floating-Band Dynamic EQ. It is fast and easy to use. I also use the F6 on inputs when I need some extra control or have some EQ issues. My go-to for guitars is the Scheps 73. It makes the guitars pop out just by adding some harmonics. Normally I use the HP filter, maybe adding some mid and taking out some HF, depending on what kind of guitar sound I’m looking for, and I normally check the preamp gain to add some harmonics. On drums, I really like the Manny Marroquin Reverb. It’s a great sounding reverb and I especially like its distortion, which is perfect for getting that 80’s drum sound. I just add some distortion and I am there. Another must-have plugin is the Primary Source Expander (PSE). Due to the guitars, the Europe stage is extremely loud and using the PSE on backing vocals is a savior.”

“Using the eMotion LV1 has changed my way of mixing.” Bernström remarks. “Now I am in total control of sculpting the sound exactly the way I want it.”