The German band Die Ärzte (aka the ‘Best Band in the World’) is one of many artists who made creative use of the forced pandemic break. After the album Hell, released in October 2020, the cult Berlin band released an album with the contrasting title Dunkel just under a year later. 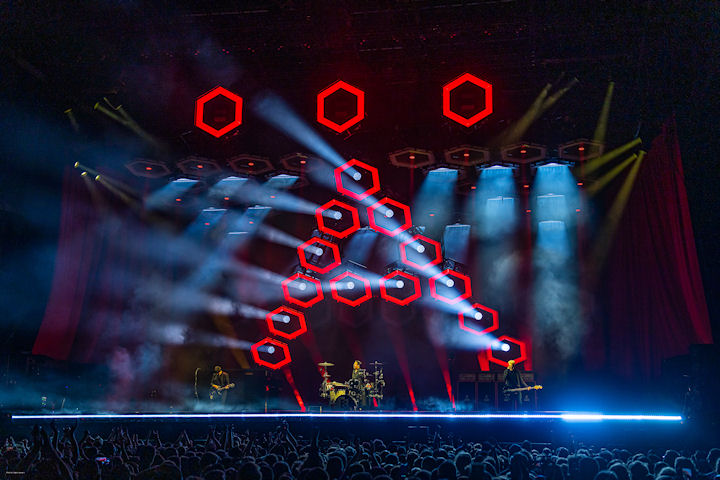 The associated tour, Buffalo Bill in Rome, is currently running, for which production designer Bertil Mark uses 21 of the new GLP impression X5 wash lights, 69 X4 Bar 20, 33 JDC Line 500 and 17 JDC1 to create his modern interpretation based on a huge honeycomb-structured retro design.

Bertil Mark has been working for Die Ärzte since 2019, having previously overseen Farin Urlaub’s solo project Farin Urlaub Racing Team for a number of years. He developed the design for the current band tour from scratch and, as he admits, was a little surprised that the highly demanding, large-scale design ever became a reality. “I’m all the more grateful that we actually put it on the road,” he says.

The honeycomb construction in the stage roof, which can be moved on a C1 system, was created in cooperation with schoko pro GmbH from Wiesbaden. “The honeycomb and everything hidden within it is a completely unique construction,” confirms Bertil. The lighting in the honeycomb alone accounts for 125 DMX universes.

And those effects that are concealed inside come almost exclusively from GLP. “I maintain good contact with GLP, especially with Oliver Schwendke, and whenever a specific product is involved, I also work very intensively with Michael Feldmann,” the designer states. 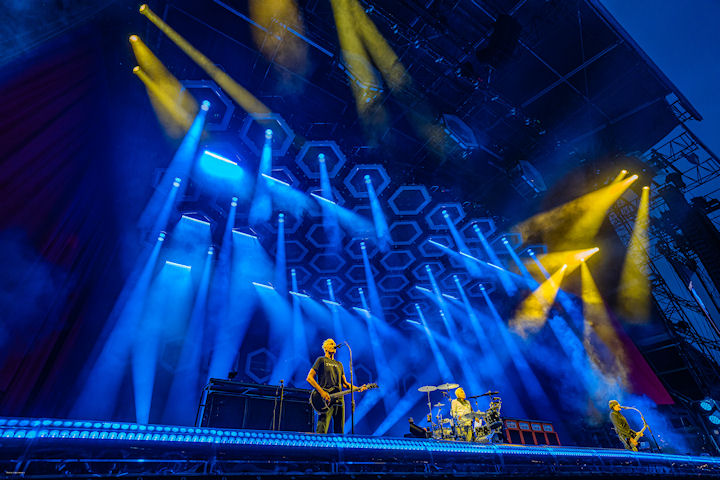 For example, the latest-generation impression X5 wash lights are undertaking one of their first assignments on this tour. On the one hand, 13 fixtures are installed in the honeycombs, but on the other hand they are also used as street lighting. “When the honeycombs form the Ärzte ‘Ä’, it’s just the X5s that make it glow,” adds Bertil. “What sets the X5 apart is its huge output and really big zoom range. In this production I only use the devices as a wash, without pixel mapping; a lamp with a high, very controllable intensity.”

The lighting system also includes 69 GLP X4 Bars. Some Bars are also used in the honeycomb-shaped sockets for IMAG screens on the left and right of the stage, where they ensure even lighting in the background. The remaining Bars are arranged in rows on the roof, each of which is interrupted by a row of spotlights. “The side wings are also lined with X4 Bars,” he continues.“The Bars are the only spotlights that you can really see. Everything else is hidden in the honeycombs, away from the visitor’s eye.”
The decision to almost entirely hide the lighting set was made very consciously, explains the designer: “By accommodating most of the spotlights in the honeycombs, the stage itself looks very minimalist and tidy. But there are always changes and surprises due to the way the honeycombs are moved and as a result of their assembly.”

In general, the show is characterised by spontaneity and the element of surprise: “There is no fixed format. The spontaneity on stage is almost a trademark of the band, and a technical failure can also become part of the show. Being able to act spontaneously and creatively as an operator is, so to speak, my speciality. I have little interest in timecode perfection, and I play the lighting more like an instrument. That’s why I enjoy working with the band so much.” 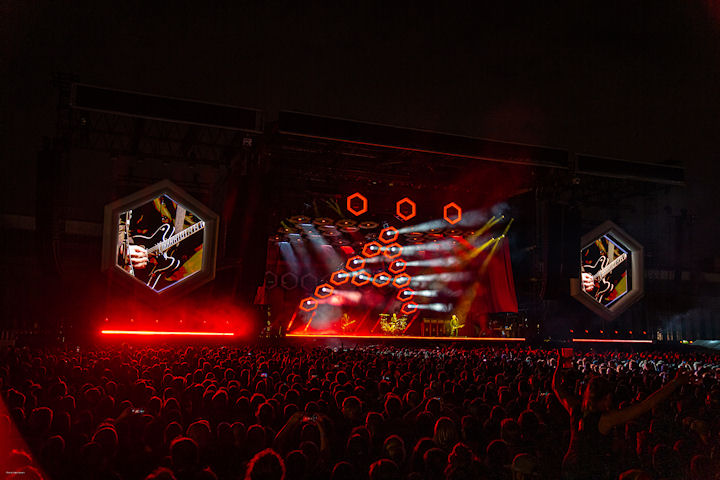 The striking design was borrowed from the quiz show, Dalli Dalli with Hans Rosenthal, which was so popular in the 70s. “That’s why internally we just call it the DalliDalli design,” smiles Bertil.

The 33 JDC Lines in the set play a special role, as he explains: “They are basically part of the backline and frame the mighty guitar and bass system with their tremendous light intensity. Its brutal brightness visualises the enormous volume that comes out of it.”

The linear hybrid devices with the powerful strobe line are mounted on top and bottom of the guitar and bass dollies, with some of them also providing the street lighting: “The JDC Lines are very suitable for building architectural lines or borders. If you use them as backlighting, I’m always amazed at the power that comes out.”

The JDC1 hybrid strobes, on the other hand, are only used as wash lights – eg to illuminate Bela B.’s drum riser. In addition, they provide another powerful light element in front of the backline, where they serve as accent and decorative lighting.

“The JDC1 is a great creative toy that I really appreciate,” Bertil continues. “But I hold back with die Ärzten and use the fixtures very sparingly. If I need a strobe, I use the strobe line, otherwise I use the RGB elements as a wash.” Bertil Mark is also the show operator, while Thomas Krautscheidt is at his side as video director and André Nordhoff accompanies the production as stage manager. The production manager is Ricarda-Selina Reichert. As head rigger, Christian Böttger is responsible for the management of the C1 system and the very high roof loads. Satis&fy is providing the technology for the tour, which is organised by KKT (Kikis Kleiner Tourneeservice).