With a capacity of 30,210, the BayArena is the definition of a modern sports venue. Home of Bayer 04 Leverkusen, one of Germany’s leading professional football clubs, the stadium is noteworthy for spectator proximity to the on-field action. First opened in 1958, it has undergone successive redevelopments, and was most recently remodelled during 2008 and 2009, when it was expanded to its current capacity and added its unique nest-like roof structure. Over the years the club has always looked towards innovative and sustainable solutions when it comes to stadium technology, and one of its most recent advances was to replace it’s existing audio provision with the installation of a CODA Audio sound system. 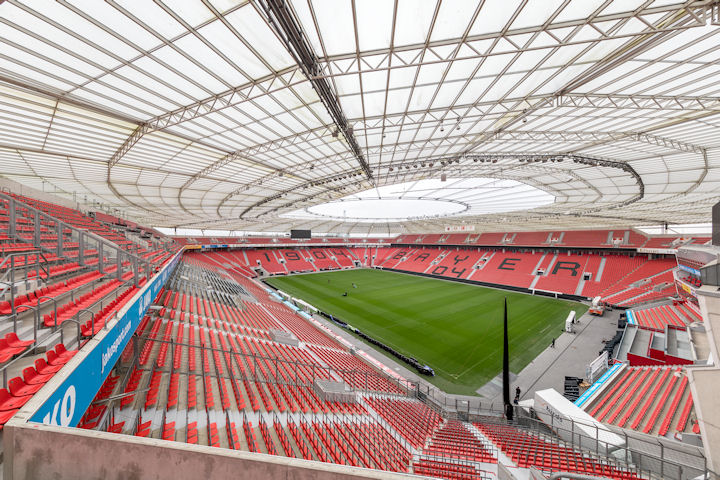 The project was the responsibility of TecArena Plus, a wholly-owned subsidiary of Bayer 04 Leverkusen Fussball GmbH. TecArena is the club’s technical service provider and is responsible for facility management, construction and project management, as well as Green-keeping. Its Managing Director Felix Duden, describes the brief: “Our objective when renewing the sound reinforcement system was to significantly improve the electro-acoustic sound situation in the stadium with a high-quality, attractively priced solution.”

A nationwide tender process followed, with representatives of several suppliers invited to the stadium to gain an impression of the prevailing conditions. Media technician Christian Wild of TecArena comments: “We provided the companies with an existing EASE model of the BayArena to ensure that the targeted STI (Speech Transmission Index) values were reached. For the new system, our clearly communicated goal was to achieve an STI value of 0.56 on at least 90% of the areas to be covered.”

Experienced and established tech group Wilhelm & Willhalm of Aschheim, a distributor partner of CODA Audio, emerged as the winner, having worked closely with the loudspeaker manufacturer’s tech support team on a suitable concept. TecArena’s Wolfgang Seßmann, Head of Strategic Facility Management was unequivocal: “The simulation results, all performance parameters as well as the sustainability and cost-effectiveness of the offer clearly spoke in favour of CODA.”

As well as supplying the system, Wilhelm & Willhalm was appointed as the integrator for the project, which had to be completed during the summer break at the same time as other extensive works on the playing surface.

The new system at the BayArena comprises 82 x CODA Audio APS (Arrayable Point Source) loudspeakers. A lightweight (27kg), hybrid loudspeaker, APS can be used either as a single point source, as well as in horizontal or vertical arrays. As a ‘best of both worlds’ solution which can combine the scalability of a line array with the flexibility of a point source, APS was the perfect fit for CODA’s Bundesliga debut. 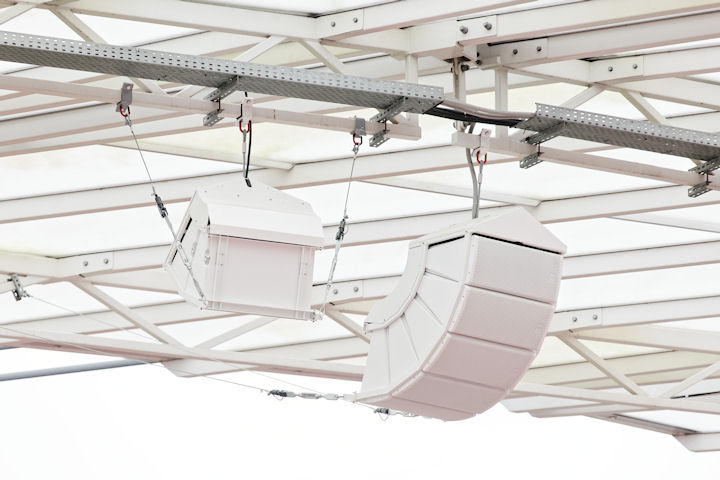 To cover the tiers inside the stadium marine-grade APS are deployed across 16 positions, 14 of which comprise 5 APS each. Due to structural restrictions a further two positions for the south stand comprise 2 units each. APS versions with a horizontal dispersion angle of 60°/90°/120° are used in different combinations to match the respective tier topology, allowing different sound zones to be customised. Media representatives, for example, can work relatively undisturbed at pre-designated interview positions, while fans continue to listen to music or stadium announcements. A feature of the design (and new for the stadium) is a system to cover the pitch itself. Here, 4 groups of 2 APS units point downwards from the roof to cover the entire surface.

“Compared with the previously installed system, the CODA arrays are visually much less noticeable,” notes a satisfied Christian Wild. “Instead of eight units, only five speakers are now required in most positions, and the weight of the arrays is also much less than before.”
His media tech colleague, Philip Poerschke adds:“To be honest, we were a little sceptical at first when we saw the comparatively small number of loudspeakers that Wilhelm & Willhalm wanted to install in the BayArena. We were, however, quickly proved wrong, and CODA Audio’s dual-diaphragm technology quickly convinced us.”

The system is driven by 12 x CODA Audio LINUS14D amplifiers, each delivering 4 x 3500 watts at 4 ohms. Four audio inputs can be addressed in the amplifiers – analogue, AES3, LiNET or Dante can be flexibly routed to any of the four outputs. At the BayArena the amplifiers are spread across four control rooms located in the upper tier. Crossover cabling (‘tooth gaps’) between the four control rooms, as well as between each control room’s three amplifiers, ensures that the supply to the sound reinforcement zones is guaranteed in the event of a theoretically possible amp failure. 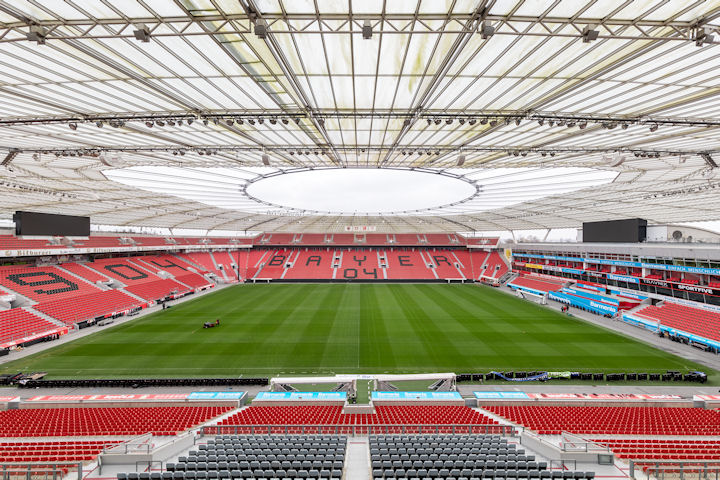 With large cable cross-sections counteracting losses on lines with lengths of 80 to 120 metres, the amplifiers running in continuous operation require considerably less energy than the models previously in use – the 12 CODA units in place have replaced a previous total of 72. The LINUS14’s signal routing can be set via remote control software (LINUS CORE) available for macOS and Windows, or directly on the unit via front panel buttons, jog dial and monochrome display.

An independently operated voice alarm system is available in the BayArena for use in hazardous situations – a connection between the voice alarm and pro audio systems was set up via an interface in the LINUS amplifiers in accordance with DIN 60849.

Wolfgang Seßmann reflects on what he considers to be a project at was as innovative as it was efficient: “The required acoustic parameters were clearly exceeded during the project acceptance, and after the first Bundesliga matches, our new sound system has more than convinced us.”

Excellent speech intelligibility and music reproduction are fundamental to the match-day experience, and where in the past there had been complaints from fans that stadium announcements could be difficult to understand, the new system has alleviated those problems, according to Philip Poerschke: “There have been no more complaints like that, in fact we’ve received feedback from our fans that everything can now be clearly understood and that the music sounds really good.”

Christophe Zur Loye, Head of Sales at Wilhelm and Willhalm, concludes: “Bayer 04 Leverkusen plays a leading role in the Bundesliga and as a trendsetter, is innovative in many respects. This is undoubtedly one of the reasons why CODA Audio was selected for the BayArena’s sound system. The technological concept convinced in an ambitious pitch and I’m convinced that price was not the decisive criterion – those responsible were not interested in a budget solution! Rather, thanks to a convincing overall concept, we were able to prevail with CODA Audio in a very committed competition.”