When Austrian hip-hop artist and producer RAF Camora released his album Zenith in 2019, he announced it would be his last. But then the album Zukunft was released two years later, just a few months before the artist went one better with Zukunft II. This was more than reason enough to follow up with a tour through Germany, Austria and Switzerland. Lighting designer Felix Seidel accompanied the artist for the first time and created the concept for his Gotham City tour. His ideas were clear: that specific objects from a music video should be used, which at the same time would dictate the style.

“The idea was to bring the look from the ‘Guapa’ music video to the stage using the set, video content and lighting to create the ‘Batcave’ atmosphere,”explains Seidel. “But since this wasn’t to be the only mood, a lighting design was needed that would not only work in this context, but also had different facets.”

For this, the young designer, who also works with Asaf Avidan and Fil Bo Riva, used 32 impression FR10 Bars and 20 GLP JDC1.

During the show, the journey continued from the Batcave through the gloomy Gotham City and into a darknight sky, where blimps circled bearing the neon signage “Future”.

“A revolving stage gave us the opportunity to alter the stage design quickly. There were some modifications made as well as a B-stage – as a result of which there was always something new to see and it was possible to create a good arc of suspense,” says Seidel.

Instead of a classic spot/wash design, Siedel pursued the idea of “expanding the look more and pulling it forward”. He was able to do this with the help of four truss fingers that reached into the audience area. 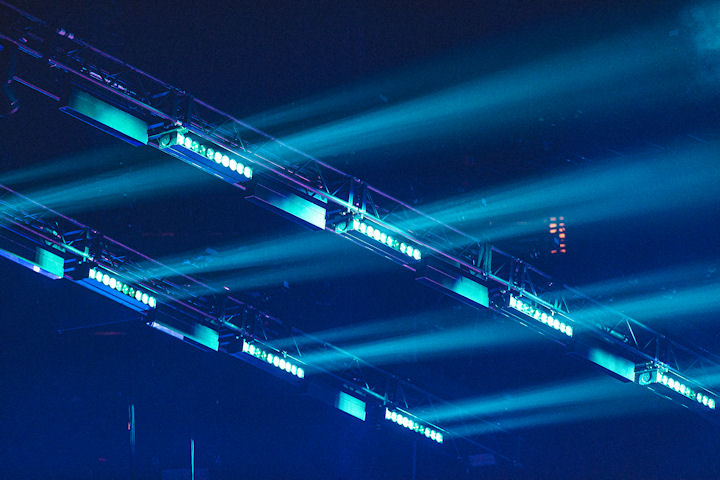 All FR10 Bars were housed in these truss fingers, framed by two JDC1 hybrid strobes at the beginning and end of the truss. While Seidel used the JDC1 placed at the back as a rear light, the front ones were used as blinders. The designer had intended to use the impression FR10 Bars more as a stylistic device than as an effect light. “First and foremost, I wanted to use them to create spaces on stage, and they were perfect for that,” he says.

“Great effects can be created with the Bars when I only use individual pixels – from fast movements to slowly changing colours and dimming effects,” the designer continues.“If I align them upwards, I can stretch a sky of light over the stage in no time at all.”

“With the FR10 Bars, the looks I had in mind could be implemented very quickly and effectively. I wanted something hybrid that could carry the dynamics of a live show well.Basically everything from beam to flood is possible in this fixture. It was also interesting to play with the individually zoomable pixels; this resulted in some extremely impressive effects.”

The GLP JDC1 hybrid strobe has long been one of Seidel’s utility fixtures, he adds: “The JDC1 is of course very versatile with its multitude of different possibilities. There is so much you can do with it, which is why I always like to specify the devices I use. With RAF Camora I used them as movable floodlights. Their output suited the show very well, since we also played larger venues such as the Lanxess Arena in Cologne and the Hallenstadion in Zurich. Of course, lighting with a high output and great, strong colours are particularly good.” 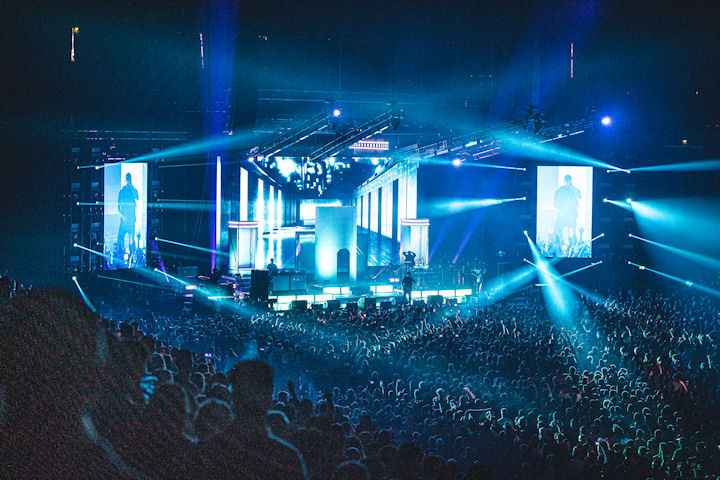 GLP products have regularly featured in Felix’s designs. “Overall, I’ve had very good experiences with GLP fixtures; impression X4 Bar and JDC1 are essential design tools for me,” he concludes.“With all the products that I have been able to use so far, the colours and light output have struck me as being most positive. The uncomplicated handling, the clean dimming behaviour and of course the speed of the motors are all outstanding. Also, with GLP’s Andreas Brandt I’m able to maintain a regular flow of information with any general product questions.”

The technical service provider for the tour was Feedback Show Systems & Service, IBB organised the tour and Michael Jahns was production manager. The merging of lighting and video content would have been difficult without the creative input of Tiziano Mirabella, who designed the video effects in a live context. “It was a great collaboration that allowed us to complement the video content in the lighting and thus create a large-looking and harmonious overall canvas,” adds Seidel.