Italian superstar and showmaster Vasco Rossi roared back to live performance action this year with his “Vasco Live 2022” stadium tour which played 11 venues around Italy all of which were completely sold out.

The production was run to strict Covid guidelines with a goal of keeping the environment safe and ensuring that the show could go on, as the latest variants of the virus demonstrated that they are still capable of causing havoc, the consequences of which no large tour wants to deal with!

Lighting designer Giovanni Pinna created another spectacular show, choosing nearly 300 Robe moving lights to be the heart, soul, and backbone of the rig, with MegaPointes, Spiiders and LEDBeam 150s.

A 71-metre-wide stage and over 1000 square meters of video in Gio Forma studio’s set concept offered up a fresh new variation of the epic high-impact widescreen aesthetic that Vasco loves for presenting his live work. Giovanni took this as a major starting point for the lighting creative!

“I knew immediately – and obviously – that I needed A LOT of super-bright lightsources to cut through and still make an impact with the video whilst also complimenting it and not taking over!” he declared, for which Robe proved a good and reliable choice that fitted the budget.

Giovanni also wanted to limit the amount of fixture types when it came to choosing lights, so these three Robe fixture types were combined with two other genres of luminaires.

He based the structural element of the lighting rig on a series of curves and circles, with four main circle trusses flown under the roof, all on a Kinesys automation system. The largest was a central 14 metre diameter with a 6-metre diameter one inside it and two 4 metre diameter side circles. 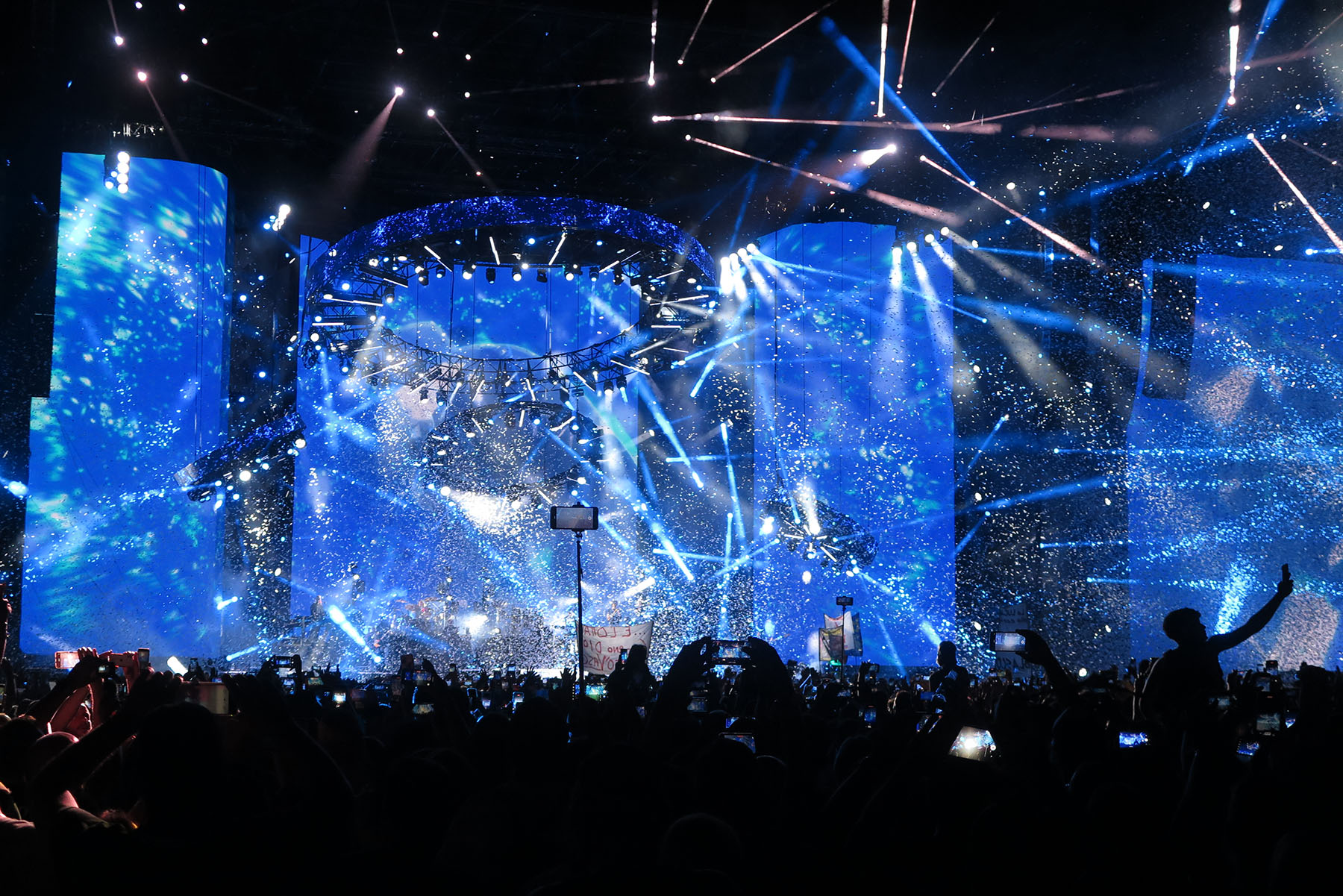 All of these were custom made to fit this design and moved up and down and tilted and pitched, a great effect that helped Giovanni keep the visual surprises coming right through the 2-hour and half set.
There were numerous side stage trusses and more between the PA and screenwings. Giovanni added eight 2 metre diameter Roll Star motion circles hung in the roof and side wings downstage facing into the audience.They rotated a bit like a giant Gobo and were “a lot of fun” to integrate into the show, also augmenting the architectural elegance and style of curves.

Giovanni has been a keen Robe user for several years and knew that MegaPointes and Spiiders would deliver exactly his required effects … the challenge was getting enough of them for the duration of the tour!

The logistics were left to lighting vendor BOTW, who “came through with everything I wanted and were fantastic as always,” he noted.

The 186 MegaPointes, 164 x Spiiders and 24 x LEDBeam 150s were positioned all over the rig- on the circles, in the overhead trusses, across side and wing trusses, and on the stage deck.Basically, anywhere a fixture could be rigged! Eighteen Robe Pointes were deployed in the 4-metre circle.

Many were on the floor and around the scenery which provided a topological environment for Vasco and the band. Other lights were positioned along the downstage edge of the stage where there was a special balcony that included four triangular frames– two onstage and two in the wings –for lighting positions,together accommodating 48x MegaPointes and 36 x Spiiders for low level lighting which was highly effective.

The set and scenic elements were specially fabricated by BOTW.

“Using MegaPointes to produce all the fantastic massive looks and effects was incredible,” Giovanni enthused, explaining that for once, they had a decent amount of time to tech and programme the show during production rehearsals ahead of the first gig in Trento.

In addition to being able to create all the dynamics and spectacular moments he wanted, Giovanni knew he would have a reliable rig in the heat and dust of a particularly hot Italian summer. “The Robes were rock solid – we only had to change out one fixture on the whole tour,” he reported. 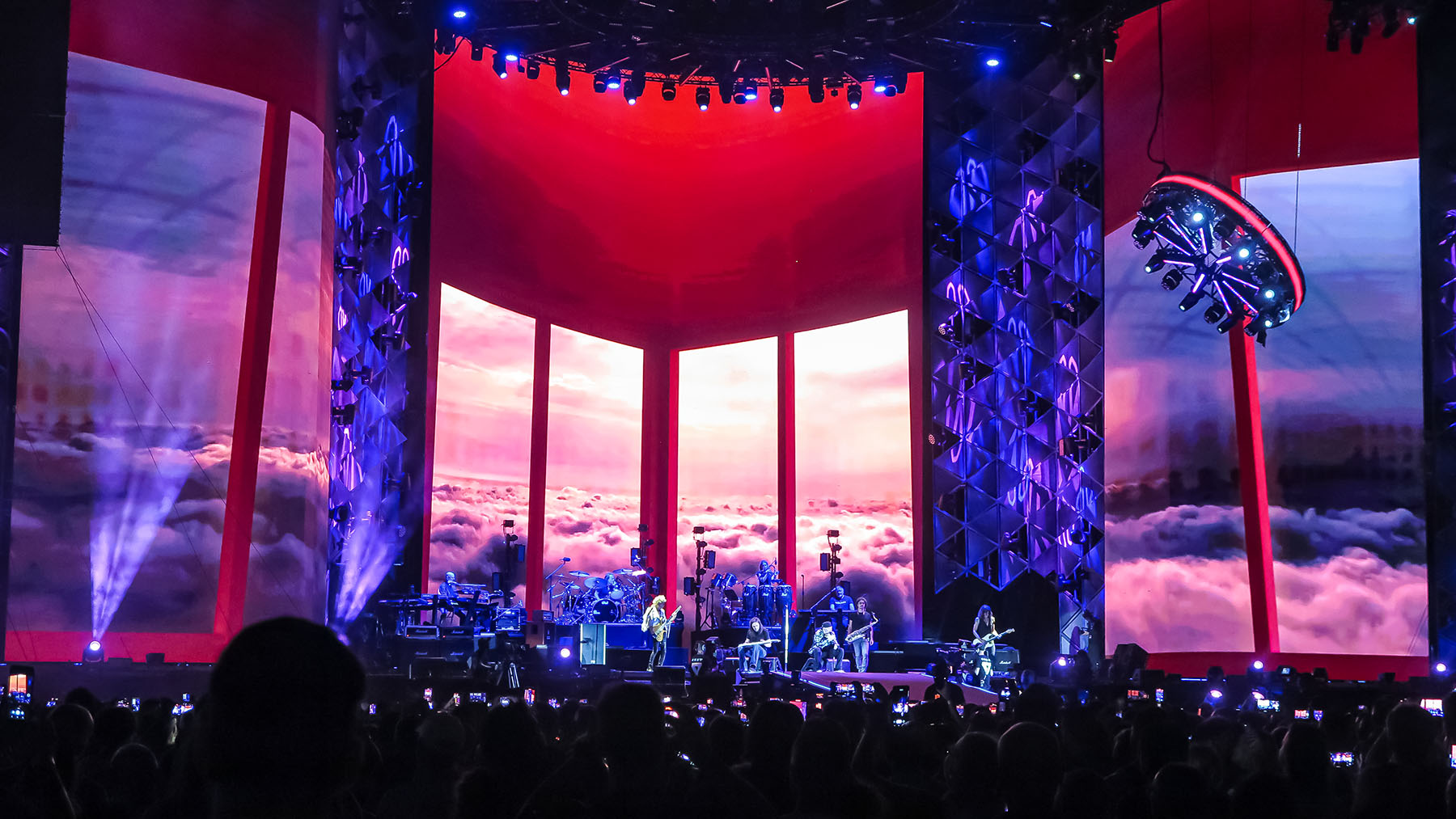 Thirty-six of the fixtures, mostly MegaPointes with some Spiiders, were controlled via a zactrack system for specific numbers, with the positional information and triggers integrated into the lighting cues on his grandMA3.

With video and lighting inextricably entwined, Giovanni and playback videooperator Marco Piva worked closely to craft those huge looks and awesomeness– the two have worked together with the artist for several years and enjoy a great synergy together with live camera director, Giuseppe “Peppe” Romano.

On this tour, they had a dedicated Notch operator and d3 specialist Nicolas Di Fonzo was also integrally involved in producing the big visual picture.

The 31-truck tour was production managed by Danny Truhlar. The timescale for each show was a 2-day set up followed by a show day, and ER once again supplied a spectacular laser system used for six songs, adding richness and texture to the visual mix. Videokit was supplied by Event Management.

For Giovanni and all of the crew, it was fantastic to be back on the road after an enforced break of two years due to the pandemic. “It was just amazing to be back together again following our passions, enjoying the camaraderie, producing great shows and entertaining so many people!” he concluded. 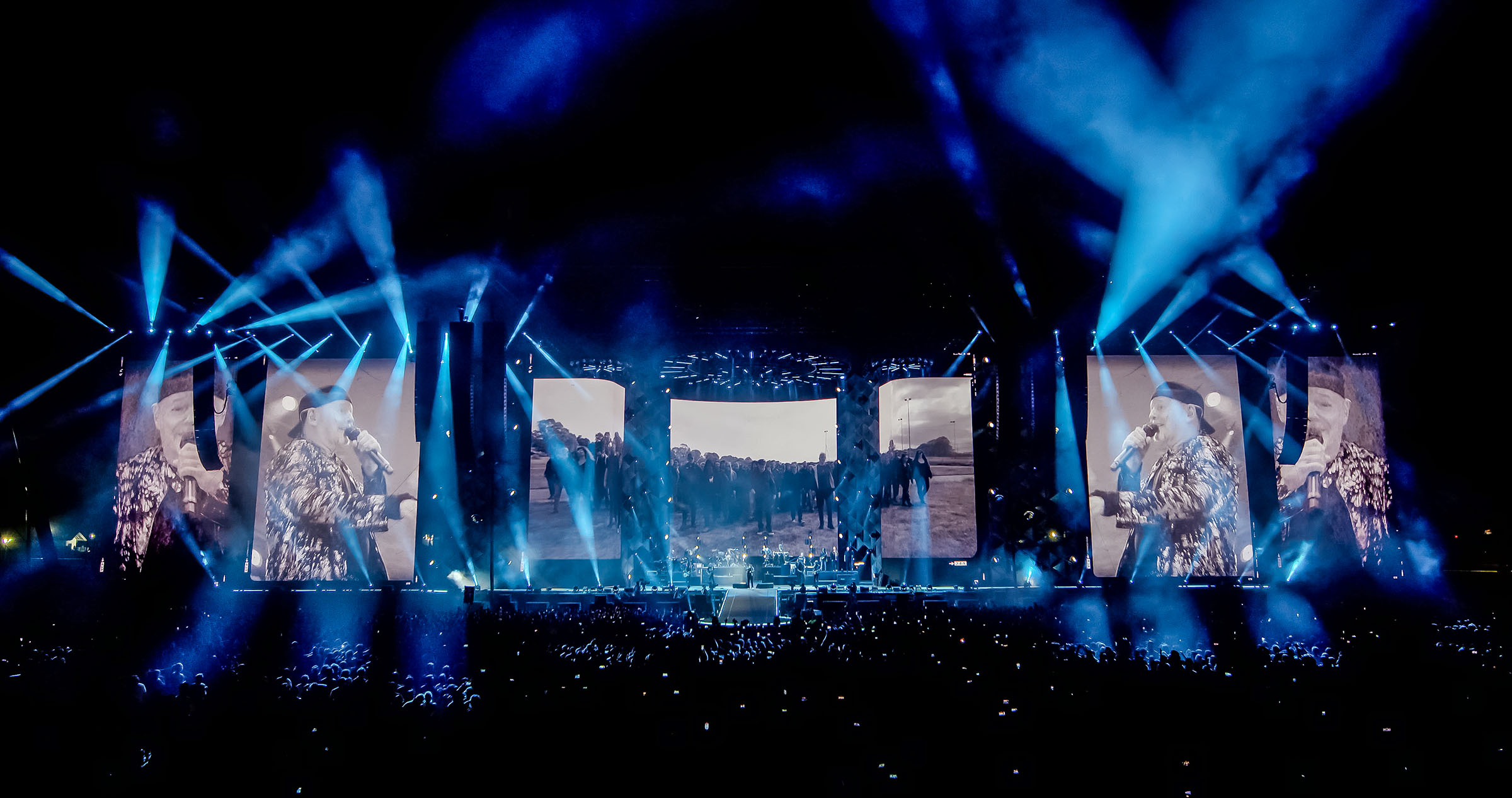