The legendary Glastonbury Festival (Glasto) – one of the largest and most popular celebrations of contemporary music, art, and culture – returned with its glorious 50th anniversary edition offering a diverse and spectacular array of WOW factors and creative craziness across multiple stages in the green and undulating fields of Pilton Farm Somerset in the UK. 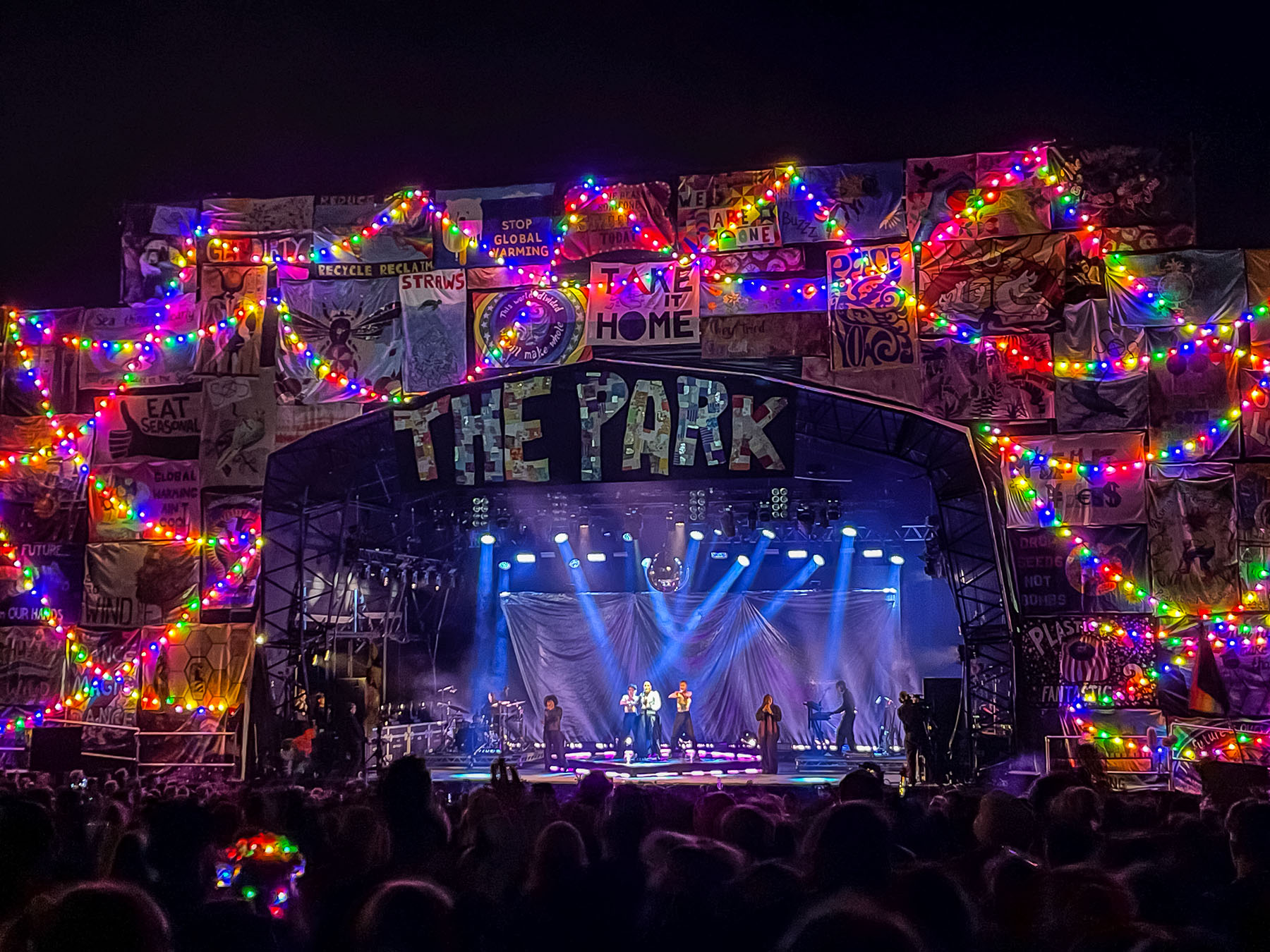 This followed two “enforced fallow years” due to the pandemic.

Robe moving lights were used site wide on many stages and areas, including Arcadia – back with their iconic Spider – at The Park Stage, home of an eclectic and electric fusion of genres and independent entertainment, and on the BBC Introducing Stage, a hotbed of rising star talent and a prominent showcase for future sounds and styles.

Arcadia was founded by Pip Rush (creative director) and Bert Cole (technical director) in 2007 on a quest to produce and curate unique, mind-popping, imaginative and truly ‘out-of-the-box’ visual and sonic experiences for audiences to enjoy DJs, musicians, and live performance art.

Their flame-throwing, laser-shooting spider is one of the most ambitious and enduringly popular of those environments, gloriously returning to Glasto for the first time since 2017!

The massive arachnid made from recycled military and industrial machinery parts once again energised and united music lovers under its magical metal belly for a superlative line up of artists and fun over the festival period.

Pip Rush enthused, “The spider has so much history that we felt it was right and very appropriate to bring it back for the 50th Glasto, and especially so after the years of isolation we have all been through. 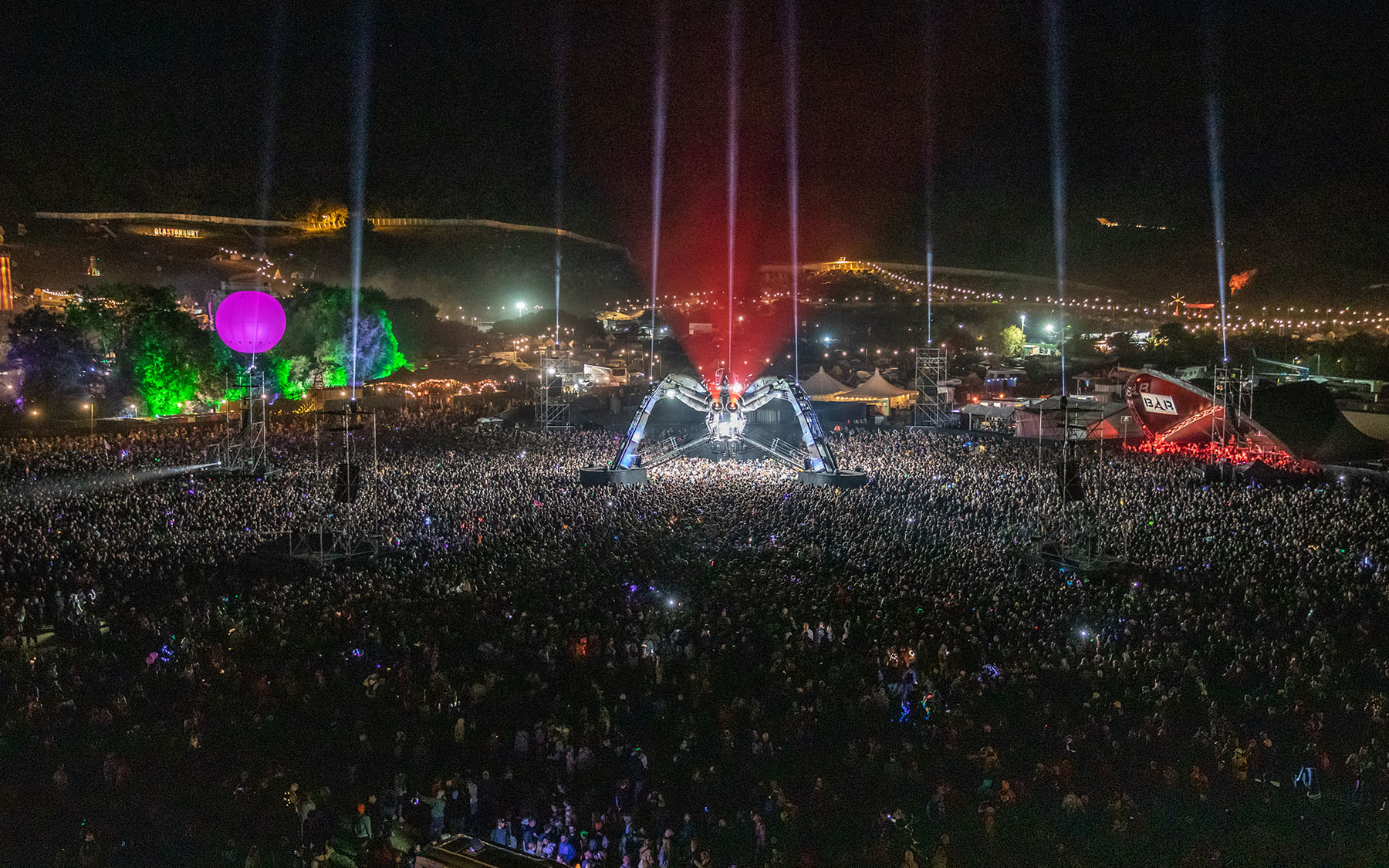 “It was amazing to get the Glastonbury community back together, the atmosphere was electric from the moment the gates opened and we had so much support from the audience and artists alike, everyone was up for making it special and it really was!”

Lighting was designed by Dave Cohen from MIRRAD, and co-ordinated by Arcadia’s head of lighting, Katie Davies, who specified and facilitated all the lighting on the rig including all the Robe fixtures which were hired from Cambridge-based rental company, CEG.

The objective this year was to mix it up and do something different, swapping out some of the older elements to keep the light show fresh and contemporary, which resulted in the addition of 18 x Robe Pointes, 9 x Robe Spiider LED wash beams and 12 of Robe’s new iPointe 65s.

Robe has consistently featured on Arcadia shows over the years and iPointes were a key luminaire this year, picked for their robustness, versatility, and the fact they could stay exposed without needing any weather protection.

Six iPointes were distributed on the six PA towers surrounding the Spider, with another three attached to the Spider itself. The lights on the Spider mimicked became dramatic sky-scanning beacons of light, beckoning revellers from across the site to join the Arcadia vibes.

The Robe Spiiders in waterproof domes were rigged on three podiums built and installed to up-light the MCs each night, with six Pointes on each of the Spider’s three legs for dancefloor lighting.

When Arcadia started touring the Spider after 2017, Pip specifically wanted its form and architecture illuminated and highlighted as a standalone feature.

There are also around 80 custom Anolis – A Robe business – fixtures inbuilt into the Spider’s metalwork located in the legs, face, eyes, eyebrows, body, inside the DJ booth, and in the belly, all run by remotely located Anolis ArcPower drivers. This allowed 48V low voltage cables to be run throughout the Spider structure, eliminating the need for additional mains cables – for a safer system – and also reduced the physical size of the Anolis fixtures. 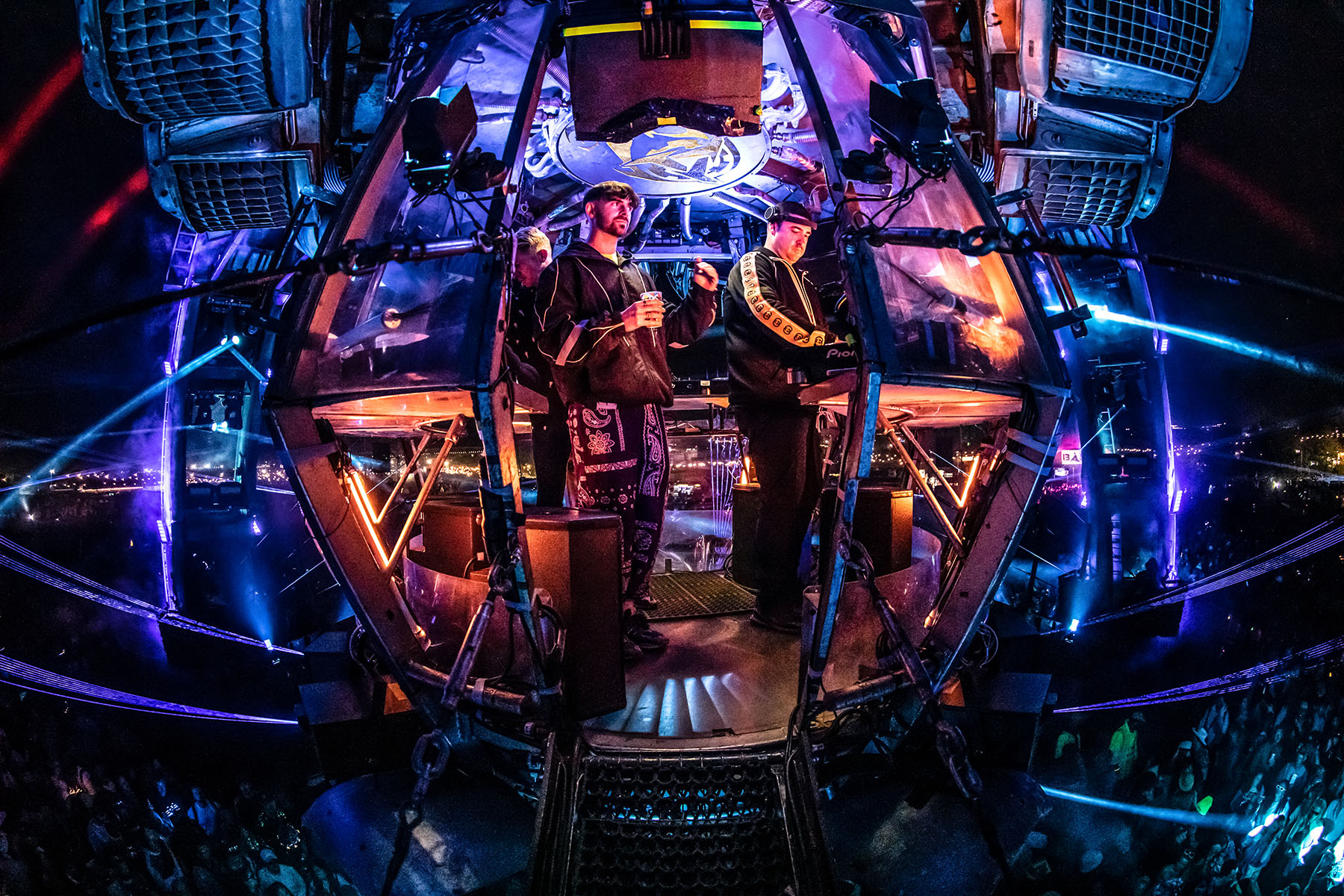 Katie reiterates the great support they have received from both the Robe and Anolis UK teams over the years.

“It was a terrific experience to bring the Arcadia Spider back to Glastonbury 2022 with the support of Robe products which helped us bring the Spider to life, illuminate the dancefloor and boost the energy levels.

“Using the IP rated iPointe 65s meant we could just install them and not worry all weekend which was fantastic, and it was generally brilliant to be back in the fields again with both old and new faces on the Arcadia crew.”

Dave Cohen collaborated with Pip Rush on the Spider’s overall show lighting aesthetic this year, and ran lighting fully live each night for the mega-mix of DJ sets, which, as always, included extensive sounds and genres from around the world including some impressive names like Carl Cox, Calvin Harris, Camelphat, Groove Armada, Chase & Status and numerous others who were attracting audiences of up to 50-60,000 across Glasto’s three main nights of music.

Pip elucidated on how the 360 degree nature of the Spiider ‘arena’ space lends itself so beautifully to funky geometric lighting displays. “When we’re building it people sometimes ask if we bought a smaller spider stage with us and we always have to explain that the lights and the crowd are actually what make it enormous” related Pip, “but no one ever asks us that when the show is kicking off!!!”

Dave added, “It was fantastic to be back and especially with the Spiider as that has been five years … and a little bit nerve racking until everything was up and running.”

He “really enjoyed” using the Robe iPointes and appreciated its super-brightness, noting that not having to weatherise and bag them up each night was great for the crew. He also still likes the standard Pointe, commenting, “it’s been a great work horse for some time now and they still cut the mustard!” 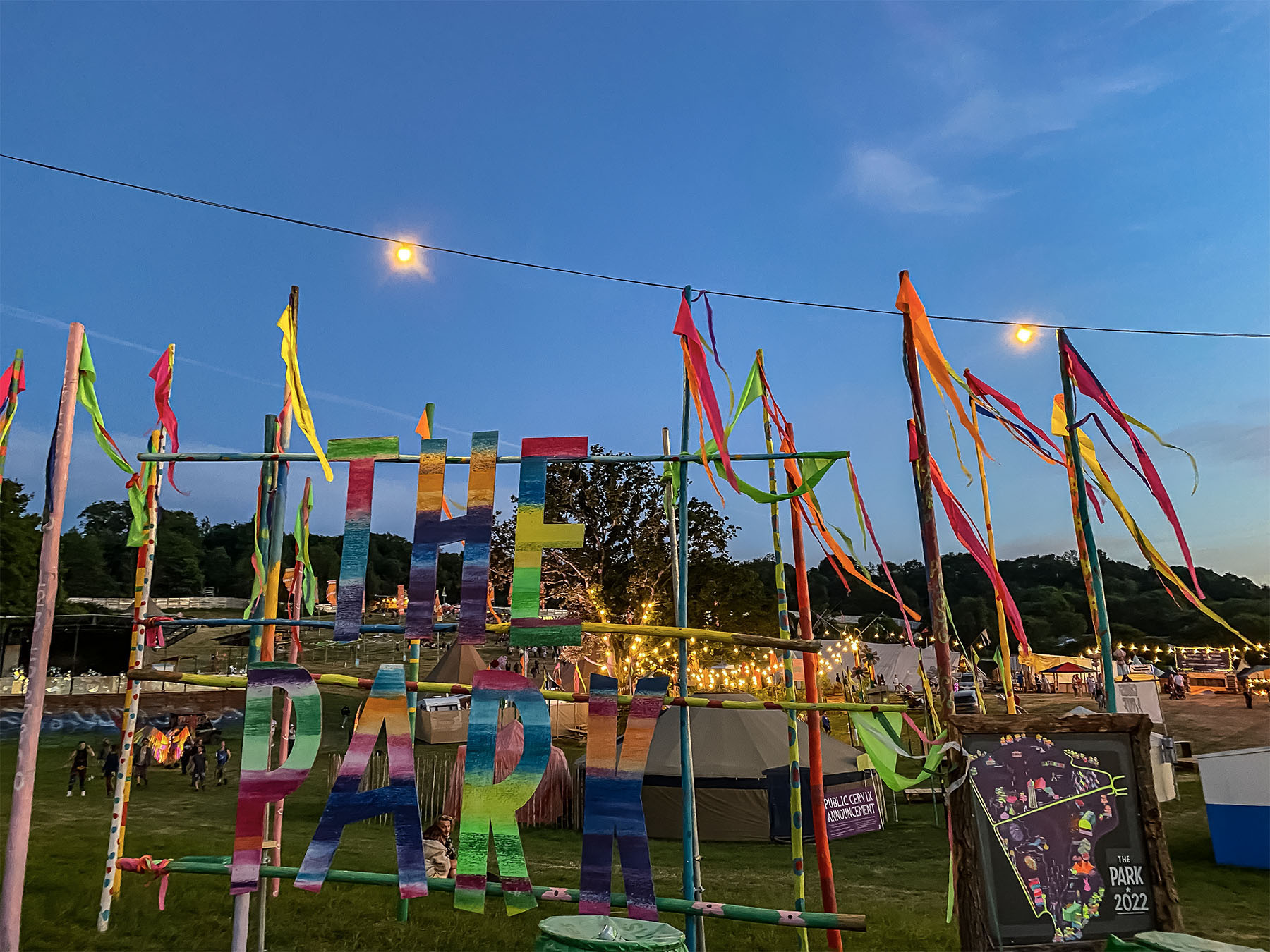 SWG Events have been lucky enough to have supplied the Park Stage with audio and lighting since its inception in 2007, founded in a natural amphitheatre on the ground rising up above the Spider, and famous for its ribbon tower which reveals panoramic views of the site and undulating countryside.

The Park Stage has a high-profile line up – anything from punk to funk and this year including Jessie Ware, Wet Leg, The Avalanches, Four Tet, Arlo Parks, and Dry Cleaning who delivered a string of jaw-dropping performances and brilliant collaborations.

The production lighting design is crafted to satisfy all riders and offer a great show for artists lit with the house rig, all facilitated onsite by production manager Mark Bott and Alex Merrett who designed the set.

The LEDBeam150s and 350s were rigged on the side trusses and LX1 with MegaPointes on LX1 and LX2 and Spiiders on LX2 and LX3.

The Spiiders – running in wide mode for full pixel control – were used as cool eye candy effects lights; the MegaPointes added dramatically the beam work and general gobo effects augmented with the LEDBeam. 150s from the side which were also used to stream wash light in from the sides and accentuate the depth.

The LEDBeam 350s on LX1 were helpful as additional front light, while those on side trusses doubled up to boost the beams and extra colour effects. 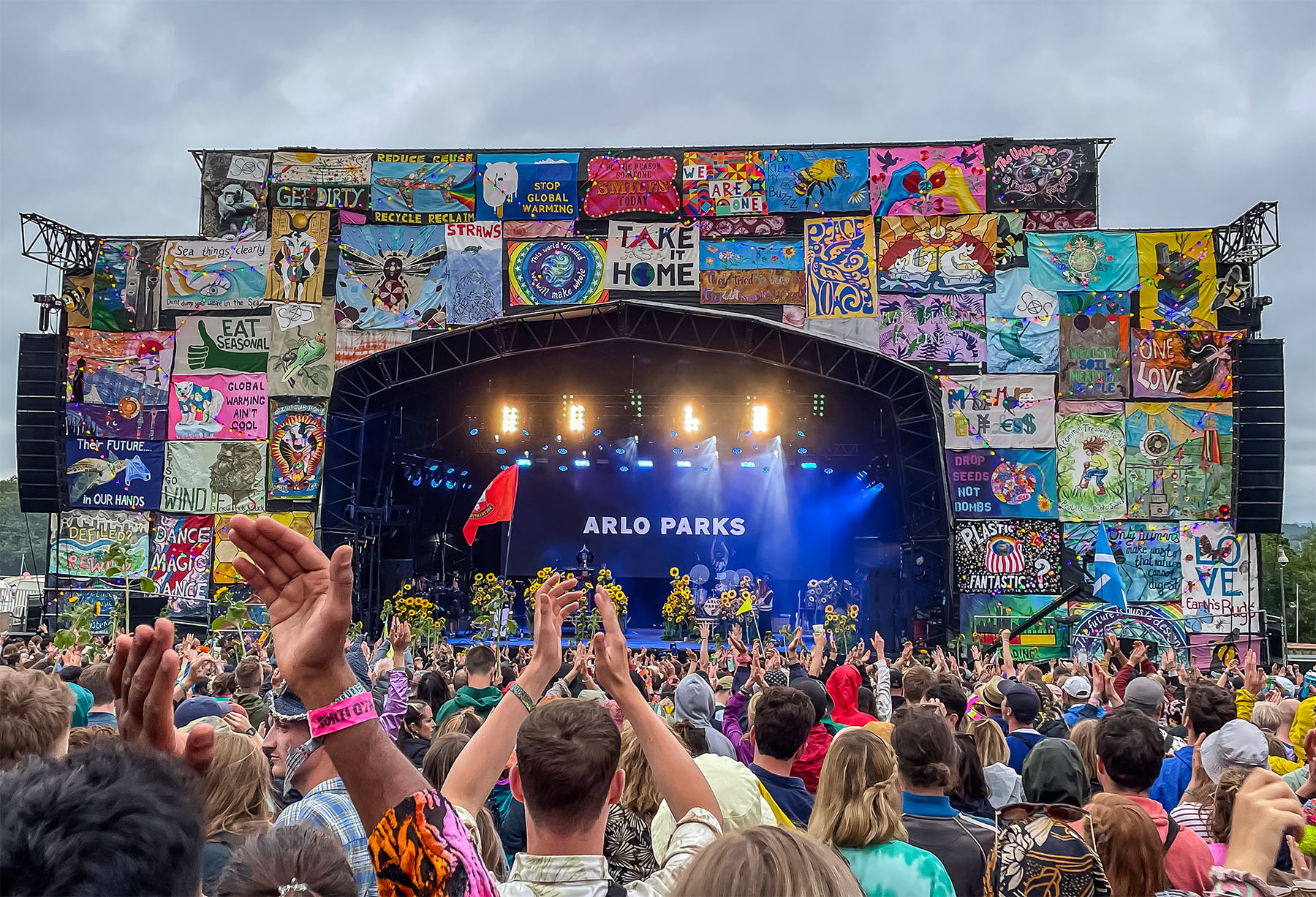 Four Tet’s LD Ed Warren, known for his cutting-edge creative eye, made the most of all the MegaPointes – chosen for their signature beam, gobo, prism looks – together with 5 large mirror balls.

Fresh from winning the 2022 TPi Award for ‘Lighting Designer of The Year’, Tom Campbell lit Arlo Parks on the Park Stage and commented, “This was a very special show for everyone involved.  We took a creative decision to focus on scenic and video elements this summer so it was a welcome sight to see the house rig full of Robe products as I know what they can bring to a show! High quality output and colour palettes that add depth and emotion.”

Mark commented that there are “numerous” reasons they choose Robe for an event like Glasto! ”It can be a challenging environment with the unpredictability of the great British summer. The fixtures we deployed this year were faultless, no failures and rock-solid performance!” He added that guest engineers and LDs are generally very happy to use Robe.

Asked what’s so enjoyable for him and the SWG team being there and working the event, he elucidated, “The Park gives us the best possible scenario of any festival stage – huge named guest artists, eclectic content, and balancing the production of breath-taking live shows with lighting for a wider TV audience. It’s a challenge we love and relish and one of the many reasons we continue to work with Robe as a brand.” 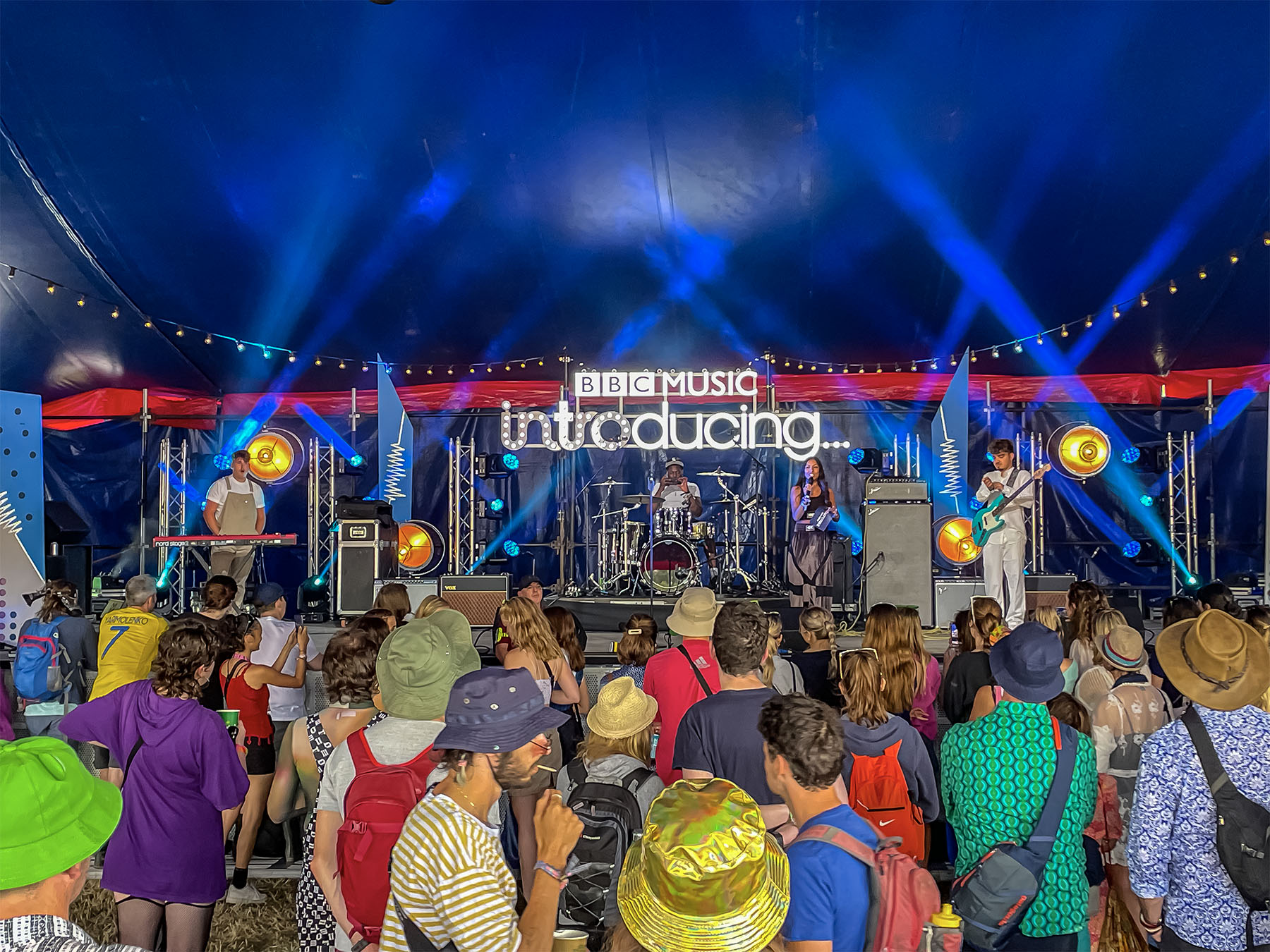 Lighting kit for the BBC Introducing stage was delivered by SWG Events with a production lighting design by Alex Merrett that was programmed and operated by Callam Thom and Will Owen.

It is one of several stages around the site supplied by the Bristol-based rental specialist.

Part of the rig this year were 8 x Robe LEDBeam 150s, 16 x LEDBeam 350s, four PATT 2013s and six Pointes, all of which made a big impact and added colour and movement to the various artists appearing on this popular stage.

The four PATT 2013s were also on the vertical trusses, with the six Pointes on the deck at the base of each tower.

The LEDBeam 150s and 350’s on the truss uprights worked brilliantly as eye and camera candy and for aerial effects and beams and were able to do some neat tricks when zoomed out and strobing for some of the heavier moments, like a surprise high energy performance from Idles! 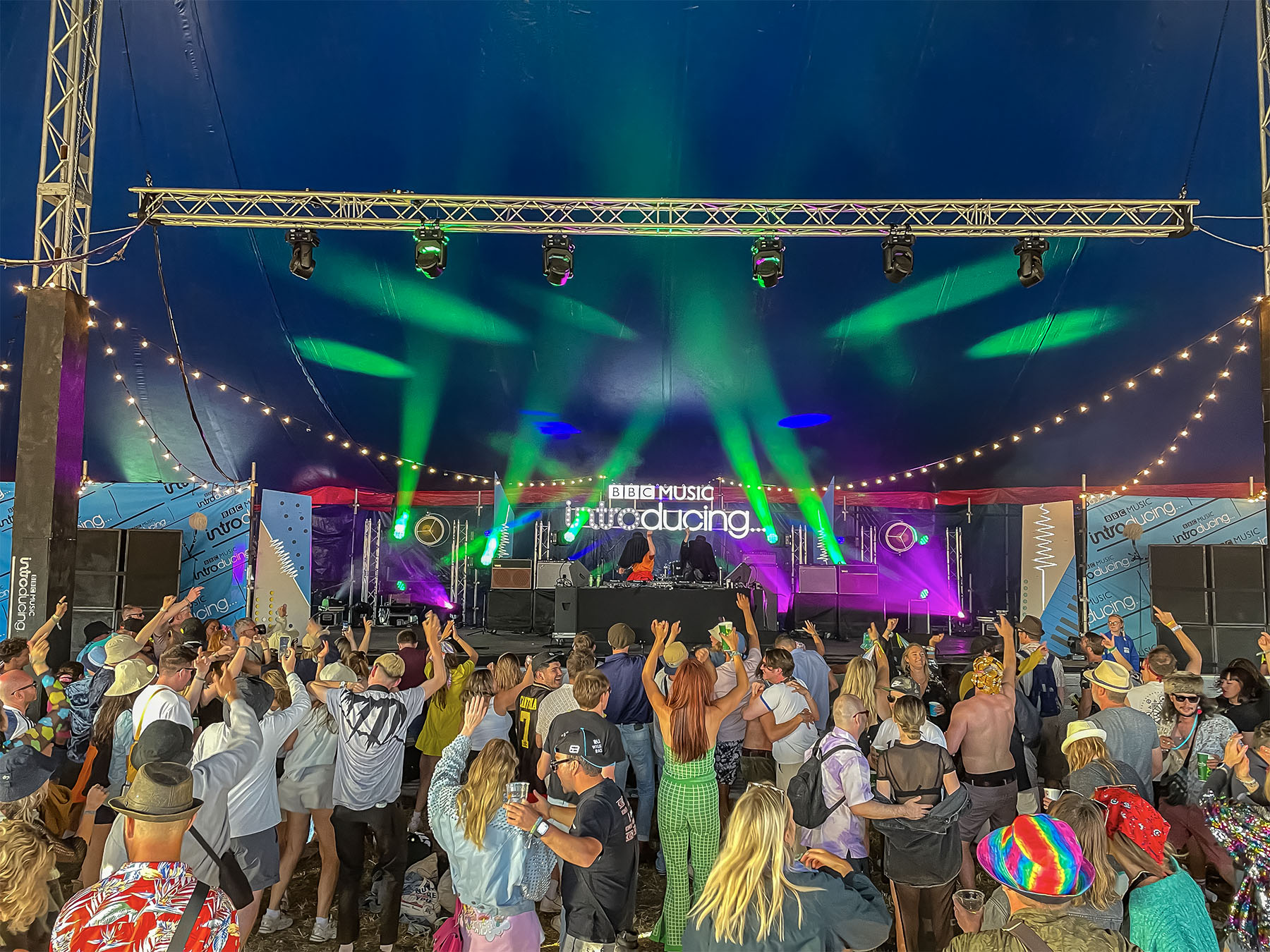 The Pointes were utilised to deliver hard beam effects and classic prisms and break-ups to contrast with the softer LED Beams. The PATTs introduced a nice tungsten glow into the mix and were “beautifully scenic in their own right,” commented Callam, noting that this was “perfect” for the more intimate moments and for closing down the stage space.

Both types of LEDBeams were also used as front light, positioned on both the truss and the deck.

Callam and Will appreciated the LEDBeam350’s wide zoom which makes the fixtures a good, solid, adaptable choice for creating anything from fat beams to wide strobes to controlled front light and even a medium wash!

In addition to the Idles surprise set, the team enjoyed lighting Thursday night’s Radio 1 dance show. It attracted a large and enthusiastic crowd and “is always a highlight,” stated Callam. 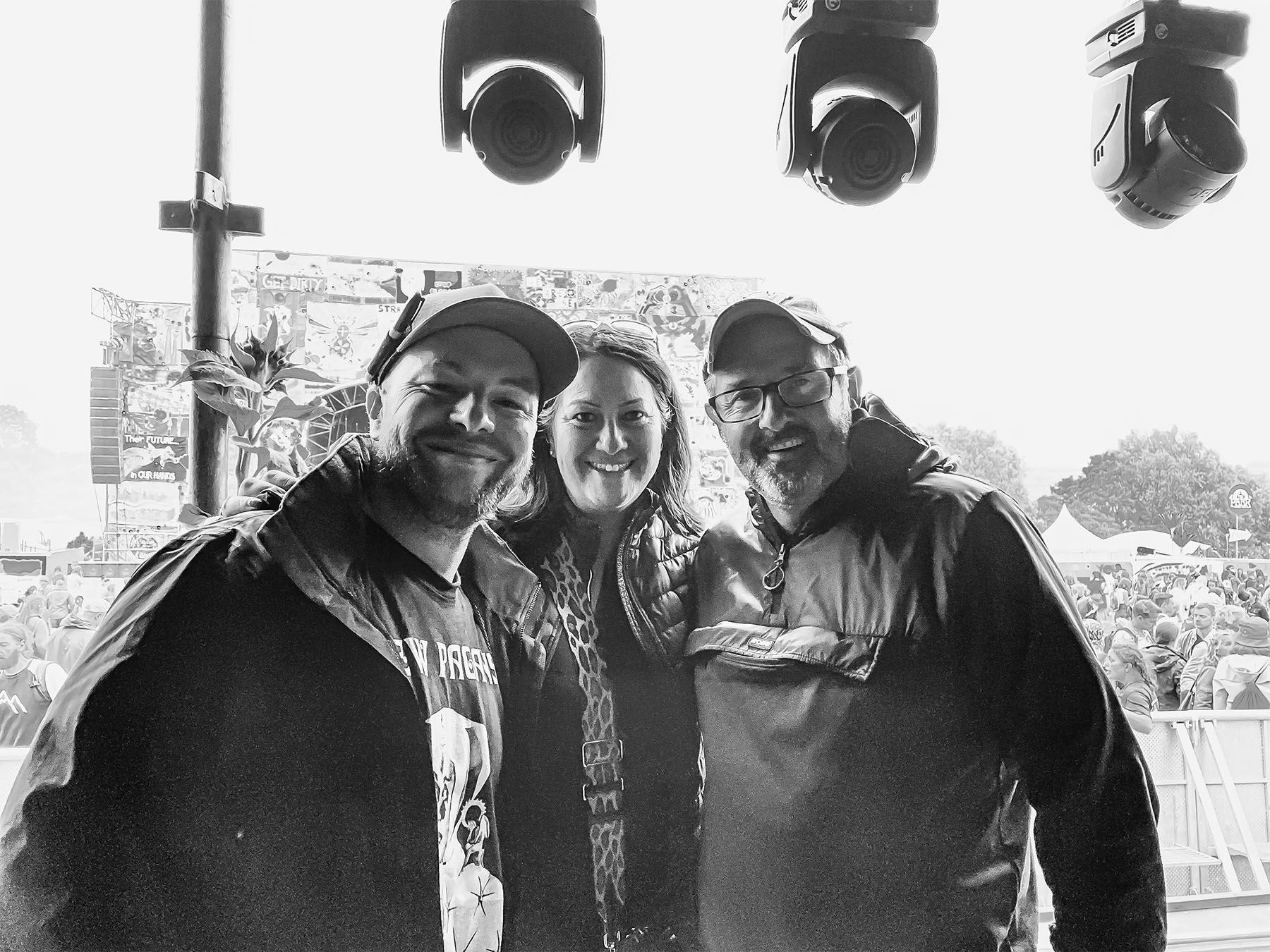 Over 200,000 people were lucky enough to enjoy an awesome line up plus outstanding music and performance entertainment over the festival weekend. It was a major operation to co-ordinate and produce, but amazing to see it enriching the festival calendar once more and be a resounding success for all organising and attending.

The three Pyramid Stage headlining acts were Billie Eilish, Kendrick Lamar, and Paul McCartney, with Diana Ross performing in the Legend’s slot. The Other Stage headliners were Foals, Megan Thee Stallion and The Pet Shop Boys, and they were just the tip of the musical iceberg leading a weekend of diversity and vibrance.

The live music action at Glastonbury 2022 was opened by the President of Ukraine, Volodymyr Zelensky, who delivered a special address to festivalgoers via remote link. He described the event as “the greatest concentration of freedom” and encouraged people to stand together and help restore peace in his war-torn country.