English rock duo Royal Blood has called on Britannia Row Productions to provide audio support for their 2022 tour cycle, which started in Swansea, UK, in March, carried on through Europe, across the US, and straight into a packed festival season this summer. 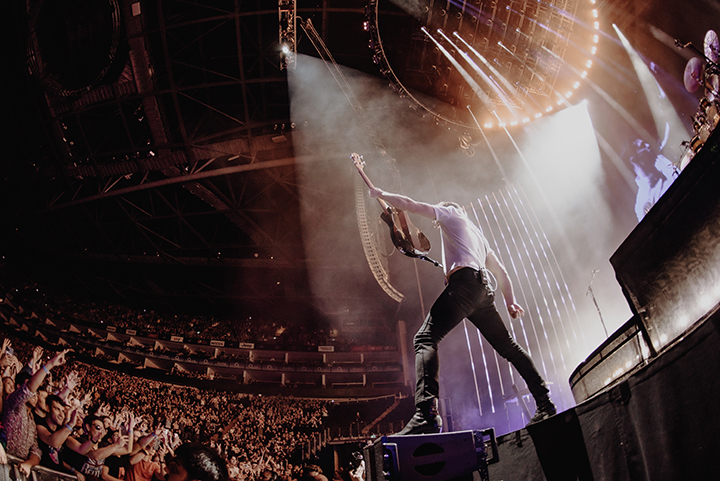 The band, consisting of bass player / vocalist Mike Kerr and drummer Ben Thatcher, needed a fearsome audio setup to transmit their unapologetically bombastic sound – a requirement that was now well-known by their regular supplier, Brit Row.

“We moved to Brit Row at the beginning of 2015 when we needed to move into full production,” says the band’s FOH Engineer, Phil Jones. “We needed the support of a firm that could deliver on a global scale, particularly in the States. It’s always reassuring that we can receive gear from Brit Row while we’re out there, as well as sourcing other essentials from Lititz, PA where parent company Clair Global is based.”

One of the cornerstones of Jones’ arsenal is his Yamaha PM5 Rivage console, a desk in relatively short supply outside of Brit Row’s well-stocked warehouse. It was secured by Brit Row Director and Royal Blood account handler, Lez Dwight.

“We started using the Yamaha for recording in the autumn of 2020, but it was always the idea that we would eventually take it out on tour,” says Jones. “I’ve been really happy with it so far. I hardly use any outboard now and it’s been really solid, so I’ve got no reservations about continuing to use it worldwide.

“The band’s sound has changed a lot since they added a keyboard player – a close friend of ours called Darren Watts – so the input list has expanded to include some samples, though there’s still no track or click to be heard. The main change is that I’ve actively made everything quieter, as it was a little too loud before, in my opinion. I want it to have serious impact, like it always has, but refine everything and try to pick out the finer details a bit more.”

This dynamic mixture of retaining power while preserving intelligibility was a difficult one to perfect, though the choice of an L-Acoustics PA system was a key ingredient for Jones and his PA Tech – Brit Row freelancer – James Collee.

Jones’ initial vision for the tour was that the PA setup should consist of an L-Acoustics K1 / K2 system, with flown subwoofers for the upper / side seats to mirror the bass impact that could be felt at the front of stage.

“I designed systems for all the venues, trying to fulfil Phil’s remit as closely as possible,” notes Collee. “I’ve had a long and happy working relationship with Phil and Royal Blood over nearly eight years and, during that time, I’ve come to understand what Phil wants from a system and how best to complement his mix and the guys on stage. Phil is great to work with as he has a genuine interest in the PA design and trying new ideas. He also accepts when it’s not possible or may not work, and throws out a decent mix too, which helps considerably!”

Collee went on to explain that Royal Blood has long favoured an L-Acoustics PA system, as the sonic signature and presence complement everything the crew looks for when designing such an impactful rock show.

“L-Acoustics provide excellent turnkey systems that match response through their entire range, irrespective of whether it is main hangs or front fills,” he says. “The constant evolution of their prediction and amp control software and the ability to integrate these functions make the workflow much easier and give very consistent results when compared to their Soundvision prediction modelling.” 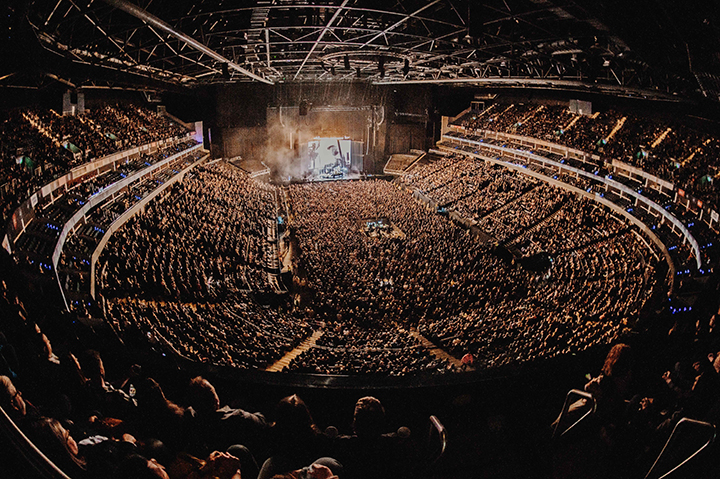 The choice of K1 was an easy one for the crew to make, considering the size of the venues that would be hosting them, while the K2 was a happy companion for the downfills and side hangs required on most dates.

“The option to affect the dispersion with the louvres means some energy can be directed from where it’s not required, mitigating some reverberance issues and improving stereo imaging,” explains Collee. “We’ve always used a fair amount of sub energy in order to get the full impact of Mike’s bass. On this tour, due to the size of venues, we were able to make sure that the audience up in the furthest reaches of the arenas had a similar experience to those on the floor by utilising flown subs.”

In addition to the flown subs, the crew deployed a large arc of KS28 subs in front of stage for floor impact. This front line was complemented by a wrap of A15 speakers on each side of the stage as outfills, and Kara speakers distributed across the front subs in pairs as frontfill. The system was entirely driven by LA12X amplifiers, while a P1 processor allowed the crew to run redundant AVB with analogue back up to every unit.

“As always, a PA design is only ever as good as the crew that deploy it,” says Collee. “To this end, I was very lucky to have Luca Serge and Megan Clements with me, who did an exceptional job every day and were an absolute pleasure to have out on the tour.”

Monitor Engineer Darren Connor is a relatively new addition to the Royal Blood crew, initially joining in July 2021 as cover for long-term Monitor Engineer, Dave Bennet. Connor was already familiar with Brit Row from his position as FOH Engineer for singer-songwriter Laura Marling.

“I’ve always been well looked after by the team at Brit Row,” says Connor. “The way the systems are packaged are always logical and as compact as they can be, and Tim Mole has been exceptional in going above and beyond to get things to us last minute when sudden changes occur.”

For this Royal Blood tour cycle, Connor switched from an Allen & Heath SL5000 to a Yamaha Rivage PM5.

“I like to keep myself up to date with the new technologies available, so I also had a training day at Brit Row with Yamaha and decided to make the switch,” he says. “The on-board Portico 5045 is exceptional at reducing the stage spill in our singers’ vocal mics. I love the natural sound of the Bricasti reverbs and lean heavily on the dynamic EQs on the vocals themselves to help keep them as controlled and natural sounding as possible.”

Connor reiterated Jones’ sentiments about the importance of working hard to ensure the sounds at source are as good as they can be, as well as singling out the strengths of the DPA microphones chosen.

“The kit is tuned incredibly well and sounds great, and the DPA4099 on the toms are very natural and capture them precisely,” he adds. “Mike’s bass / guitar sounds are run through four Neural DSP Quad Cortex units, which mimic his old amp set ups for each album. This means that creating a natural, controlled in-ear mix is relatively straightforward. Both of them are happy with the standard ‘FOH with their instrument a bit louder’ mix, and I use a side fill on stage right to add a bit of weight for the kick drum and sub bass, and a thumper for drummer, Ben.”

Collee, who started his career loading trucks and painting speakers Brit Row’s warehouse before going on to become an established freelancer in his own right, concludes: “I’ve worked for Brit Row for nearly 20 years, so the choice to use them as a supplier is always a no-brainer for me,” he says. “They provide great kit, great support, and great people. In my opinion, they’re among the best in the business, and the care and professionalism they’ve come to exemplify can be seen in the quality of the new generation of engineers coming through their ranks.”