After two lost years for sports and music en-masse, German audio technology and solutions company d&b audiotechnik is delighted to report that London’s iconic Wembley Stadium is now preparing for its longest concert season yet – with a permanently installed d&b sound solution. 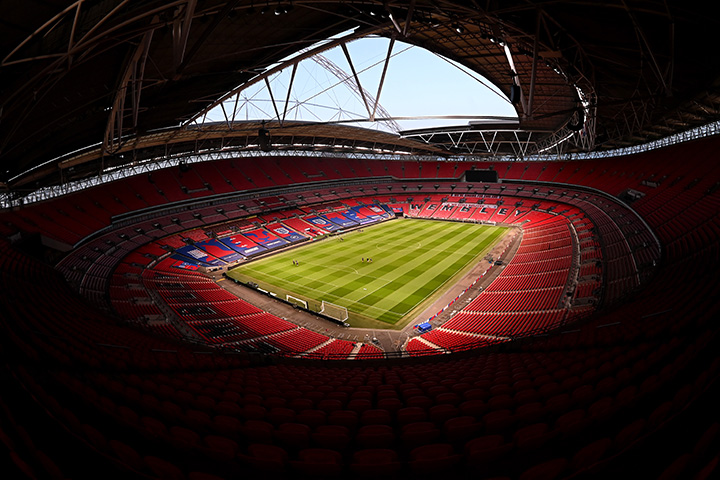 Since hosting its first FA Cup Final in 1923, Wembley has become synonymous with English football. Today the stadium’s sporting calendar invites a global audience with events as prominent as the UEFA EURO 2020 Final and the 2012 Olympic Games. Then there are the A-list artists, from Beyonce to Coldplay, whose legendary concerts have made Wembley a mecca for musicians.

Despite its historic stature, Wembley is not resting on its laurels. Driven by the need to remain world-class the stadium is continuously evolving, benchmarking itself against the competition. “One area that we knew would add value to our guests and clients was upgrading the bowl audio,” explains Liam Boylan, Stadium Director. “ The previous system was not specifically designed to be used for the delivery of music and that was becoming increasingly apparent; we wanted to offer our clients a state-of-the-art system that they would never consider not using!

“d&b offered a solution that would elevate the audio experience for our fans – for all of our events – and thus keep our standards as high as possible.”

In simple terms the brief was straightforward: ensure the person sitting in row one, level one, experiences the same quality of sound as the person in row forty-eight, level five. Additionally, the system needed to be lightweight to stay within roof loading limits, appeal to both the music industry and sports organisations, and integrate with the existing network as part of the stadium’s life safety system.

Mervyn Nock is Audio Visual Manager for The FA. “With the d&b system, PAVA compliance was a given, so instead of thinking about baseline intelligibility we could focus on performance quality expectations. Before the installation, we rigged an array of d&b loudspeakers to give Wembley’s senior leadership team and various stakeholders an A/B comparison. The difference surpassed everyone’s expectations; not only was music much clearer, cleaner and brighter, but speech was so much more intelligible, more authoritative.”

Steve Jones, Head of d&b Education and Application Support EMEA, was tasked with the system design. “Because the Wembley bowl is so high and so steep we needed to propose a single system that was up to the task of properly covering the large vertical geometry from front row to the back of the upper tiers, provide horizontal consistency and be suitable for both sports events and augmenting concert productions.” 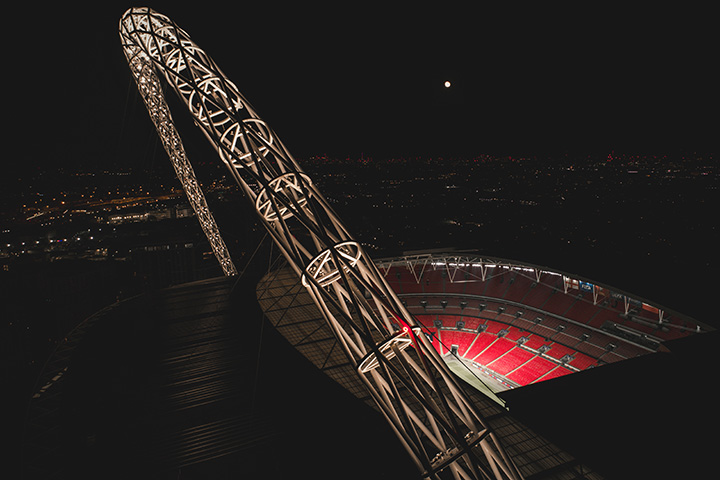 “I’d be asking what would the system do when it was in sports mode,” Jones continues, “and what did that full coverage need to be; and then with, in effect, a smaller array formed from the top cabinets, check that we still had a system that could deliver concert sound levels into the top tier. My next consideration was informed by our observations of concert productions at Wembley; the best results involved the deployment of a ring delay system.”

Jones set about honing his design, moving between the venue’s two principal modes of operation – and started asking a different set of questions. “This was the light bulb moment when I realised that for optimum performance from a single system, I needed to talk to Wembley’s technology consultants, Vanguardia, about the possibility to rotate the arrays and deploy them at an overall lower height, in the North and South stands. Eventually, after lots of toing and froing, we were able to define the arrays’ optimal height and position to do both sports and concerts really, really well.”

Ultimately what Jones, in collaboration with Vanguardia, structural engineers OPS and integrator RG Jones has achieved is more than a two-for-one solution. “Thanks to ArrayProcessing it’s now possible for Wembley to create upper and lower zones, and to easily offer multiple performance layouts,” explains Jones. “And switch from sports mode to concert mode without any compromise in quality.”

As any venue knows, flexibility is essential to owning a truly multipurpose reputation, and Nock is in no doubt about the scope afforded by ArrayProcessing. “There’s always been a strong, valued partnership between UEFA and Wembley over the years, and they were pleased to see the d&b system installed and available to use for UEFA EURO 2020. During the championship, a twenty metre long temporary press area was built over 6-8 seating rows and UEFA requested a lower sound level in this area; this was achieved by a reduction of as much as 12 dB with spectators in front, behind and to the sides still experiencing the full sound level. It’s been invaluable.”

As sports fans and music lovers make their way back to the bowl, there’s an uncompromising audio experience waiting in the stands, in all 90,000 seats. Add the prospect of a significantly bigger concert season this summer and 2022 at Wembley looks set to give next year’s centenary year a run for its money. “We must be a stadium that artistes want to use and fans want to go to,“ concludes Boylan, “and to do that, you have to remain ahead of the curve and not rely on history alone. The d&b audio system is a huge part of that and I am delighted to say that the sound in our stadium now matches our iconic name.” 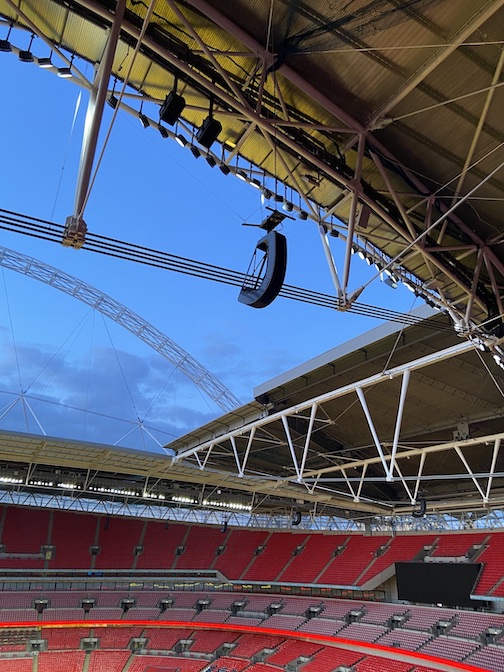 A critical advantage of the d&b system is the ability to rotate the arrays. During sports events the arrays are in their default position, on axis with the spectators’ seating position. In concert mode they are rotated to optimize the acoustic path between the stage and the audience in the upper tiers, enhancing the listening experience.

Installation specific 30D amplifiers are housed on two fifty metre high gantries running along the length of the pitch, alongside floodlights, control networks and power distribution, broadcast technology and IT infrastructure.

Installation
The sound system installation took place during winter 2019 by AV company, RG Jones. Just three months were allocated to design, fabricate, and install the new system with several large projects taking place simultaneously including relaying the pitch and installing an LED floodlighting system. Due to the tight timescales and number of interfaces, the programme was planned to the highest level of detail. The project teams met daily to collaboratively resolve risks, address technical uncertainties, and to monitor safety, progress and quality.

Commissioning of the audio system was completed in time for the EFL Carabao Cup Final in February 2020, just weeks before the first Covid-19 lockdown.

UEFA EURO 2020
Following the Carabao Cup 31.03.2020, football at Wembley was audience-free or at significantly reduced capacity until UEFA EURO 2020 in June 2021 – at which point resident DJ Tony Perry put the new audio system through its paces:

“The sound at Wembley during EURO 2020 was incredible. I received messages from so many fans saying it was the ‘best atmosphere they’ve ever experienced at a football match’. This level of fan interaction would not have been possible without such an incredibly enhanced sound in the stadium.

“I’ve been fortunate to play at many stadiums. At Wembley this summer, there was a notable difference in clarity and depth. Whether the stadium was at its lowest 20,000 cap audience, or during the epic closing ceremony, the sound was remarkably well balanced. Perhaps what stood out most, was how the sound maintained clarity both at low level, and when being pushed to its loudest. It’s something I hadn’t experienced in a stadium environment before.”