Avolites has performed a spectacular return to Glastonbury 2022. A total of nine Avolites consoles and four media servers were specified for the world famous event that has attracted around 200,000 attendees this year and has offered a spectacular deployment of the latest audiovisual innovations. Avolites products have lighted up nine of the main sites, including Temple, Totem, RumShack, the three Bloc9 areas, Theatre, Cabaret and Salon Carousel, and individual production teams brought in Avolites kit for additional performances on The Pyramid, the main stage and Other Stage. 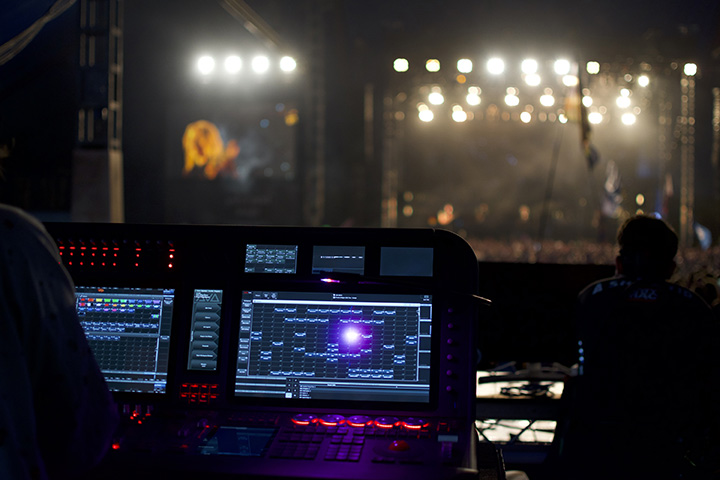 For Avolites, the return of Glastonbury, following a pause as a result of the Covid-19 pandemic, has marked the festival debut for its flagship console Diamond 9, the most innovative and advanced console range to date. It was the demands of Bloc9 East, hosting ICON, the epic monument which debuted at Glastonbury in 2019 and featuring a 65ft head as its centerpiece, and a number of alternative performances, that led the D9-215 to be used to control the lighting for his stage. Offering intuitive and integrated control of all visual aspects of the show, the compact version of the Diamond collection would provide the perfect support.

The Common, combining venues The Temple, Mez Yard, Rumshack and the new Totem, were largely powered by Avolites AI Q3 media servers bringing to life performances of Emily Dust, Jelani Blackman, Lazy Habits, Enny, Grove, and many more. The new Totem area was lighted up using a combination of an Avolites Quartz console, supported by a Titan Mobile Wing to expand the live performance space, and powered with a Q3 server.

On the other side of The Common, The Temple saw a range of spectacular lighting acts using an Arena console, powered by the Q3 server. The lighting of the most infamous all night party at the Rumshack also trusted Avolites and relied on the power and portability of the Tiger Touch II console.

“The Avolites team was thrilled to be back in the fields of Somerset and we are thankful to all those LD’s that adopted Avolites as their console and platform of choice to power their ultimate performances. It has been a great kick off to the festival season and we are looking forward to the upcoming performances lined up for this Summer.” said Paul Wong, Managing Director of Avolites.