Coldplay’s “Music of the Spheres” U.S. tour kicked off in North Texas at the Cotton Bowl followed by dates in Houston and Seattle and continued through mid-June. The band’s sustainability initiative for this tour is adapting all tour operations to minimize CO2 emissions in line with the best science and practices from set build and travel to freight, power, and sound. The tour will plant one tree for every ticket sold with a portion of the proceeds earmarked for a variety of green initiatives around the world. 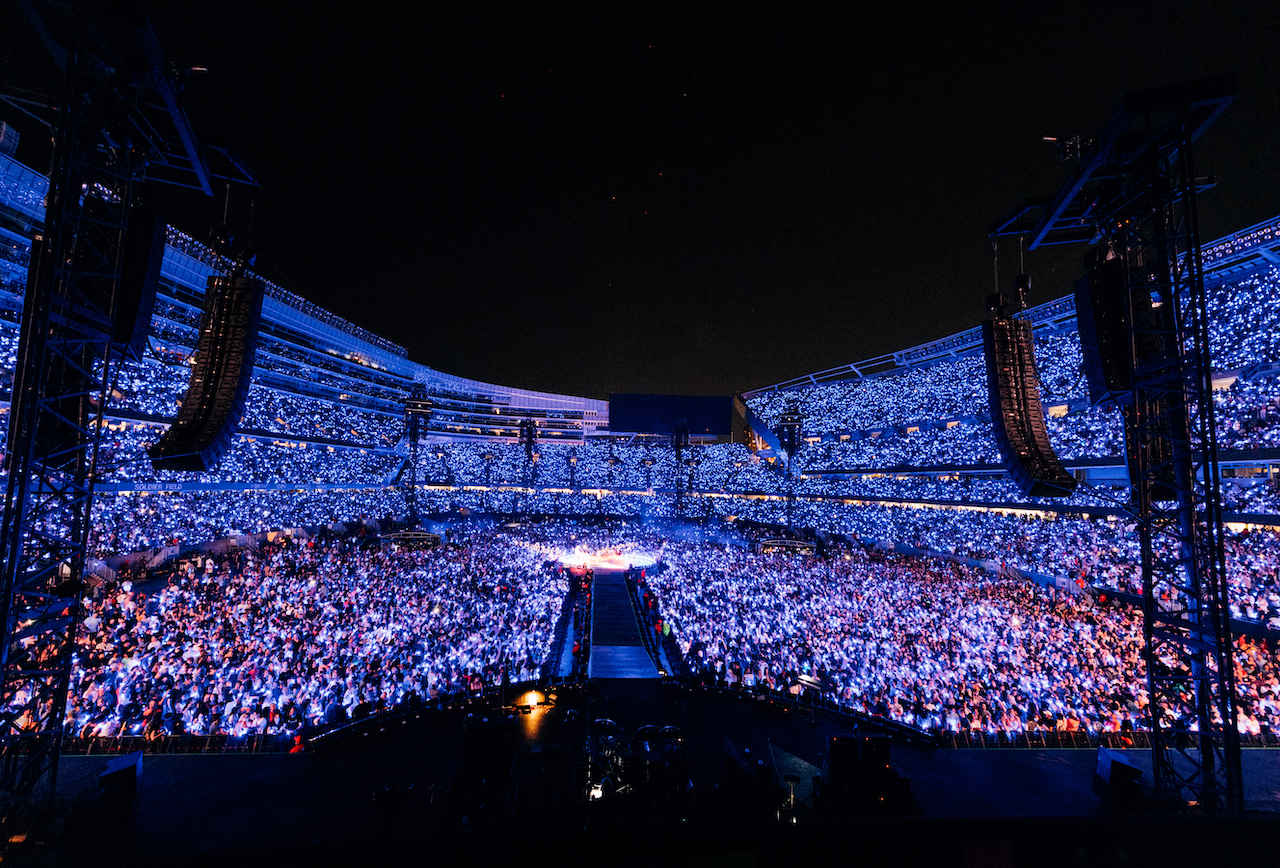 The Coldplay camp has required that the sound system be 50% more energy efficient than their previous tour in 2016-17. With that pre-requisite, Firehouse Productions (NY) who has supported Coldplay tours since 2016 has decided to deploy d&b audiotechnik GSL and KSL loudspeakers for their efficiency, paired with D80 amplifiers that demand less input power and enhanced energy saving features. “Firehouse supports the European Coldplay dates alongside Wigwam; while Firehouse is handling the PA in the states, Wigwam will be providing production later this year when the tour heads to Europe,” states Nick Bechard, Account Manager, Firehouse Productions. “It is a joint effort that has worked very well.”

d&b SL-Series was developed with efficiency in mind, reducing power requirements by up to 50% for equivalent sound pressure output levels compared to former systems. In addition, precise control of directivity continues to be one of the hallmark features of SL-Series, keeping sound where it is needed.

“99% of the venues will be outdoor, as in Stadiums with no roofs,” states Tony Smith, head of audio and sound designer for Coldplay. “As the sound limits within and outside the stadiums in Latin and North America are not monitored, use of NoizCalc has not been implemented yet. Once we get into Europe, sound emissions will be an issue and NoizCalc will be a useful tool, but with ArrayProcsessing more so, I can predict what will stay in the stadium and at what level. Also, with SL-Series and its full-bandwidth cardioid pattern, the lack of sound from the back of the array will also help for any upstage level monitoring where the sensitive areas usually are.”

d&b NoizCalc was developed in direct collaboration with SoundPlan for predicting environmental noise pollution into the surrounding areas of an outdoor performance. It can account for topography, buildings, wind speed, air temperature and humidity.

Using d&b Array Processing, refined control of level distribution and tonal balance can easily be achieved. Smith added that ArrayProcessing has become a vital tool “as mentioned for regulating sound emissions, but also sound levels within the stadiums. There are some sites that the loudest area of the audience is monitored for audience protection against hearing damage. With J-Series the local authority was surprised with the uniform sound level across the audience area, and now with SL-Series I am happy to continue this consistency.”

Smith said they are sending data to d&b audiotechnik R&D so they can monitor the power usage. “This is very positive and forward thinking. I had a lot of data from Matthias Christner [Head of R&D Acoustics at d&b] leading up to the tour so I could pass on our power needs and details as well as to see what d&b was doing to reduce power consumption, which is up to 50% less from our last tour. Production is obviously very happy with our reduced power consumption as well as the improved truck space.”

The first leg of the tour was in Latin America. Due to weight issues and the environmental footprint of shipping tons of sound equipment, Firehouse helped arrange local suppliers and as much local equipment as possible using predominately J-Series with SL-SUB. “We had a great result and picked up where we left off in 2017 but we were looking forward to getting our hands on GSL; we have not been disappointed. It has been a lot of fun and it’s sounding great. The sound of the box as well as the extra low end has been amazing. Being able to take the pressure off the ground subs to do all the work has helped the band and the ability to shape the sound in troublesome venues with the various tools has been exceptional. The CPL (coupling) function has been great as well for shaping what we need. The low end in the upper seating tiers has also been greatly improved.”

“Many venues are already adopting sustainability strategies and artists have an increasingly strong desire to tour in an environmentally friendly way,” states Marc Lopez, Vice President of Marketing, d&b audiotechnik Americas. “d&b received a Green Guardian Award in recognition of the work being done to reduce the carbon footprint of the live entertainment business. We are privileged to aid Coldplay in their sustainability initiative.” 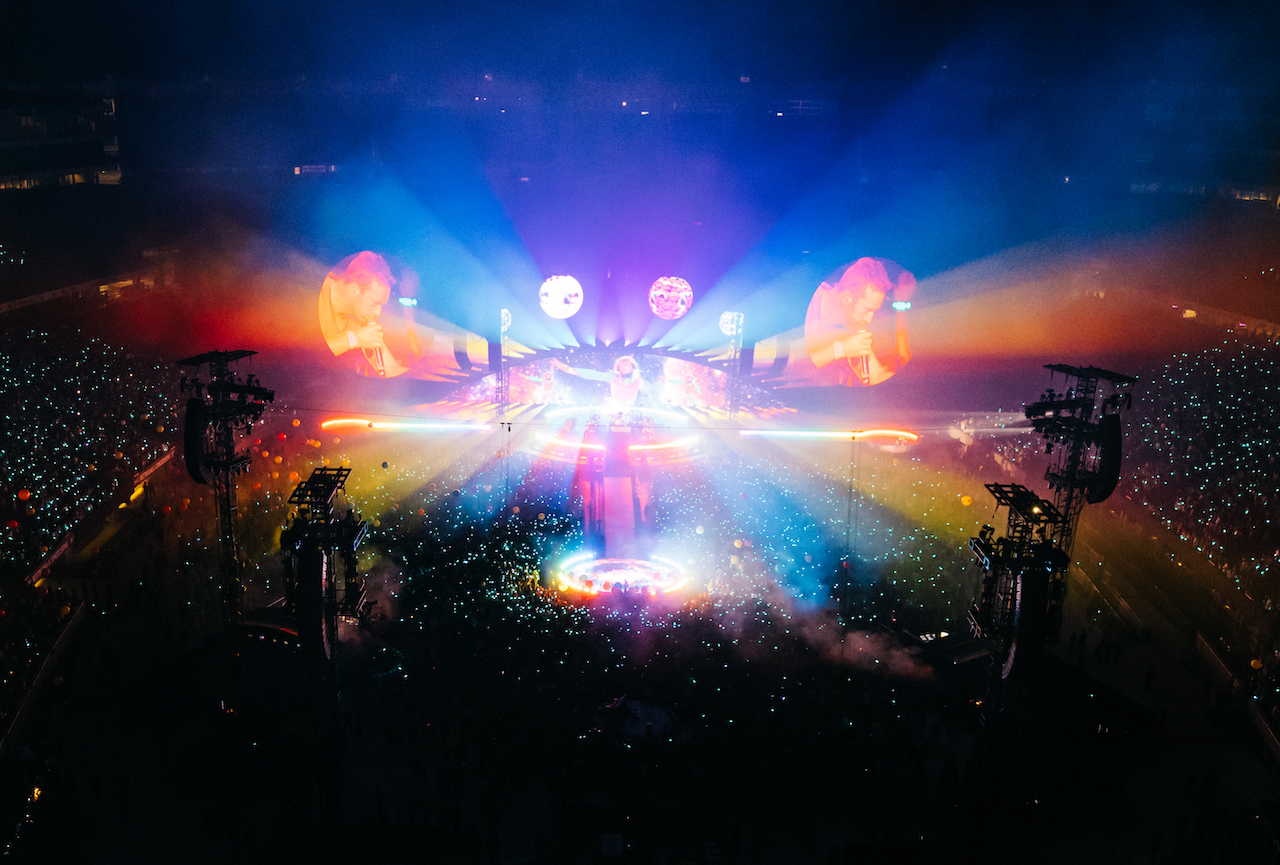 There are 116 x D80 amplifiers total: 40 per side of stage. 9 per delay tower. A Luminex Network backbone is used for amplifier control with an Optocore backbone for AES distribution of signal with an analog backup. 8 x d&b M4 stage monitors handle the various acts popping in and out of the tour.

As of press time, Smith said he received word the tour will be using the new D40 amplifiers on ring delays for Europe shows. “We have also added three hangs per side down each side, two at the rear hung off the roof of the venue in Berlin, Paris, and Warsaw. Each hang comprises of 8 x V8s, with V12s for the rear pair (provided by Wigwam). It helps in larger venues to get even coverage but also to control the coverage better, reducing sound spill for offsite SPL readings. It definitely gives the audience a better sound experience. I’ll be happy to see how they perform. Plus, less power!”

XSL tops will be used in Europe paired with KSL-SUBs for side fill. “Now we have no sound on stage,” says Smith. “We felt the need to fill the void a little or at least have that ability to give some clean audio rather than the mush given off other PA systems. Again, the SL-Series, even in the smaller format gives a great punch at half the size and power consumption.”

CEO of d&b audiotechnik Amnon Harman affirms the company’s long-term commitment to far-reaching principles of sustainability. Since 2013, the company has held an environmental certificate. Since 2018, d&b has committed itself voluntarily to meeting the requirements of effective sustainability by participating in several initiatives promoted by the state, the federal government, and following the international principles of the United Nations. “The declared aim is to integrate these principles firmly within the company in collaboration with its co-workers, in the present and in the future.”