The Munich Kammerspiele theatre company boasts an exclusive location right in the heart of the Bavarian state capital. The architectural style of the theatre, which was completed in 1901, is visibly influenced by Art Nouveau and characterised by the colours and shapes of the early 20th century. 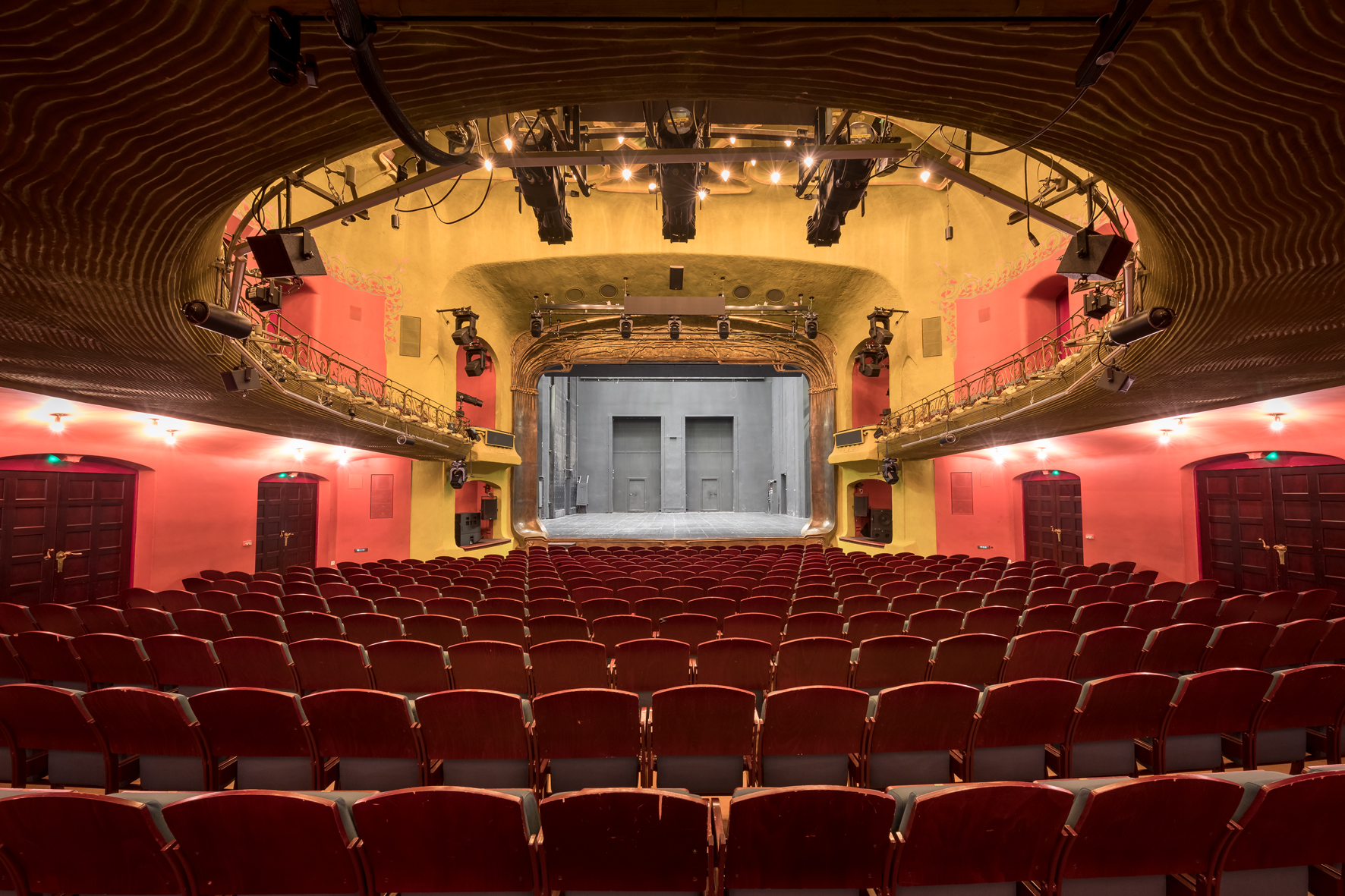 The Munich Kammerspiele theatre is stylistically influenced by Art Nouveau

Therese Giehse meets Habibi
​The Munich Kammerspiele theatre company has four performance venues. The main stage is the Schauspielhaus, which is designed as a single-storey gallery theatre. The second-largest venue is the Therese-Giehse-Halle, named after the legendary German actress. The third is the Werkraum, which can look back on almost 50 years of history. And, under the leadership of the current director, a section of the Maximilianstraße venue that was previously used as a box office has been converted into what is now called the ‘Habibi Kiosk’, which aims to create a melting pot for multinational communication and culture. The Habibi Kiosk is variously used for holding discussion groups in cooperation with the Goethe Institute, for producing radio programmes and for staging concerts – which is why it is now dubbed the fourth stage of the Munich Kammerspiele.

Sound team with audio and IT expertise
​“We are quite clearly a modern theatre of the spoken word and our repertoire is also aimed at a comparatively young audience,” said tonmeister Wolfram Schild, who is head of the audio department at the Munich Kammerspiele, where he has worked for more than 20 years. Schild is ably assisted by sound engineer/musicologist Johann Jürgen Koch and Martin Sraier, who has also gained the reputation among colleagues of being an IT expert, his specialist knowledge is always in demand when computer and network topics are on the agenda. That has often been the case of late, as the theatre is equipped with a state-of-the-art Dante network that enables digital audio signals to be distributed without loss between the various locations. The Dante network also has connections to an editing suite and, of course, to all of the control rooms, which are equipped with modern digital console concepts that are made in Germany. ​ 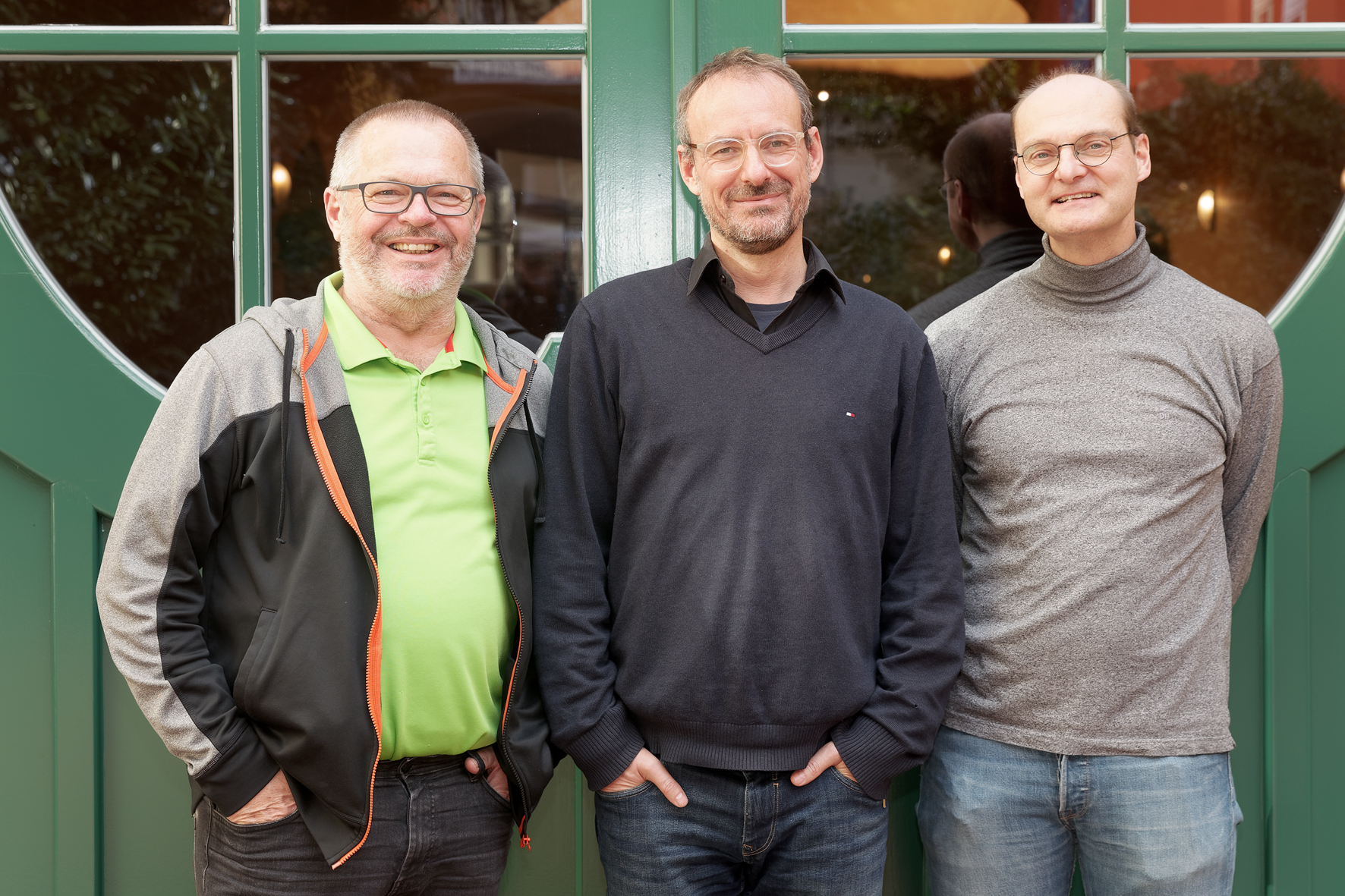 Authentic conversations instead of stilted language
​“The elevated type of language traditionally spoken on German stages is rarely used in performances at the Munich Kammerspiele: to our ears, traditional ‘stage language’ sounds really stilted and also comes across as a bit old-fashioned nowadays,” said Wolfram Schild. “Instead, the actors use colloquial language, and the dialogue often sounds like authentic conversations. This is one of the main reasons why we use Mikroports in our theatre. It’s not primarily about making the voices loud, but about conveying the spoken word to the audience in all its nuances. Of course, every so often there are also situations in which voices are placed over a musical background and they still need to be easy to understand. Sometimes, the audience isn’t even aware of the electro-acoustic amplification, but it still plays a vital role in ensuring comprehensibility, for example when the actor needs to turn away from the audience for dramatic reasons.” ​ ​ ​ According toWolfram Schild, the components of the 5000 series “were starting to show their age” after two decades of continuous use. As Schild commented: “This Sennheiser 5000 series is fantastic and is also pretty much indestructible, but the constantly increasing utilisation of the available frequency spectrum has been causing us more and more headaches in recent years. Our theatres are located right in the centre of Munich and if one of the nearby hotels is holding a major event and using a lot of wireless systems, we soon notice it. For that reason, we looked for a wireless system that is freely tuneable and resistant to interference from other users.” ​

According toWolfram Schild, the search for the perfect digital solution was “open to all results”, but after practical tests had been completed, all those responsible for the theatre’s audio equipment were of the unanimous opinion that the Sennheiser Digital 6000 systems were clearly superior to products from market competitors. The analogue Sennheiser wireless systems previously employed at the Munich Kammerspiele were not sold off following the refit, but are now used for the rehearsal stages. ​

Handheld transmitters, bodypack transmitters and a special adapter
​At the Schauspielhaus, the main venue of the Munich Kammerspiele, 20 digital wireless channels can be used for performances. At the Therese-Giehse-Halle, 12 digital wireless channels are available. And at the Werkraum venue, components from the analogue Sennheiser ew 500 G3 series provide eight channels, although a changeover to digital systems in the near future is already being contemplated. “Eight channels are definitely not enough for the Werkraum in the meantime,” said Wolfram Schild, adding that the Werkraum is often affected by external interference. ​ 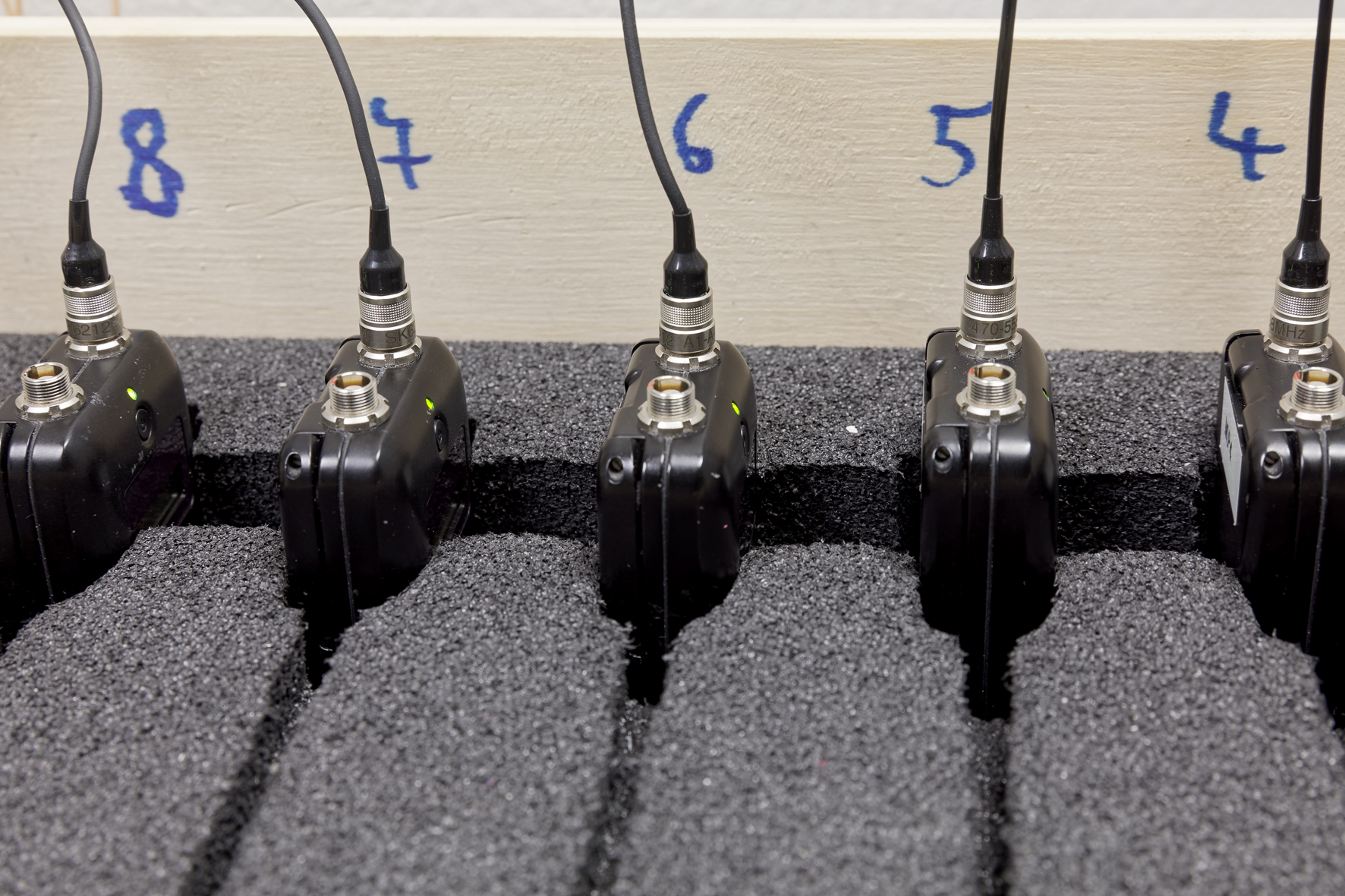 The 32 digital channels available at the Munich Kammerspiele are used with ultra-compact SK 6212 bodypack transmitters. Four SK 6000 are also available, and are used in combination with an adapter to enable conventionalmicrophones to be operated wirelessly in a similar way to using an SKP plug-on transmitter. This special solution (“P48 Phantom Power Adapter for SK 6000/9000”) with an XLR connector and lock ring provides 48 V phantom power and in the meantime is also available with the much smaller SK 6212. The microphones in use at the Munich Kammerspiele are predominantly omnidirectional Sennheiser MKE 1. Sennheiser SL Headmic 1 SB headworn condenser microphones are also available and are stored in rack drawers with specially designed foam inserts. ​ 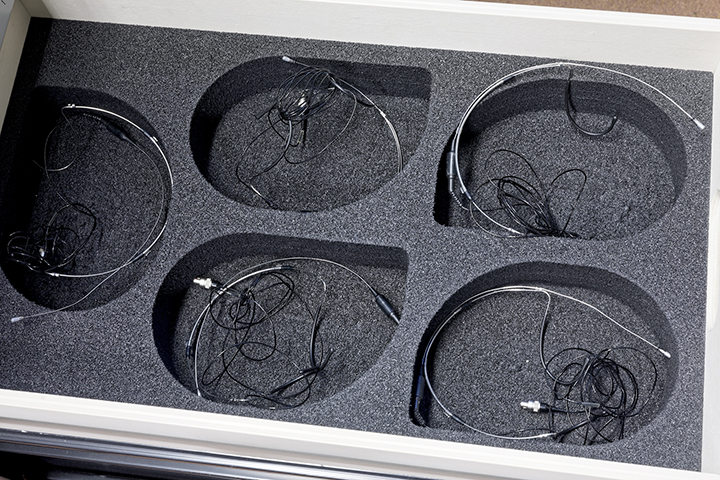 In addition to the bodypack transmitters, the Schauspielhaus also has eight SKM 6000 handheld transmitters. Six SKM 6000 are available in the Therese-Giehse-Halle. The handheld transmitters are all fitted with super-cardioid Neumann KK 205 condenser capsule heads. “In terms of the robustness of the handheld and bodypack transmitters, we have only had positive experiences so far,” Wolfram Schild confirmed. “The professional systems from the Sennheiser portfolio have always proven themselves in tough everyday use in the theatre, and the Digital 6000 systems are no exception in this respect. And if any problems do occur, we can turn to the Sennheiser service team in Barleben, who always help us quickly and competently.” Parameter display in the mixing console channel
​All Sennheiser EM 6000 receivers at the Munich Kammerspiele have a redundant connection via a primary and secondary port to the theatre’s existing Dante network. Additional operational reliability is provided by the fact that the port outputs are routed separately via different switches. According toWolfram Schild, the overall latency of the digital audio network remains within an acceptable range, in spite of complex FIR filtering of the loudspeaker system, and it is not noticeable during live performances.

The audio signals are mixed using POLARIS evolution systems from SALZBRENNER media GmbH. In addition to numerous other advantages, the modern mixing console concepts can use an add-on that enables selected parameters of the Sennheiser wireless systems (2000 series, 6000 series, 9000 series) to be displayed on their touchscreen, as would otherwise be possible on external monitors using the WSM (Wireless Systems Manager) software. “It’s incredibly useful to have information such as the remaining battery life or the AF and RF levels displayed directly on the corresponding mixing console channel,” said Wolfram Schild, extolling the practical virtues of the system. Due to these convenient control possibilities directly at the console, the WSM software is now used only occasionally in the theatre. ​

Using batteries with a clear conscience
​Wolfram Schild has this to say about the battery charging technology of the new Sennheiser Digital 6000 systems: “Battery technology has seen an incredible amount of new development in recent years. We have two rechargeable batteries for each of our handheld and bodypack transmitters, which means that one of the two batteries is always in the charger. We are using L 6000 charging stations with three different charging modules for small and large bodypack transmitters and for the handheld transmitters.” ​

Battery capacity, performance, reliability and environmental protection all go hand in hand: “This is the first time I’ve been able to use batteries in live performances with a clear conscience and without having to worry about them,”said Wolfram Schild, commenting on the innovative charging technology of the Sennheiser Digital 6000 series. “In the past, we mainly used non-rechargeables that were certainly not the ideal solution from an environmental perspective – we had to dispose of heaps of used batteries every month.” ​ More wireless channels in less spectrum
​The Sennheiser Digital 6000 systems at the Munich Kammerspiele were supplied by system providers, and the wireless equipment was installed by the theatre’s own audio department. The main contact partner on behalf of Sennheiser is Roland Bachmann (Account Manager Pro | AV): “We need to pay particular attention to ensuring reliable wireless transmission of audio signals, particularly in densely populated inner-city areas like the centre of Munich,” explained the specialist, who is well known in the industry for his expertise. “The Sennheiser Digital 6000 systems are perfectly equipped to meet the challenges of today and tomorrow. Their ground-breaking technology enables us to fit significantly more wireless channels into a smaller frequency spectrum than was possible in the past. A particular benefit is the possibility to arrange transmission frequencies in an equidistant grid with a minimum spacing of 400 kHz. And in special situations that require Link Density mode, it is even possible to accommodate up to 40 links with a spacing of 200 kHz in an 8-MHz-wide TV channel.” ​

Wireless transmission for recording-quality audio
​“Ever since we started using Sennheiser Digital 6000 systems, we haven’t had any problems with external interference at our performance venues,” said Wolfram Schild. “I find the new Sennheiser systems totally convincing, especially because their range is really good – the wireless connection is absolutely stable even over larger distances at our performance venues.” The Sennheiser Digital 6000 systems at the Munich Kammerspiele are operated in the frequency range A1 – A4 (470 – 558 MHz). Active AD 3700 broadband directional antennas are installed. ​

The audio benefits of digital wireless transmission include its lower noise compared to analogue transmission. The low-noise operation of the Sennheiser Digital 6000 systems at the Munich Kammerspiele was found to be highly impressive in audio recordings that were subsequently released as a CD. “The digital transmission sounds incredibly clean, even when a lot of channels are open,” Wolfram Schild confirmed. “In addition, as an audio producer you have an amazing amount of headroom available, which is very convenient in our everyday production work with different sound engineers because it lets you work with standardised gain settings. In the meantime, we only really need to change the gain parameters if, in exceptional cases, we have to transmit a line signal instead of a mic level. In my opinion, digital Sennheiser wireless technology is far superior to analogue transmission concepts in practically every respect!”