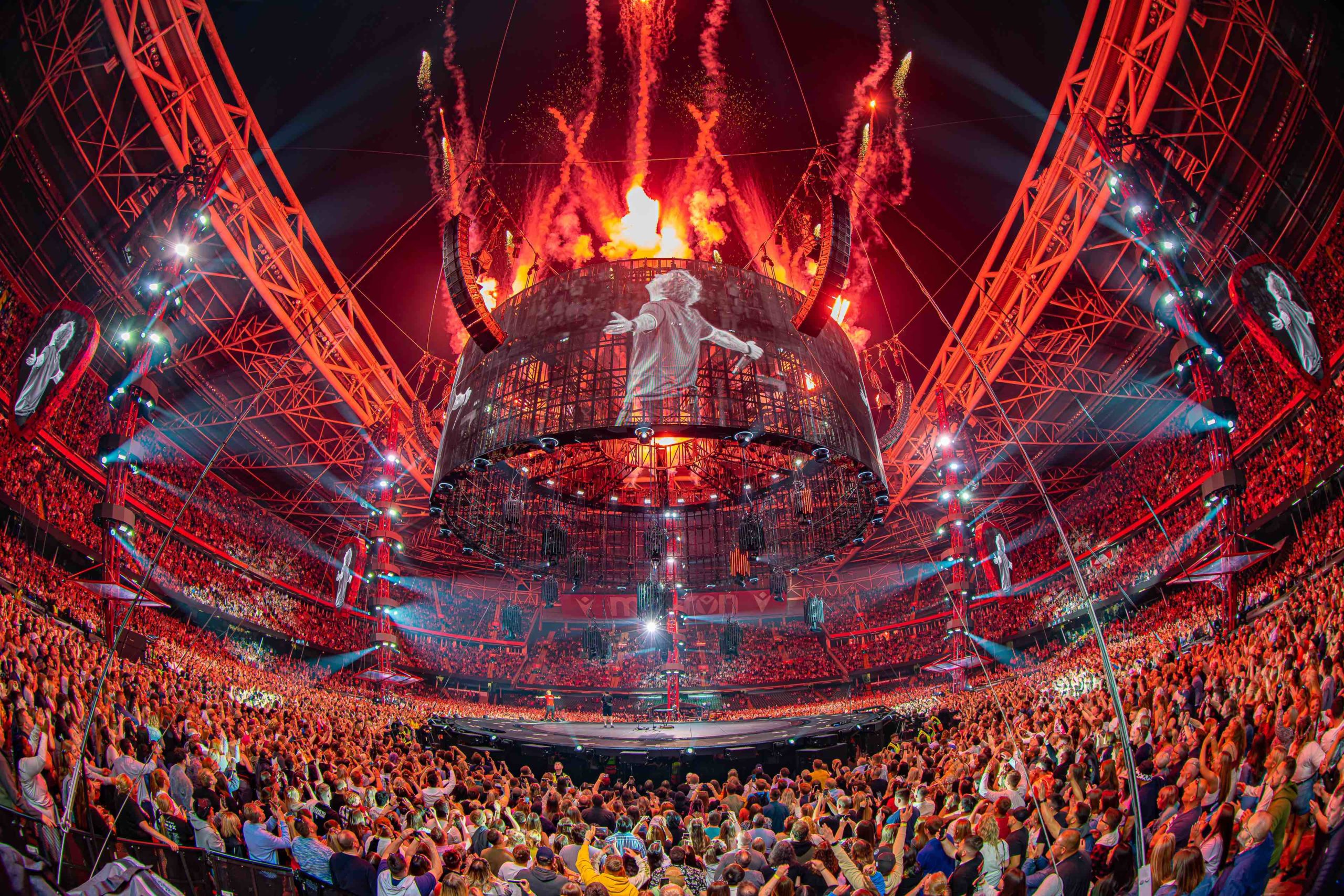 The show design is a huge, in-the-round, stadium setup with an unprecedented open design, with no roof, a large circular video screen over the revolving stage and 6 mammoth masts held in place by a cable net system. This major feat of production design was the brain-child of Cunniffe and engineered by Jeremy Lloyd of Wonderworks and Rasti Bartek of Cundall.

“This kind of set up has never been toured before on such a scale,” says Cunniffe. “With such an open design it is important not to create a barrier between the artist and audience with the show infrastructure. I therefore wanted to maintain the clean lines, with no visible crew on stage, and most importantly, no ugly waterproofing in view, so IP65 rating was imperative for all the fixtures we chose.”

Cunniffe’s fixture requirements were also very precise and put out to tender with plenty of lead time. “My wish list was clear and detailed,” he says. “I wanted a long throw LED unit that was IP rated, with a specific zoom, beam quality and flat field, and really crisp and subtle colours with full range of CTO, CTB, minus green, etc.”

It was at this point, in 2019, that Glyn O’Donoghue at Ambersphere Solutions, Ayrton’s exclusive distributor for the UK, took Cunniffe to meet Chris Ferrante, CEO at Ayrton, and the team at Ayrton HQ. “Ayrton jumped at the challenge and designed a product based on Huracán LT but IP-rated and with a great long throw capability,” says Cunniffe. “That product became Domino LT which answered all my wishes. It has been a fantastic success on the show.” 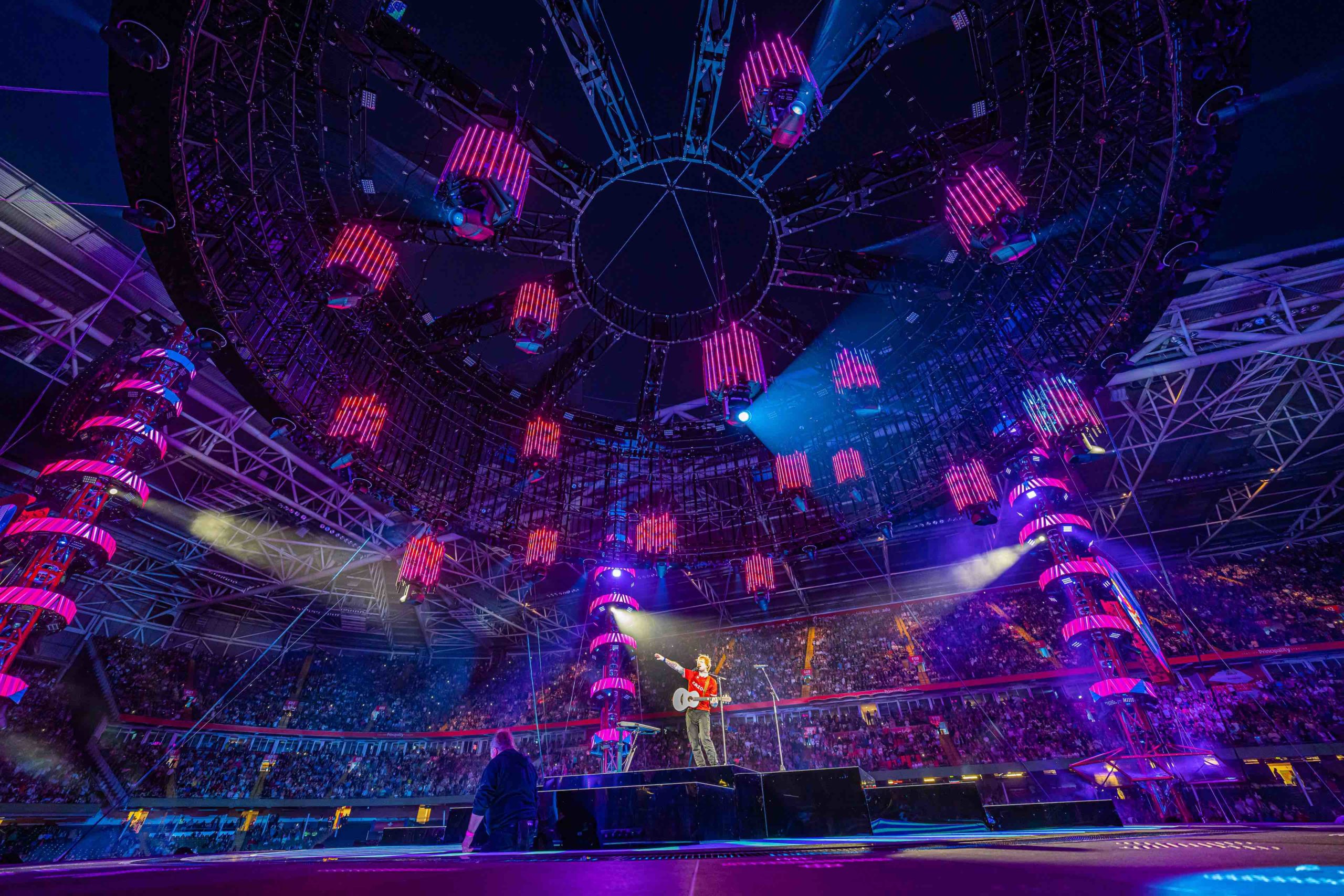 Cunniffe has 138 Domino LT fixtures rigged on the 6 masts where they are used as the main source of illumination. Six of them are used as Sheeran’s followspots: “The Ayrton products work really well with the FollowMe system so there are no visible crew members on or over the stage, which helps maintain the clean lines,” says Cunniffe. “It all works in quite a surreal fashion!” The remainder of the Domino LT units provide the creative lighting background: “With no back wall or back trusses in-the-round, the masts become the key and back lighting and side fill, plus all the creative elements – it’s a complete 360° treat!

“The show is designed to appear different from every angle it is viewed from, but brilliant from any angle. I’m really pleased with the way it turned out. And that clean design means there are no seat losses at all – the promoters are over the moon!

“Domino LT is a complete game changer from my point of view as a designer,” confirms Cunniffe. “IP rated, (so no waterproofing to disrupt the aesthetics), a very bright LED engine, great graphics, lovely clean, flat optics and excellent rendering and colour quality. I can get really great skin tones out of it – it’s a really great creative tool, not just a powerful light. It’s basically given me a rig of 140 followspots! And it works very well with the overall, largely video-driven design. I’m incredibly pleased with it”

Cunniffe chose 48 Perseo Profile fixtures for over stage positions. “I wanted a smaller unit overhead, something a little more subtle that I could hide and build into the chandeliers, and around the circumference of the halo (the central circular video wall). They worked really well in conjunction with the Domino.” 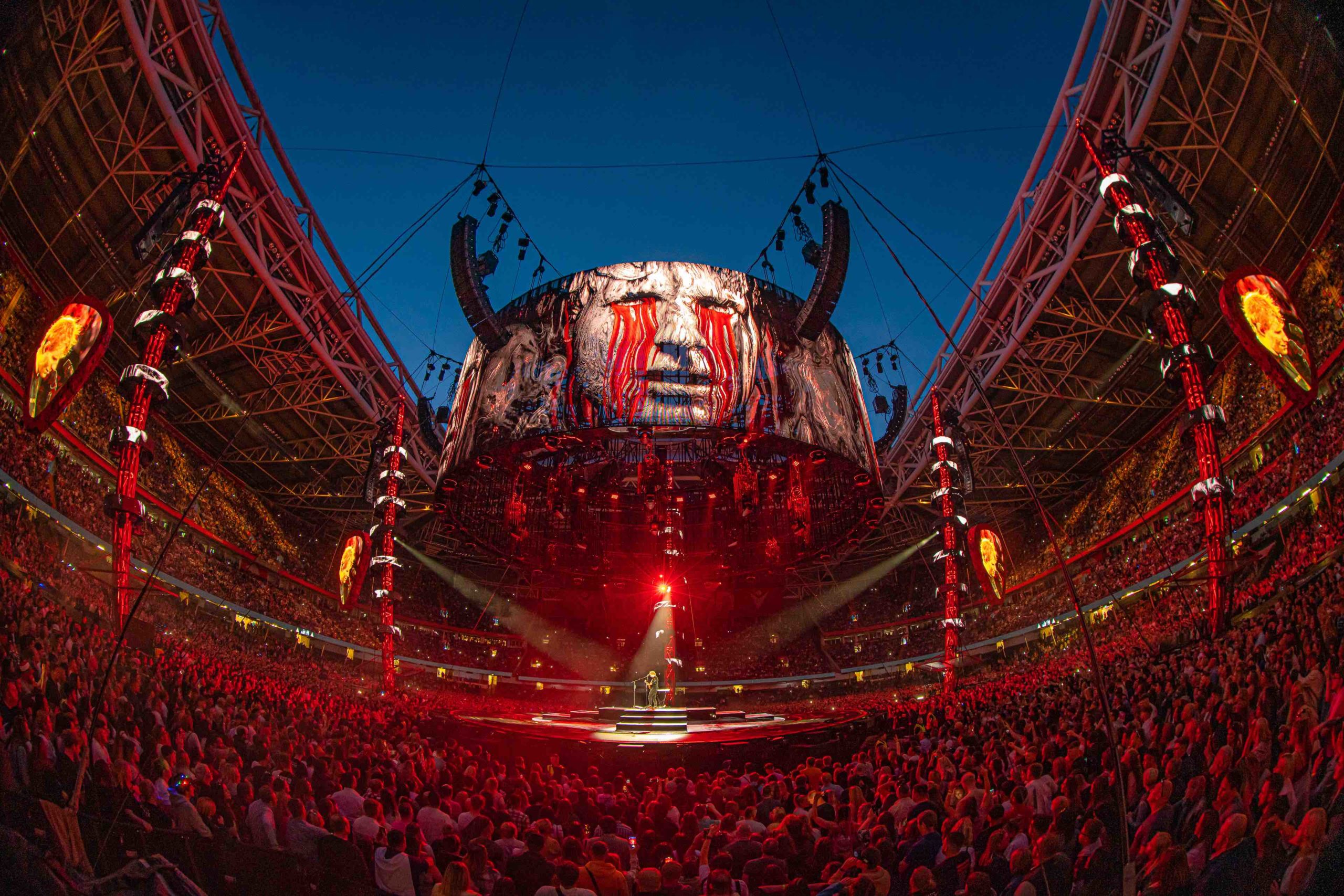 To complete the trio of Ayrton IP65 fixture types, Cunniffe embedded 22 of the new Ayrton Cobra laser-sourced fixtures around the outer perimeter of the stage. “We tend to use these in the latter part of the show after twilight following the video-heavy first half of the show when the atmosphere ramps up!

“We gave ourselves plenty of time to programme because we have a very energetic artist on stage, but I’m very impressed with how well the Perseo, Domino and Cobra complement each other.

“The Cobra was the icing on the cake! I knew nothing about this fixture but Chris showed it to me when I went to Ayrton HQ to test the Domino. We tried it outside the warehouse and I couldn’t believe how far its throw was. I knew it would look great around the edge of the stage. The product was still on the R&D bench at that stage but Ayrton pulled out all the stops and got me the number of units I needed in time. I don’t think I’ve ever met a lighting company that literally delivers everything it says it would.

“Our brief for these three fixtures was exactly the same to all the lighting manufacturers invited to tender, but Ayrton was the only one who delivered everything I asked for in each product. It’s the first time I have used Ayrton and I am completely sold on the company’s work ethic. They were really happy to collaborate. I have a working relationship with them now that I didn’t have four years ago, and they will be my first point of call for future shows.” 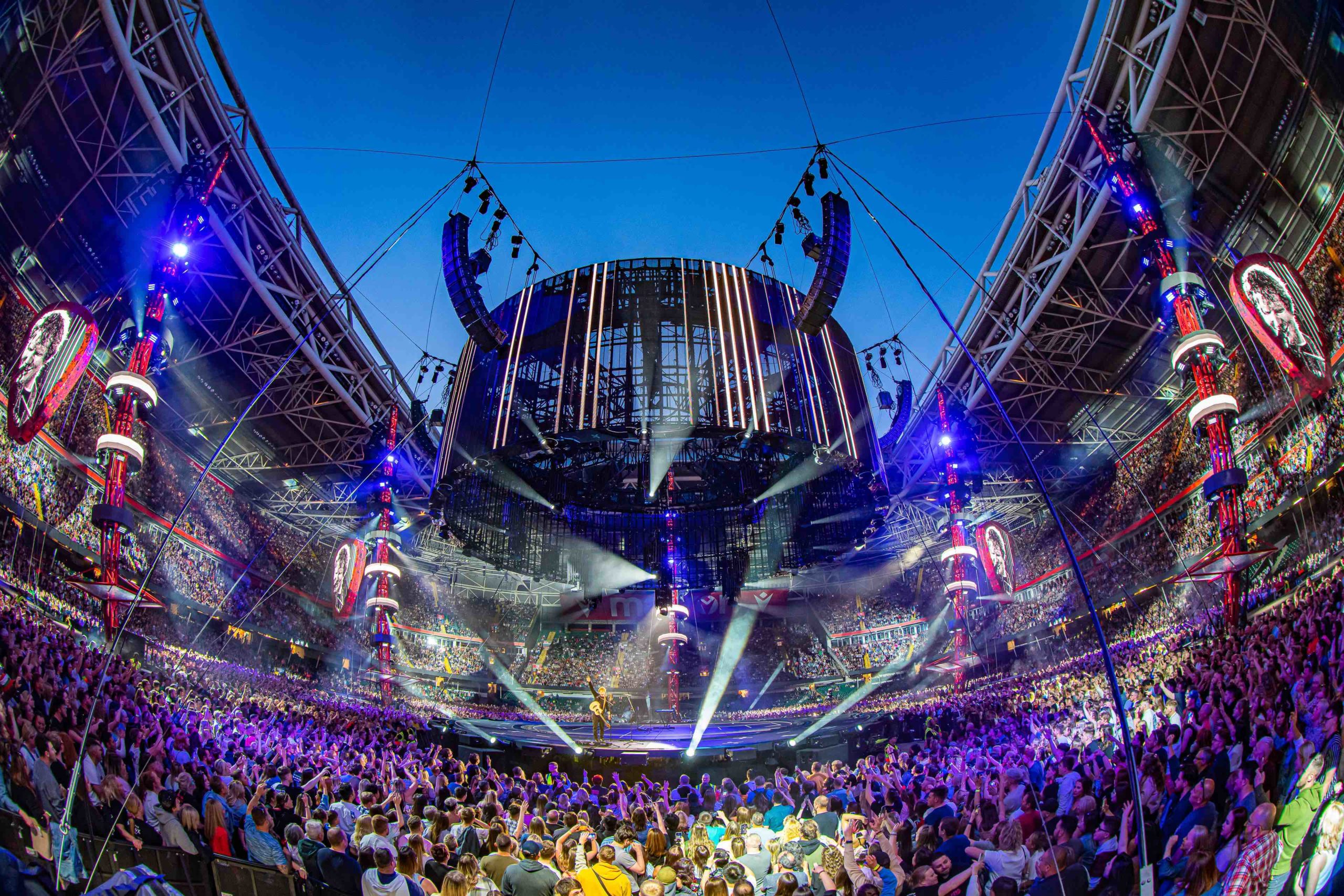 All the Ayrton fixtures were supplied for the tour by LCR with Ryan Hopkins and Mike Oates as account handlers, working in close conjunction with Glyn O’Donoghue at Ambersphere Solutions. “It is always great working with Mark, his creativity knows no bounds,” says Hopkins. “He knows exactly what he wants to achieve out of a fixture, and it has been a pleasure working alongside Ayrton and Ambersphere to realise this for him. Having a support network in place like Ambersphere and Ayrton on a show of this scale is equally as vital as the amazing products they produce and why we have, and will continue, to work with them for many years to come.

“Once we had nailed down the fixture choices for the Tour, we actually decided to increase our order of them to make the same products available in large quantities for other shows. We have ended up with 3 great units which I’m happy to say are proving very popular!”

Ed Sheeran’s much-anticipated Mathematics tour is selling out around the world and will visit mainland Europe this summer and Australasia at the start of 2023. Regardless of weather, these lights are destined to travel! 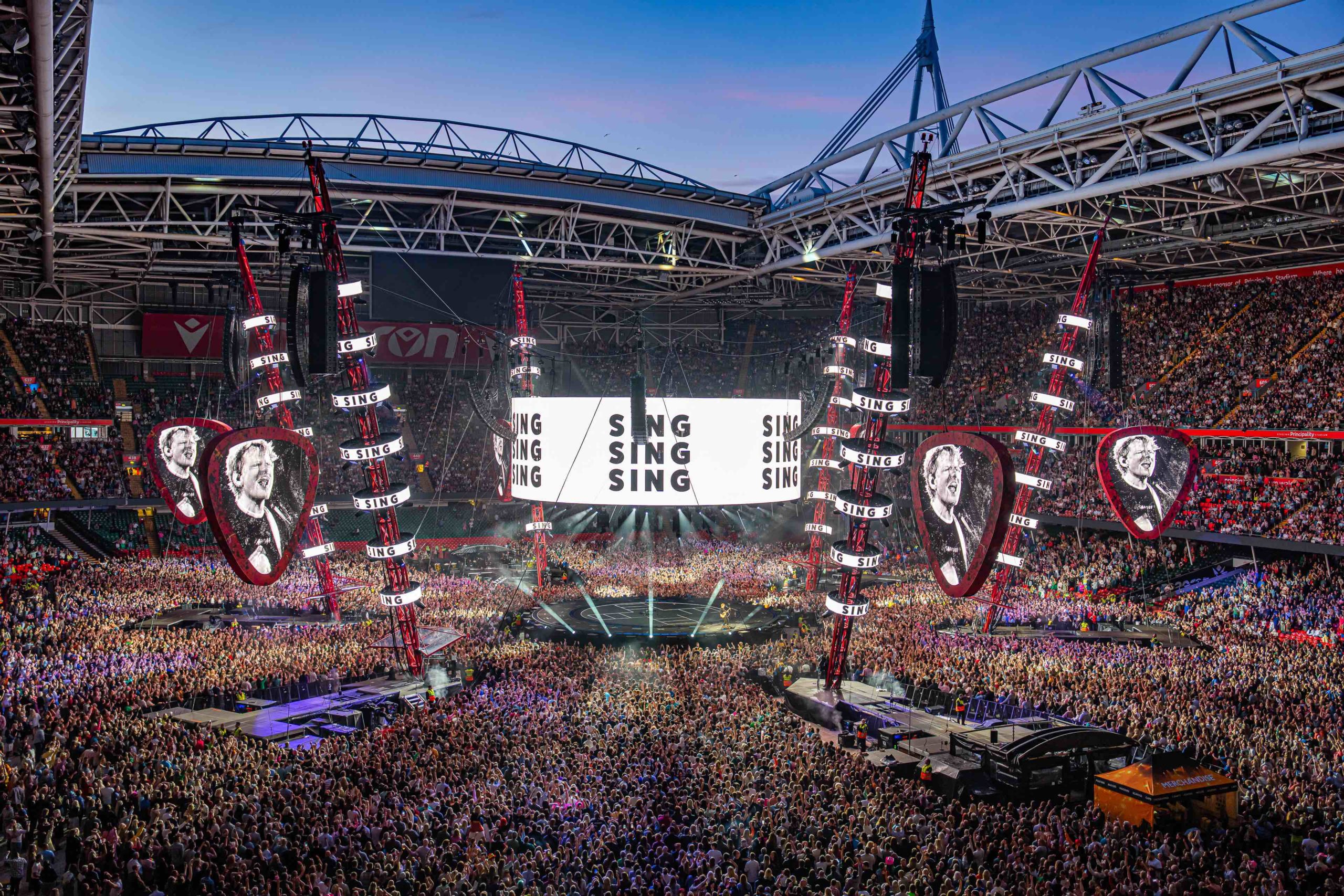