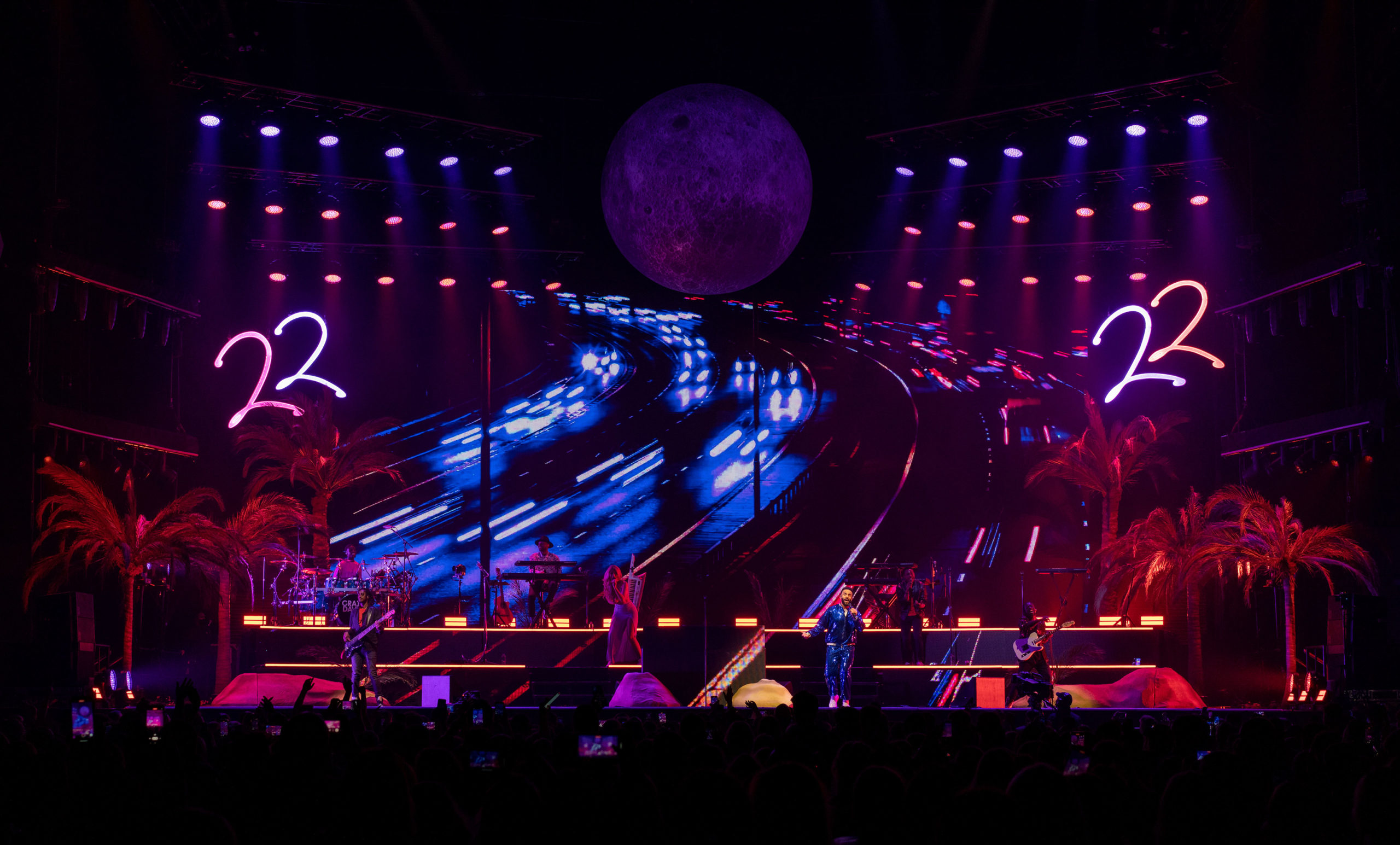 Craig David himself was very much involved in the show creation, explained Daniel. He shared his initial ideas with Rob Sinclair and Daniel back in 2019, who refined these into workable touring options from which a concept was chosen and developed.

Plans were then halted due to the pandemic and in this time the artist produced a wealth of new music!

During a production meeting in February of this year to get the tour re-started, “Craig indicated that he wanted to involve scenic elements in the show and loved the idea of having some real foliage on stage,” explained Daniel.

Taking the new 22 album artwork as inspiration, he and the team reimagined and reworked the stage design to capture the essence of all these fresh aspects. In the album, Craig is a journeyman, travelling under the moon and stars through different lands, his previous homes in Miami to his present one in London. 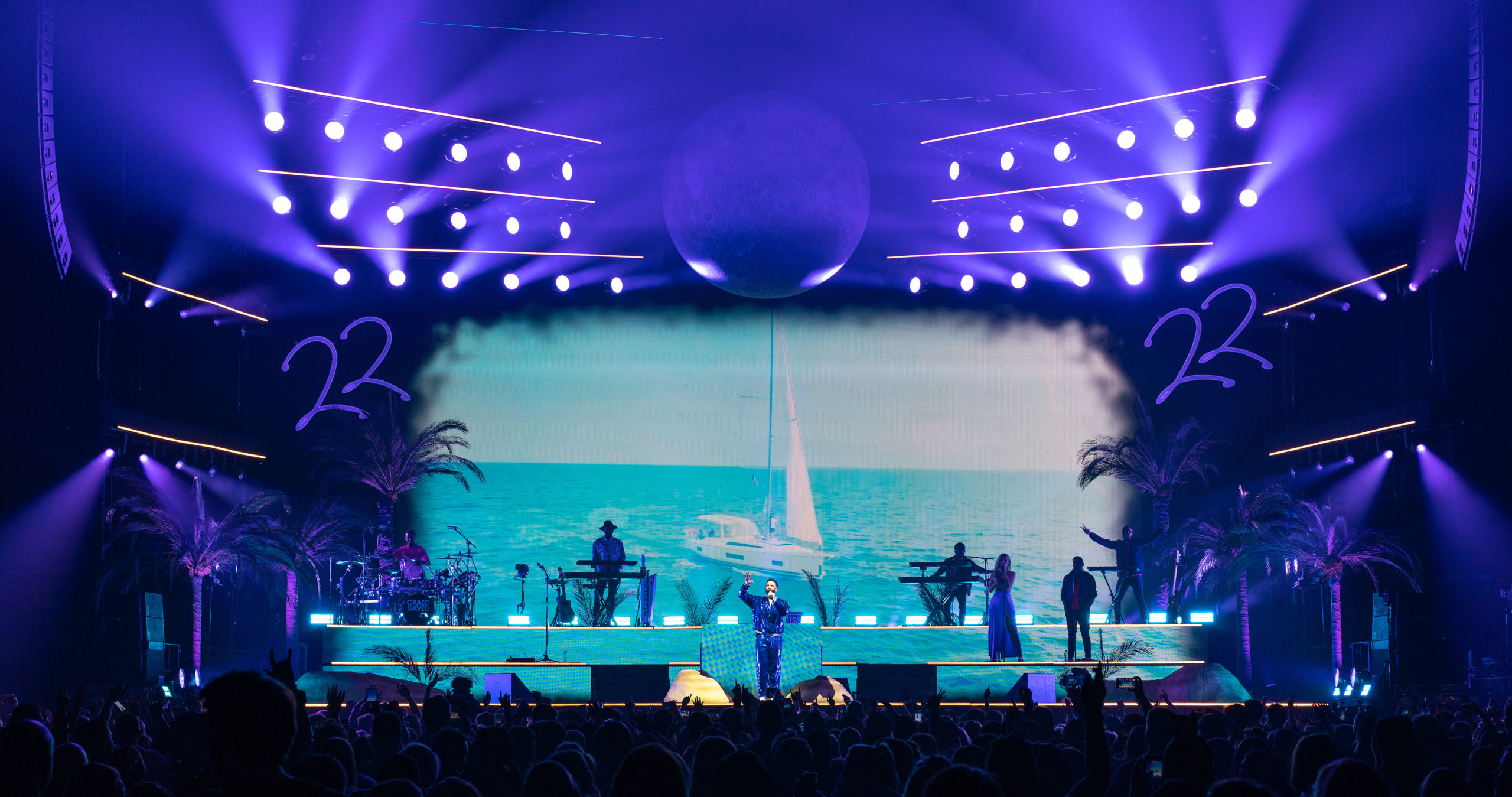 With this in mind, a ‘real’ moon on a Kinesys hoist system was added, together with the cool LED ‘neon’ 22 signs plus some real palm trees and other foliage.

A strong narrative arc underpinned the whole show which started at night-time with David under a moonlit sky, complete with the 4-metre diameter scenic moon and twinkling stars. The timeline moved through sunrise, daytime, and dusk and back to the night, moving through three distinctive sections.

The set kicked off with David and the band onstage, morphing into a special TS5 DJ set – a project started in 2012 when hosting parties for friends in his Miami apartment – for which two centre stage screens flew in to cover the backline. The band returned for the final songs of the set.

The final song “Seven Days” concluded in front of another moon nightscape with twinkling stars and flickering neon ‘22’ signs.

The various snapshots in time were all accompanied by scenic and other content on a large upstage LED screen that helped depict different environments, including highways, the neon buzz and hustle of Miami, London and other city skylines, waterfronts, nightscapes, and sunrise etc.

Fundamental to creating the right overall show setting were some real palm trees and other foliage, plus some scenic sand dunes made by Hangman were included in the set elements which looked spectacular. Daniel also commissioned the video content from Really Creative Media (RCM), and all this scenic and digital intricacy and detail needed very careful lighting.

He chose BMFL Spots and Blades for the hard-edged fixtures – adding 35 x BMFL Spots and 16 x BMFL Blades to the plot – because he needed a powerful, multifunctional, and reliable fixture. “They were in action constantly throughout the show and are a solid workhorse,” he commented. Two wing trusses each side of stage were each rigged with five BMFL Spots, and these 20 x BMFLs were primary lightsources for the TS5 section, pumping vibrance, energy, infectious dance beats and the atmos of heady summer nights out into the arena, also helping to expand the area around David’s DJ booth and ensuring there were no dark spots.

They were joined by a row of 15 x BMFL Spots on the floor at the back shooting powerful beams forward, all of them creating massive high impact looks to invigorate the stage and connect with the multi-generational audiences who enthusiastically rocked up, proving that Craig David is still every bit the master showman and entertainer after 20 years at the top of his game!

Daniel remarks that these upstage BMFLs worked brilliantly for the transition looks between show sections when pointing forward with spinning gobos creating light curtain effects. Together, these 35 fixtures were an essential part of the show lighting aesthetic.

The BMFLs on the wing trusses also provided back and side lighting on the palm trees and even at the lower levels, they emphasised their three dimensionality and helped them pop out, adding plenty of depth to the performance space.

Adding in gobos to the BMFLs also helped light and through-light the palms very effectively. The 16 x BMFL Blades were all on the front truss as “they are a great key and front light and we needed intensity (of light) from these positions.” Daniel notes the usefulness of the shutters in accurately highlighting the palm trees and other foliage, and he thinks they make excellent follow spots.

Four of the front BMFL Blades were on the four RoboSpot systems, two dedicated to following Craig David closely, with the other two on standby for solos and other specials including band positions and the palm trees.

Originally, they envisioned two RoboSpot systems, but soon discovered more were necessary to cover the band who are extremely active, constantly running around and covering a lot of the stage area, so two more RoboSpots, cameras and BaseStations were added. The operators were all located backstage, and Daniel describes the system as “very convenient and stable.”

In addition to these luminaires, also on the rig were quantities of wash moving lights, pixel fixtures and strobes.

The main challenges for lighting the show were following the storyline and keeping each different part interesting and exciting, all the time establishing how to push the energy of the lighting without it becoming overwhelming.

Vitals included ensuring that the colours followed the storyline, but also keeping it fun with plenty of surprises. Lighting the greenery was also important to making it a seamless part of the setting, and other attention to detail like adding a palm tree vignette to the main screen for certain moments kept the treatment smooth and slick. 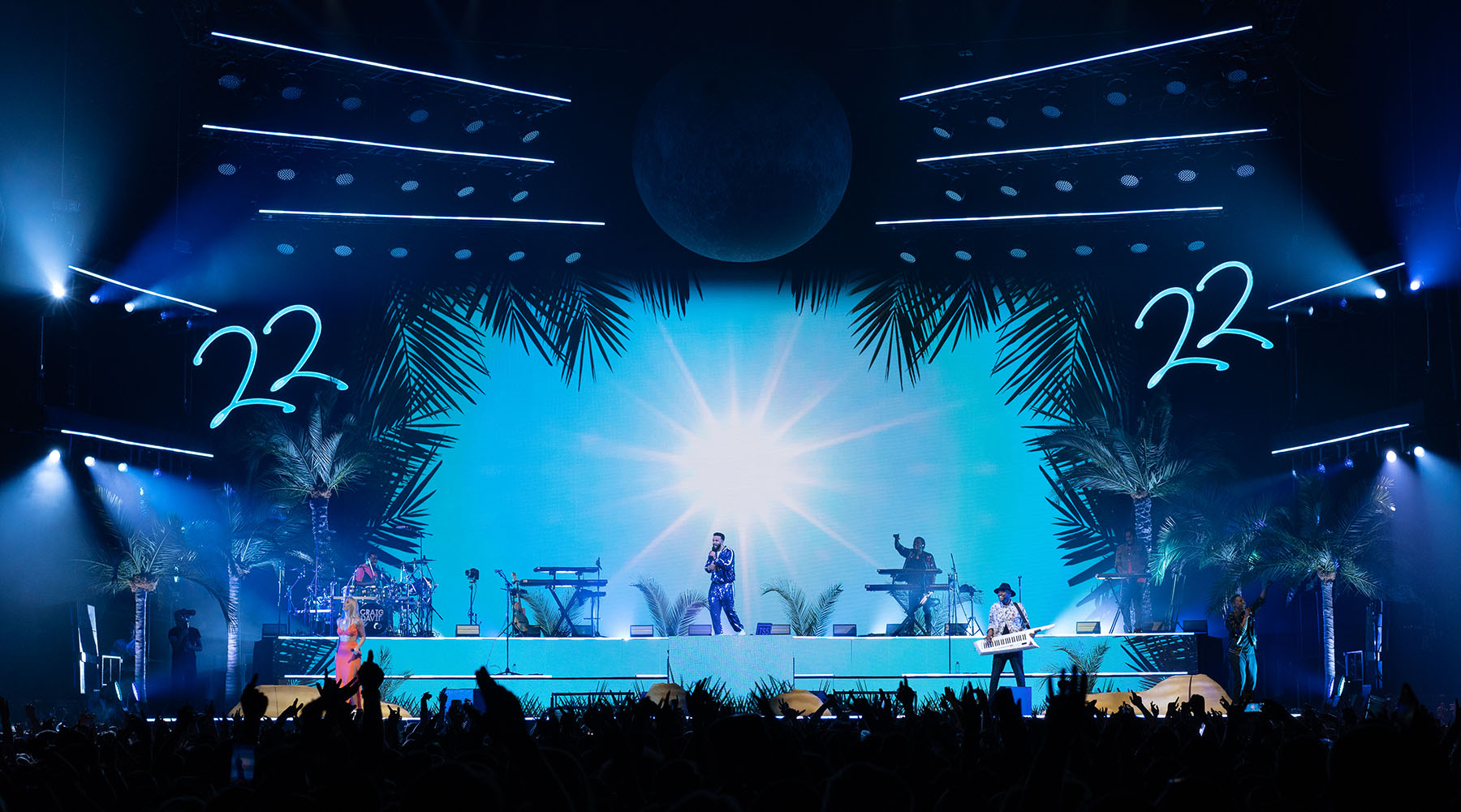 Lighting was programmed onto a grandMA2 console by Daniel over 10 days starting in his own studio in London ahead of production rehearsals in Nottingham Arena, two days before the first show in the same venue.

It was a galvanising show for Matt Arthur to run, with some of it tightly cued and other parts like the TS5 section where lighting was more improvised, so the design and the programming had to be flexible enough to deal with this. All the video playback content cues were also triggered from the GM2 via a disguise media server.

IMAG camera feeds were sent to the left-and-right side screens, directed by Jamie Cowlin, and keeping everything co-ordinated and running smoothly on the road was production manager Joel Stanley.

Daniel loved the collaborative nature of creating this design – from the artist to Rob Sinclair’s input plus that of other technical departments on the tour – as well as being able to craft the whole visual design covering all disciplines to present a coherent bigger picture.

The Hold That Thought 22 tour was a huge success and in terms of production, also a moment in time.