The RCF Arena is an Italian success story, from an organizational point of view, spectacular and is also acoustically sound. The largest outdoor music venue in Europe was born in the airport area, formerly known as Campovolo, and hosts a modular capacity of 10,000 to 103,000 people. The sound is the pride of the venue. RCF Arena is equipped with a total of 410 high-end loudspeakers and approximately 2 MegaWatts of sound power. 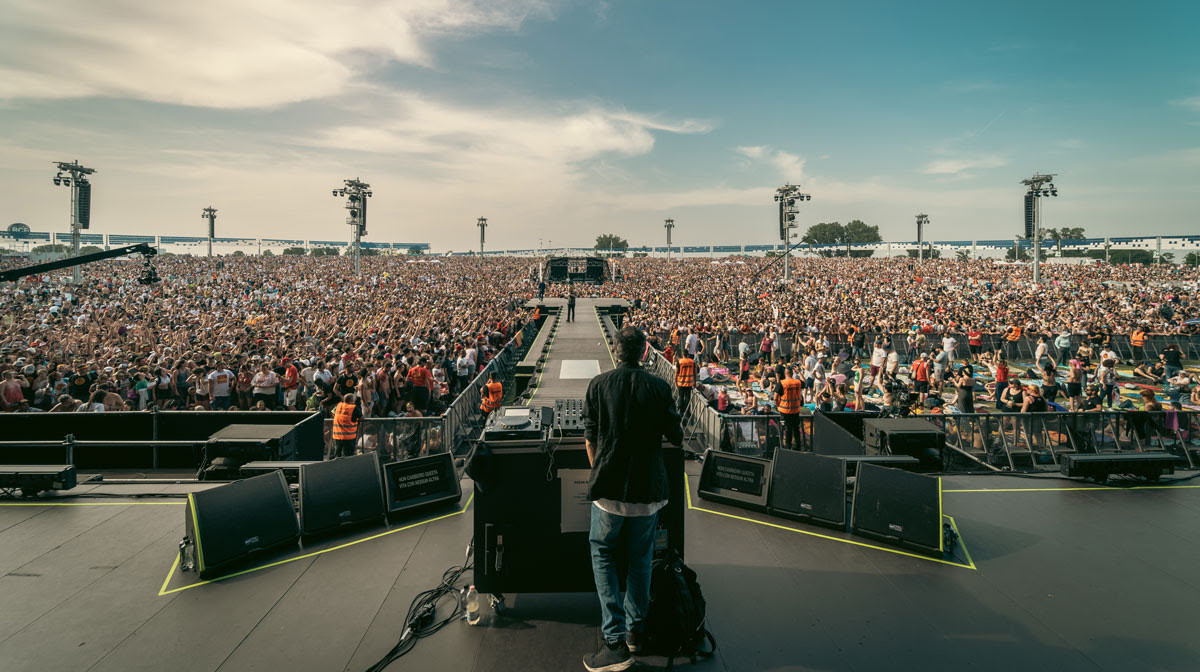 The inauguration of the Arena took place with a concert-event that celebrated Ligabue’s 30-year career, who performed historic concerts here. In 2015, the Italian rock artist set a European record with 150 thousand paying admissions for a single artist, already amplified by an RCF audio system. The space, covered mainly by grass, includes all the services and amenities for event production, including a proper lawn slope of 5% and a “guitar pick” configuration divided into 5 main areas to ensure optimal visibility and acoustics.

The stage is located in the lowest part of the Arena in a central position with a viewing angle of 110 ° – an optimal value for the audience to fully enjoy any event. The venue is centrally located, with airports nearby, a high-speed train station – connecting Milan, Bologna, Florence, Rome, and Naples, and has a large parking area. Considering capacity, quality of the experience, communication routes, and accommodation capacity, RCF Arena is indeed, the largest music venue across the European continent.

“RCF was born in 1949 in Reggio Emilia. From our Emilian town we have brought the excellence of Italian sound to an international level and today we are among the major players in the market.”, declares Arturo Vicari, CEO of RCF Group. “Giving our name to RCF Arena is a source of pride for us, but also a mission, and a commitment. We have a strong bond with this region and we intend to take care of it in the best possible way. With the completion of this wonderful project, we bring innovation, technology, and our sound to our home in Reggio Emilia. It is a prestigious signature that does not hide RCF’s devotion in the continuous search for sound quality in this new Music Valley.”

“RCF Arena is equipped with the most modern technologies for the best concert performance,” comments Emanuele Morlini, RCF System Designer assisted by Lucio Boiardi Serri (System Engineer, RCF) and Fabio Capello (System Assistant, RCF). “The RCF TT+ audio system, part of the flagship line of large RCF systems for live events, consists of a main system at the sides of the stage, with 4 line arrays covering the front and a further 10 systems distributed on permanent metal towers (delay towers), which can also be used as supports for video and lighting equipment. The sound system is designed for the best sound coverage to each seat, no matter the distance from the stage. At the same time, the orientation of the system is optimized to ensure the lowest noise impact towards the inhabited areas of the city,”.

For this momentous occasion, RCF deployed a new TT+ line array called GTX, a brand new audio system with innovative features, distributed over 4 main arrays on the sides of the stage. Reinforcement for low frequencies comprises two arrays of suspended double 15″ modules and a sub-frequency reinforcement system on the ground consisting of TTS 56-A double 21″ subwoofers. Along with the massive GTX, additional 10 line arrays consisting of TTL 55-A modules are installed on towers. The GTX 12 line array and the GTX 15S low-range extension are part of the RCF line of TT + ultra-high performance audio systems and have been designed for the debut of RCF Arena.

GTX 12 features two 12″ woofers in an axially symmetrical three-way system with a 4PATH waveguide, while the GTX 15S hanging module houses two 15″ woofers in bass-reflex loading. The management of all parameters takes place through a new powerful high-bitrate floating-point DSP engine, the result of substantial research work by the RCF development team.

“We have been using RCF TT+ systems with Ligabue for many years, overcoming many acoustic challenges,” comments Alberto Butturini, sound engineer for Ligabue. “It was a pleasure to mix with the GTX. It’s an audio system that will be heard for many years and will take RCF one step further in the concert sound industry. I was impressed with the quality of the high range and mid-bass. A superlinear and never-tiring audio system with excellent efficiency across the entire sound spectrum. “

The complete and definitive system will be part of a new range of loudspeakers that will be presented in 2023 and fully compatible with the RCF RDNet digital platform for remote control and monitoring. To date, GTX 12 is the system with the highest power density, while simultaneously becoming the line array module with the best dynamic range and lowest distortion ever built by the Italian manufacturer. In addition to using high-end RCF Precision transducers made ad hoc, the system integrates and improves many of the hardware and software solutions introduced by RCF in recent years. GTX aims to provide one of the most advanced audio systems for events providing stellar RCF sound, flexibility, and performance.

“RCF audio systems have amplified the music of national and international artists in every corner of the globe.” continues Vicari. “RCF sound is the intelligence and reliability of a company made up of passionate people. We just turned 70, and we still have a great desire to play and perform. Welcome to the RCF Arena!”