As a longtime partner of the EBU (European Broadcasting Union), Riedel Communications was once again a key player in the production of the Eurovision Song Contest, the world’s largest live music television production. For the Wuppertal/Germany-based company, such complex events are nothing new: for more than 35 years, in fact, they have been ensuring the implementation of the Olympic Games, World Championships, festivals and countless other major international events with their comprehensive technical solutions in the areas of communication, signal transmission and many others.

Riedel’s services to ESC include accreditation and access control solutions, communications (radio and intercom), fiber optic backbone, signal distribution and commentary technology. A team of 34 on-site specialists takes care of the installation, commissioning, operation and service of all Riedel systems and, last but not least, the “all-round service” appreciated by customers and partners. 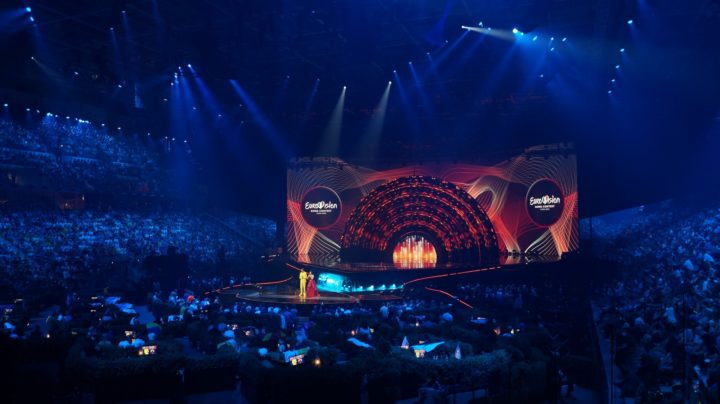 “We are the first to arrive and the last to leave” says Yungmin Lee, Riedel’s project manager for the ESC.

Riedel, as the front-end of the EBU’s accreditation software, ensures the proper procedure for controlled access to the venue and individual areas within and adjacent to it. Riedel not only provides the hardware and software for the accreditation center (computer, printer, server), but also more than 12,000 accreditation cards, several thousand special stickers, such as for the opening ceremony, or hundreds of wristbands, such as for hospitality areas.

The accreditation cards are equipped with an RFID chip that is individually coded on site and read by Riedel’s access control systems at the many entrances (e.g., for workers, VIPs, press, delegations). 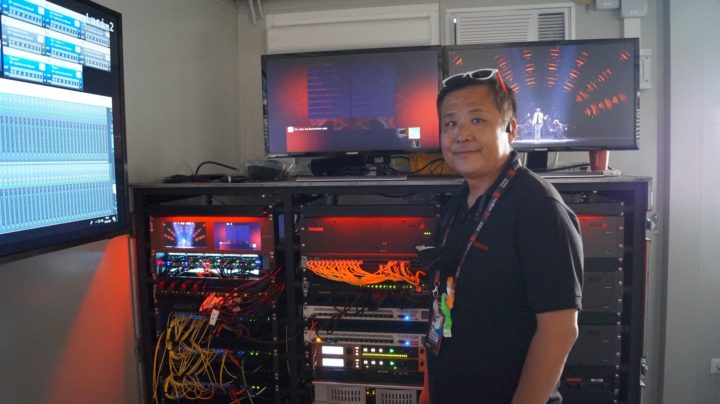 Real-time communication related to the show is via an analog radio system with 16 simplex and 16 half-duplex channels, which are partly integrated into Riedel’s intercom system and thus enable inter-technology communication.

For other areas of production, e.g., volunteers, security services, and other departments, a digital radio network is provided because the minimal transmission delay of only 120 ms of the TETRA radio is not a problem for their work and at the same time they can benefit from the many advantages of digital technology (including audio quality and frequency efficiency).

Frequency coordination and management were carried out in close cooperation with RAI Way and the Italian Ministry of Telecommunications.

Yungmin Lee: “The ministry was always on site and controlled everything. Also, with the help of spectrum analyzers and special software, we constantly kept an eye on the spectrum we were using to make sure that no wireless technology used by third parties (including more than 30 radio microphones) interfered with and/or jeopardized the frequencies we were using and thus the smooth communication of the production.” 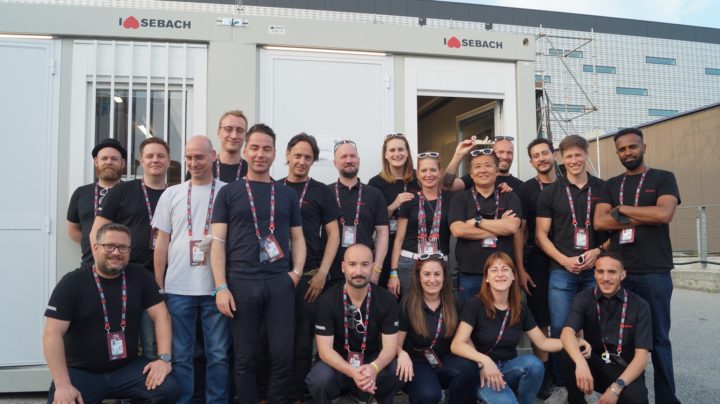 In addition to the forementioned radio technology, Riedel Artist intercom system was used for communication, as well as about 150 intercom stations (RSP, RCP, DCP and CCP models for commentators) and about 65 full-duplex intercom beltpacks “Bolero”.

Together with the 2 NEP OB vans, which already had Riedel technology permanently installed on board and could be easily integrated into the overall Riedel network through fiber optics, the number of intercom devices used increased by more than 100 units (microphone units and beltpacks).

Riedel’s ESC system was monitored and controlled from a single container located in the TV complex. This is where the heart of the Riedel system was located, where all the above-mentioned components were joined and connected to form a complete system. In addition to the aforementioned radio infrastructure, the integration of more than 20 MediorNet and IP racks located at pivotal points in the facility was also planned. These play a key role in the signal distribution sub-project. All production-relevant data, intercommunication, video and audio signals are distributed, routed and monitored through Riedel’s MediorNet and IP racks, which are integrated into the overall system.

The entire commentary system was also managed and monitored from here. This CCR (Commentary Control Room) was the central interface between the Riedel technology used by the commentators in the hall and the MCR (Main Control Rooms) of the participating TV stations. For this purpose, a SIP service was installed enabling the commentators not only to commentate on the live event on their home televisions, but also coordinate with the home stations through a separate coordination connection.

To ensure the level of reliability required for a live television production, Riedel systems are designed and supplied redundantly in both hardware and software. 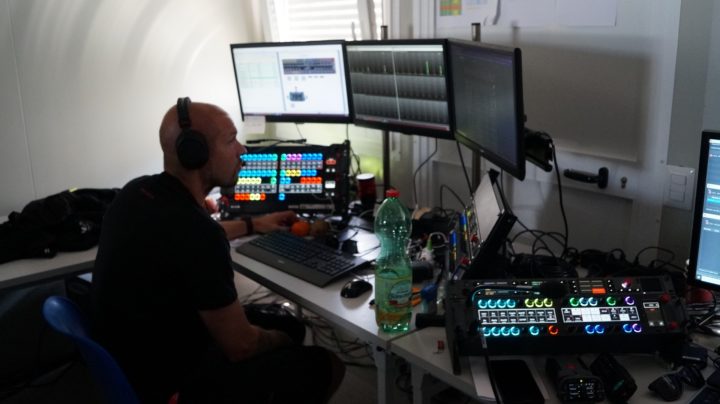 Another container in the TV complex served Riedel as both a production office and RDR (Radio Distribution Room), from which all mobile terminals (radio, Bolero) were serviced, batteries replaced, and devices reprogrammed as needed.

Riedel’s presence at the site is now generally known as “Riedel World” and, in addition to the functional areas already mentioned, serves as a central aggregator, coordination and sharing point for almost all the trades involved in production. Over coffee and treats, information can be exchanged and problems can be solved quickly and easily, because, according to Thurid Wagenknecht, Programme Manager Global Events at Riedel: “at the end of the day, ESC production is above all one thing: a huge team effort.”

As Program Manager Global Events, Thurid Wagenknecht is the link between the logistical aspects and the technical, operational, and commercial areas of the event and thus responsible for the overall success of the Riedel project. “Programs and project management have to work 100 percent side by side for events of this magnitude. This requires not only many years of experience, but also permanent exchange and great mutual trust. We are a perfectly coordinated team, so there were no critical situations or noteworthy problems in this edition of the ESC.” 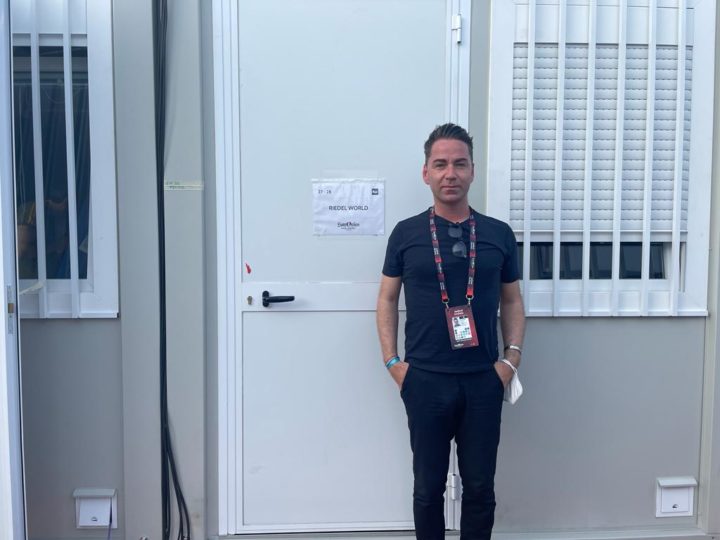 Giuseppe Angilello, Riedel’s sales director for Italy, is part of Riedel’s direct commitment to building broad brand reach in its target market. “Being at the forefront of a global event of this magnitude is a clear demonstration of the reliability and versatility of our solutions. All this was enhanced by the human effort of our team, which worked on this complex production for a year,” comments Angilello.

“The most important thing was to see how the entire technological infrastructure of everyone involved – host broadcaster and production – combined perfectly in a clear and transparent way. Together with human know-how and team spirit, this made an ambitious project made in Italy a success,” Angilello concludes.