Copenhagen’s Bellevue Theatre asked lighting designer Mark P Jones to create a practical and versatile lighting scheme to facilitate their recent touring version of “A Column of Fire”, a musical production based on Ken Follet’s gripping work encapsulating politics, passion, religious divisions and other 16th-century melodrama of the moment. It was initially staged at the theatre in 2019, directed by Mads M Nielsen with set designed by Benjamin la Cour and lit by Mikael Sylvest. 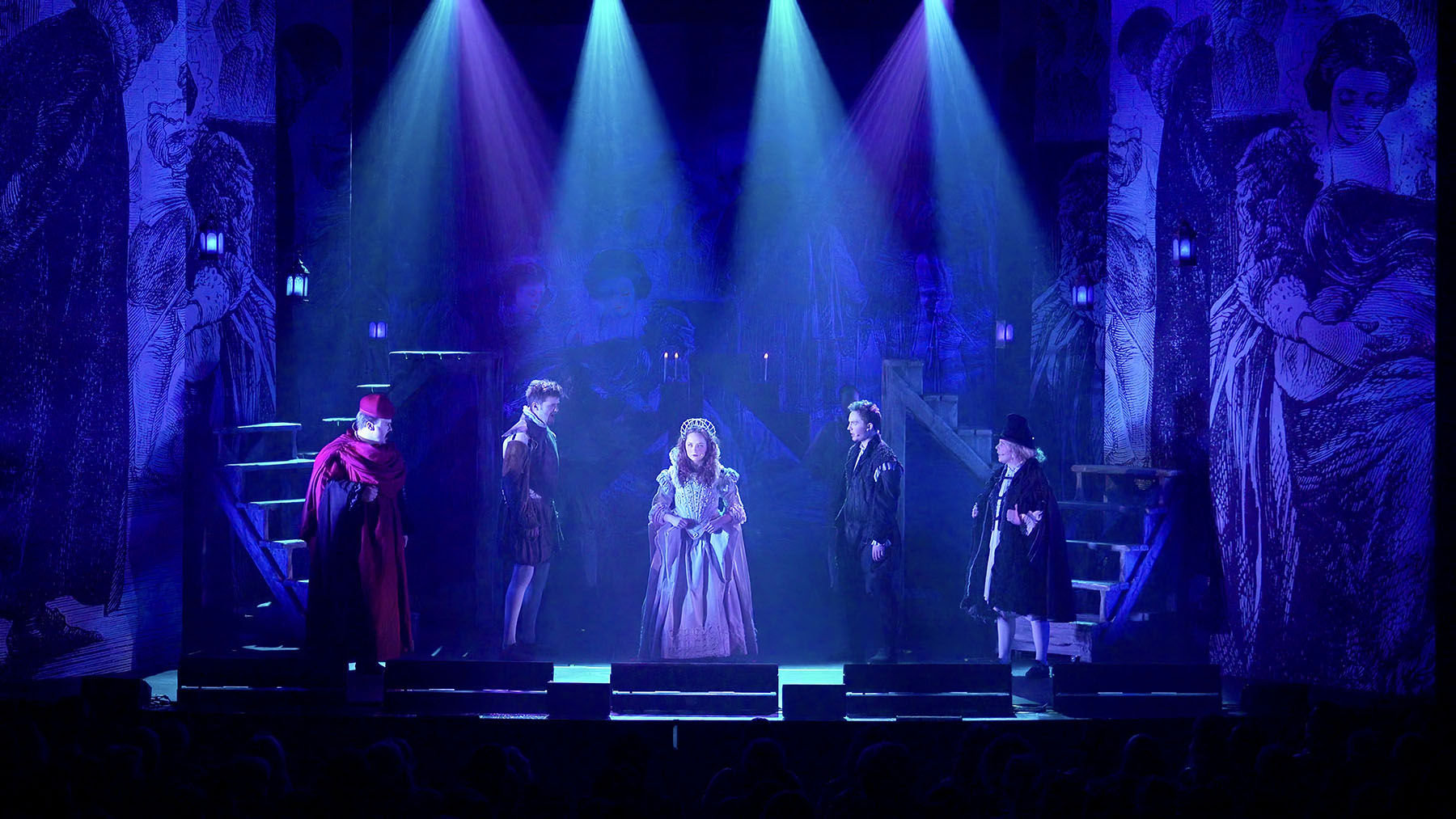 The show was a huge success, and so after Covid had effectively shut the industry down for two years, the theatre was keen to get it on the road once things started to properly re-open again.

Mark’s solution involved several Robe moving lights – ESPRITEs, LEDBeam 350s, Tetra2s and DL4S Profiles – all supplied by Copenhagen rental specialist The Live Company. They also designed and fabricated a set of eight custom portable (wheeled) stacking trussing towers especially for the tour, and four of these were deployed down each side of the stage.

The challenge was to work with the existing six set and stair pieces plus some side flats which were individually crafted and ranging from 80 cm to 2 metres in height. Elements of the stair pieces could be manually moved – by actors using touch buttons – and they increased / decreased in height throughout, so the action and the lighting cues had to be very tightly choreographed across the show’s 50+ scenes.

As soon as Mark hit on the answer for lighting that would work at all the venues, he needed some small and highly flexible lighting fixtures, and immediately thought of Robe.

Given the variety of venues on the itinerary, the idea was that the moving light towers could be easily positioned and manoeuvred on and off stage, four per side, giving the correct lighting positions every night. Each tower was rigged with the 14 x LEDBeam 350s and 14 x Robe DL4S Profiles and these were all used for numerous stage and cross stage lighting positions and key lights.

The DL4S Profiles were at the top of the frames and allowed Mark to highlight or close down different areas of the stage, with the LEDBeam 350s at head height used for washes and a host of funky effects.

Mark originally contemplated using the little LEDBeam 150 for its small size, but he ideally wanted something with a bit more punch. To his delight, Live Company’s new LEDBeam 350s arrived just in time! Knowing that these had “an excellent set of whites including all the warm tones and a good zoom,” the lighting design evolved from there.

Seven Robe ESPRITES provided all the upstage top light plus additional effects, positioned on a truss at the back.

The rig was completed with five Tetra2 moving LED battens in the footlights positions. These became essential to the style of the lighting, and a means by which actors could be followed subtly but clearly as they traversed the stage using a batch of Tetra2 pixels without needing excessive up-light, which looked very classy.
The whole rig – towers, ESPRITES and Tetra2s – was designed to fit everywhere, even in the venues with smaller weight loadings, and Mark believes that the ESPRITE is a perfect LED Profile for this type of venue circuit. For big musical numbers, the Tetra2s and DL4S Profiles combined perfectly for producing those full-on old skool up-lighters / mottled gobos scenes. “There were certain looks that I simply could not have achieved using any other lights,” elucidates Mark.

Every one of these well-chosen and positioned moving lights “worked extremely hard” to give him the results he needed.

He values the excellent colour continuation across the different ranges of Robe lights, a feature that the company has worked on extensively in recent years. He thinks Tetra2s are a brilliant moving footlight and that the ESPRITE is a solid, flexible workhorse light for this scale of project when you need something that goes wide but does not run out of power! He appreciates the ESPRITE shuttering and loves the shift between the shutters and thinks the gobo focus is “fantastic” with the crisp clarity of the optics.

Many of the talking scenes he could highlight from the sides with minimal top lighting, ramping up back lighting for the musical numbers with all the extra punch, atmosphere, and colour. Overall, plenty of detail was added through lighting with constant interaction between the lighting and narrative which also made the 8 metres of stage depth look and feel substantially more as the show developed, a collaborative creative process that Mark found exacting and demanding but also rewarding and fun.

He had only two weeks on stage with the cast for lighting programming before going on the road with around 370 cues in his ChromaQ Vista console which he also operated for the tour, and the end result was due to some fantastic and productive collaboration between Mark and director Mads.

Mark also highlights the “exceptional” service and support from The Live Company: “Nothing was too much trouble, they presented a very creative solution with the towers and were always a pleasure to deal with.”