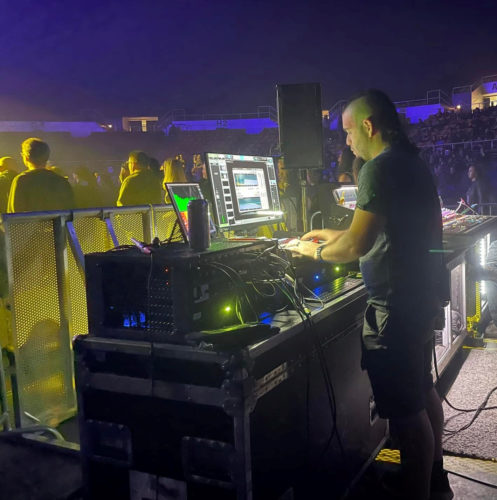 “When Queensrÿche were asked to join Judas Priest’s 50 Heavy Metal Years tour,” Peters says, “I was looking to finally get my own rig for FOH. The Waves eMotion LV1 mixer seemed like the smartest fit. As the opening act, I knew we had to be 100% self-contained; and for some shows, being double-stacked was the only way I could set up my own console. The LV1 allowed me to do that: it is extremely powerful, but it is also so small that I could set it up anywhere.”

“When I got the rig a few days before our rehearsals,” Peters continues, “I was blown away by how great it sounded. The first show was great, and getting the console really dialed was fun. The LV1 sounds so good live, which is amazing considering how small it is. Also, I had already owned a large arsenal of Waves plugins before using the Waves LV1 mixer, and it was great to start using them so seamlessly inside the LV1.”

“An additional valuable asset,” he adds, “is that with LV1 my setup time is maybe ten minutes max. When I get to the FOH area with my two Pelican cases, it takes three minutes to set up the desk where I want it, and then plug in the few cat snakes and power cables and get it booted up for the show.”

The ability to easily do virtual soundcheck anywhere is one of the LV1’s key benefits for Peters. “One thing I love about the LV1 is that I can sit around on a day off, bring two of my Pelican cases into a hotel room, hook up the rig, and use virtual soundcheck from a previous show recorded with Reaper. I then listen to my mix and then tweak it even more, without a PA. Just plug in some headphones and mix away, change presets, change effects and I get what I really want, without wasting time in a venue—a life-saver when I simply don’t have enough time on the day of the show. I can get the results I want anywhere I am; as long as I have some headphones and power plugs, I’m good to go!” 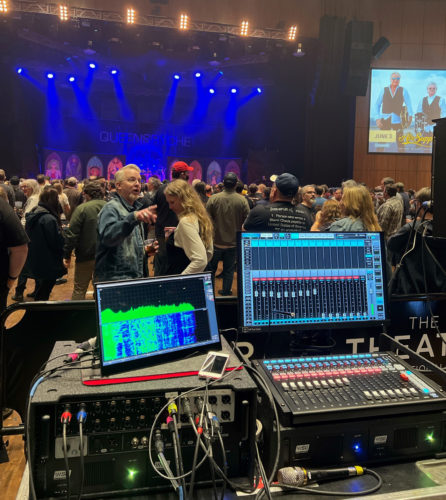 Peters’ eMotion LV1 setup fits in four Pelican cases. His main FOH case includes a Waves Axis One computer; a SoundGrid® Extreme Server-C; a Waves FIT Controller (a tactile control surface custom designed for the LV1), and an HP Touchscreen enclosed in an OCD Labs Custom Case. His second Pelican carries a SoundStudio STG-1608 for I/O at FOH. “I wanted something that had more than four outputs, and this seemed like the best fit. There’s also a second Axis One for backup purposes and a second Extreme Server-C for redundancy. I’m also using two DSPRO StageGrid 4000’s on stage, with the capability of doing up to 64 channels.”

Peters’ favorite plugins to use within the eMotion LV1 include the H-Delay Hybrid Delay: “I use it as an FX mainly for [lead vocalist] Todd La Torre’s vocal. I also use a hint of the Waves Doubler on the lead vocals, just to add a little bit of thickness. One more favorite for vocals is the CLA Epic plugin, which I insert on the lead vocal; this plugin gives me just enough options through one effect, where I can manipulate and saturate the vocal to have all the effects we like. For drums, I love using the H-Comp Hybrid Compressor – it’s on a few other channels in my console too, but I’m using it on my drum buss, thickening everything up and making it sound massive. The Vitamin Sonic Enhancer goes on my toms’ group buss, which is giving me enhanced drum sounds.”

“The fact I can now take my entire FOH rig and fly with it anywhere in the world is amazing,” Peters sums up. “Since my Pelican cases are less than 70 lbs each, I can go do any show and know that I will have the same rocking performance at every venue. With the eMotion LV1, I have the consistency and confidence of bringing my own console with me to every gig I do.”