After a two-year shutdown due to the pandemic, Rome’s May Day Concert finally returned to a Piazza San Giovanni filled with some 60,000 people without masks with the desire to party and demonstrate for jobs, rights and peace!
The so-called Concertone, presented for the fifth year in a row by Ambra Angiolini, was promoted by Cgil, Cisl and Uil, while the production and organization was commissioned to iCompany, which, with the slogan “At work for peace”,wanted to launch a message that would unite both the return to work for entertainment workers and the tragic moment of the war in Ukraine.
A cast of more than 50 performers took turns on stage to entertain and make the audience dance in a show that lasted for about 10 hours and with a live RAI prime-time connection that was attended by 3 million viewers with a Share of 10.4 percent. 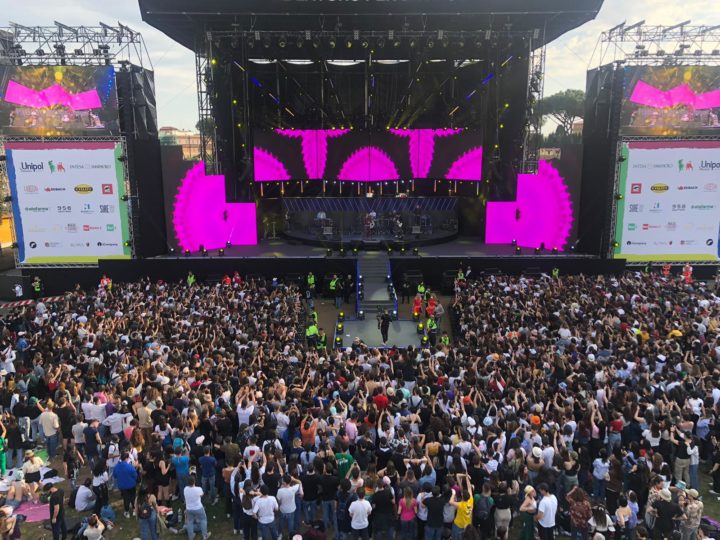 Several companies in the industry were involved for the occasion, one above all the very Italian K-array that designed and implemented the PA setup of the concert.
We spoke with Klaus Hausherr (product Specialist of K-array) who told us about the sound system. 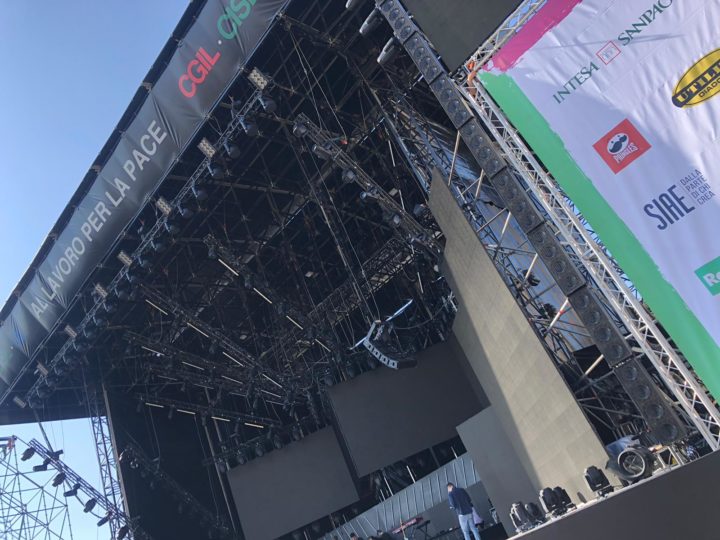 LightSoundJournal: Hi Klaus, how was the PA system composed?

Klaus: The system consisted of a main PA positioned between the Led screen and the stage, with 18 Firenze-KH7 (9 on each side) and a front sub line consisting of 9 Firenze-KS8 +, 10 Firenze-KS5 in a Digital Arc configuration where 8 Mugello KH2P I were used as Frontfills.

LightSoundJournal: In this case the EBS technology was crucial…

Klaus: Thanks to the EBS (Electronic Beam Stearing) technology it was possible to have uniform coverage while having arrays hung perfectly straight, with no angles, benefiting a very fast assembly and a very small footprint at the hanging points. 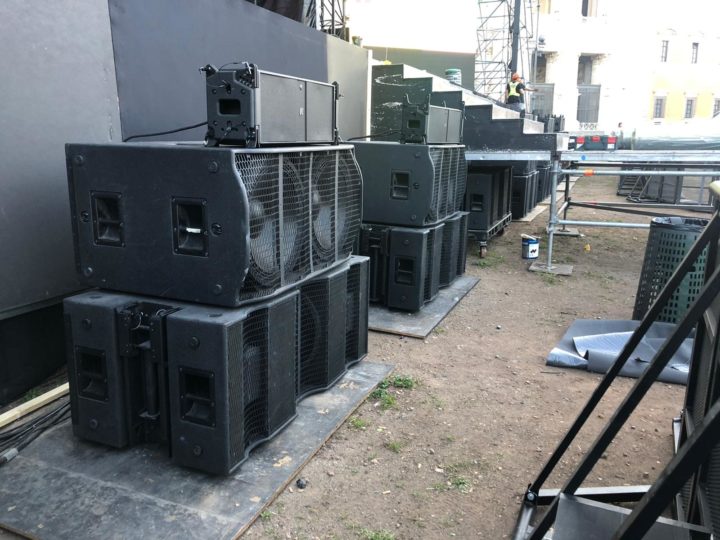 LightSoundJournal: Were delays set up? 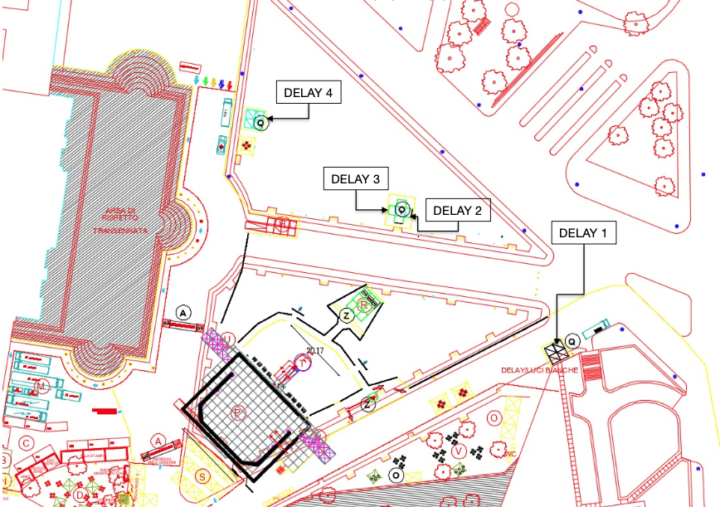 LightSoundJournal: You just mentioned Arcadia Service, what companies were involved for the audio project?

Klaus: K-array handled the design of the whole system by providing some of the material including 2 Mastiff-KM312 wedge monitors, two Drumfills consisting of a Thunder-KS3P I and a Dragon-KX12 as well as a Side Fill system hung on the stage with 4 Mugello KH2P I and 2 Thunder-KS3P I on each side! Service ABC and Arcadia were involved in the implementation of the necessary equipment! 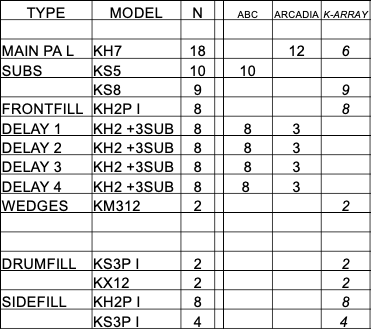 LightSoundJournal: How did you handle the signal management?

Klaus: The signal flow of the concert was all managed from F.O.H. through two Meyer Sound Galileo‘s that split the signals from the 3 Allen&Heath D-Live S5000 mixers to the P.A. Of course, everything was remotely controlled by a networked computer so that I was free to move around the square! 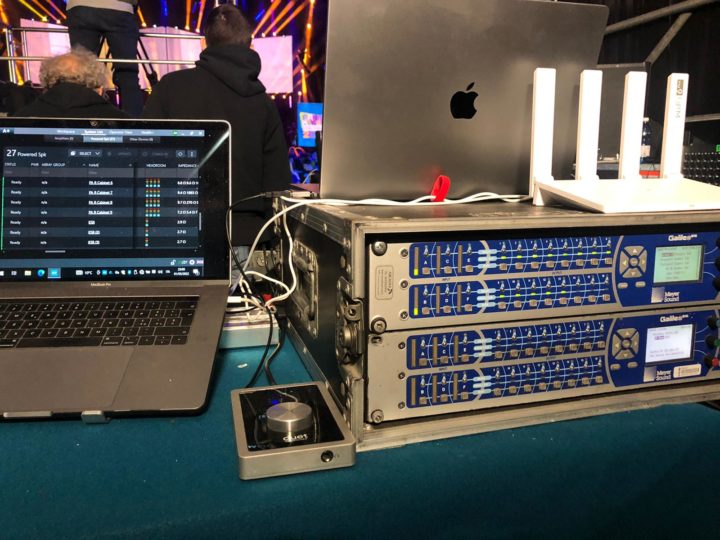 LightSoundJournal: What was the focus in designing the system?

Klaus: The main goal was to create as much uniformity as possible over the whole area involved, and I must say we succeeded. In fact, from my point of view, I was very satisfied: the production was delighted, the system, despite being invisible or almost invisible, performed very well and worked in a good range without ever going into clipping, and I also received a lot of positive feedback from the sound engineers who followed during the day!

LightSoundJournal: You mentioned a powerful but almost invisible system, what is the secret?

Klaus: Definitely the Slim Array Technology (SAT) was crucial in this process! The compact shape and loading of the transducers was designed to result in a fast and stable impulse response that allows complete control of the spectral components of the signal and the directivity, favoring a powerful and extremely defined sound. The speaker design, which is partially open at the rear, creates a cardioid directivity that limits resonances inside the box and minimizes the risk of feedback on stage! 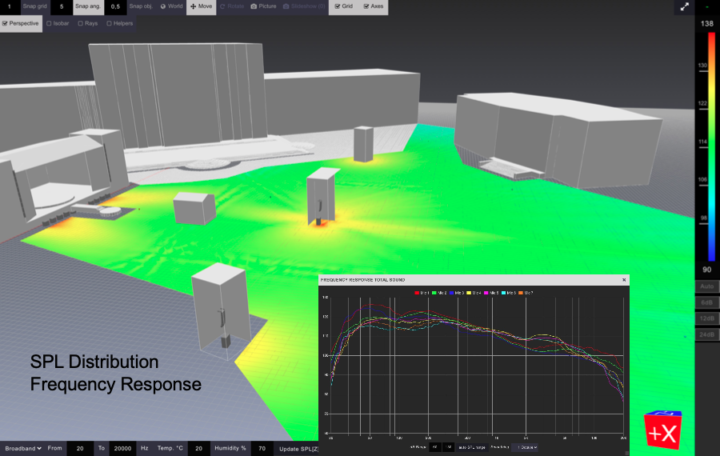 We also interviewed Enrico Romanelli (F.O.H. engineer for the event) to get his opinion!

LightSoundJournal: Hi Enrico, how did you find mixing on this system?

Enrico Romanelli: I was pleasantly surprised by the performance of this system. It was one of the first times I used it, certainly the first in such a large venue.
We mixed probably about 40 bands, and therefore totally different music programs, and the P.A. system always responded optimally. We even tried to stress it more than we should have and the system never gave a hint of criticality, it always responded perfectly!

LightSoundJournal: Was your impression also confirmed by other colleagues who took turns during the day?

Enrico Romanelli: So many sound engineers who took turns at the console during the day confirmed my impression. All of this, not to be underestimated, in a condition of no aesthetic impact. It is basically like having an invisible sound system. How many times over the years have we been faced with customers who told us, “the sound system must not be seen… .” Surely there is no better choice! What can I say…much more than only a positive experience!