Iconic multi award-winning composer, producer and “rock star of film music” Hans Zimmer hit the road this spring on a much-anticipatedtour.Delayed due to the pandemic, but worth every moment of waiting,as the artist and a host of talented musicians – his 19-piece band and an orchestra –delighted fans all over Europe with outstanding performances. 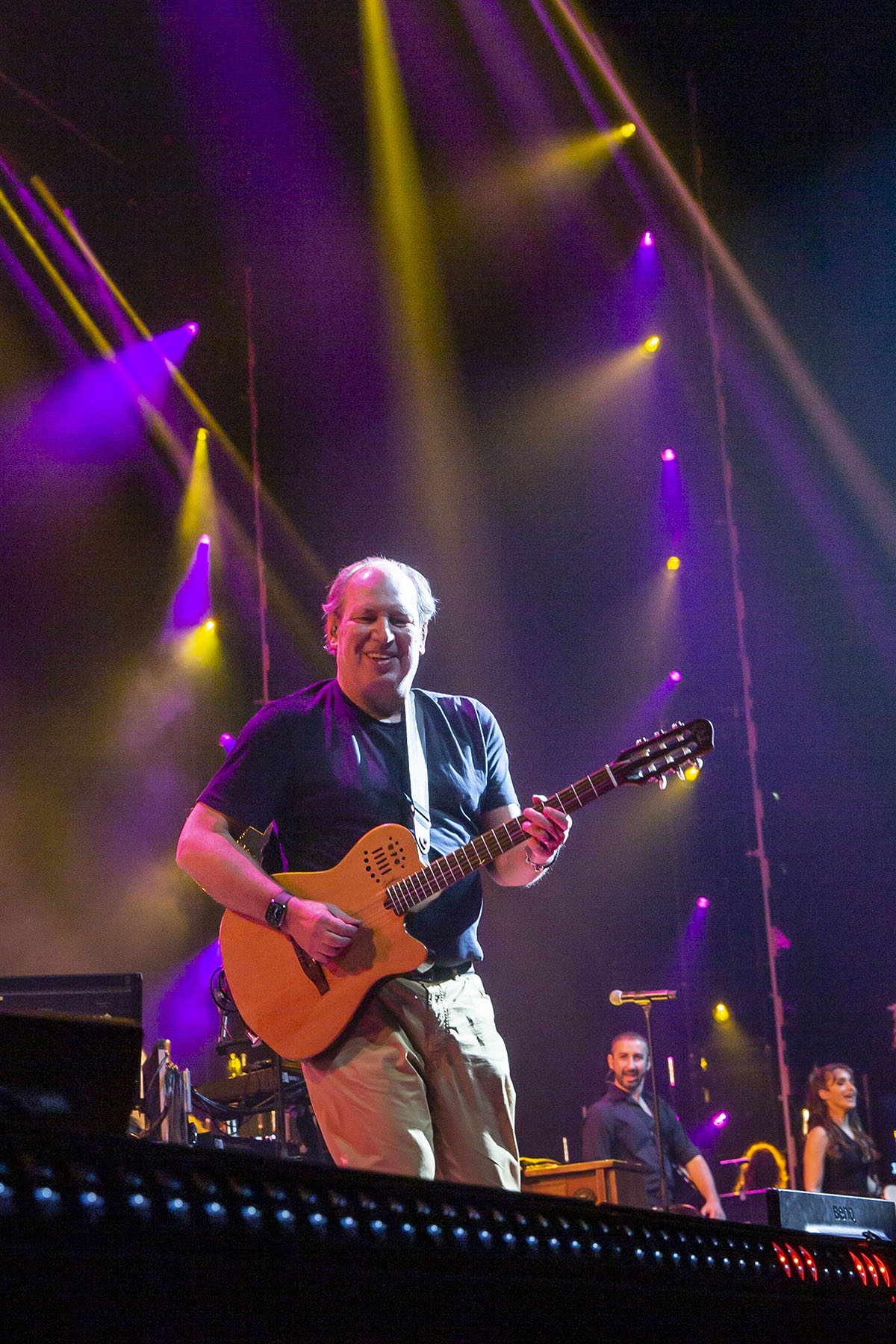 An eye-popping lighting design was delivered by John Featherstone from lighting and visual design studio Lightswitch. John and his team pushed for an all Robe moving light rig for the tour which started production rehearsals in Berlin with 250 Robe fixtures onboard ahead of the first European leg, with lighting equipment supplied by German rental specialist, Satis & Fy.

John explained how the design process originally started back in 2019 / 2020 with Hans curating his creative ‘dream team’ which included renowned Broadway set and scenic designer Derek McLane, video designer Peter Nigrini, choreographer Barry Lather, and of course, himself. “Hans is a master at putting collaborators together,” stated John, and in this case, hand-picked a team of experienced practitioners known for their flair and style, all of whom brought their own dynamics from different disciplines to the Zimmer-sphere.

The lighting team was rounded out with John’s daughter Hailey Featherstone as lighting director and Chris Herman as programmer. “I was really fortunate to have such a fabulous team working with me, they really embrace collaboration and making this job great and rewarding!” he noted.

It was the breadth,richness and detail of the music that inspired the team as a starting point for the lighting design. 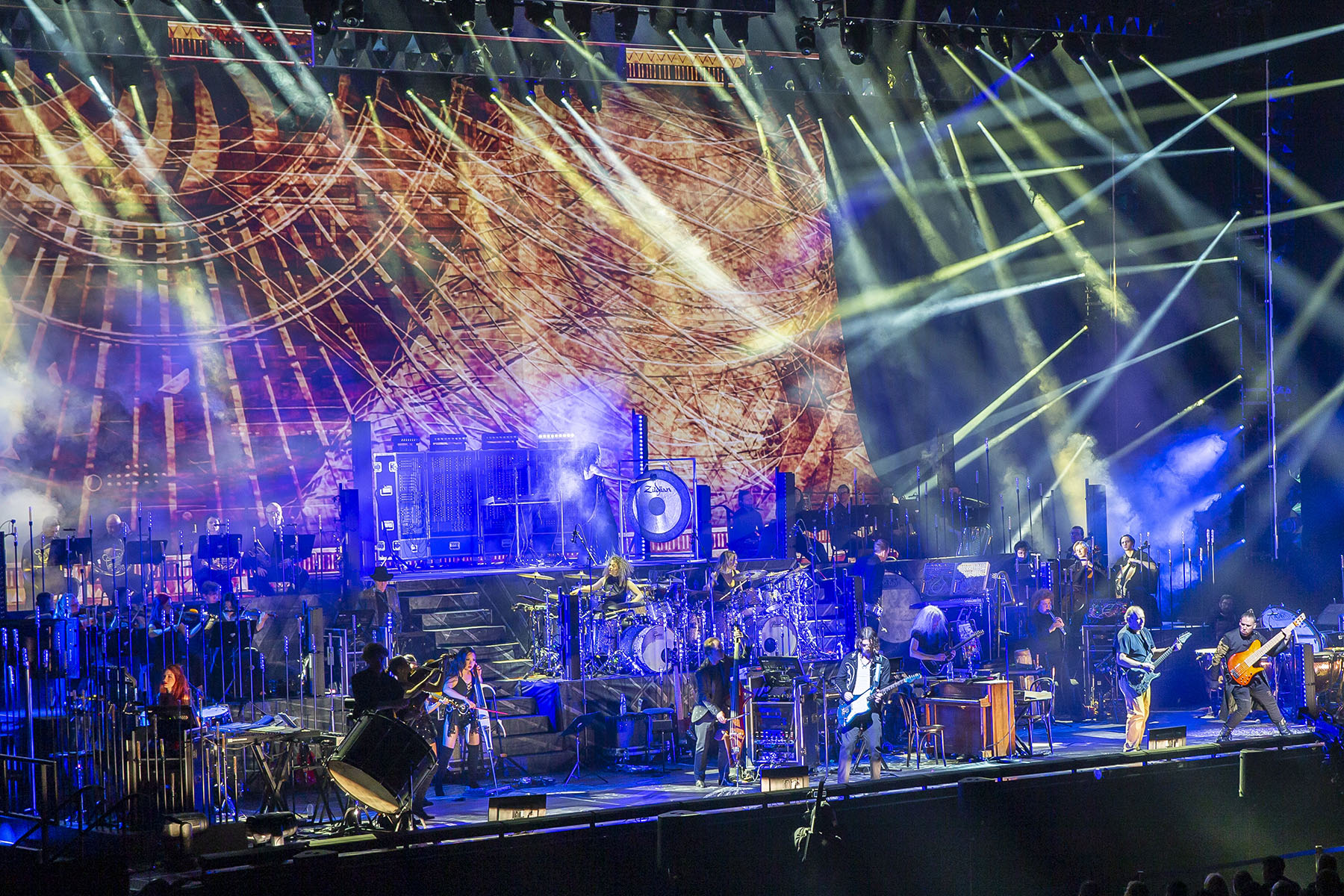 Hans had arranged twelve vibrant new suites of his greatest hits to be played throughout the three-hour performance… using over 300 instruments in total with some numbers accompanied by an 8-member dance / chorus troupe choreographed by Barry Lather.

“With this much energy and diversity onstage– from Wonder Woman to the Lion King – I knew I needed THE most versatile lighting fixtures, ones that could morph and change constantly throughout the set,” enthused John, “and Robe’s MegaPointe was my go-to multipurpose fixture!”

In creative terms, John’s underlying quest was for the lighting to be ‘musical’ and that also brought him back to Robe fixtures.

“Robe makes really elegant luminaires, there is a very organic way about the way they look and move, and the colours are outstanding,” he commented.

He wasn’t shy with the MegaPointes, adding 172 to the lighting plot!

He is a huge fan of this fixture and the MegaPointe has been a ‘spectacular workhorse” for many Lightswitch projects, be it a tour or a slick corporate show, and when it comes to needing huge adaptability, John declares that he doesn’t “know a fixture that does it better than the MegaPointe.”

For the Zimmer tour, MegaPointes were deployed all over the rig …along the top trusses and populating the three left-and-right side stage verticals, with a few on the downstage edges of the floor. 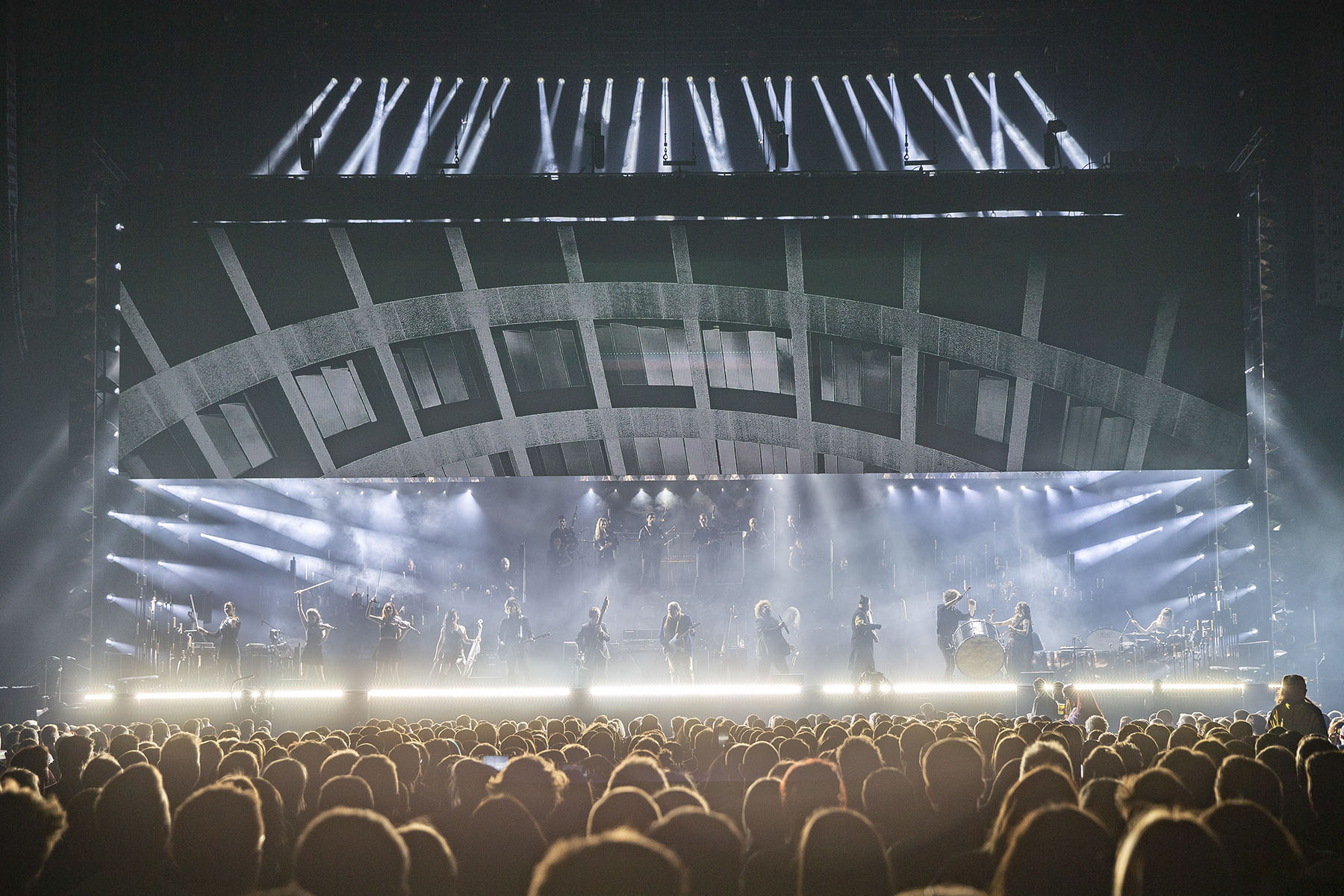 Six of the overhead trusses moved on a Cyberhoist system enabling John to integrate several‘automation lighting’ cues into the show, whereby the trussing hardware moved while the lights onboard remained static and on. This offered a contrasting and often subtle element of motion from the light movement itself and worked brilliantly in terms of physically transforming the shape and architecture of the stage space.

One of the advantages of lighting a longer show is that you can unlock a whole Pandora’s Box of visual tricks and magic over time, keeping everyone on their toes with little aspects and moments of surprise.

While the stage had an epic film look at times with the overall big, wide screen appearance, when this split horizontally and the top half tracked up, it became stylishly concealed and unobtrusive and framed the rest of the stage, which wasa characteristic of Derek McLane’s skillful scenic setting and Peter Nigrini’s thoughtful and textured visuals.

John loves working with Peter as he is very conscious of how a screen functions not just as a visual treatment but also as a lightsource.

Sometimes in the set the screen was off completely, while other times it was used subtly for moiring-style effects, and it certainly wasn’t always obvious, even for its physical size. This intelligent approach to content and screen design made the whole setting more intriguing.

Another reason John needed intense fixtures like MegaPointes was to ensure a presence onstage and to work optimally with these substantial video aspects.

When the top screen flew out, it effectively became an IMAG surface – like binoculars – for those further down the arena, leaving the stage and the action on it (and not the moved screen) very much the full focus for those sitting nearer. 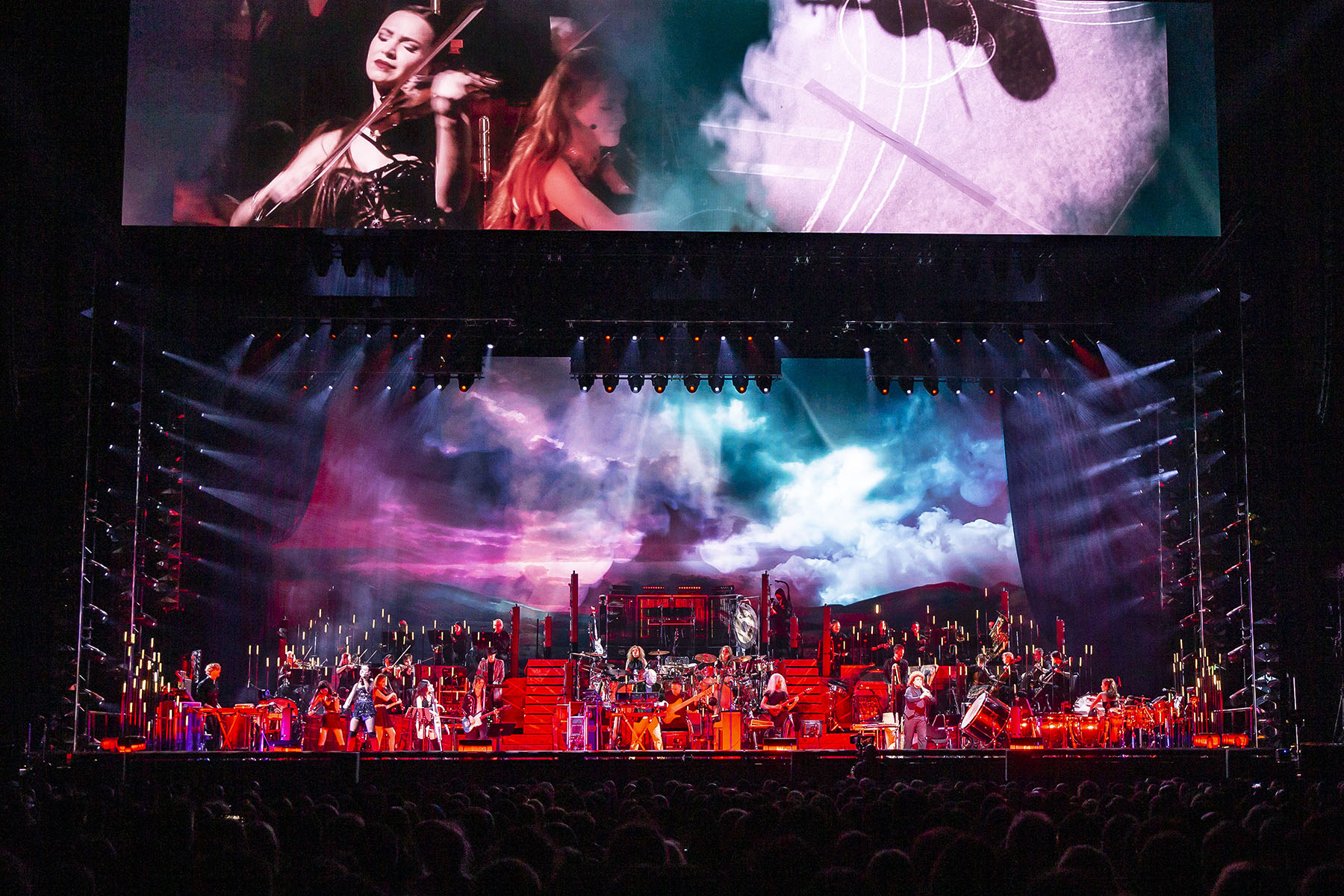 The upstage screen use was restrained through the first half of the show so there was a conscious emphasis on lighting, and the palpable atmosphere and excitement was ramped up similar to a film as the show had a proper narrative arc. With the first bars of the Wonder Woman medley, the trusses started moving for the first time which brought the house down every night, followed by a gentle increase in screen content as the production started building to a unique and beautifully dramatic sonic and visual crescendo.

“Working with Derek, Peter, and Hans himself who is very involved with the stage presentation …was one of the most enjoyable parts of this project,” related John, who has clearly relished every minute of the process and – ever his own worst critic –is “extremely pleased” with the results.

For key lighting the orchestra and band– who covered a substantial area– John turned to another Robe favourite, 24 x BMFL WashBeams and six BMFL WashBeam Follow Spots. Of the latter, four were on an advance truss above the audience out in the house and two were on two of the mid-stage moving trusses for neat and tailored back light.

The BMFL FollowSpots, operated via six BaseStations located backstage, were for the principals and soloists.Their main parameters were controlled via the lighting console so the operators could focus on the following, and “they worked exactly as we envisioned,” commented John.

For the first time ever, John used Robe’s Tetra range of moving LED battens in a show design, adding a row of 36 x Tetra2s along the whole downstage edge of the stage, plus 32 x Tetra1s rigged above the stage in key positions on various mid stage trusses.

The Tetra2s made excellent footlights he reports and can also be used to createaudacious sweeping curtain-of-light effects one moment, then be transformed into a jaw-dropping effects look the next moment applying the flower effect for delicate filigree-style tracing particles of light which John particularly loved from this low-profilefront-of-stage position.

“The Tetra range is really impressive,” he commented,adding that he is sure he will be using them again in the future! 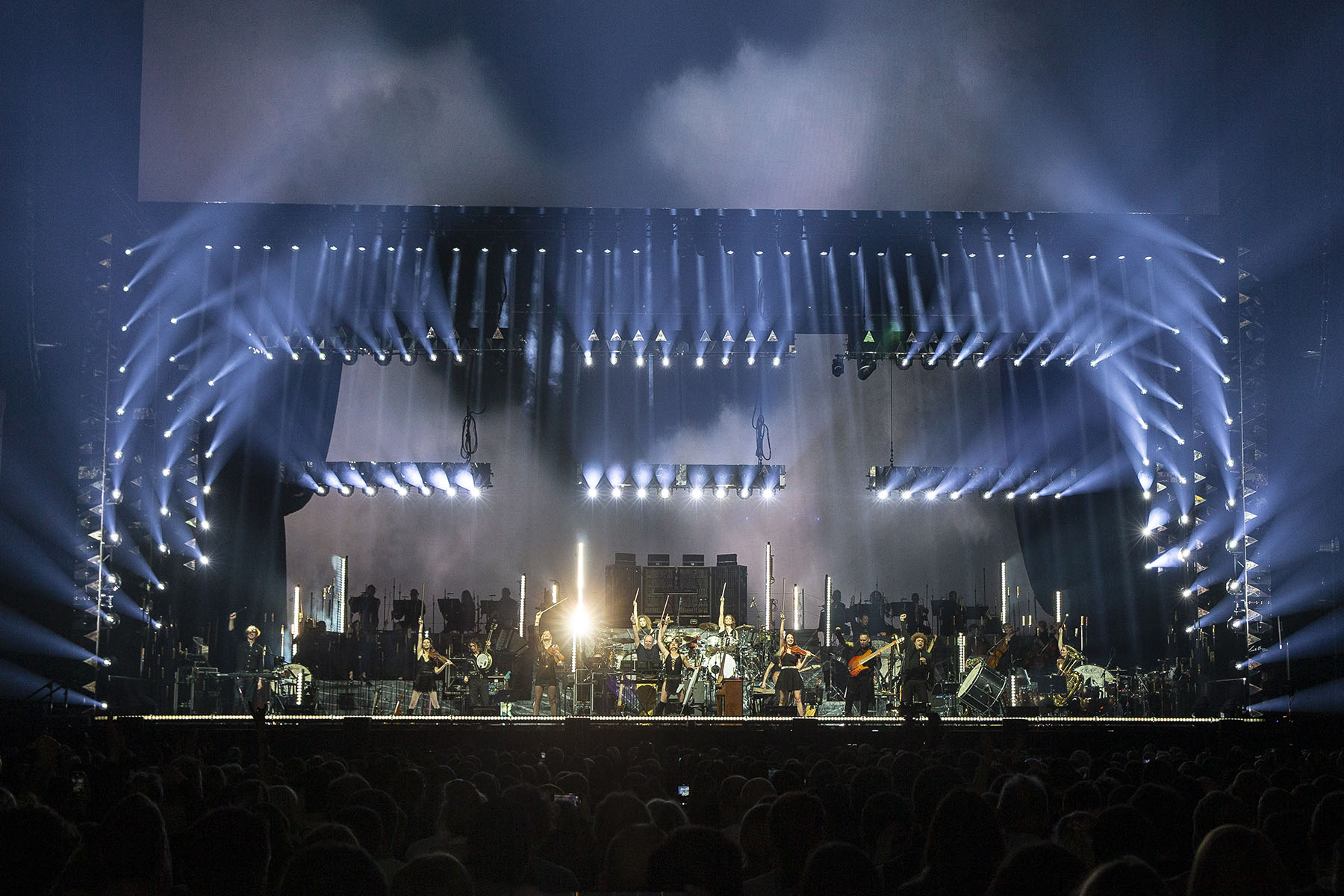 Talking about Robe more generally, John appreciates specific characteristics that the luminaires bring to a designer: “The colours are beautiful and the colour continuity between different types of fixtures is really important – with Robe they have paid attention to this for some time, they are thinking in a proper grown-up lighting world!”

John also appreciated the great family atmosphere on the tour, and especially when his own daughter Hailey was able to clear her busy schedule and join the team as lighting director and operator for the tour. John, Hailey, and Chris Herman from Lightswitch programmed the show and did one month pre-vis in New York before decamping to Europe and production rehearsals before hitting the road.

John also mentions the “outstanding” service they have received from Satis & Fy on this tour as well as commenting that both Robe’s North American and German subsidiaries were instrumental in making several logistical challenges happen like short notice custom gobo deliveries.

The sold-out tour finished its first leg to fantastic reviews, and everyone is hoping for more live shows in 2023.