American country music singer and songwriter Luke Bryan wanted to make a spectacularly BIG impact for his first Las Vegas residency shows at the Resorts World Theatre, so he hired show designer/director Brian Burke and lighting / set designer Tom Sutherland from DX7 Design to work their visual magic on his much-anticipated performances throughout 2022. 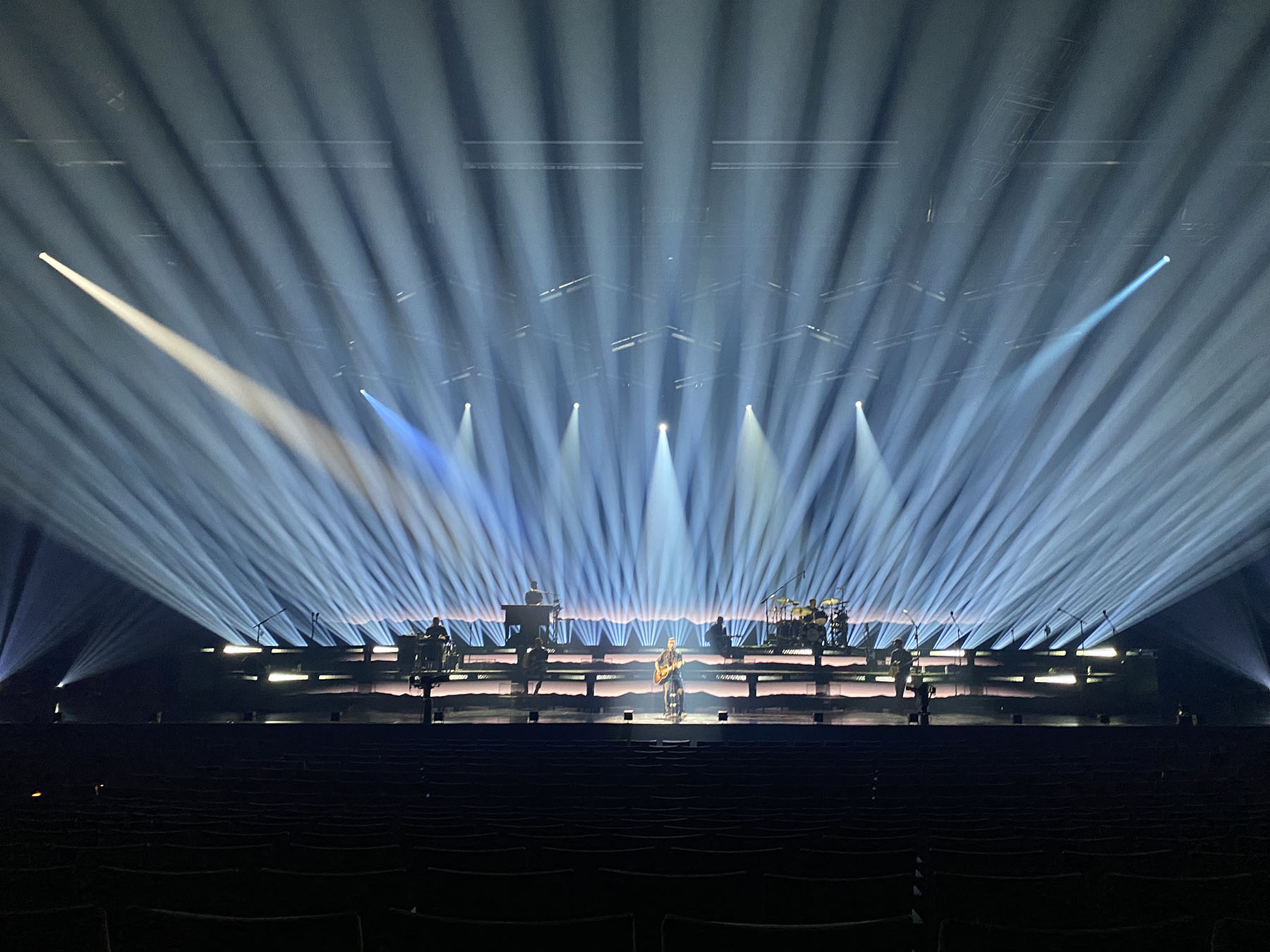 As the show design started to evolve, Tom and his team were delighted to discover that the house lighting rig at the brand-new 5,500 capacity Resorts World Theatre venue … features large quantities of Robe moving lights, all of which were supplied by Solotech, who completed the install and also co-ordinate the venue’s on-going technical services.

Tom lost no time in getting 108 x Robe MegaPointes on the lighting plot for his main effects lights, together with 54 x Tarrantulas – Robe’s largest LED wash beam – and 17 x BMFL WashBeams which are all running on the theatre’s four RoboSpot systems.

All these fixtures were just what Tom needed to develop the “full throttle” rock ‘n’ roll show he envisioned to stun and WOW audiences and present Luke Bryan to his fans, in the process taking country music productions to a new level of excitement and drama.

Tom and Brian Burke have collaborated on several other projects including for Westlife’s most recent live shows and enjoy a great creative synergy. Tom first met the artist whilst lighting the 2021 series of American Idol. 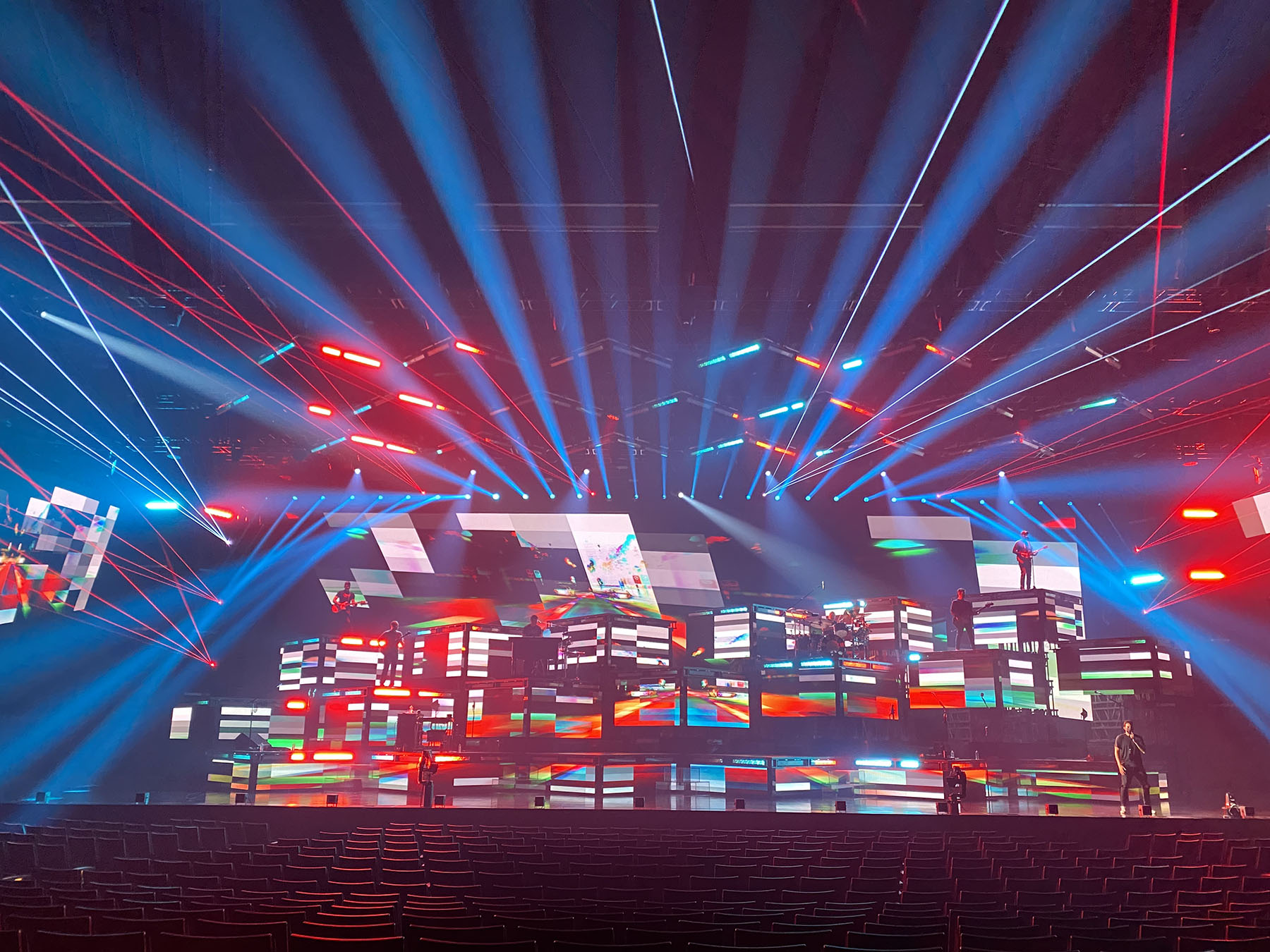 The production was initially designed in December for a show opening in February, so it had to be imagineered and green-lighted swiftly and smoothly.

Opting for an epic widescreen look, the upstage LED screen was 100ft wide as Tom knew he had the fire power to blast right through that with MegaPointes and Tarrantulas.

Downstage of that were a three-tier moving set based on a series of diamond shapes which is a cornerstone of the show environment. For time and convenience, the set was designed around lifts and hydraulic products that set builders SGPS/ShowRig already had in their inventory.

Band members are positioned on each layer of the risers which can extend from 5 to 20ft. They have customised video fasciae and tops, and are internally lit with strobes and LED fixtures, offering an eye-catching architectural element combined with the LED screen.

Utilising the straight trusses in the stage roof as hanging points, the riser geometry is mimicked with LED battens.

There is a complete MegaPointe surround to the screen.

Thirty along the top and bottom edges with seven a side left and right, consuming 74 MegaPointes in total. “I needed very bright multi-purpose fixtures and MegaPointes were perfect,” enthused Tom, who has used them on many other designs.

They are in fact one of his ’go-to’ fixtures both for the scope of the features and creativity this offers and for their reliability, and he has regularly specified Robe products for many major shows like the VMAs, EMAs American Idol, the People’s Choice Awards, and other high profile music TV productions.

The other 34 x MegaPointes are carefully placed on the overstage trusses ensconced in between the chevron-shaped LED bars.

The Tarrantulas are deployed on these same trusses, sometimes in between the MegaPointes and sometimes in autonomous positions.

Six of the BMFL WashBeams are rigged on the most upstage truss with another 11 on the front truss, and these are used for all the key lighting.

Luke wanted a big party vibe to the show so Tom made sure to reveal multiple optical tricks as the show narrative unfolded, including a 192-fixture PAR can ‘rock wall’, which turned a few heads!

And that was by no means the only ‘special’ for this energetic and pacey show! 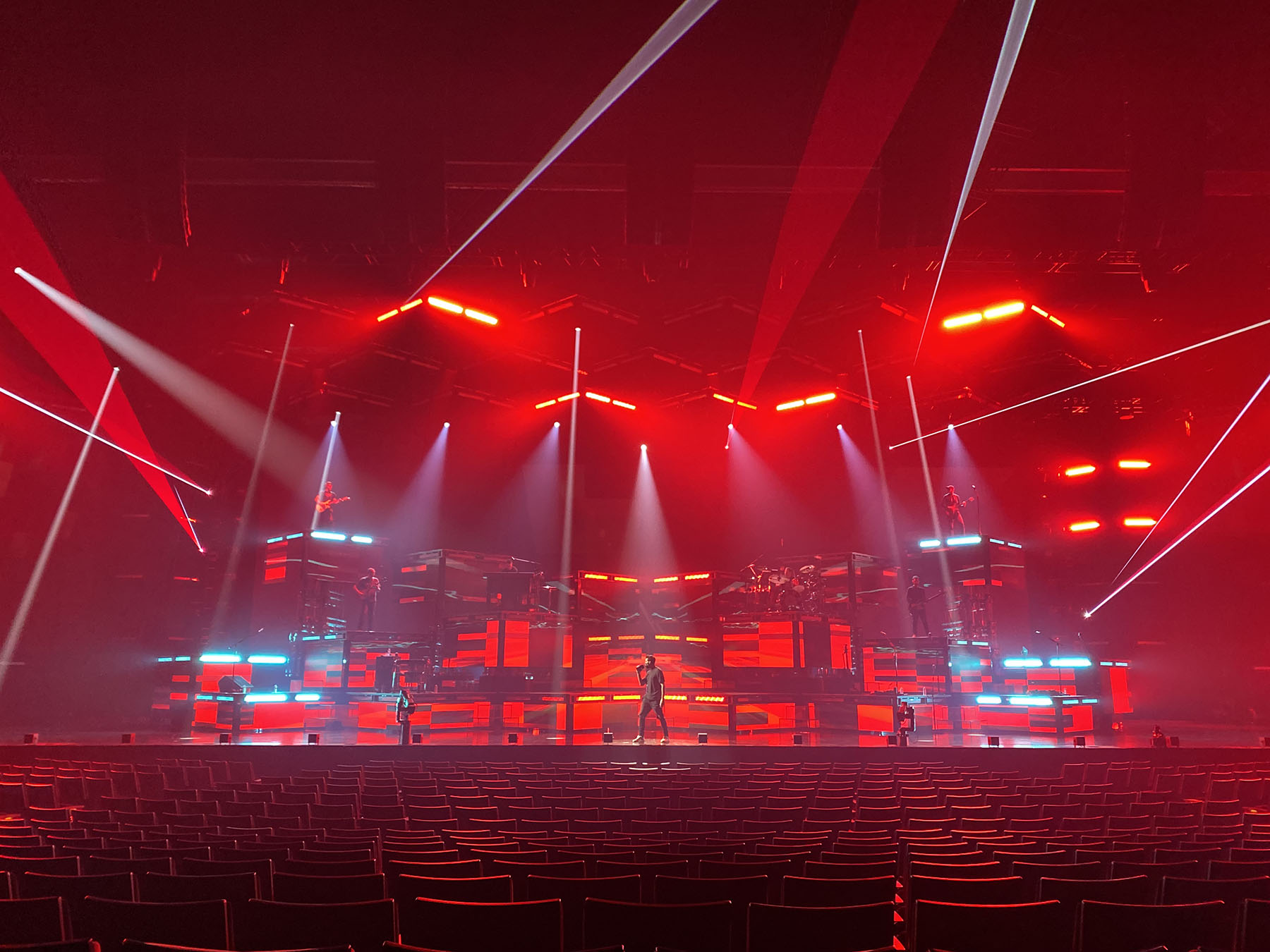 As the band struck up the opening chords of “Country Girl” for the first encore, Bryan descended from the roof strutting up and down a massive walkway with pyro and lighting blazing! The crowds go mad for this monumental moment that gets him right in front of fans on the first and second floor balconies, and for which he’s been honorarily designated the title ‘Luke Skywalker’ by both social and mainstream media!

“The first night that was a truly goose-bump moment,” commented Tom, who is known for his style, flair and for hitting the spot with atmospheric designs that have certainly resonated with this show.

On Tom’s FOH creative team were Hunter Selby who also assisted with the lighting design, grandMA programmer Joe Holdman, plus video director Scott Chmielewski. Custom video content was created by Gravity. Tom worked closely alongside the video team ensuring all the lighting and video cues were matched or contrasted in terms of light, shade, dark and using the negative spaces for a slick, seamlessly integrated show which is run to timecode.

The day-to-day show lighting operation / direction throughout the residency stints is being overseen by Justin Kitchenman, Luke Bryan’s long-term LD.

The first run – production managed by Gary Chrosniak and Bob Sandon – has just completed to great reviews and acclaim, the next is in June and the third is scheduled for September.