With a career spanning more than 50 years, and with over 110 million records sold, Scorpions are one of the longest-serving and most internationally successful bands in music history. With their latest album, Rock Believer, the band are tearing it up again on their 2022 tour. As a curtain raiser for this, the German band performed a residency lasting several weeks at Zappos Theater in Las Vegas’s Planet Hollywood resort. 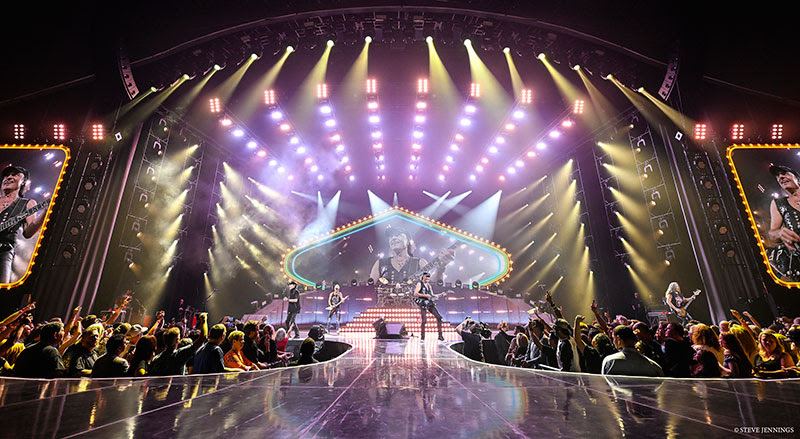 Manfred Nikitser, who has been Scorpions’ lighting designer since 2015, dug deep into GLP’s box of tricks for the lighting of this show, deploying 180 fixtures from the German manufacturer to bring out different facets of the elaborately designed stage set.

A fresh look was required for the new album, as well as the Las Vegas Sin City Nights residency and the subsequent Rock Believer world tour. Nikitser was responsible for creating the entire production design, including lighting, stage and video content. As creative director, he also ensured that special moments, such as the show opening and powerful drum solos, unfolded their full magic.

“The core idea of ​​the new design was to bring the band back to the fore. The stage architecture and lighting design should support this,” explains the globally renowned designer. “Everything should have a classic yet modern rock look.”

The central design element is the pyramid-shaped drum riser with angular surrounding stairs that are used by the band as performance areas. This is framed in the background by a metal structure in the form of a half ellipse, which in turn accommodates a wealth of lighting technology. 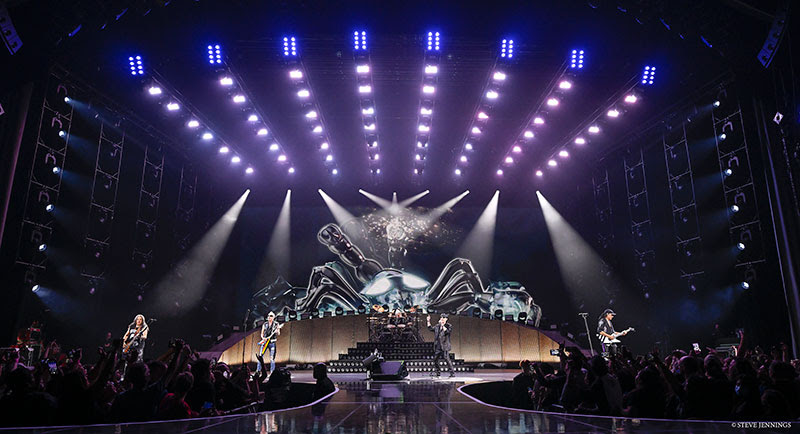 “We had Volt Lites in mind during the tendering phase because we knew that they had a very large GLP portfolio, and it was clear to us right from the planning stage that the special construction of the set would allow little flexibility in terms of lighting,” Nikitser says. “It was our first collaboration with Volt Lites; they have a great crew along with equipment in absolute top condition. They listen and really try to understand the design to achieve the best result for everyone.”

The JDC Line 500s, which are located behind the metal structure, create a wealth of possibilities in combination with the X4 Bars, which are set in front. “The enormously diverse application possibilities of the JDC Lines range from a clearly recognisable linear architecture to bright blinder accents and pixel effects which, in combination with the metal structure of the stage set, contribute enormously to the three-dimensional effect of the show,” the LD continues. “The JDC1 units which are placed on the floor can either enhance this effect or act as a counterpoint to it.”

As for the 73 JDC1s, 17 of the fixtures are on the floor with the remainder mounted on the stage roof. All the X4 Bars are also located on the floor directly in front of the half ellipse set piece, while the HIGHLANDERS are hung from ladders at the side of the stage. The X4 L units provide additional coverage to the left and right of the IMAG screens. 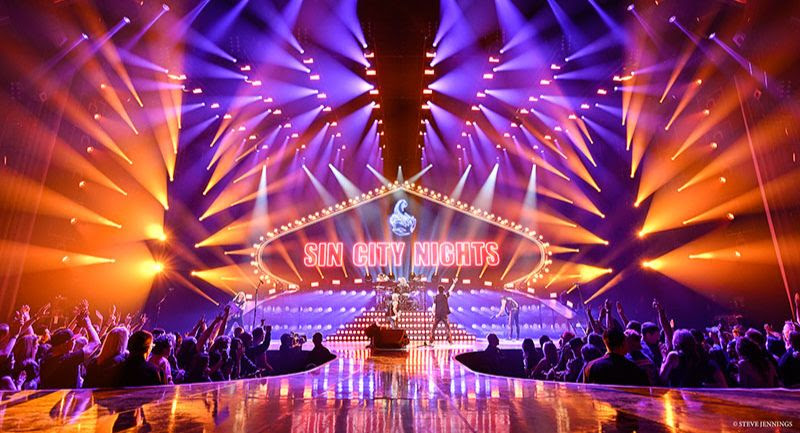 “I love the versatility of the JDC1, which allows countless different looks. In the Scorpions set, it was very important to me to use fixtures that support the architecture of the set: it’s about much more than just ‘just making it bright’,” Nikitser continues: “Because the JDC1s are right behind the band, they ultimately create and shape the space in which the band moves.”

“I’m also a big fan of the HIGHLANDER. Thanks to the two very well-equipped colour wheels, you can use this fixture to generate super nice looks with a lot of punch. The internal shutters are also a key fixture – irreplaceable when illuminating the band within the stage set. In my opinion, the combination of shutters, great colours and brightness sets the HIGHLANDER apart from all other wash lights in the market.”

Whenever Manfred Nikitser sets about a new design, you can expect to see GLP on the rider. “GLP is one of the few manufacturers that build really creative lights with extremely good LED quality. They repeatedly put themselves and their products to the test and integrate architectural aspects into product development,” he adds. “This means GLP devices so often enable design methods that go far beyond the possibilities of a classic moving light.”

The Rock Believer world tour begins on 6 May with a special at New York’s legendary Madison Square Garden, before continuing its journey, initially heading to Europe.