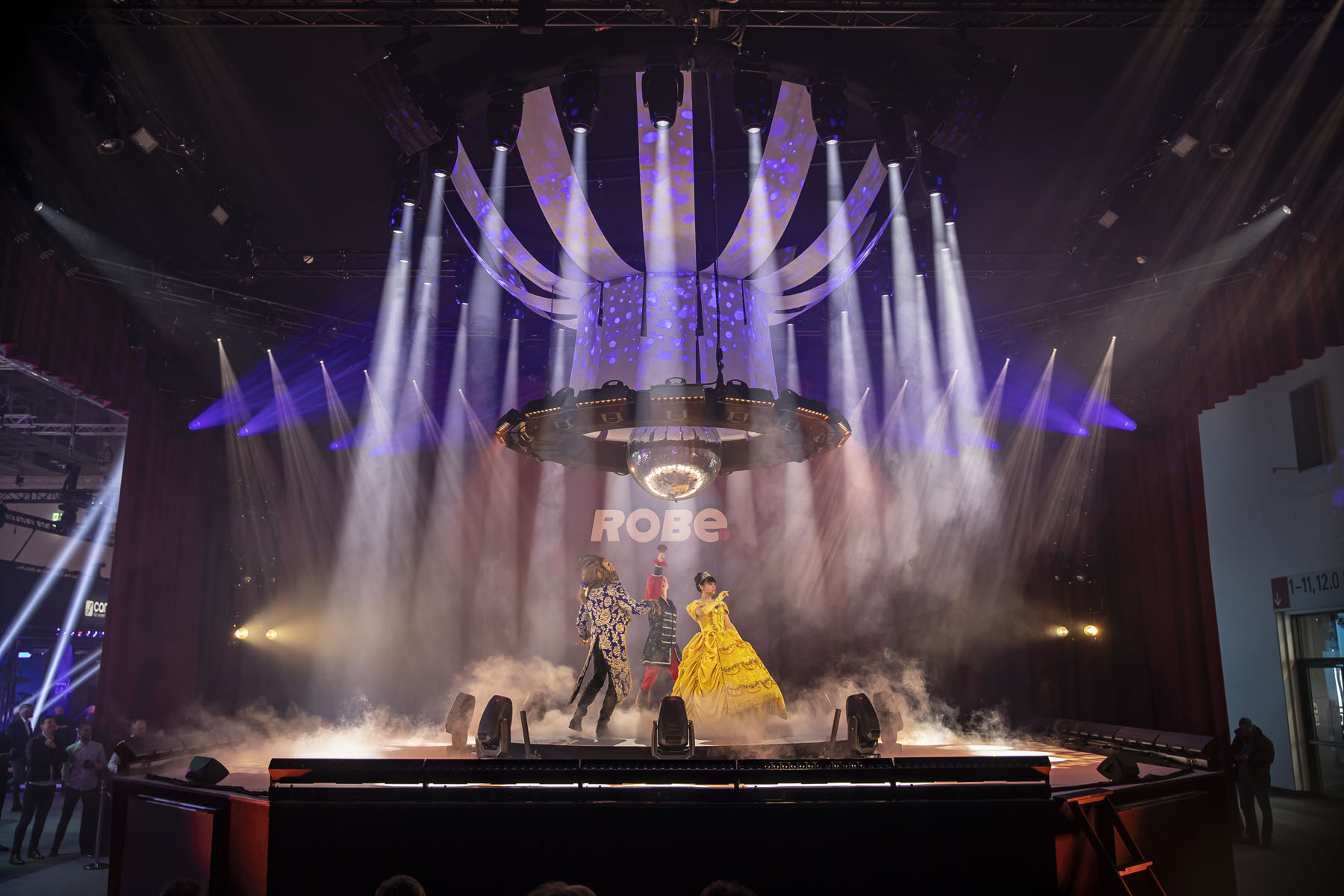 Robe made a very strong statement with the show, offering another outstanding booth design as well as launching five brand-new innovative products and showcasing five others seen for the first time at a major trade show.

The only P-words on people’s lips were ‘production’ and ‘products’ as Robe’s in-house creative team took the booth and the show to new levels of excellence and inspiration with this lively show that radiated energy throughout the entire Hall 12.1 of the Frankfurt Messe! And the only viral activity was on social media as photos and videos of the show were posted on the first day and enthusiastically liked and re-shared.

Robe’s CEO Josef Valchar commented, “Given the last two years with the pandemic, we didn’t have any specific expectations for Prolight this year, however the response has been extremely positive with a very busy booth every day that’s been a good hub for communication and generating great vibes.”

He noted that Robe’slive show was crafted specifically to illustrate how the different types of fixtures can be utilised, showing the product functionality and why they have been developed in a “real setting”that is new, fresh and so much more dynamic than a black box environment.

Josef added, “The industry is moving forward again in all ways, and of course, we all fully appreciated being able to meet up on person again here! It was a pleasant surprise just how many leading designers and production people came from all over Europe to say hello.” As always Robe’s live show was highly anticipated and together with the VOG presentations in between explaining the main product details, the area around the stage proved popular for people to meet and relax.

Two demo rooms, one private and one public, were constantly in action and helped keep the booth packed with people and interest for all four days of the expo.

For the final two hours of the show on the first three days, this merged into Robe’s ‘Get-Together Hour’ where the booth morphed into a bar and that famous Czech hospitality and good vibes continued to flow and embrace visitors from around the world.

Robe’s international marketing manager Pavel Nemec stated, “Opening the door to the hall and getting onto the booth was like coming back through the door to your house or apartment after being away! It was a special ‘homecoming’ feeling!”

A full Robe international team were on the stand with staff from all over Europe, the USA, Latin America, UK, Asia plus an enthusiastic team of Robe Germany’s NRG (Next Robe Generation) students.

Robe also revealed some other surprises during the expo, like inventive new tools to help the brand connect with its community, investors and end users offering more opportunities for all to learn first-hand and in-person about the products and their potential. The “Robe on The Road” show truck – a 45ft artic truck / trailer rig – was parked outside. This is a fully kitted out and expandable mobile showroom / studio / meeting facility, complete with roof deck, which will be tearing up European asphalt from spring until autumn!

The 10 minute,full-tilt CUETE & The Beastshow riffed on Robe’s recently launched CUETE moving light – with the CUETE being Belle and the FORTE playing The Beast – bringing a taste of West End glamour to Frankfurt, complete with elaborate costumes and a pumping soundtrack.

It was performed in-the-round by a talented cast of three dancers / singers supported by around 200 of Robe’s newest LED fixtures, picked, placed and programmed to show off their most impressive creative features. 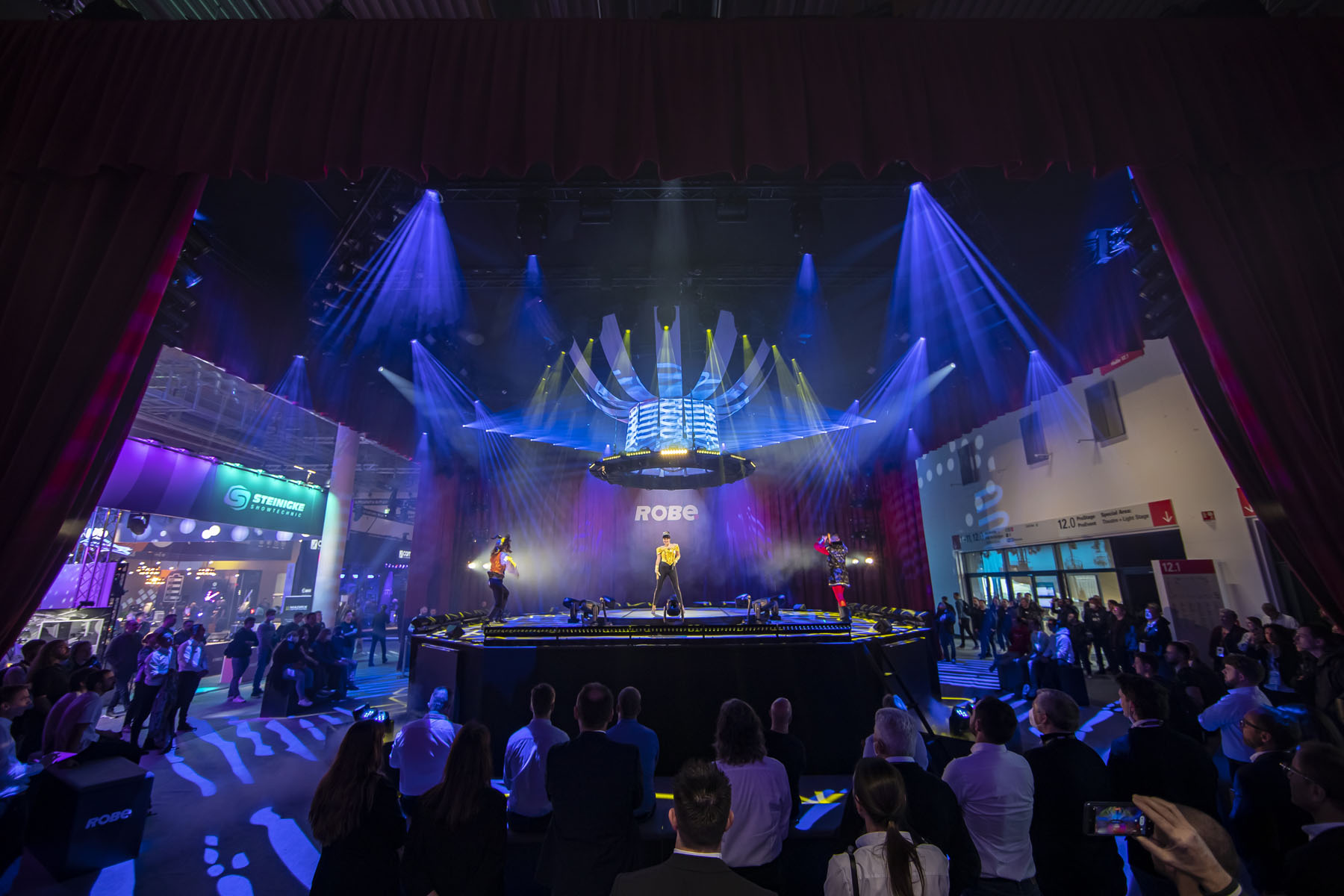 Each set of lighting fixtures had its own section in the show which was both an original, trippy, fun,and comedic parody that slickly amalgamated memorable snapshots from selected iconic musical stories.

“The ultimate goal was to show off the products in a theatrical-style environment with an uplifting and positive vibe and the narrative was designed around the kit we wanted to highlight,” commented Nathan Wan, Robe’s lead creative.

Andy Webbadded that the in-the-round designand 8 metre diameterraised stage was chosen for viewing angles– when the space and show was originally designed the covid regulations were also very fluid –and because it allowed everyone an optimal view wherever they were sitting or standing. This also maximised photo opps and Insta moments as the show was a massive draw for visitors. 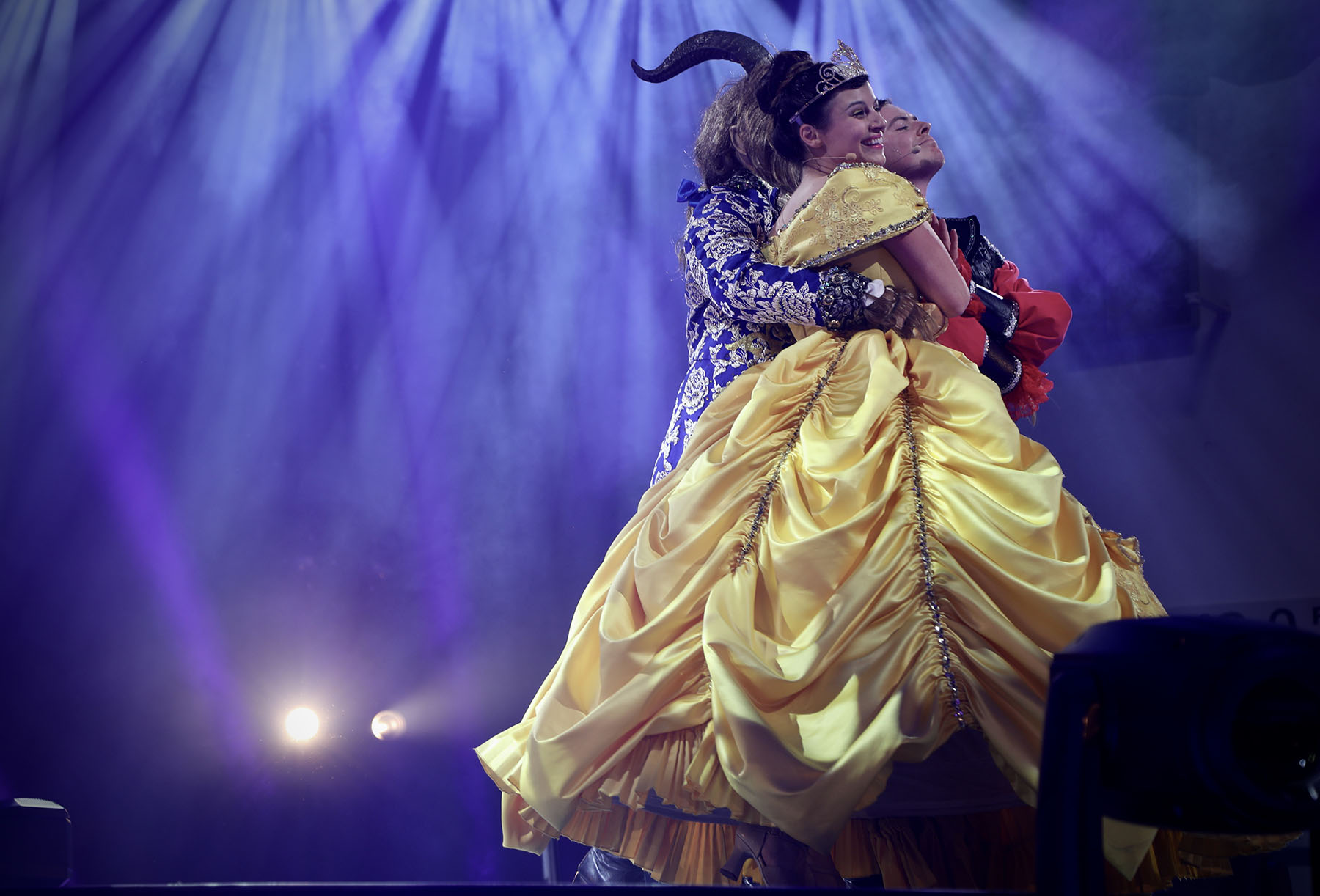 With all the technologyincluding an eye-catching centrepiece and epic mirror-ballreveal concentratedin themiddle of the showspace, it was a vast,open, and welcoming arena rather than a closed and shut off black box, and this was one of the major booth objectives.

The performance area was framed with authentic luxurious red velvet theatrical drapes, a continuity following on from the successful PLASA 2021 booth look where it emphasised Robe’s current product ranges that are refined for theatre and also kick ass for rock ‘n’ roll, television, and other genres.

At the end, all the lights all took their own bows so audiences could appreciate the contributions each had made to this lively, up-tempo productions which was fully produced – from the story boarding to the choreography – by Robe’s in-house team. Robe’s spectacularnew show truck provides an unmissable opportunity for people to follow the lights, offeringup to 180 square metres of fully mobile space to showcase Robe’s current trend-setting fixtures wherever they are needed for events and demonstrations–bringing the show anywhere in Europe during 2022!

Abrand-new website www.robeontheroad.com launched this week will support the Robe showtruck around the world and through which interested parties can book the truck and follow its travels and own news.

The trailer has specially designed roller shutter doors that open to reveal the rig – up to 50 fixtures, which is fully configurable to suit the event / demo / location–and a black box tentextension is rigged on the sideto provide a slick and streamlinedmobile showroom.

There is also a fullyair-conditioned VIP zone and bar inside the trailer, with access to a roof terrace that can be used for anything from meetings and discussions to a chill out space for enjoying the summer sunshine.

Already solidly booked for the first 6 months, the eye-catching show truck made its first appearance at Prolight + Sound 2022 parked adjacent to Hall 12.

It – and the onboard Robe experience – will be rocking and rolling to several key European festivals including Colours of Ostrava in the Czech Republic, Balaton Sound in Hungaryand Mysterylandin the Netherlands as well as a raft of special distributor and subsidiary events.

Robe’sshow truck is run by a permanent crew of two who will build up the truck and black box tent, stock and run the bar and take care of the cleaning. A Robe crew chief will assist with the organisation of each individual show truck event, including allocation of additional sales, technical and productmanagers, and other staff as appropriate. 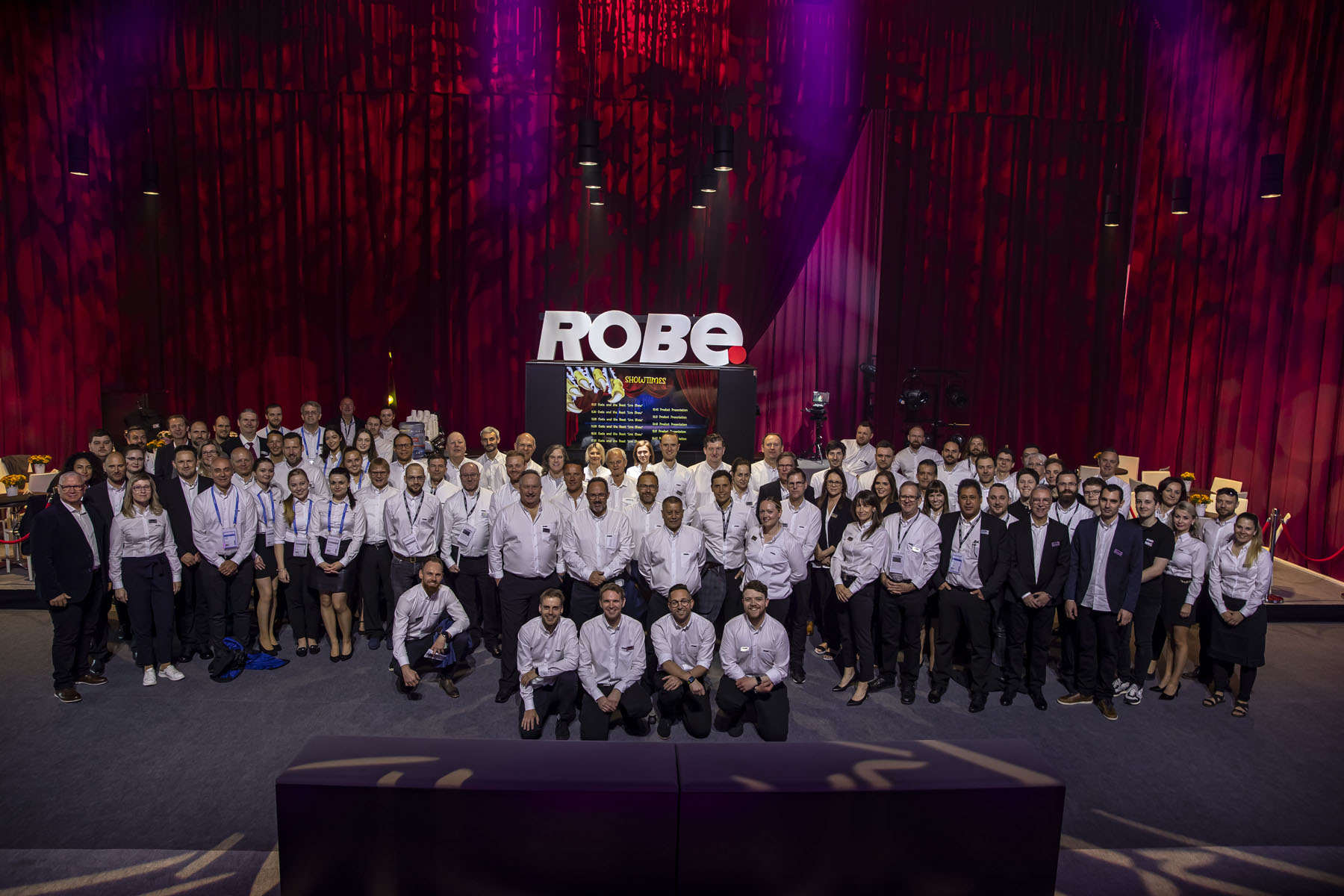 After a very busy and positive Prolight+Sound 2022 with lots of connections and positive feedback, the Robe team is ready-to-rock and pleased to be back in-person and looking forward to the whole industry moving forward after two exceptionally tough years!