The legendary band Genesis has reunited for “The Last Domino?” world tour, their first since 2007. Longtime Creative Director for the band, Patrick Woodroffe, worked with Roland Greil to design the set and lighting for the tour. Genesis core members Phil Collins, Mike Rutherford and Tony Banks kicked off the COVID-delayed tour last September in Birmingham, England then played a US leg in November and December.  The open-ended tour continues in March with dates booked in Germany, France, the Netherlands and England. 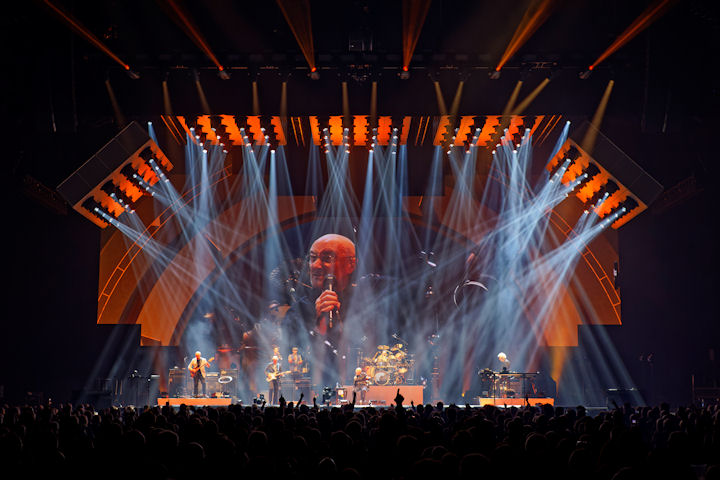 Photos taken in london / the O2-arena march 24th, 25th, 26th, during the last three concerts of the tour of
Genesis :: The Last Domino?

The lighting design calls for 148 versatile Claypaky Scenius Unico spot, wash and beam lights for the show, which were supplied by Negearth.

“As Genesis has a rich history of pushing the envelope in terms of show design, it was important to keep that momentum going for their return to the stage,” says Roland Greil.  “For Patrick and myself it was key to create a very versatile and theatrical design, which allows for all kind of different looks.  Therefore we designed a stage that can change its look and overall feel for each and every song giving them all a suitable look and feel.

“Over the stage we built five pods, which are fully automated to change the scenery,” he explains.  “Each of them holds 16 ClaypakySceniusUnicos and a linear array of LED Neon Flex.  Together with Jeremy Lloyd, who did the show’s technical integration and design for Wonderworks, we have designed 2mm high-resolution LED wall panels upstage as a backdrop, which track horizontally and can spin to reveal lights on the back of the walls.

“A decently-sized floor package helps to support the overall look from the floor or create imagery with the emphasis on strong floor lighting and silhouettes,” Greil adds.  “The whole lighting system extends into the audience to create an immersive experience for the fans and include the auditorium in the overall look.” 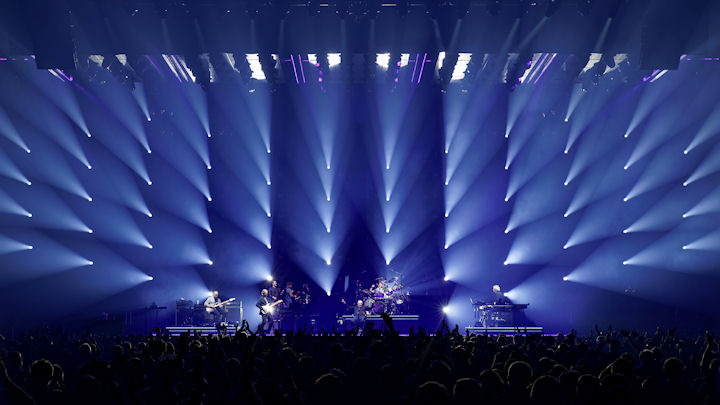 Greil and Woodroffe have found Scenius Unico to be “a proven workhorse” fixture for their shows in the past.  “It’s versatile and has a lovely big front lens, which works perfectly for an arena rig,” says Greil.  The majority of the Scenius Unico fixtures for Genesis are integrated into the five fully-automated pods over the stage with additional units mounted on two audience trusses and an advance truss.

“We’ve been happy with the reliability of the SceniusUnicos on the tour,” Greil reports.

Greil also acts as the Lighting Director for the tour.  Marc Brunkhardt is the Lighting Programmer and Joshua Key the Video Programmer.  Sam Pattinson and Giles Maunsell of Treatment Studio did the content design and production.