Here we are with a recap of the first day at ProLight+Sound in Frankfurt, where in spite of the absence of many big players, especially in the audio sector, we found a welcoming atmosphere, lots of news and a great desire to be there, to meet again and to get down to serious business.. Crowded stands, lots of new products and no masks are some of the emotions that we were able to experience first hand after 3 years.

Without getting lost in chatter, let’s start the usual round-up!

Steinigke chose Frankfurt for the launch of the Light Captain app, a tablet-based light controller with a wireless DMX interface that caters for both beginners taking their first steps in the world of event lighting, as well as demanding and experienced users. 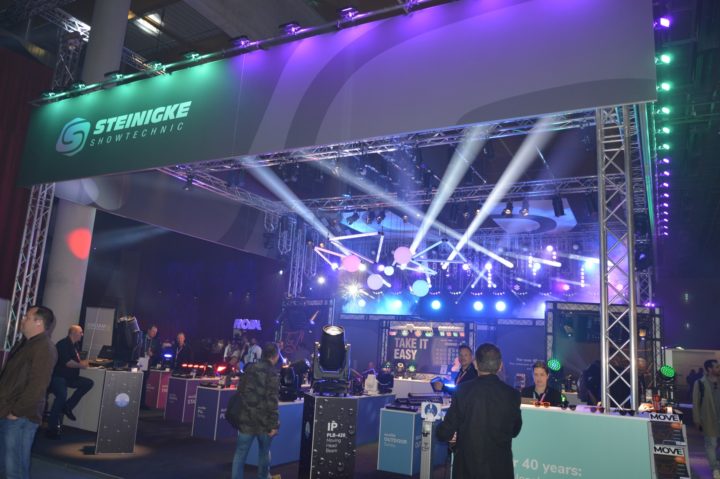 Light Captain is clearly and logically structured so that even inexperienced users can find their way around quickly. However, the app offers many solutions that also make the professional’s job easier and enable more complex lighting situations. 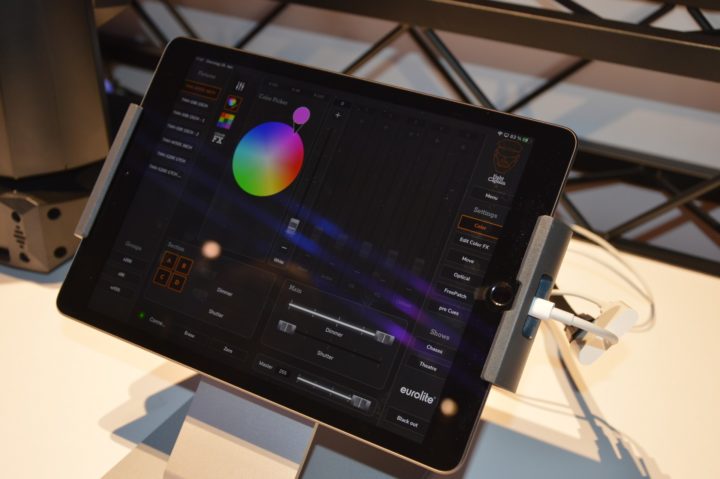 The app can be used to control all types of fixtures. The app is divided into different sections, from the more intuitive one where you can control different scenes or chasers by setting the speed or music-to-light operation, to the more complex ones where you can work in theatre mode by launching different cuelists with fade-in and fade-out times, managing up to three scenes simultaneously. In addition, there are three freepatch faders to which stand-alone memories such as hall lights, front lights or fog can be assigned. 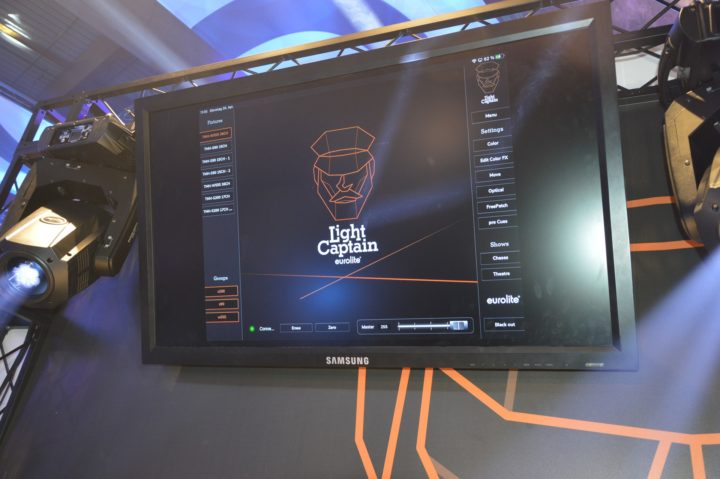 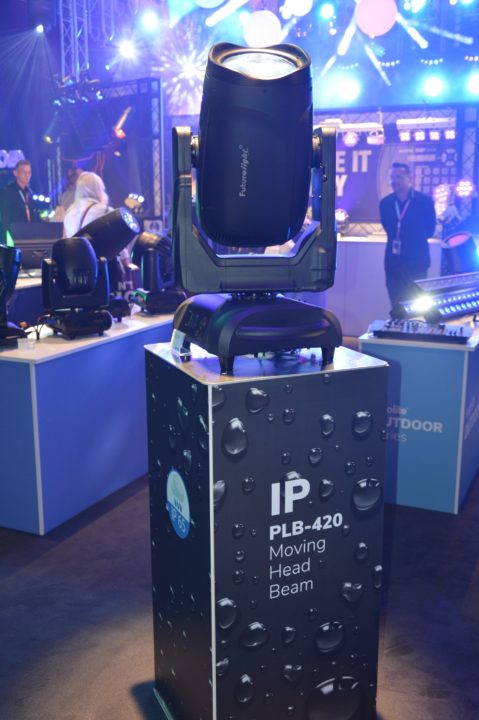 Elation returns to Prolight + Sound with some important new products, including the new Proteus Excalibur, the brightest IP65 beam ever created, and the world premiere of the 70,000-lumen Proteus Brutus LED wash! The new high-performance Fuze series projectors will also be on show, including the Fuze MAX full-spectrum moving head and the world premiere of the Fuze Wash 500, featuring a Fresnel lens and full-spectrum LED. 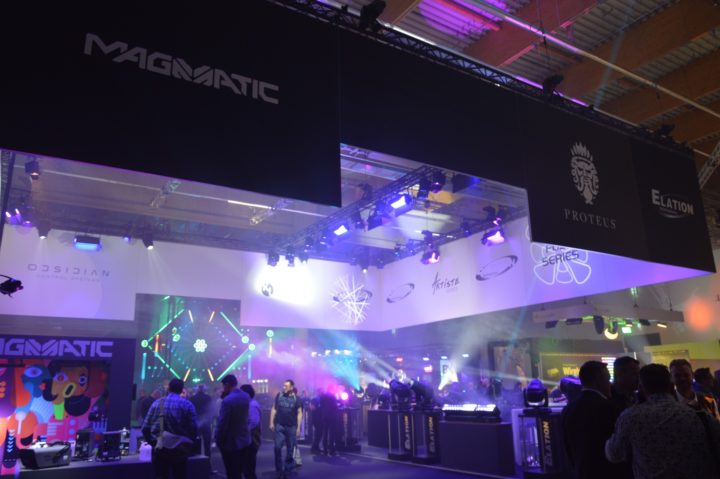 But that’s not all: there are also new KL Series products optimised for broadcast, including the world premiere of the KL Profile FC, a compact, full-colour ellipsoidal shaper, and the new KL Panel XL, a larger, brighter version of Elation’s popular full-colour, diffuse-light KL Panel LED.

Proteus Brutus: a powerful IP65-rated spotlight designed for high intensity wash in any environment. It is based on a high efficiency 1200W 6,500K white LED engine, operates with CMY colour mixing, variable CTO and 6-position colour wheel, includes rotating gobos, animation wheel, iris and frost. With a beam angle of 4° to 45°, the Proteus Brutus cuts through the sky at great distances.
Proteus Excalibur: The Proteus Excalibur is the most powerful IP65 beam with CMY colour mixing ever, set to become a standard in its field. With an output of 20,000 lumens, a 0.8° beam angle and a wide frontal aperture, it excels at creating aerial beams, colour casts and effects that rival xenon projectors. 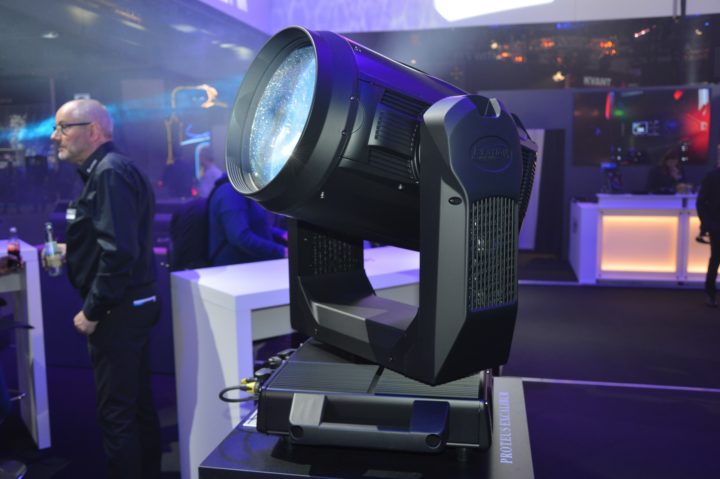 Fuze MAX Spot / Fuze MAX Profile: The Fuze MAX is a 21,000 lumen full spectrum LED moving head with an RGBMA (92 CRI) LED engine that rivals 1000 / 1200 W discharge fixtures. Available in Spot and Profile versions, the Fuze MAX is designed for precision lighting applications such as theatre, broadcast and houses of worship where a particularly wide colour spectrum is required.
Fuze Wash 500: A full colour spectrum moving head LED Fresnel projector designed for theatre, television, events and a wide range of other precision lighting applications. It employs a 500W RGBMA LED engine with a brightness of 17,000 lumens and CRI of 92. It is designed for any application where exceptional colour, a wide zoom range and a soft beam are required. 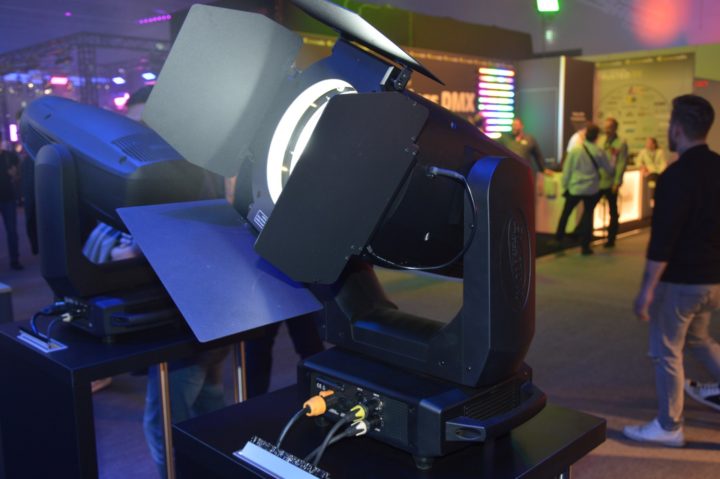 Fuze Pendant Compact: an energy-saving pendant luminaire that is ‘smart’ to fit into any environment and small enough to be suitable for a wide variety of spaces. Housing a 144W full spectrum RGBWL LED array, it produces beautiful colours and variable white tones with high CRI. Colour temperature control is between 2400 and 8500 K.
KL Profile FC: A compact ellipsoidal shaper with a 305 W RGBMA LED source designed for a wide range of precision lighting applications. With a zoom range of 7 to 50°, the luminaire requires no additional optics, reducing cost, complexity and providing excellent flexibility for any theatre or performance venue. Power output exceeds 10,000 lumens.

KL Fresnel 6 FC: a soft colour light optimised for critical and noise-sensitive locations such as theatres and in broadcasting. It is a fill light source that projects a smooth uniform stream across the entire colour spectrum, including dynamic white light. It houses a highly efficient 220 W RGBMA LED engine and produces up to 8000 lumens with a motorised zoom from 10° to 32°.

Adam Hall is present at ProLight+Sound with two stands dedicated mainly to the Cameo and LD Systems brands. 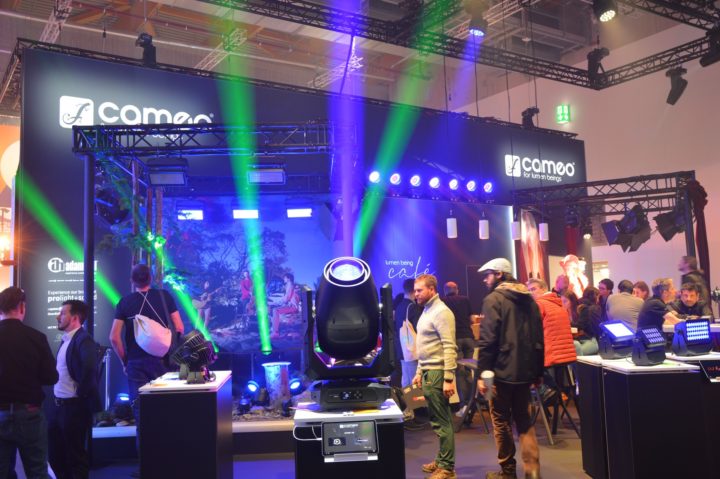 At the Cameo stand we were able to appreciate the new OTOS® H5, which is aimed directly at those who need a complete and efficient hybrid beam spot wash moving head. In addition to use in large venues, the OTOS® H5 with its high light output (19,000 lm) and IP65 certification is particularly recommended in outdoor areas, such as outdoor concerts and festivals. The extremely flexible 3-in-1 projector combines powerful light output and effects with a low weight of only 33 kg, making the OTOS® H5 currently the lightest product in its performance class.

Also new is the P2 series, Cameo’s first profiles for the professional theatre, TV and event sector. The series includes projectors with LED sources in Tungsten, Daylight and Full-Color (RGBAL) versions, with extremely high CRI (96) and TLCI values for true-to-life colour rendering. With a light output of 15,000 lm, the P2 models are perfect for replacing traditional 1kW luminaires. In addition to their selectable pulse width modulation (up to 25 kHz) for flicker-free operation, the profiles with RDM can be flexibly adjusted remotely in beam angle (15-50°) via optional interchangeable lenses. 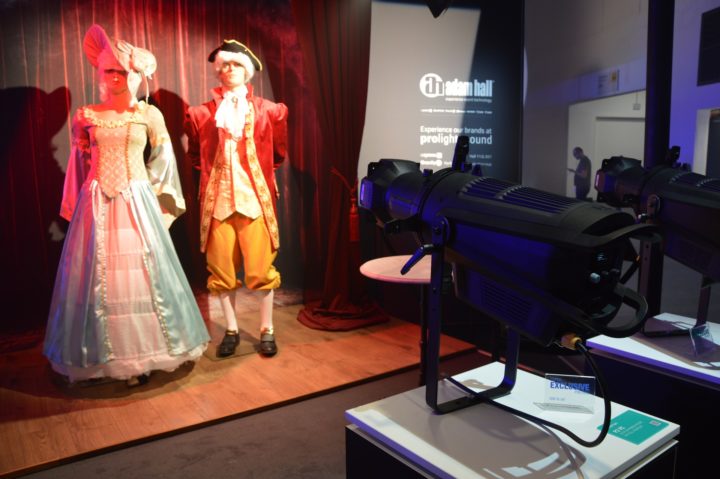 The new Cameo LUXIS FC features a 200 watt RGBALC 6-in-1 COB LED, which offers excellent colour rendering (CRI > 92) combined with high light output (7750 lm) and is suitable for the rental market and for use in theatres and exhibition centres. 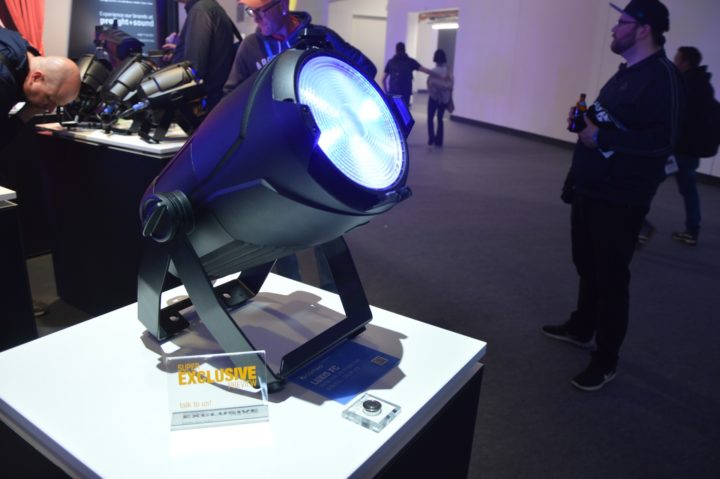 At Prolight + Sound, Cameo presents for the first time the new STUDIO PAR series, with the models STUDIO PAR 4 G2, STUDIO PAR 6 G2 and STUDIO PAR TW G2. This is an all-round versatile LED PAR with integrated mixing of all colours, available in colour, amber and UV light or tunable white. The Impression X5 is a ‘next generation LED wash light’ – a new fixture that brings all the benefits of the iconic X4 series with cutting edge technology and new features in a weight of just 13.3 kg. It starts with 19 x 40 watt RGBL LEDs that provide incredible light output and an extended colour gamut, GLP’s new iQ.Gamut colour algorithm that ensures a clean 6,500 K white point with high colour rendering (CRI 90 / TLCI 90), plus the ability to switch to other precisely calibrated colour temperatures. 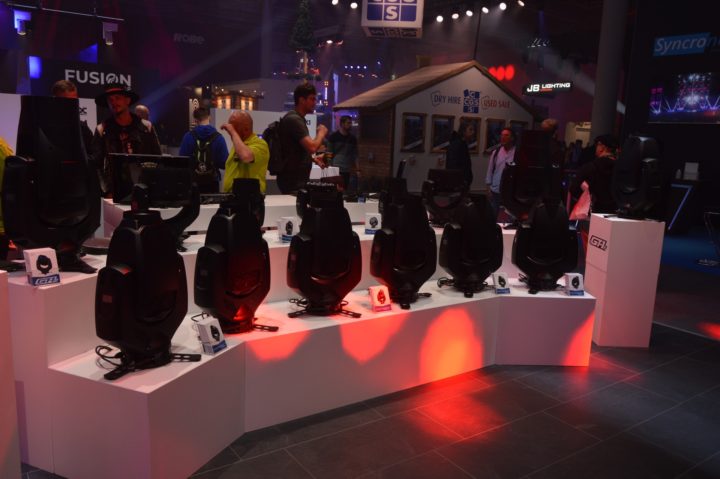 The XDC1 IP Hybrid combines the impressive features of a wash fixture with the powerful colours of the X5 impression. The unique optics allow for a narrow beam angle of 9°, with two extremely bright strobe lines borrowed from the JDC1, all in an IP65 certified housing. The AQA XDC1 IP Hybrid can be aligned horizontally and vertically and combined with other units to create seamless columns or lines. 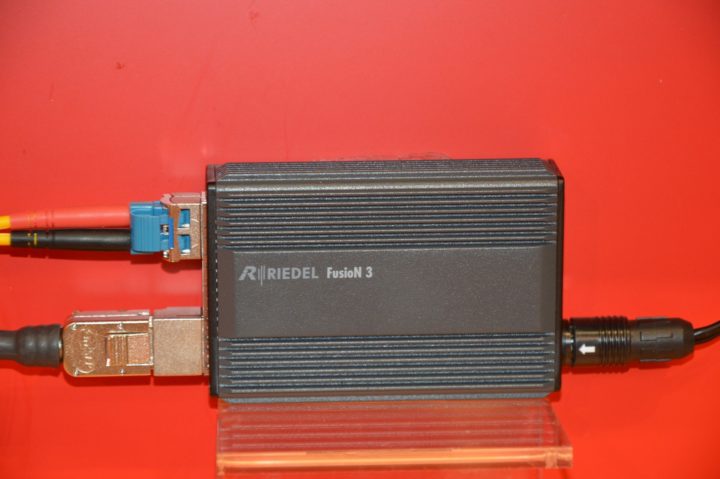