Celebrating some superlative Scandinavian rock music, fans across the USA reveled in a recent high-powered double headliner tour delivered with passion and style by acclaimed artists Ghost from Sweden and Volbeat from Denmark. 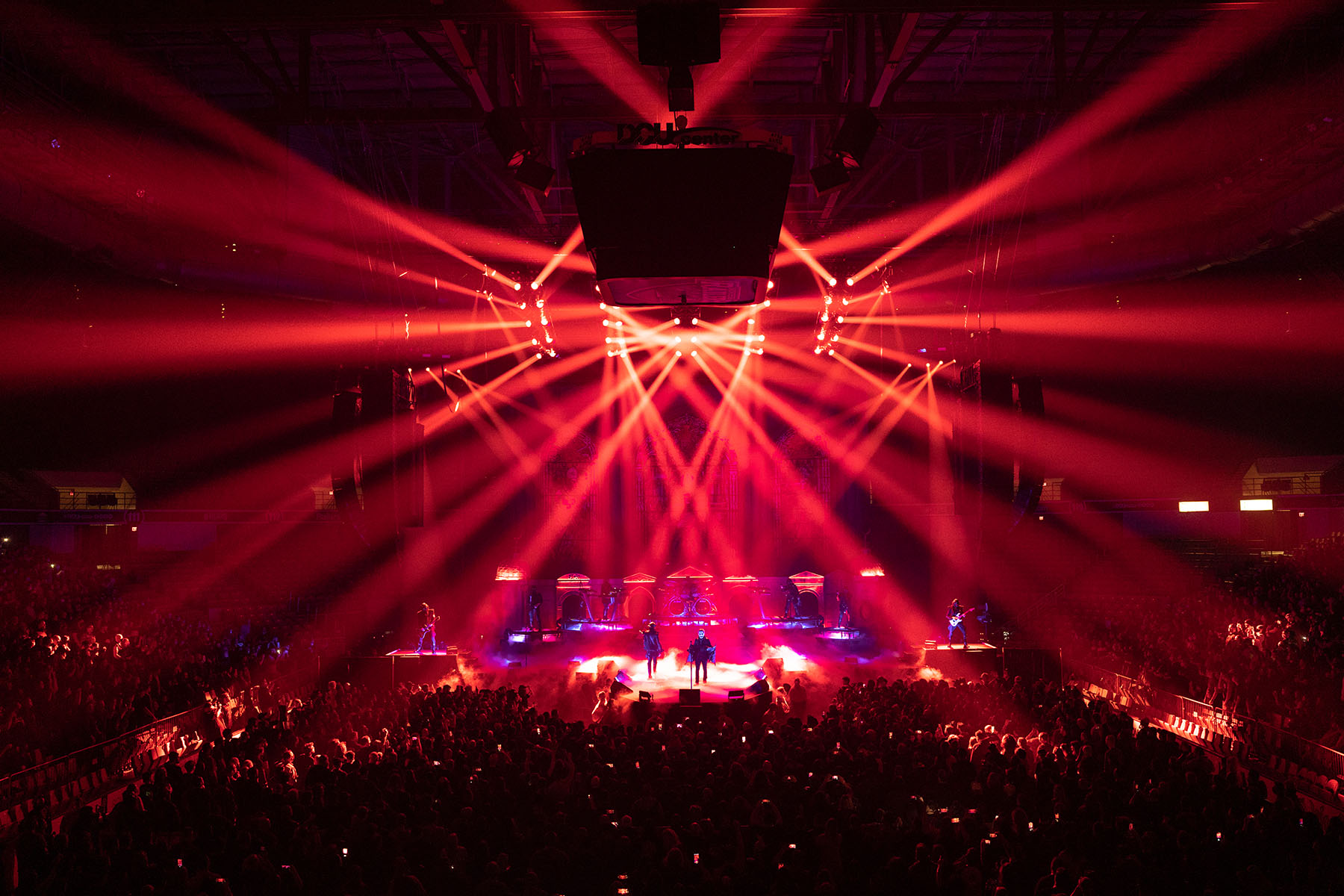 This tour also united the imaginations of two different but equally talented international lighting designers – Niels ‘Niller’ Bjerregaard for Volbeat who is based in Denmark and Erich Bertti from Brazil, LD for Ghost – who combined creativity and lateral thinking to design a top rig that would work for both bands but yield totally contrasting results!

Robe moving lights – MegaPointes, Spiiders and BMFL Spots – were the primary moving lights of choice for this challenging task, all supplied by Premier Global Productions out of Nashville.

The pressure was on for both designers to create completely unique shows for their respective bands using this shared lighting system plus their own individual floor packages.

For practical and technical reasons, Volbeat played first, thrilling the audiences with their futuristic-looking set and high energy video visuals which were matched and paired perfectly with a non-stop barrage of complementary lighting looks and cues.

Ghost then took to the stage, and blasted through a potent, highly theatrical and action-packed performance, rammed with lighting drama, changing back-cloths and epic presence.

While the contrast could not have been starker, the two designers fully embraced working together, and from the first discussions six months out, they were both equally decided on one thing – they wanted Robe on the rig! 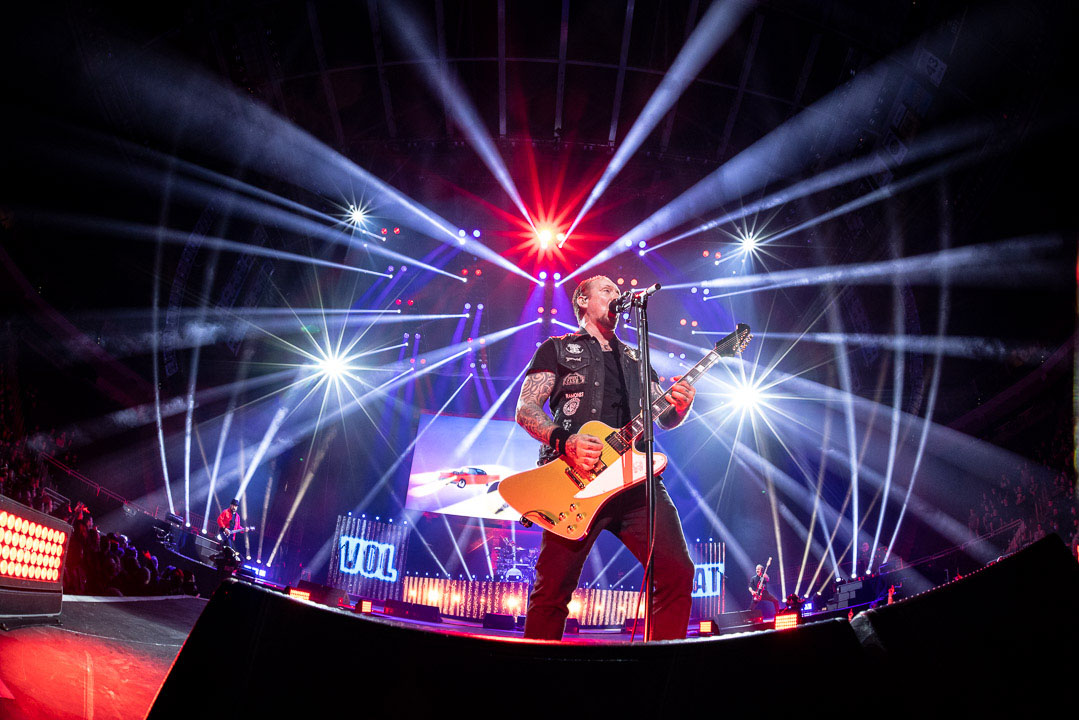 Niller has been working with Volbeat for 13 years and with new album Servant of the Mind just released, like everyone, they were ready to rock post-pandemic!

With that history in mind, he knows exactly where – and where not – to put lights, so he and Erich, together with Niller’s co-show designer Guy Sykes, went through about four interactions of the overhead design before they agreed on a model that worked well for both. Guy is also Volbeat’s TM, he has toured with groove metal legends Pantera – among others – in the past, and is one of Niller’s mentors.

“Erich and I had both utilized Robe a lot,” he stated. “The fixtures are reliable and feature-packed, the brand is big in the USA with the lights widely available, so that part of the decision-making process was very easy!”

The idea was to have a universal MegaPointe look in the roof rig that would give those unrelenting BIG epic rock looks that set the tone for both artists. “MegaPointes are one of the few fixtures versatile enough to be able to provide a completely different set looks for the two shows,” he confirmed. 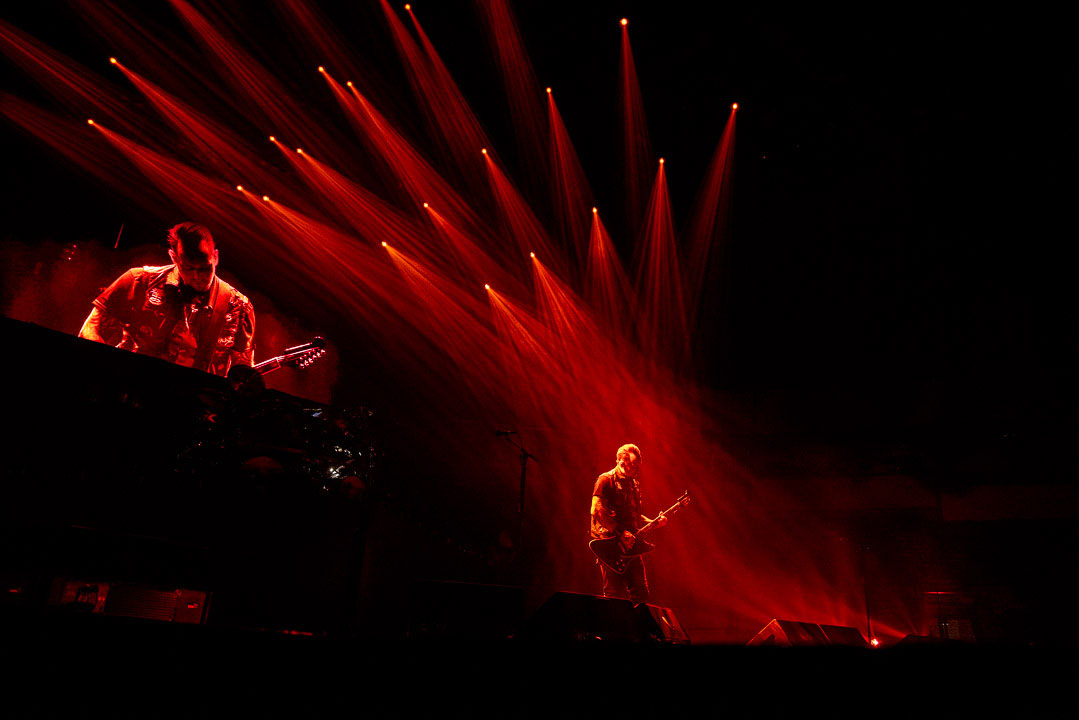 The 30 x MegaPointes and 50 x Spiiders were distributed over five slightly raked upstage / downstage orientated truss sections, each rigged with six carefully positioned MegaPointes which had the effect of making the rig look extremely large.

The Spiiders were dotted in between and around these, and this carefully calculated placement created the depth and dimension essential to fashioning the video visuality of Volbeat’s show, together with the brightness of both fixture types they needed to slice through the lumens!

The Spiiders were picked both because they are an “awesome LED wash fixture” and because of their flower and pixel ‘flow’ effects which he used extensively, “it allows us to ‘gobo’ out the whole rig with both sets of fixtures which is a great contrast effect in itself”.

Niller appreciates having these extra layers of Spiider effects ‘up the sleeve’ which helps keep the visual surprises rolling throughout the set. “It is definitely THE best fixture in its class.”

The 16 x BMFL WashBeams were supplied with separate cameras to work with the four RoboSpot systems, with the luminaires rigged in banks of four. Eight – four a side – were on downstage trusses in ideal side positions for neat and close following, non-classical follow spot style, and another four-and-four were rigged on two offstage trusses just downstage of the back wall and the ends of the five ‘finger’ trusses.

Having 16 follow spots was a great asset to the production and they enabled some spectacular back lighting looks, including when the band moved onto the large thrust emanating from the front of stage, all of which worked brilliantly for the camera / video aesthetic that Niller had crafted.

The four RoboSpot BaseStations and their operators were located wherever they best fitted in each venue, usually somewhere behind the stage, and all they had to do was focus on pointing the lights on the relevant band members as all the parameters were running through Niller’s main ChamSys MQ500M console. 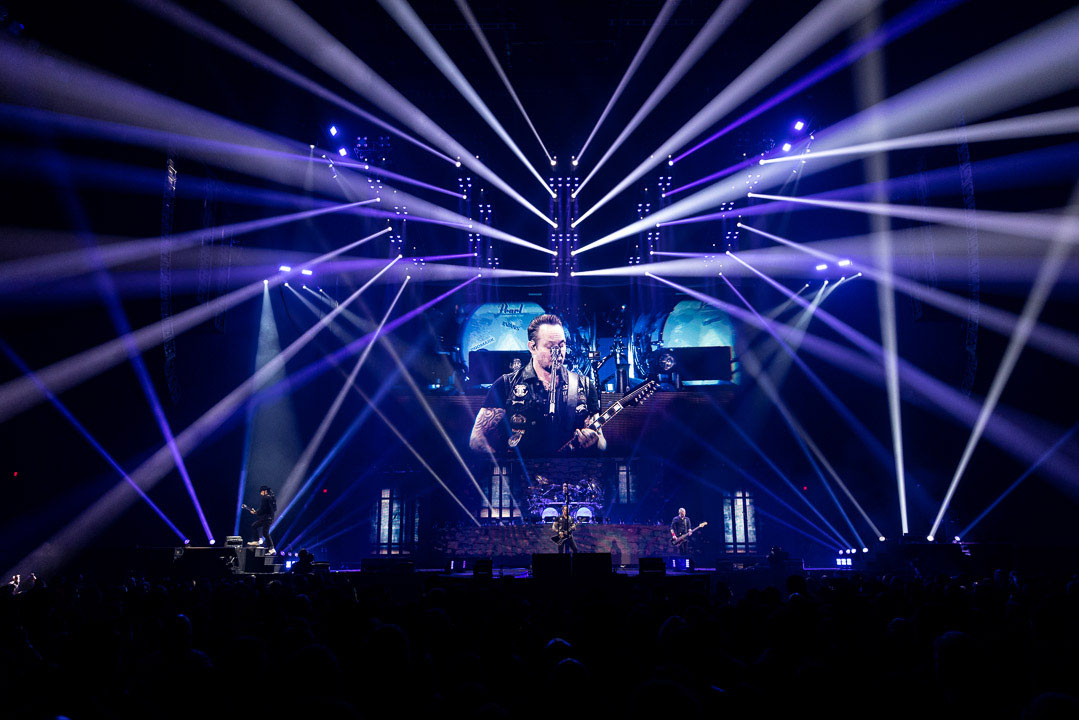 All the lighting and video cues were meticulously planned together.

“RoboSpot is convenient, versatile and allows you to be in full control, and it’s all about where the lights are and what they are doing that produces the impact.” It is something that Niller definitely likes to have under his control during a show!

There were no front lights at all apart from four conventional follow spots located out in the venues, and Niller informs us that these will be dropped for the band’s own headlining summer tour in Europe … and replaced with RoboSpots.

He worked closely on the show design with the video content creation team including – Qprime, Katja Forup, Alex Spear and Karsten Sand as well as live camera director Shelby Cude who cut the mix with feeds from five operated cameras, four remotes plus three lipstick devices around the drums. The show’s video director was Jean Luc Williams.

Their main onstage video screen was 17 meters wide by 7 meters high, built from Roe CB8 and the riser fasciae were also clad with the same product. The left and right side screens were 4 meters wide by 3.5 meters high, and the video kit was supplied by LMG out of Las Vegas. TAIT built their custom riser setup.

Servant of the Mind has been enthusiastically received and its journey takes the band back to their rock roots. The music – particularly the album’s heavy metal influences – was one inspiration for Niller in imagining and developing the show. 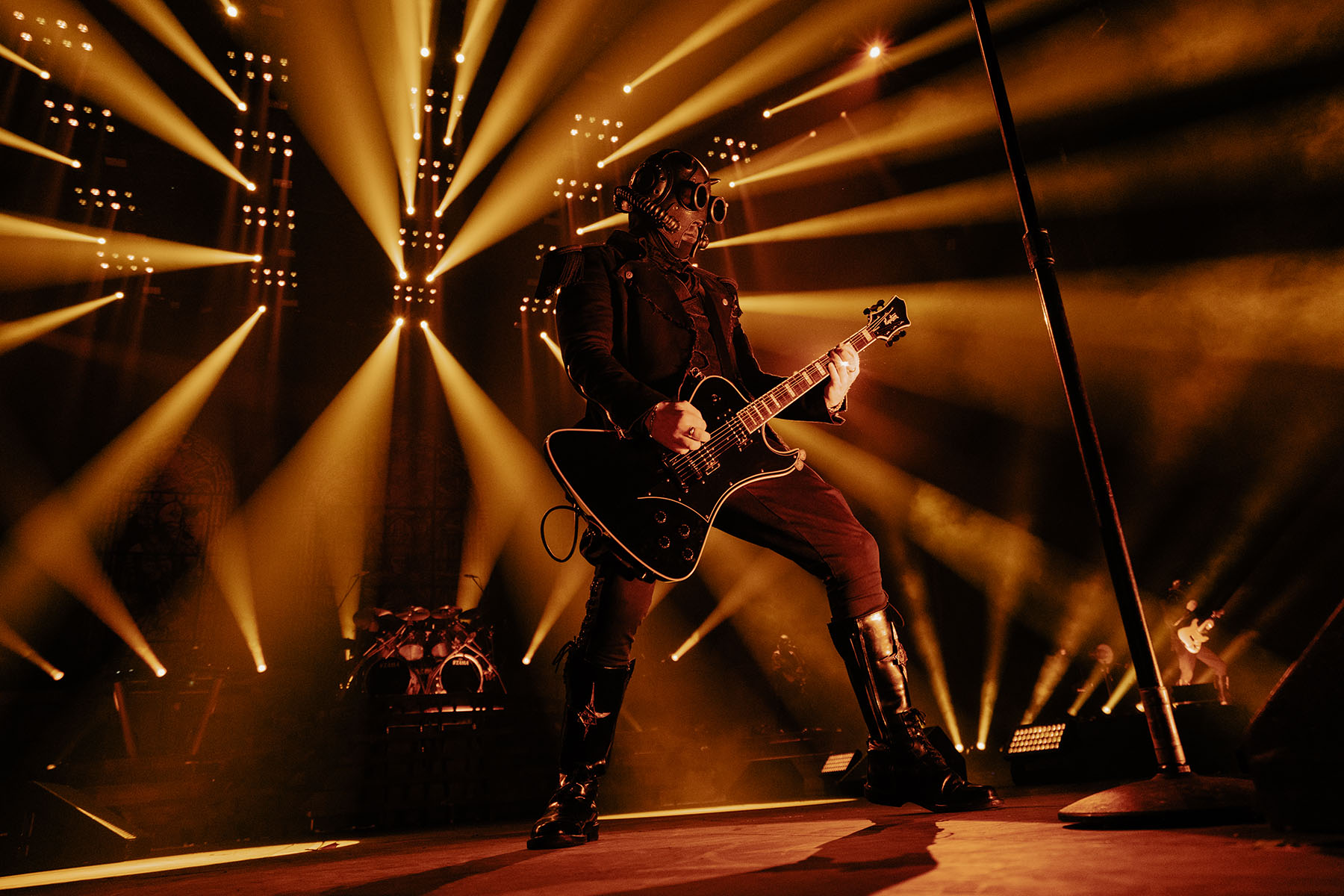 Erich Bertti is a DoP and a lighting designer / director who has been working with Ghost (Tobias Forge) since 2018, initially put forward for the ‘hot seat’ – which had consumed several of his predecessors – by production manager Eddie Rocha. Erich and Eddie had previously worked together on several other projects including the legendary Motörhead.

Erich brought a fresh new approach to the magic of lighting and established a great rapport with the artist, who is heavily involved with every aspect of his production and live show presentation.

“Tobias has very specific ideas about how things should look onstage and he’s also very tech savvy, so he knows what can and can’t be achieved with which pieces of technology, so you really need to know your stuff and respect his knowledge,” he elucidated, adding that the star was also a big fan of raw and edgy old-school rock ‘n’ roll!

Ahead of the tour, Erich received a comprehensive brief from Tobias about the style of the show and the visual treatment he was envisioning, which was the complete antithesis of Volbeat, so the tour really offered value and treated fans to two completely different full production gigs.

Niller and Erich communicated extensively about how to achieve a viable result. They were determined to get away from the festival scenario where everyone uses the same rig yet no-one really gets their show!

Into the bargain, they also really gelled and had a lot of mutual respect for each other’s work and approach.

This was the first time that Erich had used MegaPointes as a main fixture which worked brilliantly – “I really liked them – they are dynamic, durable and well-engineered.”

He also relished using the Spiiders. “I love them – another great fixture,” he commented, saying that had there been more space in the roof, he would have requested Tarrantulas!

He also made the most of the 16 x BMFL Spots of the RoboSpot systems, and he thinks that of all the various remote follow spotting systems on the market, this is the best.

His original floor package also contained a quantity of MegaPointes, but he ultimately chose 12 x BMFL Spots which were deployed around Ghost’s multiple staircase and riser set.

Changes have subsequently been made to the original set design to enhance its three dimensionality, so Erich will use MegaPointes when the tour resumes in Europe in a couple of months as a smaller fixture is now needed in these positions.

In terms of the creative operation, he – and the artist – love to play with the dark and the negative spaces on the stage. 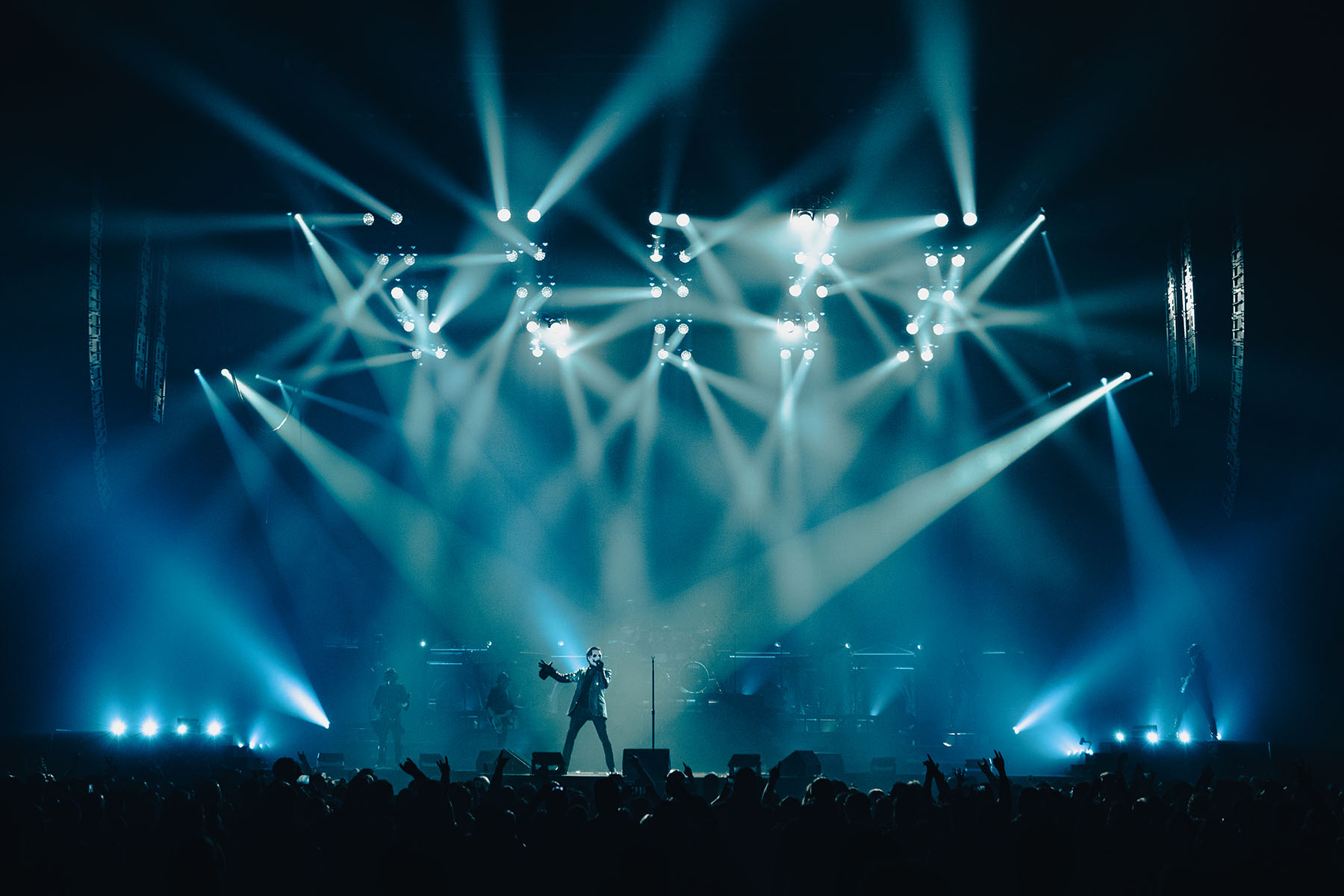 This has been one of Erich’s MOs for some time, a fascination that started early in his career in Brazil when often only limited resources were available, but he still had to ramp up the drama and experience for music fans. He learned the tricks, finesse and secrets of making fewer lights have more impact.

It was a learning curve that has been a massive advantage as his career has developed, grown, and gone international. Those basic principles of ‘less is more’ and the sheer power of darkness can be used to create beautiful and meaningful illumination no matter how large or small the rig.

Especially when you are working with fixtures like MegaPointes and Spiiders!

As with Niller, also important to Erich was not to over-use fixtures and keep something back for the final moments of the set, pulling another surprise WOW visual moment out of the hat which might be something spectacular utilizing the whole rig or a look as simple as lighting the artist with a single luminaire!

The tour was a huge success for everyone involved, everyone enjoyed great synergy and camaraderie and the very essence of being back on the road and playing live shows, and both Volbeat and Ghost will play their own headliner tours in Europe this summer.