The global launch of GLP’s highly anticipated impression X5 washlight is occupying one of the most unique stages in American TV history this spring, with the launch of the eight-part American Song Contest (ASC), airing on NBC. 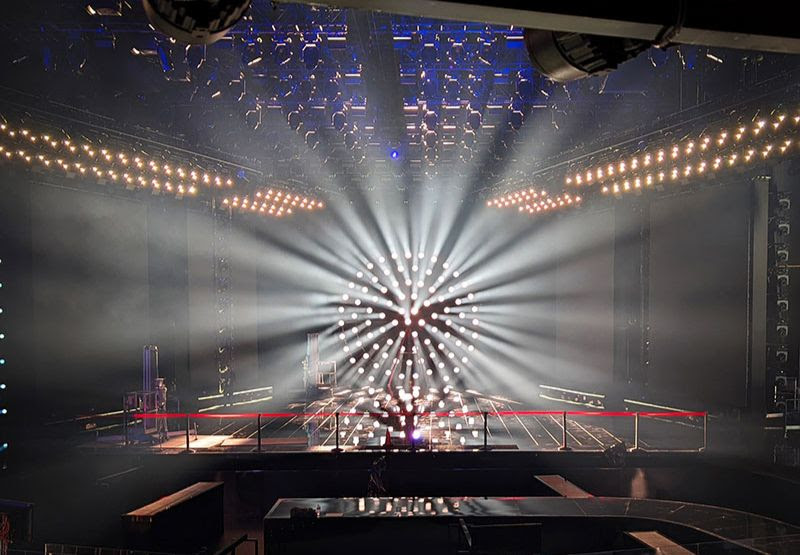 Based on the EBU-organised Eurovision Song Contest (ESC), which has been running for 65 years, and is the longest-running annual international televised music competition, ASC is operating in a different format. Some 56 states and territories submit a song over the course of the series, leading up to the final on 9 May, where they will compete to win the vote for the best original song. The show includes solo artists, duos, DJs and bands from a variety of styles and genres, both well-known and up-and-coming, and is co-hosted by Kelly Clarkson and Snoop Dogg.

The television rights have been bought by NBC and the team that brokered the licensing deal, including ESC’s long serving technical director Ola Melzig, have been named as executive producers (working alongside overall production company Propagate). Julio Himede is production designer, with lighting design by long-time GLP advocate and televised live event specialist Full Flood, spearheaded by designer Noah Mitz. The event is being shot across two vast sound stages at the Universal Studios lot in Los Angeles.

One aspect ESC has been famed for over the years has been the showcasing of new technology on its expansive sets. ASC was determined to follow that tradition and this year it was the new impression X5 that took pride of place.

“We were honored to be approached to design the American debut of the show,” states Full Flood lighting designer Noah Mitz. “We have followed the European event for ages as all entertainment lighting designers do. They asked if we would join the production and laid down the gauntlet and said they wanted an arena-scale show.”

Describing the scenography as “a forced-perspective set, like a road trip through America with a giant sculpture at the end”, he could immediately foresee this giant, sun-like structure, set upstage centre, being populated with over 90 of GLP’s new X5… if they were available in time. “So we immediately contacted [GLP Inc president] Mark Ravenhill to ask the status of the new X5.” Ravenhill rushed to get prototypes of the new washlight, which incorporates 19 ultra-powerful and exclusive 40W LEDs, ready in time, and to ensure that production could meet the timeline by delivering the full complement via GLP partner Volt Lites. Other lighting was supplied by PRG.

“Julio [Himede] had produced some early conceptual designs and dreamed up the lighting sculpture [the custom steel fabricated by Scenic Express] and at that point we made the decision to populate it with all 90 X5s,” says Mitz.

Dan Norman of Evolve Lights joined the project to consult on the design of the sun sculpture and “helped ensure that our centerpiece had the various layers and could live up to the necessary multifunctionality as required by the show.”

A field of circular washlights was always in the design plan. “We wanted the power you could only get with larger wash fixtures, and we wanted pixel control of each cell – with all the features we needed to be contained in one washlight,” explains Norman. “So it was an easy decision to make.”

The light source at the heart of the impression X5 was developed specifically to offer an expanded and more comprehensive colour gamut. Incorporating a brand-new algorithm called iQ.Gamut, the impression X5 is able to deliver accuracy, quality and consistency, with white points calibrated perfectly to the black body line, while the expanded gamut can be accessed via three different colour control modes.

“The colour gamut was extremely important,” Noah Mitz admits. “We are always looking for a delicate pastel range and saturates. Being able to make a tight beam was also key … getting a narrow zoom [from the wide 1:16 range, running from a 3.5° to 60° range] and we are using this in various configurations.

“We are running it in individual pixel mode as well as a traditional light source. We did a longer pre-viz than usual, to make sure we got it right, and GLP supported us.”

Summarising, he says: “It’s not hyperbole to say that this has exceeded our expectations – it’s a huge piece of impressive lighting scenery and marks the start of a new era.”

Full Flood lighting director Will Gossett agrees. “Looking at elements of the show it’s rare to get such a reaction from members of the production team when they saw it; their reaction was unique,” he explains.

Another member of the Full Flood consortium to give the new impression X5 the thumbs up was Patrick Brazil, who has programming duties along with Rob Koenig and Darien Koop. He says: “The X5 looks great flooded out as eye candy, but when zoomed in it is one of the brightest and tightest beams I have seen from a wash fixture. That, combined with the pixel mapping and fast zoom, has allowed us to get lots of dynamic looks out of a single fixture type.”

But the X5 was only the start of the GLP inventory deployment, which included multiples of JDC and JDC Line hybrid strobes, as well as more than 100 atoms and X4 Bars.

The Full Flood team was particularly impressed with the JDC Line, opting to edge the perimeter of the vast sunwheel with some 46 elements of the recently introduced JDC Line 500, which combines a powerful strobe line with an LED pixel mapping stick; these have since been topped up with the longer JDC Line 1000. 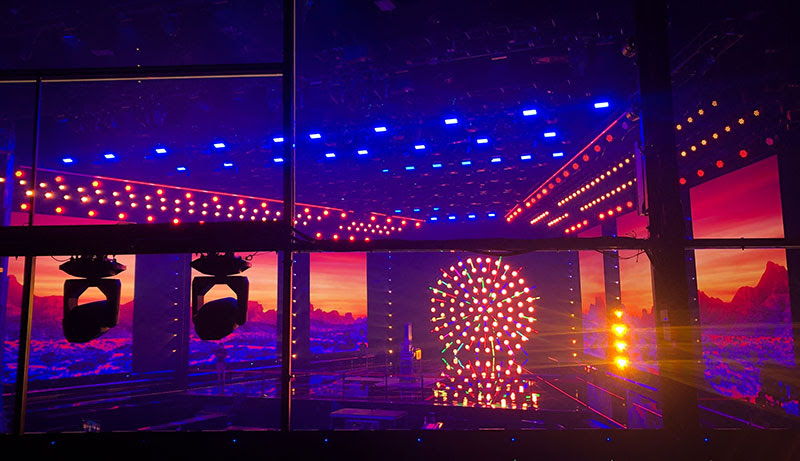 The Full Flood team had previously only experienced this fixture briefly – on a single performance of America’s Got Talent. “This is the first time we have had a big display, with 46 on the sun, as well as 130 JDC1 hybrid strobes,” states Mitz.

“Having used them once we now find they tick every box, and we will use them on all our shows. It’s great to have a linear product that is so skinny … we definitely didn’t want a fatter face strobe. And because all the elements – the colour and the white strobe – are set behind the acrylic it reads beautifully to camera.”

The other aspect of the GLP pieces that made them so specifiable was their sheer versatility. “With 56 individual and unique performances from 56 territories there’s a need for variety with the stage set. So that drove a lot of the designs.”

Finally, Noah Mitz said that all the creative teams had meshed superbly. “We’ve enjoyed great collaborations. Everyone wants it to be a new experience and the fact [the producers] were willing to invest in new technologies bears that out.”