A musical epic that defies categorization, David Byrne’s American Utopia has earned acclaim as a Grammy-nominated record album, a sellout concert tour, an HBO film directed by Spike Lee, and finally as a Tony Award-winning Broadway production in a split run. The first engagement, at the intimate Hudson Theatre, ended its performances in February 2020 and a second run at the larger St. James Theatre opened in September 2021. For both productions, Meyer Sound LEOPARD® line array loudspeakers were selected to anchor the main audio systems. 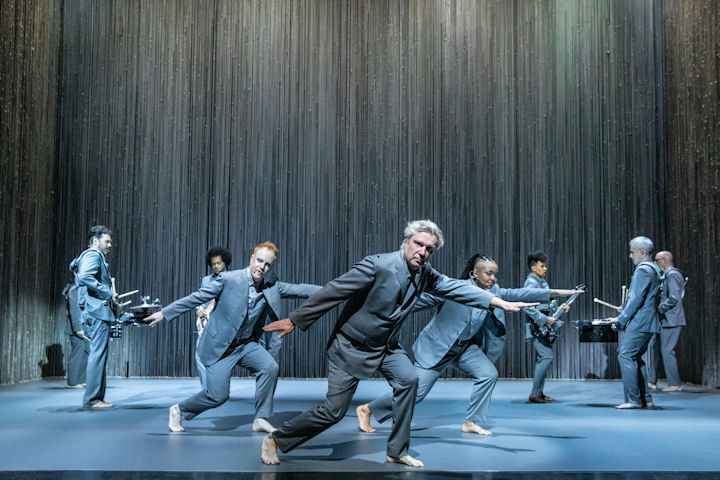 Visually and aurally, American Utopia is atypical of Broadway. There is no set, and for music there is no isolated “pit” band relying on click tracks and pre-records. Instead, all music is played live on the stage by an ensemble (including Byrne) of 12 musicians/vocalists, with six on percussion and all 12 on vocal mics. Everybody is completely mobile using wireless connectivity, allowing for a freeform choreography that blends the fluid movements of Brazilian percussion ensembles with the disciplined formations of American marching bands.

Managing the mix on this shifting mosaic of sounds is Pete Keppler, a veteran FOH engineer who came on board prior to the tour and mixed the shows at outdoor festivals and in venues clustered in the 3,000 to 5,000-seat range. When American Utopia transitioned to the 970-seat Hudson Theatre, Keppler sought a loudspeaker system scaled to a new set of demands.

“There was essentially no room beside the proscenium, and the creative team was adamant that the arrays stay out of sight lines,” says Keppler, who took on the dual role of sound designer and production sound mixer. “I needed a powerful system suited to rock levels but with a slender profile. I consulted with the crew at Sound Associates, and they recommended LEOPARD. I had heard LEOPARDs before as delays and in some smaller tour venues, and I liked them. I immediately agreed.”

The main hangs at the Hudson were relatively straightforward, with left and right arrays of 12 LEOPARD line array loudspeakers. “That was far more power than I needed, but I needed the array height to cover the vertical,” says Keppler.

The follow-up production at the 1,710-seat St. James Theatre was more complicated as the location of box seats required a split array configuration, with six LEOPARD loudspeakers on the lower hang and eight on the upper. Six LEOPARD loudspeakers were set three per side as infills, with ten more as balcony delays. Eight 900-LFC™ low-frequency control elements fill out deep bass, while five UPJ-1P™ and 11 UPJunior loudspeakers were deployed in fill and delay systems. Four Galileo Callisto processors provide system drive and optimization. 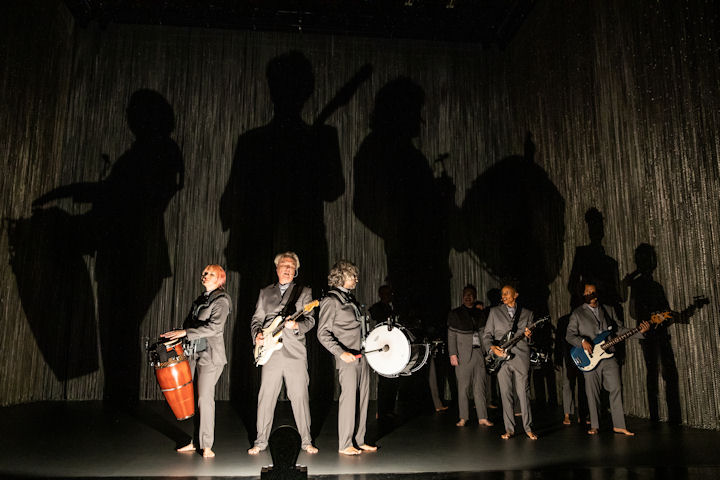 “LEOPARD is the best smaller PA I’ve ever had my hands on,” says Keppler. “What I’ve gotten out of it at both the Hudson and the St. James is absolutely wonderful, exactly what I wanted to hear. And I’m also a big fan of the 900 subs. They impress me as being very musical. I can hear the full spectrum of bass notes from keyboard, low guitar strings, and drums tuned to specific notes.”

Keppler was equally pleased with the integrated suite of design and optimization tools. “The [Meyer Sound MAPP] modeling software was great. When we set up the system, the coverage went exactly where it was supposed to be. The Galileo processors sound really good, and I love the Compass software. It’s easy, intuitive and boots up on a tablet in seconds. Domonic Sack from Sound Associates did the time alignment, showed me a couple things with it, and I just took it from there.

“I also have to give credit to Sound Associates, definitely one of the best sound companies I’ve worked with. Domonic, Peter Fitzgerald, Greg Reif, and Bob Hanlon, along with Matt and Joe Maloney, all greatly contributed to the success of this show.”

Front-end equipment for the Broadway production includes 70 channels of Shure wireless with Axient digital for microphones and PSM-1000 systems for IEMs. Keppler mixes on a DiGiCo SD10 console equipped with a Waves outboard processing package.

In its review of American Utopia, England’s influential NME stated that Byrne’s stirring epic “may just be the best live show of all time.” A critic’s pick of the New York Times, the Broadway production was praised as “dazzling, rapturous and jubilant” while Variety called it “an artistically stunning tour de force.” David Byrne’s American Utopia received a Special Tony Award in 2021. It closes at the St. James Theatre on April 3, 2022.