Four years after the release of the 4-channel Rotary Mixer TRM-402, Omnitronic is launching a new Rotary Mixer of the popular TRM series just in time for Prolight+Sound: The new TRM-422 combines all the proven and popular features of the previous models, but additionally offers functions that fans of the Rotaries had been asking for. 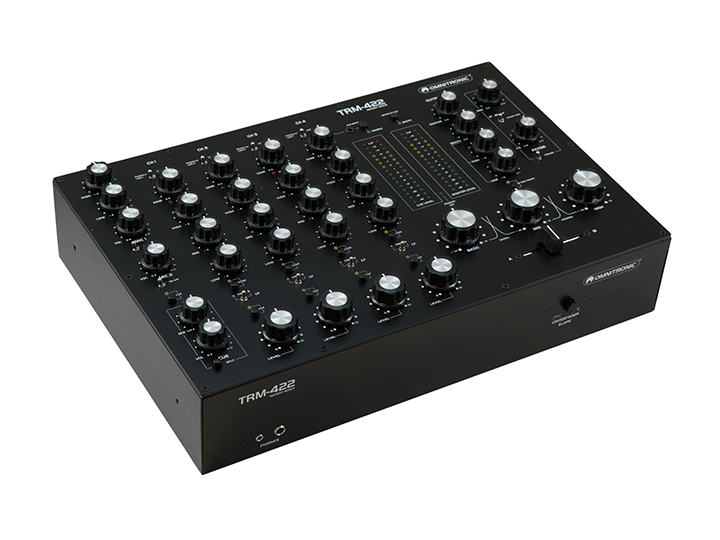 The surprise was great among fans of Rotary mixers when the first, unofficial pictures of the new TRMs appeared online in mid-February: Because even at first glance, it was clear that the new one offers more features than its predecessors. What becomes clear at second glance: During the development of the mixer, the focus was on the wishes and suggestions of the worldwide TRM community.

Thus, Omnitronic not only integrated a volume as well as a gain control in each of the four input channels in its new analog mixer. In addition to the master isolator (bass, mid & high), the DJ now has the option of activating a filter with HPF, BPF, LPF, resonance and sweep controls in each of the 4 input channels. The master output is available in an XLR and RCA version.

A very frequently requested function, which the TRM-422 now offers, is the send/return path for effects: Send/Return (RCA) now provides the option of routing the master signal out of the mixer, looping it through an external effects device, and returning it to the mixer.
The mixer’s timecode outputs now also allow easy integration of a DVS system (Traktor, Serato, etc.). But these are still not all the innovations you can expect.

With the TRM-422, Omnitronic surprises the worldwide Rotary fan community with a mixer that has been developed according to user wishes and is stylishly presented. The mixer is expected to be available in stores in May.