When Tess Minor (of Major Minor Designs) was handed her first big production design project last autumn, she wasn’t about to spurn the opportunity. 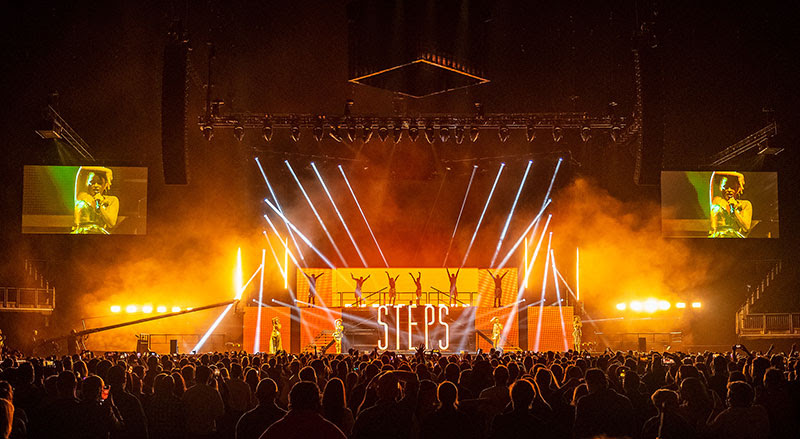 The Canadian had carried out many roles as operator/programmer – including Kylie Minogue, where she worked alongside the artist’s frontline team of Rob Sinclair and Frank Strachan – and this provided the insight into the cornucopia of lighting and video effects necessary to bring a big arena stage to life.

Tess originally started working with Christie Lites in Canada, moving from Vancouver to Toronto, where she did a four-month stint with Sixx:A.M. She then relocated to the UK where, with an Irish passport, she knew she wouldn’t need to struggle with obtaining work visas.

Over in the UK, the baton originally held by Christie Lites’ Martin Kelly in Canada was passed onto Andy Strachan at the company’s then-new Coventry base. “Christie started promoting me right away,” she says.

But it was his namesake, Frank Strachan, who had put the designer forward for the Steps role. She not only undertook the expansive stage concept for the five-piece dance-pop group – using JDC1 hybrid strobes and X4 Bar 20 battens from the GLP portfolio – but programmed the lighting and piloted the show.

She received her reward with interest at the finale O2 shows at London arena. “It was crazy: a two-hour dance party with everyone standing,” she recalls. “The crowd was so into it.” She received good support from crew chief Aidan Mccabe, dimmer tech Matt Morris, lighting tech Sam Hooper and honorary lighting tech Giulio Ligorio.

Discussing her design, she emphasises that “the X4 Bar 20s were one of the main features. As for the JDC1s, I could put them into full mode and utilise the full aspects – both the individual strobe cells and individual LED cells. It was nice to be able to generate creative effects and optical illusions.”

She says that despite having used the JDC1s previously, this had been her first opportunity to run all 24 fixtures in full mode. The fixtures – which were located on wing trusses on either side of the centrepiece video displays, with a further row on the structure’s top deck – “were elevated to create an effect that I really liked,” she exclaims.

“Initially I was concerned the LED cells might appear too ‘blocky’… too robotic. But once I sat down properly with them, I realised just how versatile they were, and much softer. I noticed their brightness and how punchy and impactful they were, and this added a huge element.”

The X4 Bar 20s were set vertically, in four towers, six in each. “We ran them in single pixel mode, and the fade and delay times created some really cool effects in framing the video towers. It has a really great zoom,” continues Minor.

In summary, Tess Minor says that both the X4 Bar 20 and JDC1 are never far from her thoughts when plotting her designs.

“These are two of the fixtures you think of first: good, reliable and still really current even though they have been around for a while,” she says. “I really enjoy working with them – they are some of my ‘go-to’ products for sure.”

Finally, she touches on the support Andy Strachan has always had for her since moving to the UK. “He’s a big fan and has been a major influence,” she admits. “There were a lot of adjustments [to the design] and he was always incredibly patient.”