Founded in 1993, The Great Orchestra of Christmas Charity was originally created as a one-off event to raise money for medical equipment, raising over $1.5m that year. Part of the WOŚP Foundation, the event has since grown to become Poland’s largest non-governmental, non-profit charity organisation, raising money for pediatric and elderly care and featuring annual ‘Grand Finale’ live events in towns and cities right across the country.

2022 saw the 30th edition of the numerous events supporting the charity and their purpose this year was the purchase of medical and diagnostics equipment for eye diseases in children. The largest single event was held in the capital, Warsaw, where sound company Gigant Letus were commissioned to deliver, install, prepare and operate the sound systems for the various events and activities.

Gigant supplied and commissioned four separate systems, covering the Finale Studio and concert tent with two more outside, used during the ‘Light To Heaven’ (a large fireworks show) and for the Warsaw WOŚP Run ‘Count Yourself With Diabetes’ (where about 4,000 people registered for the run on streets) and the ‘Virtual GOCC Run’, the finale of an app-based participatory fund-raising scheme.

Originally intended to be an open-air event on a very big stage suitable for the anniversary, due to ongoing Covid issues the decision was taken at the last minute to control access and so two large tents were erected at the foot of the Palace Of Culture And Science to house the Finale Studios and the concert venue. The change in the concert venue, originally intended to use Outline’s flagship GTO system (which was integrated into the set design), meant a switch to the smaller but still extremely potent Superfly. 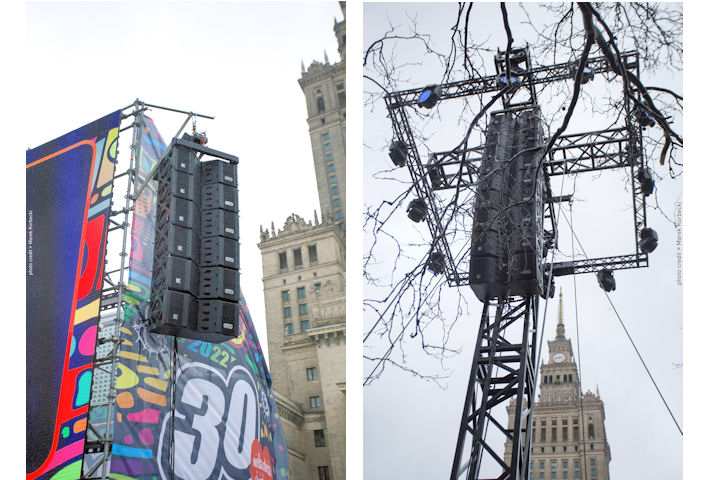 The concert tent system used two clusters of 14 Outline Superfly modules, with Mantas 28s as downfills and low-frequency support delivered by DBS 18-2 subwoofers in an end-fire configuration. A similar system using a smaller number of the same components was used in the Finale Studio, while Outline’s premium GTO line-array system featured for both the Warsaw WOŚP Run and the fireworks – in total, Gigant Letus deployed 32 GTO enclosures, 38 DBS 18-2 subwoofers, 44 Superfly modules and four Mantas 28 loudspeakers, all driven and processed by GTA Otto / Powersoft X8, K10 and K20 amplifiers.

Gigant Letus used Outline’s OpenArray 3D simulation software extensively in designing all the various systems and everything was installed and ready, even following the drastic last-minute changes, inside just two working days. The company supplied a complete package of audio equipment including DiGiCo and Yamaha mixing consoles, Shure PSM1000 IEMs and Axient Digital wireless microphones among much else.

The company’s owner Jerzy Taborowski commented, “I chose my Outline GTO and Superfly systems for this event because, like all Outline products, they combine the highest sound quality possible with an unprecedented long throw capabilities at extremely high SPL. We needed all the dynamics and headroom we could get for all four systems because Jurek Owsiak (radio and TV music editor, also the founder and chief conductor of the Great Orchestra of Christmas Charity) likes a full, powerful sound everywhere.” 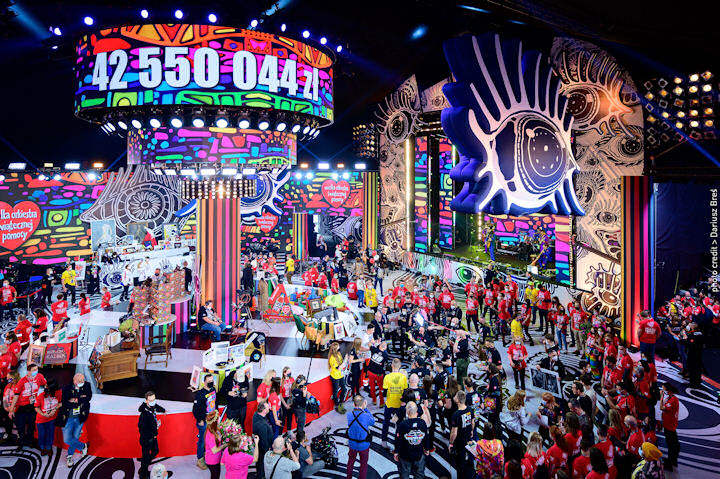 “Superfly was ideal for the music tent because although it is very compact and weighs less than 38 Kg, it can generate lots of power, especially when driven by the X8 amplifiers. Also, a pair of Superfly modules have almost the same LF / MF performance as a single GTO cabinet but when space is limited we can adjust the rigging to make it work while keeping that power – also the cardioid characteristics of the LF keep those frequencies off the stage, which is perfect for a smaller space.”