Metallica – among the most influential and legendary hardcore speed metal bands of all time – treated their fans to two epic concerts at San Francisco’s Chase Center in December, celebrating an incredible 40 years of provocative, ground-breaking music and performance. 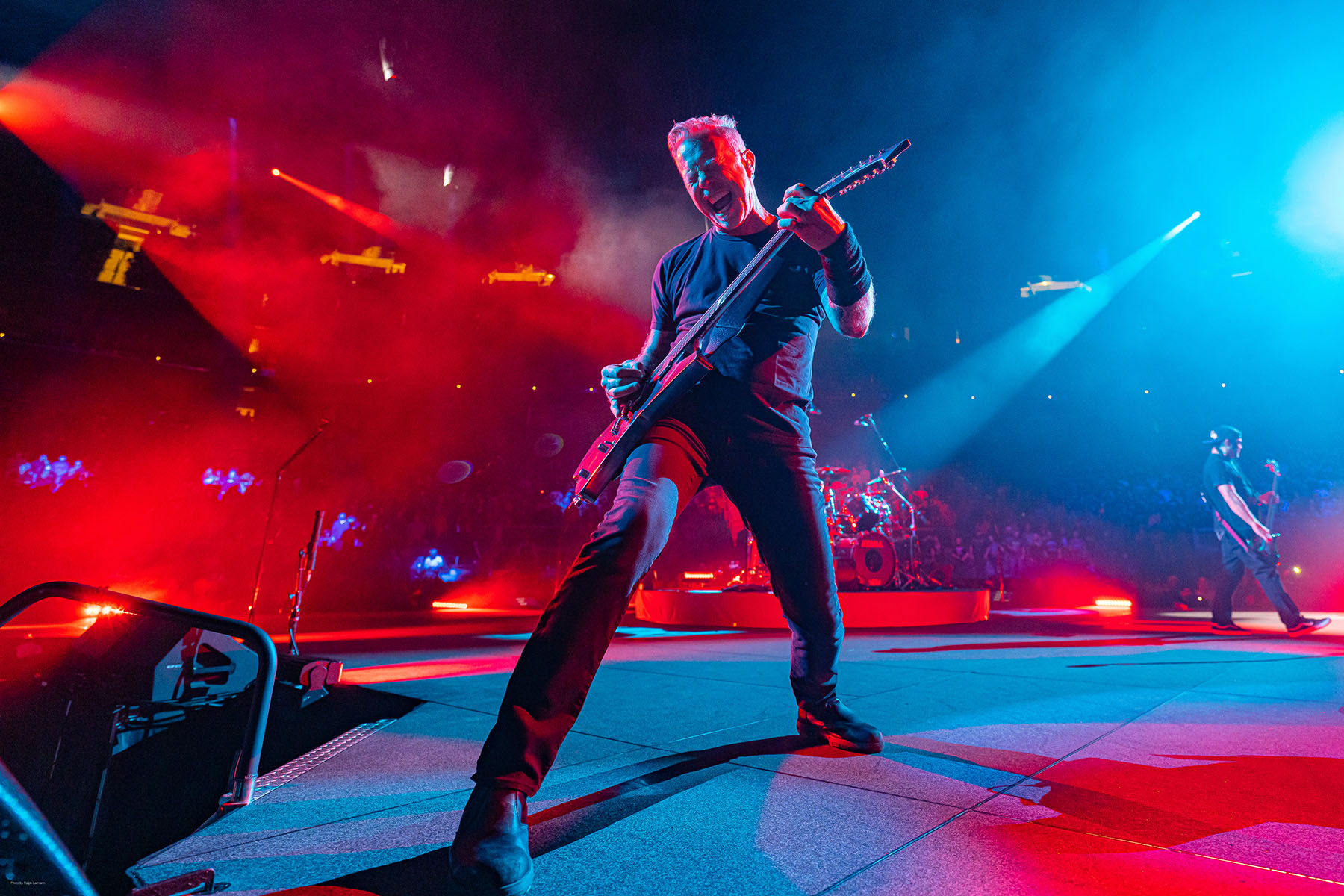 Lighting designer Rob Koenig collaborated closely with production designer Dan Braun whose stunning visual architecture – featuring 45 large multi-layered and overlapping video surfaces – set the visual tone for this unique in-the-round live retrospective. While the screens were key for showcasing playback video, interviews, artwork, and other archival material spanning the last four decades, lighting highlighted both Metallica and their audience, uniting and energizing an incredible bond that’s seen them remain at the very top of their game since the 1980s.

Needing the most powerful, dynamic, and flexible lighting solution possible for these shows, Rob and Dan chose 148 x Robe BMFL WashBeam moving lights to be the heart of the lighting rig, plus another 16 x BMFL WashBeams which were running on four RoboSpot systems.

Apart from 19 x moving LED bars, these BMFLs were the only lights on the rig from which the design team created 36 songs worth of unique, impressive jaw-dropping looks and treatments.

The first show kicked off with “Hit the Lights” and Rob did just that … enjoying the chance to push the creative boundaries of theatre, drama, and raw emotion for 16 songs that night, followed by another 16 – an incendiary mix of classics, blockbusters and coveted rarities – for the second gig.

Extra special moments included the first ever live rendition of “Fixxxer”, a darkly complex and confrontational fan favorite from 1997’s “ReLoad” album, delivered on night one. 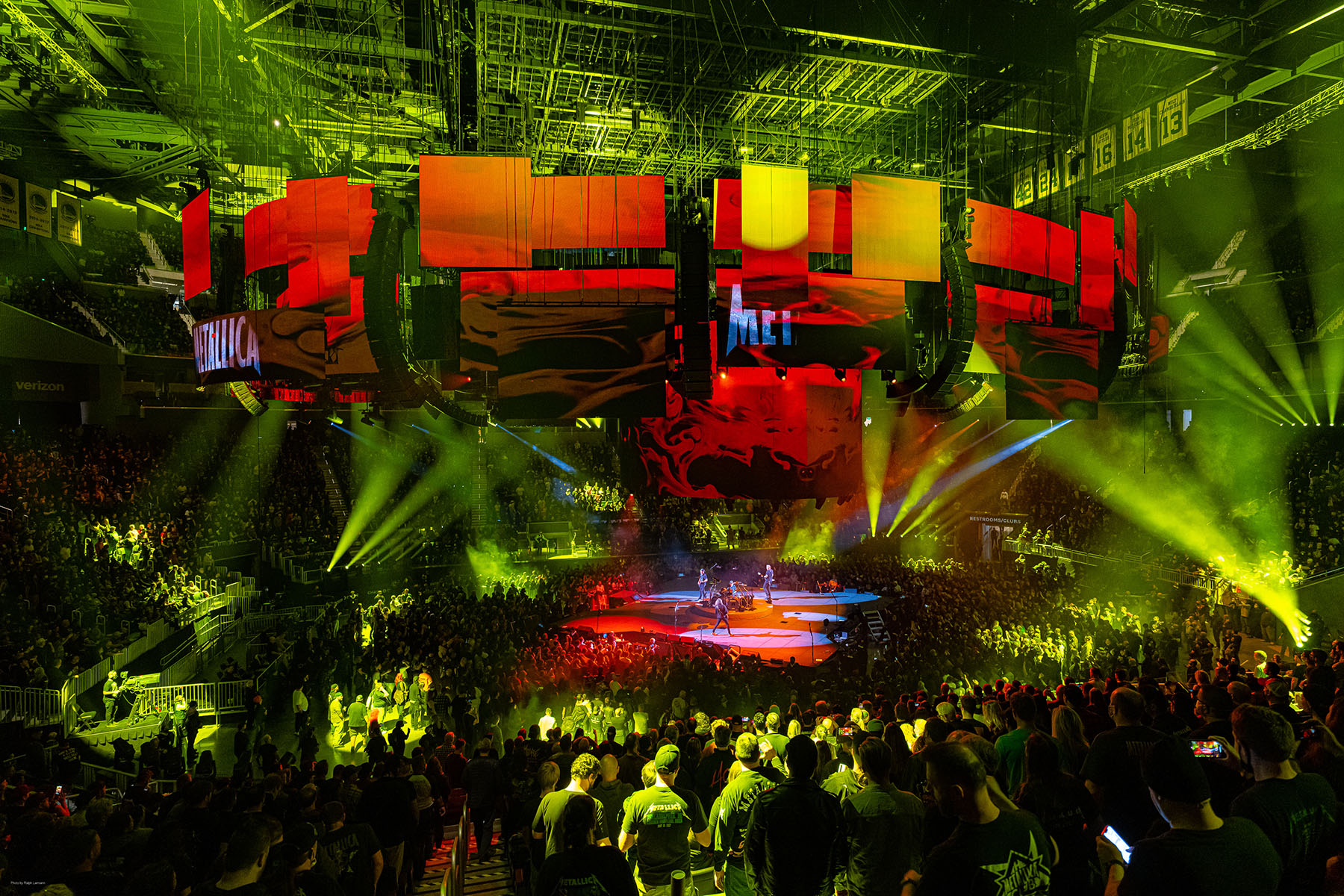 Rob and lighting programmers Joe Cabrera and Cat West prepared a pool of 36 songs. However, with no definitive setlist available ahead of the first couple of weeks of previz, and a selection of exceptional wildcards played for the first time in over 10 years, a few curve balls flew! Come showtime, Rob also found himself improvising more than once which kept him fully energized and locked into a “completely invigorating” workflow.

The starting point for the lighting design was the physical and structural layout of the video elements flown from the venue roof on a series of elegant elliptical-shaped trusses.

As the video design evolved, serious discussions also revolved around lighting placement, with Rob needing enough lights coming in at different angles and levels to hit to the stage and also illuminate the audience the entire night, without blinding them, and without touching the screens. Lighting had to both harmonize and contrast with the overall visual look.

Twenty-four BMFL WashBeams were deployed above the stage, wrapping around one of the smaller ellipses holding the central cylindrical-shaped video monolith, with another 48 on one of the larger ellipses that was also broken up by PA elements.

In the audience, three levels of strategically placed BMFL WashBeams added depth and dimension to the picture, one batch of 24 at ice (floor) level, another 24 fixtures at concourse level, with the third and highest set of 24 BMFLs flown over the audience at optimum positions for hitting the stage, a 44ft diamond-shaped construction in the center of the space.

A slightly different mindset and approach permeated this show elucidated Rob, who has worked with Metallica since 2008.
That shift was away from being fundamentally dark, brooding and menacing, and while no less intense than standard Metallica shows, there was also an air of celebration. 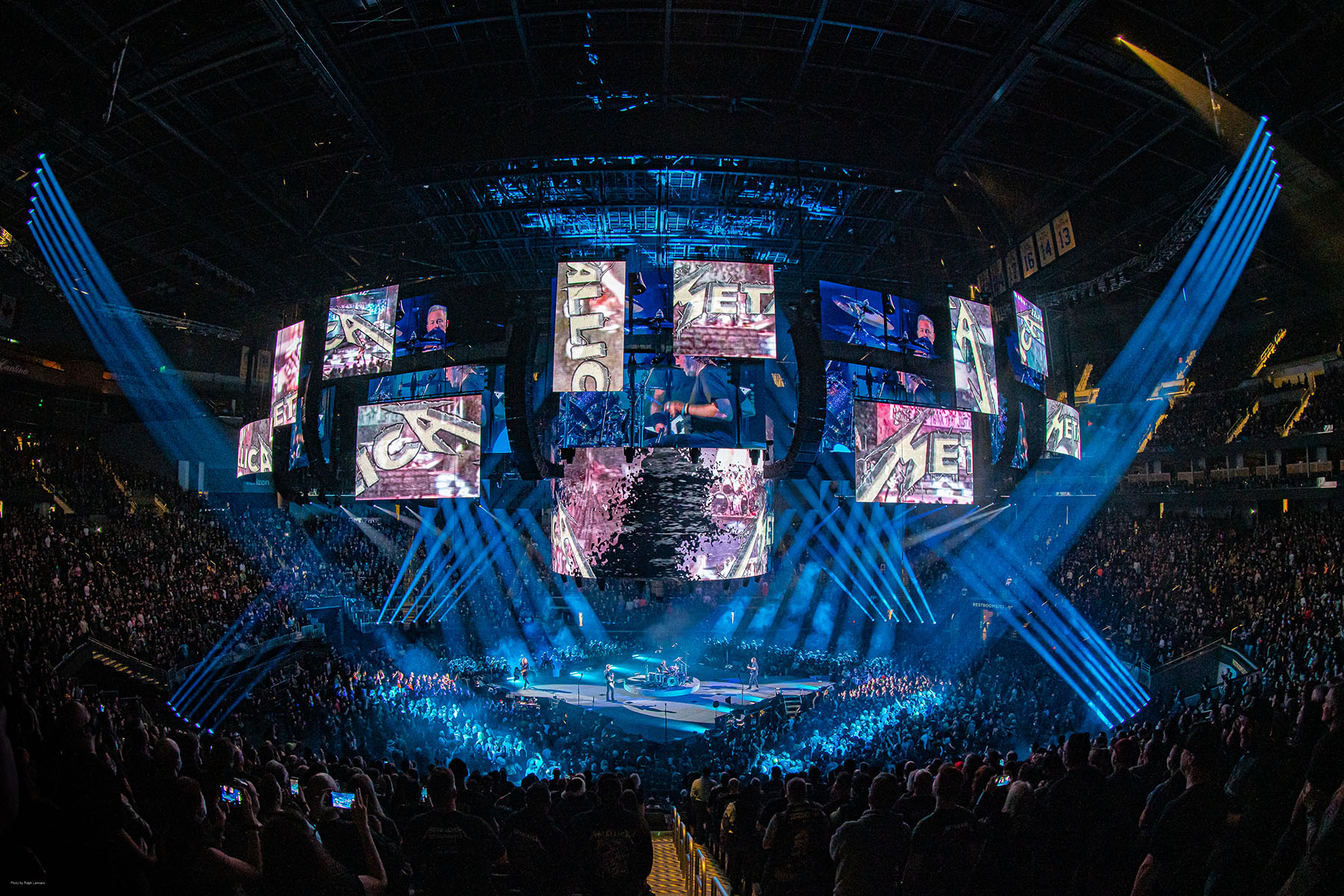 “Being a 40-year landmark, that vibe was embraced in the lighting but all the time retaining vital Metallica intricacies and characteristics,” he explained. Rob, Dan, and live video director Gene McAuliffe all collaborated closely on crafting this almost metaphysical aesthetic.

The songs were delivered chronologically from the oldest first on the first night and in the reverse order for the second which offered further chances for spontaneity, keeping all on their toes which was “way, way more fun!” declared Rob. “I loved it – so far from the norm of knowing what might happen next!”

They used “every possible BMFL trick – and that’s A LOT” to keep the energy and vibrance pumping.

The BMFL WashBeam has been a Metallica ‘anchor’ fixture for some years now, after Rob initially fell for it on Guns ‘n’ Roses 2016 “Not In This Lifetime” reunion tour. He describes the maverick luminaire as “still my best choice today for high power and huge versatility”.

Follow spotting is critical to lighting an in-the-round show effectively. The format is favored by the band for getting them closest to their fans, and while it is always more challenging for productions, the results of in-the-round are always worth the additional creative and technical efforts.

The 16 x BMFL WashBeam Follow Spots were positioned along the larger ellipses, spread out to take advantage of some of the negative space up in the roof as well as for beam separation and depth, with four units tracking each band member.

Apart from the continuity and perfect color matching, with the BMFL WashBeams on the rig Rob could control all the main follow spot parameters – color, intensity, iris, etc. – from his grandMA2 console, allowing the operators – positioned on the venue catwalks amidst all the PD and processing – to concentrate on following the band. 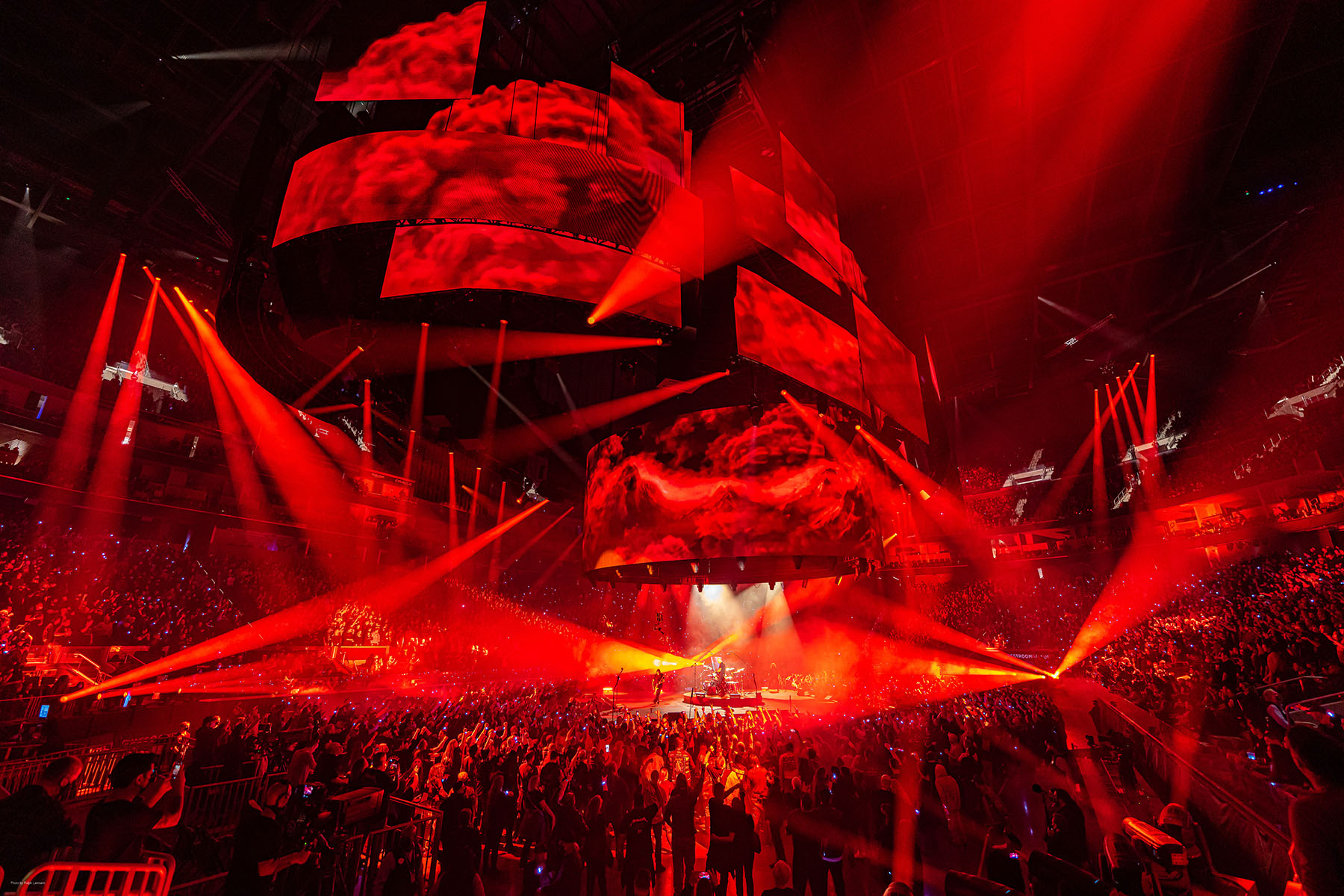 The RoboSpot focus tracking control was extremely helpful when the band moved around the stage as the follow spot beam sizes could remain proportionate.

Gaffer David Hunkins looked after setting up and balancing the spots. Rob was delighted to have him on the team, and “he completely embraced me breaking rules to make things absolutely pop on camera,” which was also crucial as the show was streamed live and recorded via a 21-camera shoot.

Metallica has a long history of playing large one-offs defined by a highly talented technical and creative production operation and a crew with enormous passion and commitment to making this a signature art.

Specific lighting challenges for these two 40th shows included programming. Even songs that had been lit hundreds of times previously had to look fresh, new, and diverse, while context needed adding to those rarely played. All this took time and energy and a fair few imaginative risks, whilst also giving Rob the chance to explore and push out of his comfort zone.

The load in was galvanizing as the kit needed to be spread out everywhere across the venue, and while they did have four days in which to do it, all of that was needed and used productively and efficiently. Video was rigged first as lighting waited patiently until the screens were all flown into place. 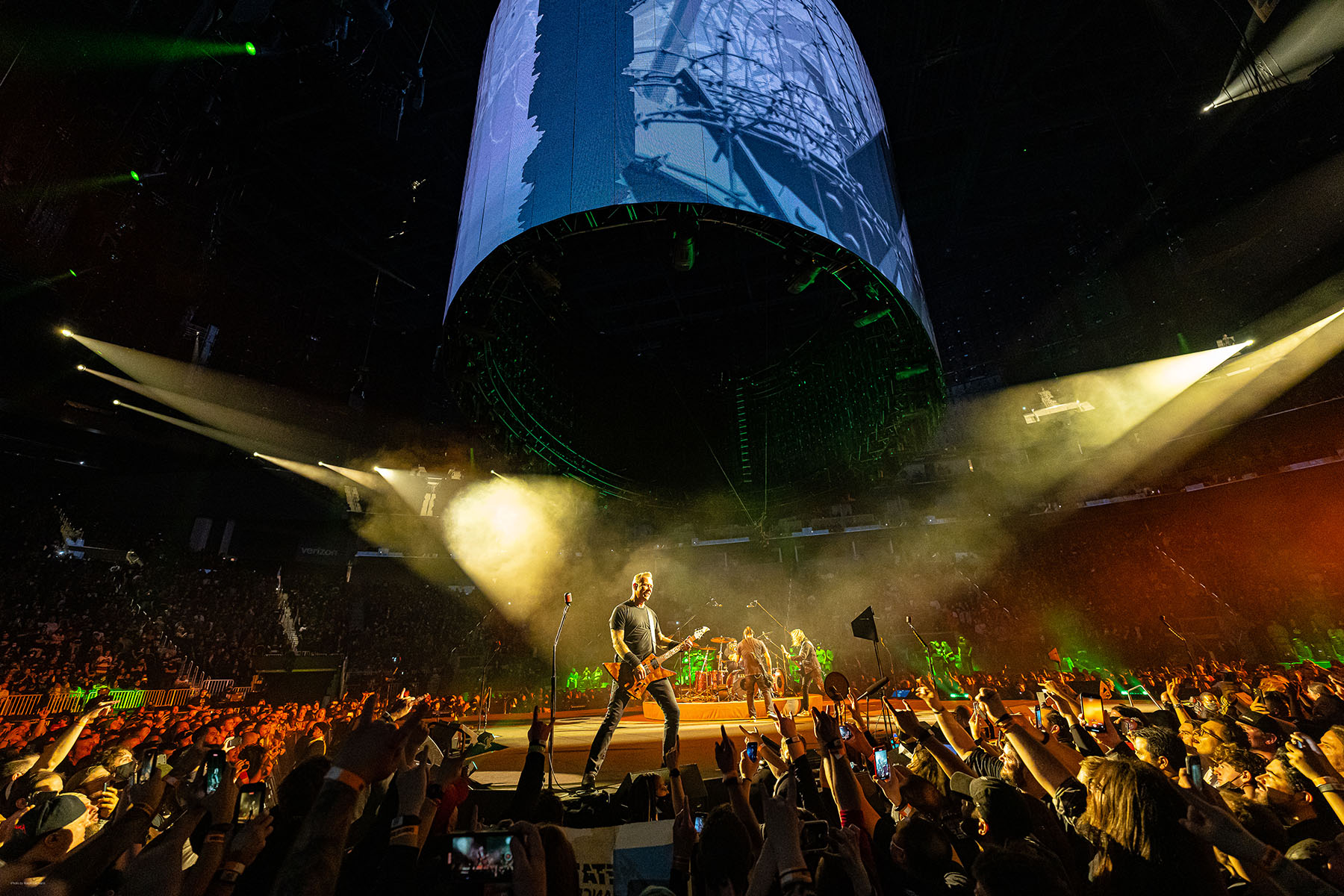 This is another example of where the meticulous advance detail and co-operation between the two disciplines – between PRG project manager Eric Geiger and crew chief John Moore, and Premier Global Productions project manager Anthony Kordyjaka and crew chief Jason Lanning – paid off, with Rob’s BMFL WashBeams cruising into place once their time came thanks to some superlative thinking and planning by Head Rigger and “all around magician” Chad Koehler.

Lighting equipment was supplied by Premier Global Productions out of Nashville, Tennessee, and Rob’s account handler there is James Vollhoffer. Lighting crew chiefs on site were Anthony Kordyjaka and Jason Lanning and video kit was from PRG. The two visual departments also merged and co-managed all their cabling and other basic infrastructure.

Even after 14 years and multiple memorable Metallica experiences worldwide, being part of these two shows was “amazing,” recalls Rob. He got to rediscover songs like “Bleeding Me”, and “Dirty Window” … as well as “Fixxxer” which ignited the internet and thousands of memories from a performance action packed with memorable moments.

Most of all he enjoyed the incredible teamwork – under tight control of production manager John “Lug” Zajonc – the natural synergy, plus the expertise and imagination of the individuals and departments involved in creating and making these shows such great events, of which “everyone can be proud”.