This year, the Opus honours two projects that could not be more different, and yet both are in the spirit of a creative approach to the challenges of the crisis. Last summer, the “Dionysos Stadt Open Air” showed that, with the courage to take risks, impressive art and culture experiences can be realised even in times of tough restrictions. The creators of the project “Woodkid @ ZDF Magazin Royale” broke new technological ground. Using complex photogrammetry processes, they succeeded in making an augmented reality version of the artist appear in the studio for a joint appearance with the RTO-Ehrenfeld. For this extraordimary achievement, the jury awards the TV event with the newly created special prize “Opus AVantgarde”.

The Opus is considered one of the most prestigious awards for outstanding stage projects. The award ceremony will take place on 28 April 2022 as part of Prolight + Sound. From 26 to 29 April 2022, the trade fair in Frankfurt am Main will kick off the season for international industry events relating to media and event technology and present products and solutions from hundreds of exhibitors. 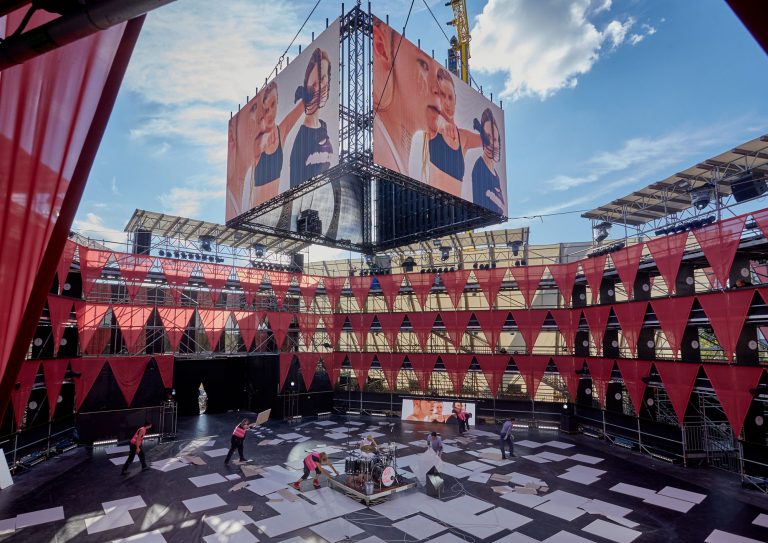 Dionysos Stadt Open Air: Culture defies all odds
Culture fans experienced an almost ten-hour theatre marathon in the Kaiserlei district between the cities of Frankfurt and Offenbach in July 2021. The acclaimed and multi-award-winning production of the Munich Kammerspiele by director Christopher Rüping thrilled audiences in a version specially adapted for the spectacular open-air stage “Sommerbau”, initiated and produced by Frankfurt’s “Künstlerhaus Mousonturm”. In an impressive ambience, the temporary venue designed by the architects and artists group “raumlaborberlin” made it possible to hold major public events after months of lockdown under strict hygiene regulations. The Sommerbau accommodated around 350 visitors – 200 of them in canopied 2-seater boxes on three floors. When designing the Sommerbau, “raumlaborberlin” played with geometric shapes and aesthetic possibilities. They created a round building with six corners and three mighty side wings, which gave rise to a large arena in the middle, measuring over 25 metres in diameter.

Not only the location of the event was unusual, but also the performance itself. With eight actors, some playing several roles, “Dionysos Stadt Open Air” spanned the history of the gods, heroes and humanity from Zeus and Prometheus to Achilles, Helen, Cassandra and Electra to the here and now. The unusual circumstances demanded a number of workarounds from the team. For example, there was no lacing floor in the summer building. Therefore, a crane was integrated into the production – for example, to lower Prometheus’ cage into the arena and pull it up. Furthermore, due to the open-air character, lighting moods could only be realised in the late evening hours. It was all the more the responsibility of the actors on stage to keep the audience’s attention and enthusiasm throughout the many hours of the mammoth production, and they succeeded impressively.

The Opus jury praises Dionysos Stadt Open Air as an extraordinary overall experience. The project proves that cultural highlights can be realised even under the most challenging circumstances when many hands pull together. The people in charge took a great risk both with the construction of the temporary venue and with the selection of the challenging material, which paid off brilliantly in the end. 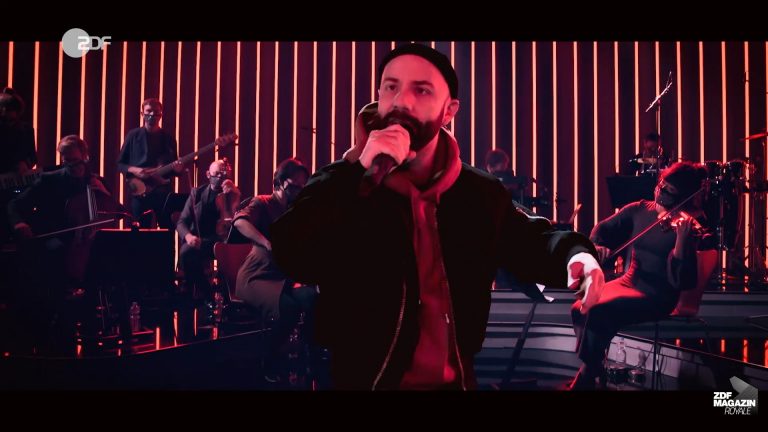 Woodkid @ ZDF Magazin Royale: first winner of the “Opus AVentgarde” award
Presenter Jan Böhmermann’s show has already attracted attention in the past with technically impressive video tricks. For instance, many people will remember the satire about the allegedly fake middle finger of Greek politician Yanis Varoufakis.

Another eye-catching project followed in winter 2020. Due to the lockdown in Paris, a planned performance by the musician Woodkid in the studio of ZDF Magazin Royale could not take place. Under the direction of Creative Producer Constantin Timm, the people in charge at “Unterhaltungsfernsehen Ehrenfeld GmbH” decided on a highly complex solution that had never been implemented in this form before. Using a complex photogrammetry process, the artist was recorded in a green studio in France. The result was a 3D model that was processed as a virtual scene with the help of the Unreal Engine originally programmed for computer game development. The specialists at the Solingen studio “von | Berg” then merged the scene with the image from the recording studio in Cologne, which had been measured for augmented reality effects.

A particular challenge was the meticulous synchronisation of the lighting mood between the studio image and the virtual Unreal environment. This was the only way to create a perfect immersion for the viewers – and a coherent overall picture that is hardly distinguishable from real-life interaction at the same location.

The jury praises the groundbreaking approach that the people in charge chose to perfectly create the impression of the live performance of an international artist in times of the coronavirus. In the future, this process also has the potential to serve as a way to preserve musical performances and recreate them in digital space.

Woodkid @ ZDF Magazin Royale is the first project to receive the newly created special award “Opus – AVantgarde”. This prize is given for works that go beyond the classic stage performance and depict current technological or staging trends in a future-oriented way.