Sculpting a fluid and kinetic visual collage aligned with the heartbeat and spirit of rave was a task lighting and environment designer Eran Klein relished for Black Coffee’s recent incendiary performance at Drumsheds in north London. 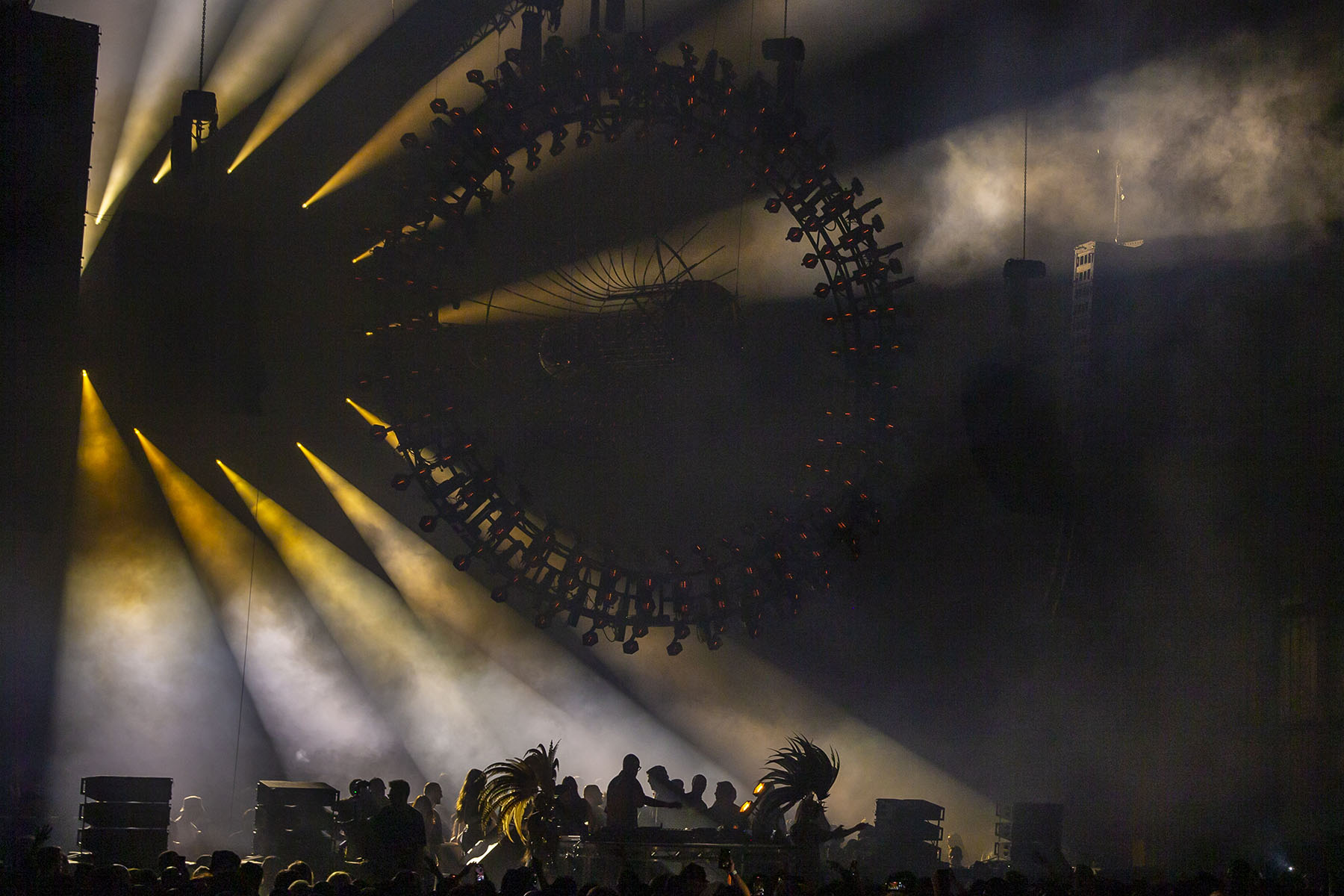 Staged in this ground-breaking newfound space, once part of a gasworks, the gig captured  an important moment in time as live in-person events continue enthusiastically following lifting the initial covid lockdown restrictions in England.

For Eran, the design was more about enveloping the whole space in good vibes and energies.

While the DJ was obviously at the centre of the action with everything radiating out from him across the entire space, rather than Black Coffee being separated and isolated on a stage, the DJ booth was located two thirds of the way down the long narrow space with the VIP dancing platforms immediately behind.

This effective in-the-round positioning enabled everyone in the room to properly connect with the music.

Eran’s lighting design took full advantage of the venue’s 20 metre trim height, with an impressive 11 metre diameter trussing circle centrepiece flown immediately above the DJ booth, complete with a ‘jewel’ in the middle and a laser. 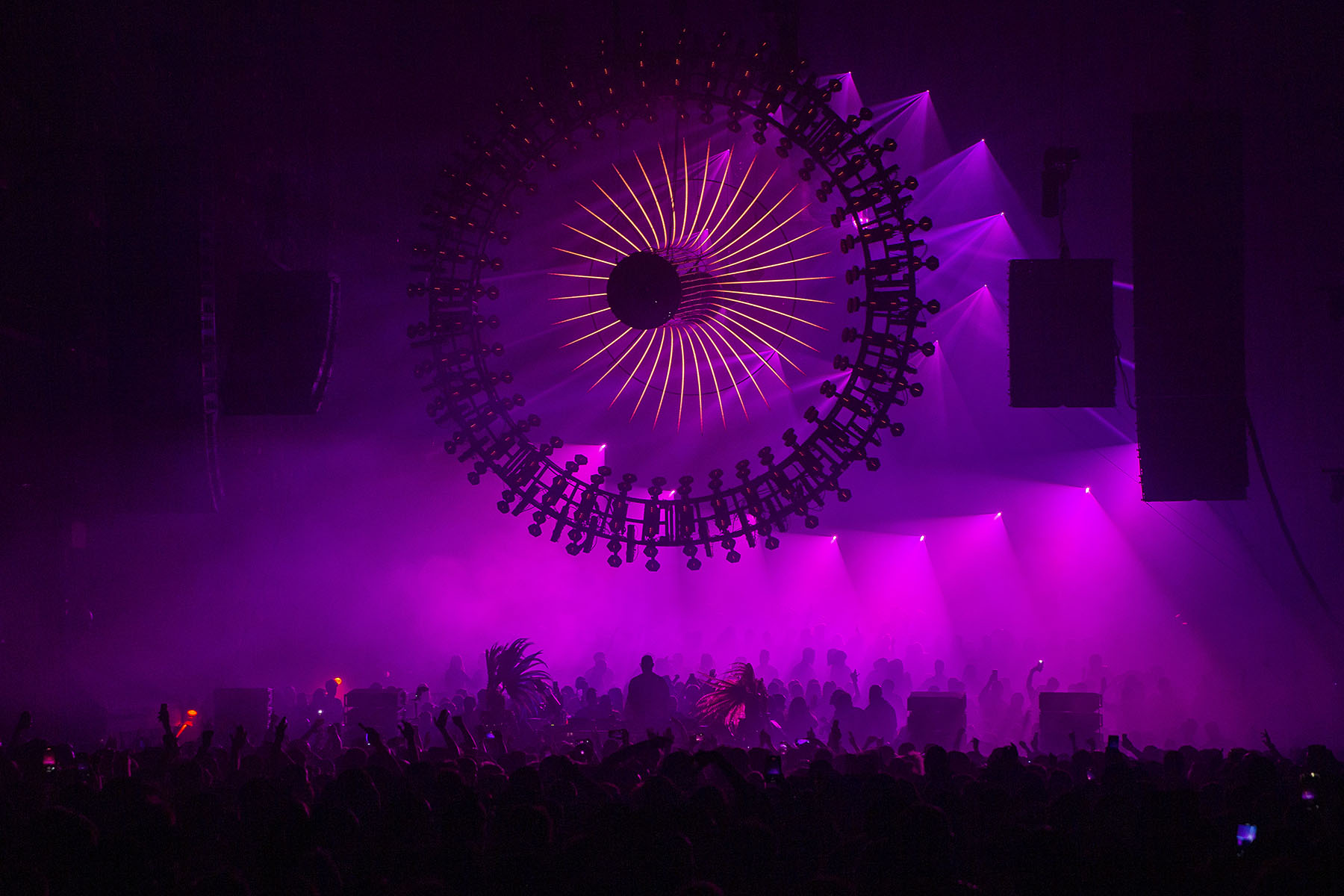 Behind this – in the upstage position – he needed a strong lighting presence, so Robe MegaPointes were chosen for this core design aspect, with 12 fixtures rigged on a 6-metre diameter circle plus eight Robe Spiider wash beams. All these pointed forward adding depth and movement to the picture, blasting purposefully down the room.

Another 8 x MegaPointes were deployed on vertical trusses beneath the circle truss at varying heights, and two ladders on the upstage walls were each rigged with three MegaPointes for side back lighting and sweeping across the space.

These also provided contra-light for the dancers and pin-pointed the main (of several) upstage mirror balls.

All these rear MegaPointes were Eran’s ‘go-to’ fixtures for creating those energising bold slices, streaks and wedges of light and breakup effects shooting through the VIP area highlighting hands-in-the-air and dancing bodies. “I actually had to pull these particular MegaPointes down a bit as they were too intense at times!” he admitted!

The side and lower MegaPointes contrasted dynamically with the luminaires on the circle truss and complimented the centrepiece lighting when that fired up just before Black Coffee took to the decks to get everything pumping for the final three hours of the event.

Eran loves all the creative options that Robe products offer his show designs. In this case, with doors opening at midday and the room being full from the off, as music fans imbibed the vibes there was around 8 hours to fill with interesting visuals, and Eran relied on these Robe fixtures to provide most of the visual magic. 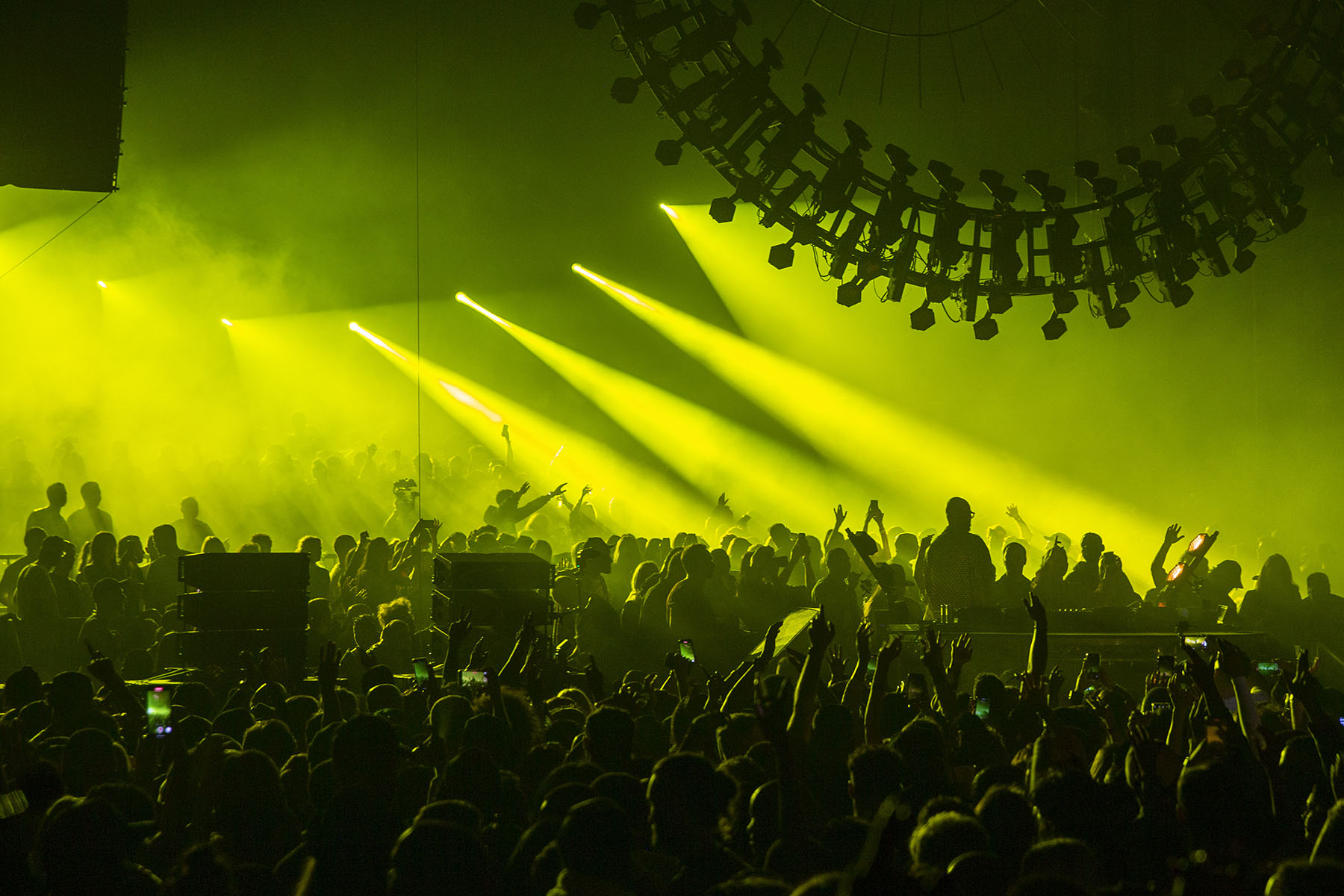 “I needed super powerful fixtures that could offer me A LOT of options,” he stated.

Another four Spiider LED wash beams were ensconced under the VIP stage shooting forward, while a single Spiider was dedicated to dramatically back-lighting and silhouetting the DJ.

“Techno music is fantastic for making lightshows,” enthused Eran, adding that the challenges – especially with a Black Coffee performance – are being able to react immediately and spontaneously with the musical flow, a fine art in terms of operating MO, all done completely live and organically!

He likes Robe products for many reasons, one of which is consistency. “Using the range of Robe luminaires, I get perfectly matching colours across the entire rig,” which helped emphasise the harmony that was a base element of this production design.

Considering the size of the venue, there were not a massive number of lights in the room but with judicious choices, Eran knew that he could maximise all of them and have enough latitude to keep things moving and grooving to the beat for the full event.

When the centrepiece lit up for the first time just before 9 p.m. the audible gasps from the crowd were “incredible – it was definitely a goosebump moment,” declared Eran, delighted with the results which had taken weeks of attention to detail and meticulous planning together with lighting vendor Siyan.

To help light the cavernous Drumsheds interior, Eran devised some special chandeliers each made up from three Robe PATT 2013s with a MegaPointe at the bottom, which were attached to the structural pillars down the room and used to lower the ceiling making the space more intimate at specific times.

He particularly wanted to craft an ambience with the big, elegant dish and the tungsten glow of the PATT 2013s that riffed with the raw industrial architecture. 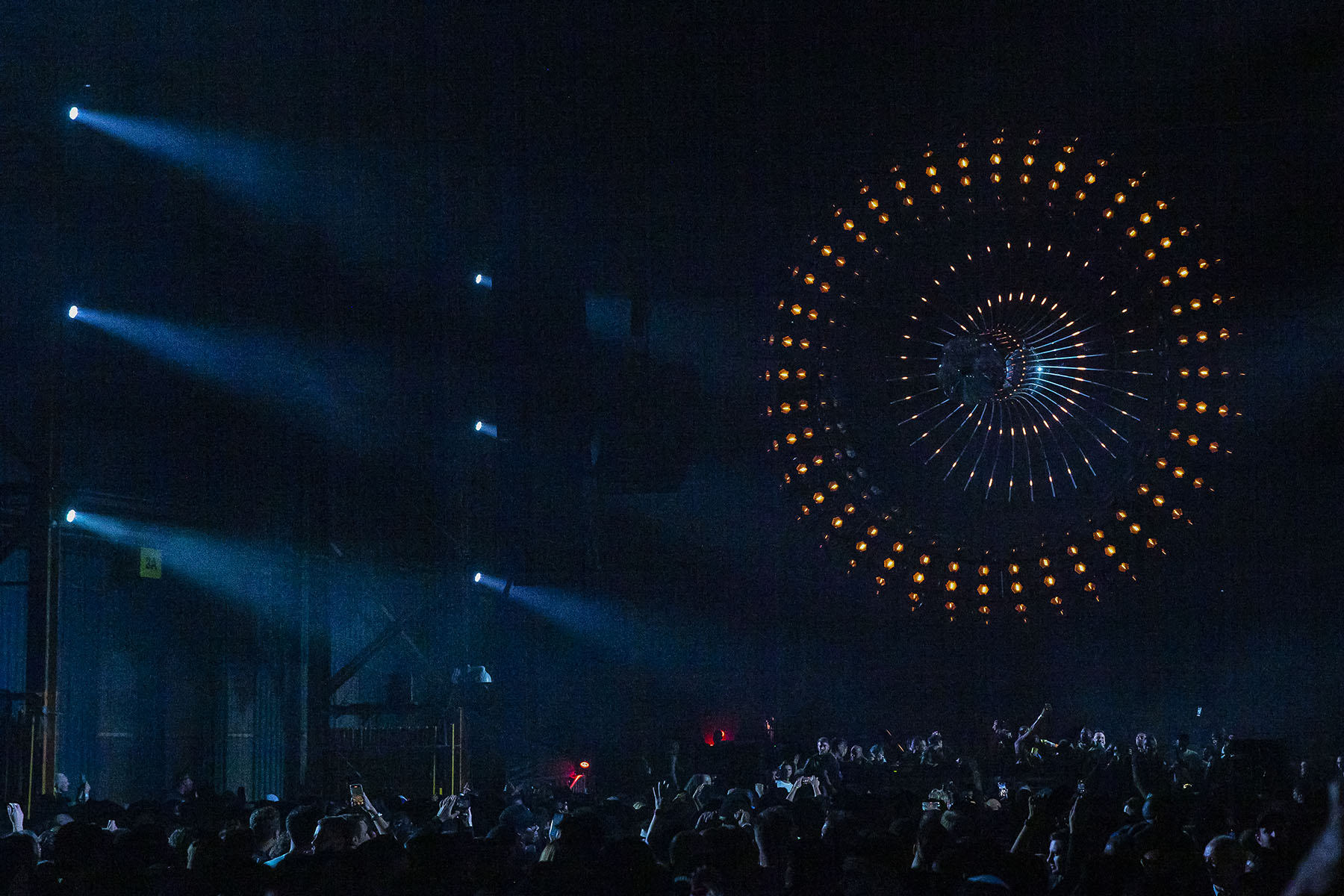 Thirty-six LEDBeam 150s deployed on the structural pillars down the room lit up and interacted with the audience, adding to the feeling of inclusion and involvement in this live experience … rather than people simply being there and watching a lighting or visuals show.

Eran programmed and ran all lighting on a grandMA3 console. “It was a giant rave … like a volcano … rumbling and exploding with molten energy,” he described. He collaborated closely with Naor Bonomo, laser programmer and operator who used a Madrix system, and Eran was assisted with the WYG visualisation by Goldsztayn Yaysson.

The event’s creative director was Oren Heknin, the producer was Maya Aviv, Itay Harpaz stage managed and Assa Efrat created the sound design. The scenic and LED pixel integration for The Jewel was completed by OX.

Post gig, Eran was blown away with the wealth of positive feedback and responses from people who loved the gig.

And naturally, everyone involved was grateful for the chance to be back imagining and realising live shows for people to participate in person and in real time after being deprived of this essential experience for so long due to pandemic restrictions.