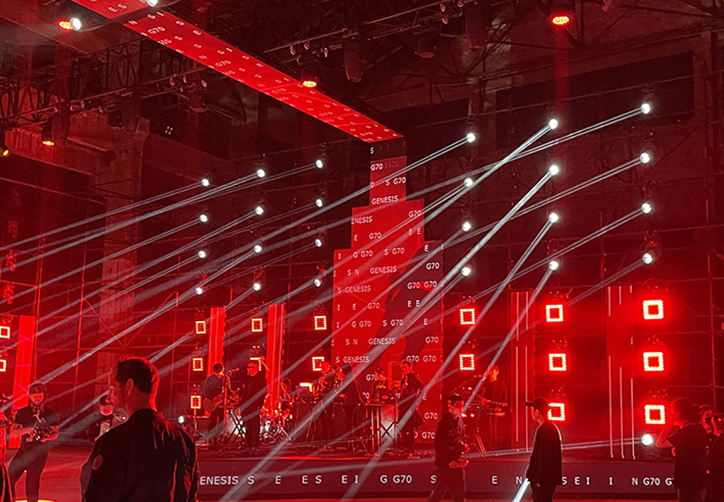 All of the LED displays and projectors were active for the event’s open, welcome and promotional video. A dancer and mirror lighting effects highlighted the vehicles’ reveal, then the cars were driven, in drifting mode, to the accompaniment of a VJ video. The side projectors took over for the Genesis keynote. Then the performance stage’s LED display enhanced audience photo ops, the reception and live band music.

The project manager at Really Beijing, which was responsible for AV equipment, installation and control, chose Analog Way’s Aquilon RS4 to drive all the LED displays and projectors. The RS4 received content from the media player, VJ computer and band computer. Presets were edited with Web RCS and controlled by Elgato’s Stream Deck.

“The RS4 greatly reduced the equipment needed and simplified their connections,” notes Yang Li, Technical Support Engineer for Analog Way. “The event required 11 x 4K and five 1080p video inputs and 15 x 1080p video outputs. The initial design was using four video processors for this setup , while we just needed one Analog Way RS4 to get the job done perfectly.”

“All programing and configuration was done through our Web RCS interface (Web based), so there was no need to install extra software,” he adds. “RS4 also supports third-party controllers like Stream Deck for flexibility.”