Optocore North America has provided an extensive fiber optic audio network for The Rady Shell at Jacobs Park, the San Diego Symphony’s new, state-of-the-art venue. Situated in San Diego Bay, the 10,000-cap outdoor amphitheater becomes the first permanent year-round waterfront concert and events space in the US to be operated by a symphony orchestra. 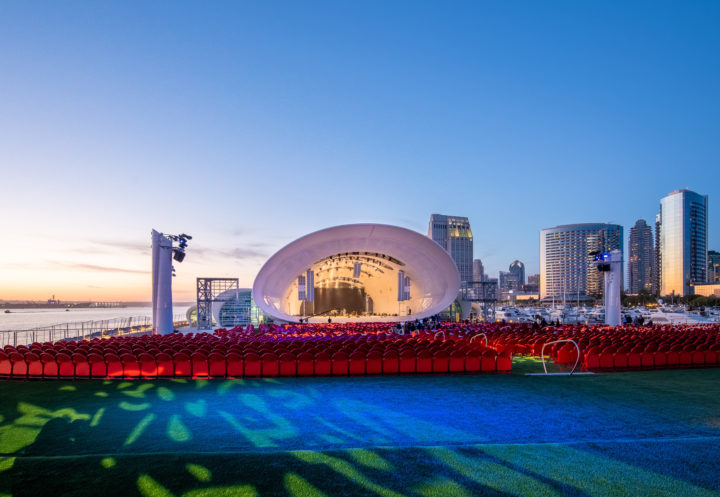 As it took up residence in its new space, one of the Orchestra’s imperatives for a venue designed to be one of the most acoustically superior outdoor concert venues in the US,
was to have an expanded fiber network that would allow for recording every show and rehearsal for archival purposes. This required modification of Optocore devices to allow for new levels of connectivity with DiGiCo, the house mixing consoles.

The work was undertaken by Solotech, who supplied and integrated all the audio, under the watchful eye of Business Development Manager and Senior Engineer, Aaron Beck. Their approach built on their success designing and building forward-thinking systems around the Optocore solutions for Cirque Du Soleil’s Las Vegas residencies and the National Arts Center, Ottawa, to accommodate the massive channel counts and data required. In San Diego, 2GB Optocore networks—capable of up to 1024 channels and 24 network nodes—were implemented into the outdoor concert hall.

The facility has two Optocore rings running in parallel—one for the DiGiCo consoles and their SD racks at the stage inputs, the other purely for Optocore units that carry the PA inputs and distribution, including tie lines between locations and stems from the stage racks for recording purposes. The DiGiCo network consists of SD consoles at FOH and monitors and three SD racks that can be deployed as needed.

At the heart of each system is an Optocore AutoRouter that actively monitors each fiber connection. As soon as a rack or console is connected to a remote patch point, the AutoRouter reconfigures the network matrix to maintain a redundant star topology to all active nodes. Optocore units that are in fixed racks are always connected to the AutoRouter, constantly streaming through hardwired, installed fiber. Mobile connection points around the facility include FOH, monitors and Stage Left/Right which can be activated simply by plugging in a rack.

“Optocore allowed us the flexibility required with the overall design of the system,” stated Beck.  “It is very easy to add or remove devices with the Route 66 AutoRouter as the system changes.  Each show can have different configurations and requirements, but with Optocore it is very easy to change how the system performs.”

Each SD rack contains a local Optocore DD4MR-FX which takes a split from the FOH system’s main inputs and routes them for archiving and recording purposes. Each of the DD4MR’s MADI BNC ports can transmit or receive up to 64 channels at 48 kHz or 32 channels at 96 kHz.

The main FOH console feeds the Optocore network via another DD4MR, with 64 MADI I/O at 96 kHz available to capture the highest quality audio without interference or signal loss.

Optocore is used to distribute the main mixes from FOH to the system processors. The processed signals are loaded back onto the Optocore network and sent to the three amp rooms at Stage Left, where the main interconnect is, Stage Right and one in a separate building at the rear of the audience for delay speakers. 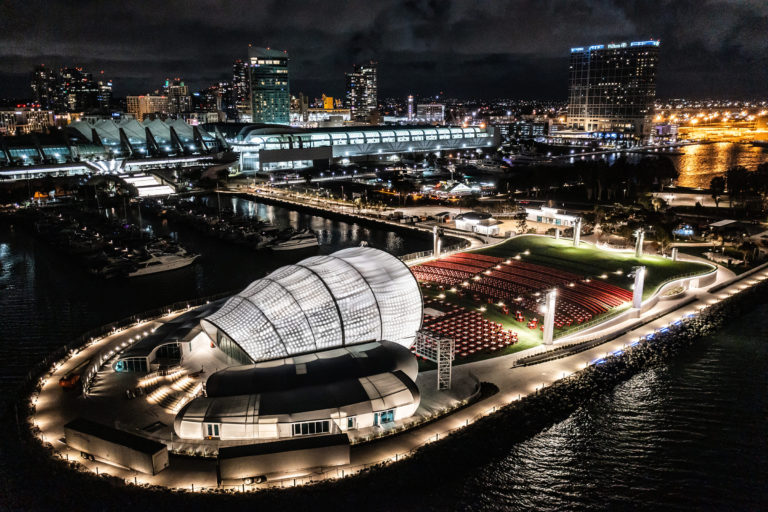 Instead of typical analogue tie lines between locations Optocore’s AD/DA converters are used to fill any other audio requirements and distribute them around the facility, with the cross network interconnect largely utilising the X6R-TP hardware versions.

Further system connectivity is provided by a pair of Optocore X6R-FX-8MI/8LOs in the Monitor Rack and at the Stage Manager’s Desk.

Built into a grass hill at the rear of the audience is Building B, which among other things houses a video control room. From here, an X6R and amplifiers feed the delay/surround speakers with further functionality to output 128 MADI I/O on fiber via two DD2FR-FXs.

Another component of the Optocore system and how it interconnects everything is an X6R-FX-IC422 unit in the Central Equipment Room. This device connects to the ClearCom Delta frame that provides the facility’s intercom. With ClearCom’s development partnership with Optocore, digital intercom and control can be passed right over the network like any other audio channel through a specifically designed I/O card for the X6Rs.

In summary, Aaron Beck couldn’t be happier with the implementation. “The system sounds fantastic and keeping everything at 96K was a must from the system design. The use of fiber optic cabling between buildings also helped overcome the large distances as the site is very spread out.”

The Rady Shell at Jacobs Park will host up to 110 events a year by the San Diego Symphony and other organisations, while on days and evenings, when concerts are not scheduled, the park will be open to the public.