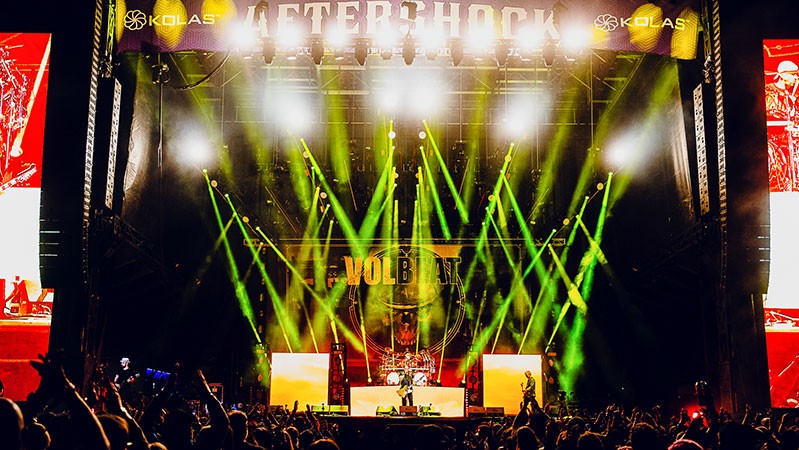 Formed 20 years ago, the band’s stage set has been lit by Bjerregaard for the last 13 years, after he was initially hired for a one-off festival show. “We went from a club-size production to a 22-truck European stadium production in just a few years,” he says.

Aftershock was part of a previously postponed North American tour leg after coming back out of Covid-19. Production consisted of a powerful floor package and LED screens, tied into the existing venue and festival lights. “On the day we played [Aftershock] the rig had been designed by Jon Eddy for the Misfits, who were headlining the day after us. A brilliant and fun rig to play with, it was top loaded with JDC1 strobes. We were able to fit our entire production into the festival stage and had a great day there.”

Originally co-designed with tour manager Guy Sykes for Volbeat’s return to the US, Bjerregaard reports: “I pre-programmed the show from home three weeks leading up to the tour before the entire production team assembled in Nashville, TN, at PGP [Premier Global Production] to pre-programme the light and video.”

The JDC1 is currently his go-to effect light and strobe, he says unequivocally. “It is more than just a strobe or a colour batten; it covers so many of the functions I am looking for in a great effect fixture. I use it for different scenarios – strobe, colour wash, key light, pixel light, curtain sweep – while the possibility of adding a strobe effect on top of a colour effect is unprecedented. As for the X4 Bar 20, I use this for outlining stage sets with colour and colour effects and curtain looks.” 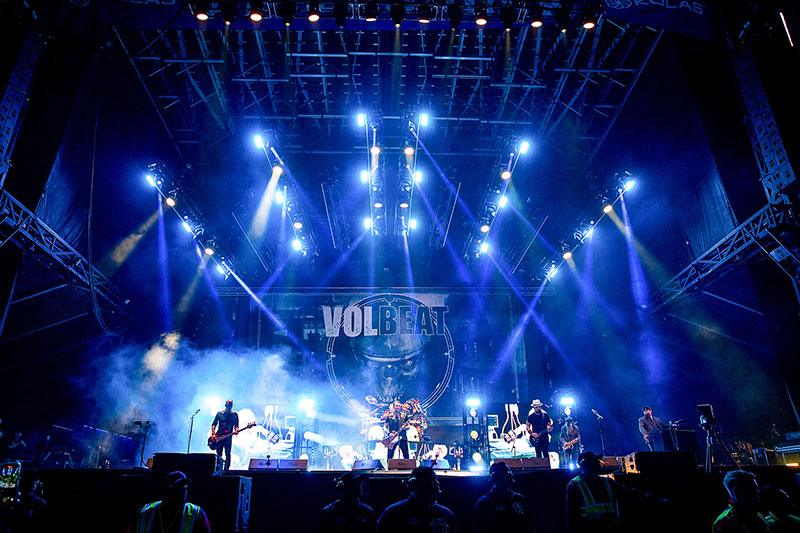 He adds that the possibilities with high-channel usage on both fixtures “are amazing and well worth taking the time to programme, as the payback is outstanding.” Bjerregaard had the JDC1 programmed in Mode 3 (68 channels) and was running at full tilt. “Its ability to blend into a stage set and become one with the rest of the lighting design is amazing. It’s possible to have the JDC1 integrated in an overall colour effect running across the stage; then to do a crazy strobe effect on top without losing the colour effect is very cool.”

The X4 Bar 20 was also programmed in a high-channel mode, and Bjerregaard used them as both an effect and set light. “The possibilities of the zoom becoming either a blinder effect or a razor-sharp curtain is definitely worth exploring,” he adds.

Bjerregaard says he loves the way his new Chamsys MQ 500M makes it possible with ease to programme a high channel fixture to make the most of it: “I pre-programmed the show using the integrated Visualiser and a few key lights for reference, among them the JDC1, so I could explore its many possibilities and facets.”

Niller Bjerregaard remembers using GLP products since starting out with Volbeat, deploying 24 impression X4 wash light as a part of a floor package on a European festival tour. “I have been a fan ever since,” he explains. “In recent years I have been fortunate to see the JDC1 and KNV Cube first hand at the development stage, and I knew that the JDC1 would be a smash hit as no other fixture on the market offered so many features and power. 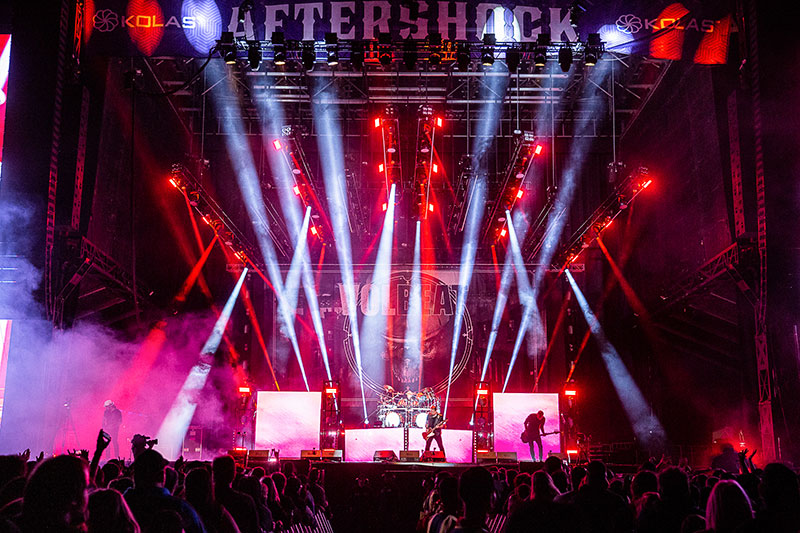 “GLP has always stood for quality and innovative fixtures. For example, when the impression X4 came out, they were the first to remove the base of the fixture and put power supply and cables into the arms of the light, which became their trademark and is still today a key feature. The same with the JDC1, which is unique with its multiple functions and power. In a short time it has become a go-to fixture for many lighting designers around the world.”

As both the JDC1 and X4 Bar 20 were key players in the design and execution of the Aftershock stage rig, both are in line for further adoption on the upcoming design for Volbeat, starting in the US in January 2022, according to the designer.