Church on the Move truly lives up to its name. Established in 1987 with a mere 163 worshipers, the fast-growing Tulsa, Oklahoma organization now has over 7,000 members worshiping at three campuses surrounding a 2,200-seat main sanctuary. Recently, that primary location underwent a major systems renovation that included the installation of a new K2 loudspeaker system, designed and installed by Oklahoma City-based Skylark AV, an L-Acoustics Certified Provider, Install. 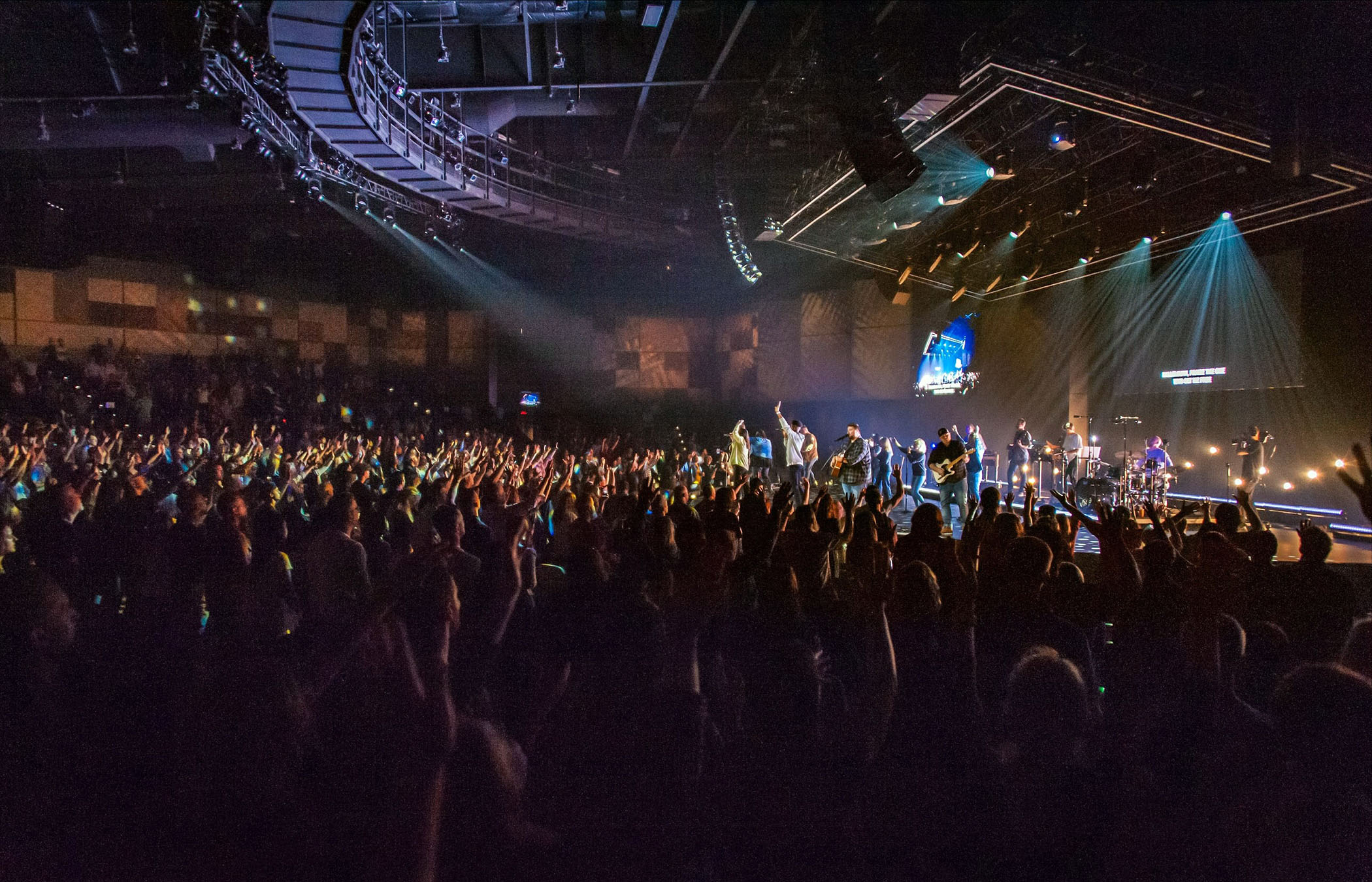 As its moniker suggests, Church on the Move knows where it’s going—a new satellite in the suburb of Broken Arrow is slated to open this fall with its own L-Acoustics PA system—as well as how it wants to get there. “The church knew what they wanted, and they wanted L-Acoustics right out of the gate,” says Steele “Ninja” Beaty, project manager at Skylark AV. “The only question we had to decide was: which L-Acoustics speakers would work best?”

K2 was chosen based on three things, says Skylark AV’s Todd “Linchpin” Cromwell: “Performance, musicality, and SPL. Church on the Move is very much a contemporary worship church when it comes to music, and it can get loud. At the same time, we had to keep speech intelligibility in mind. Fortunately, with L-Acoustics, when you achieve one, you also get the other automatically.”

The church’s director of production, Johnathan Basquez, says both of those characteristics are critical. “The clarity of the K2 system is remarkable; you can have someone across the room on a microphone, and it sounds like they’re standing a foot away from you,” is how he describes the experience. “It’s the best intelligibility I’ve ever heard in a PA system, anywhere.” He also cites the consistency of that experience: “The music can go from loud to soft, from 98 dB to 76 dB, but it never loses its presence. We like a lot of low end in the sound, and it’s there, but we also like to be able to hear the vocals very clearly, and now we can. In fact, you can pick out each and every instrument on stage. The definition is amazing.”

Church on the Move’s new loudspeaker setup consists of 10 K2 per side in a left-right main-system design, with three K1-SB subs flown behind each hang and eight KS28 subs arrayed below the stage. In addition, a dozen Kara II per side are used as outfill arrays, two A15i as extreme sidefills, and 14 short-throw 5XT as frontfills integrated into the stage, so they are out of sight. All loudspeakers are managed by the L-Acoustics P1 processor and connected by five LS10 plug-and-play, Avnu-certified AVB switches that integrate seamlessly within the L-Acoustics ecosystem and further simplify connectivity. Fourteen LA12X amplified controllers are used to power the K2 and subs, while seven LA4X provide muscle for the Kara II and 5XT systems.

While the new L-Acoustics system is well matched to the church’s performance needs, it’s also a good fit for what Beaty says is its top-notch technical staff. “The technical culture at Church on the Move is very high—they were able to keep their previous PA system going long past its prime—so the new sound system had to be commensurate with their abilities as well as the venue’s needs, and it is,” he says. “They needed a concert-level PA system, and this is it.”

Basquez, who also mixes sound for weekend services, says the church’s 120-strong corps of volunteers are enjoying the sound of the new system. “Some of them are farmers during the week, others are running companies, but all of them can hear the difference,” he says. “What’s interesting, though, is that almost everyone thinks this system is louder than what we had before, even though we’re actually running it 6 dB lower. It’s all about the presence that K2 brings with it.” 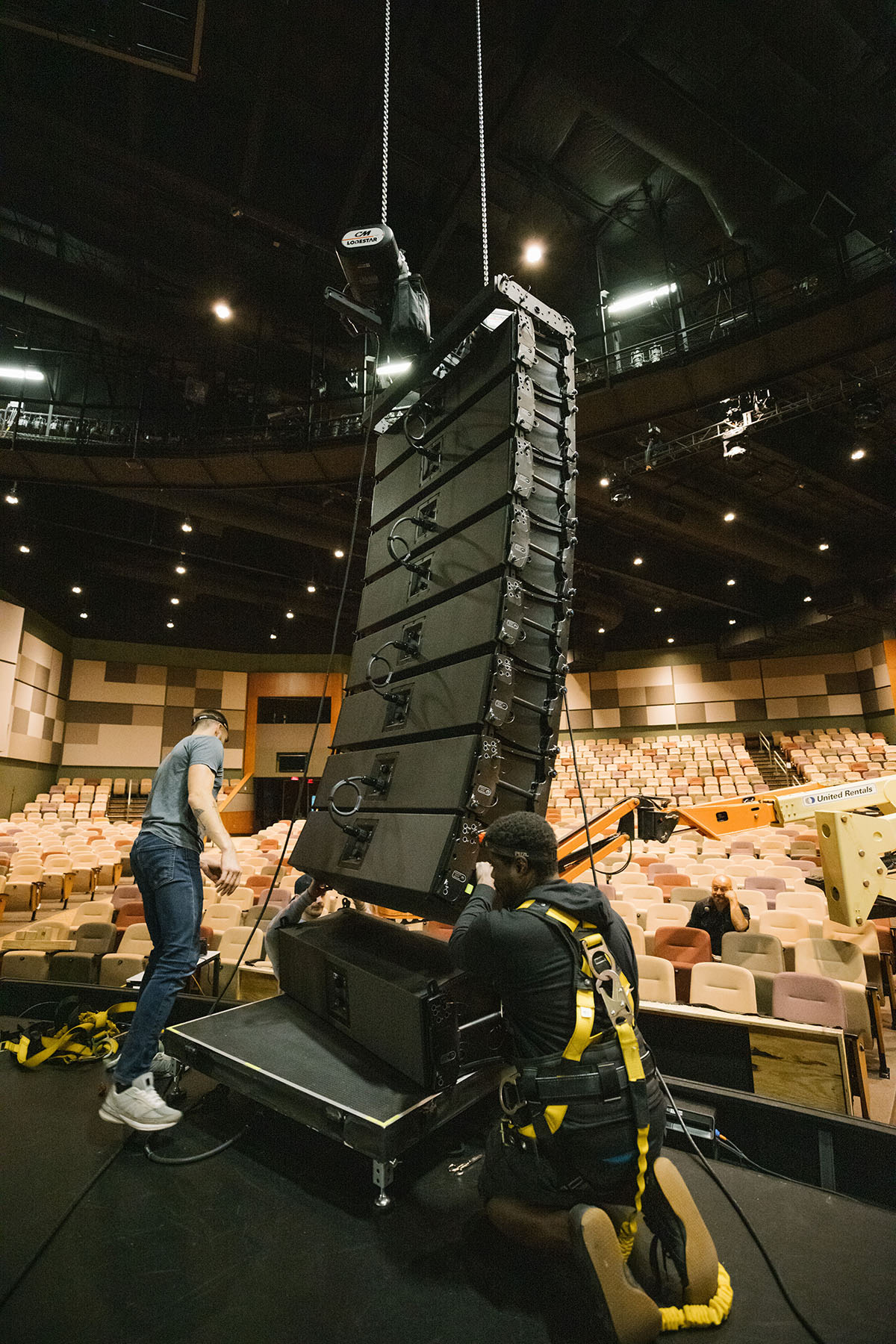 Although Church on the Move’s main worship auditorium is a large space, both the site’s monitor and broadcast mixes are also being driven from the FOH console, and the new PA has been helpful for those as well. “We have now been able to remove the EQ and settings from our channel strip, which has drastically improved our monitor mixes,” he notes. “In fact, many of our vocalists and band members have told me that they have never heard their in-ears sound so ‘open, full, and natural.’ And we’ve received many compliments online about our broadcast stream fidelity as well. This just proves that a transparent and well-designed speaker and system can provide additional advantages beyond the obvious ones for those who are sitting in front of the PA.”

Meanwhile, when construction on the new Broken Arrow location is completed, scheduled for November 14, it will house an equally impressive sound system scaled for its 500-seat auditorium. There, the PA will comprise a left-right system of three A10 per side—two A10 Focus and one A10 Wide—with one KS21 sub flown behind each main array and buttressed by four Syva Low and four Syva subs. In fact, Syva components comprised the sound system for Broken Arrow for the three years it existed as a portable church, since July of 2018. The main system is supported with left-right sidefill arrays of one A10 Focus and A10 Wide each. In addition, an X8 acts as a centerfill, and the entire system is powered by three LA4X and one LA12X.

“The Syva Lows were chosen because of the stage height because we only have 15 feet of trim height in that room,” Cromwell explains, adding that this project is being integrated by Tulsa-based DC Pro, which purchased the system design and components from Skylark AV. “Church on the Move wants to keep their sound on the cutting edge, with the same level and quality of equipment in every location,” he says. “And L-Acoustics has the products we need to do that for them.”