The 2021 MTV VMAs (Video Music Awards) was back in-person, in style and with a live audience at the Barclays Center in Brooklyn, New York City … and making it extra special this year the event celebrated its 40th … so the pressure was on for lighting designer Tom Sutherland of DX7 Design to smash it in terms of visual flair for the occasion. 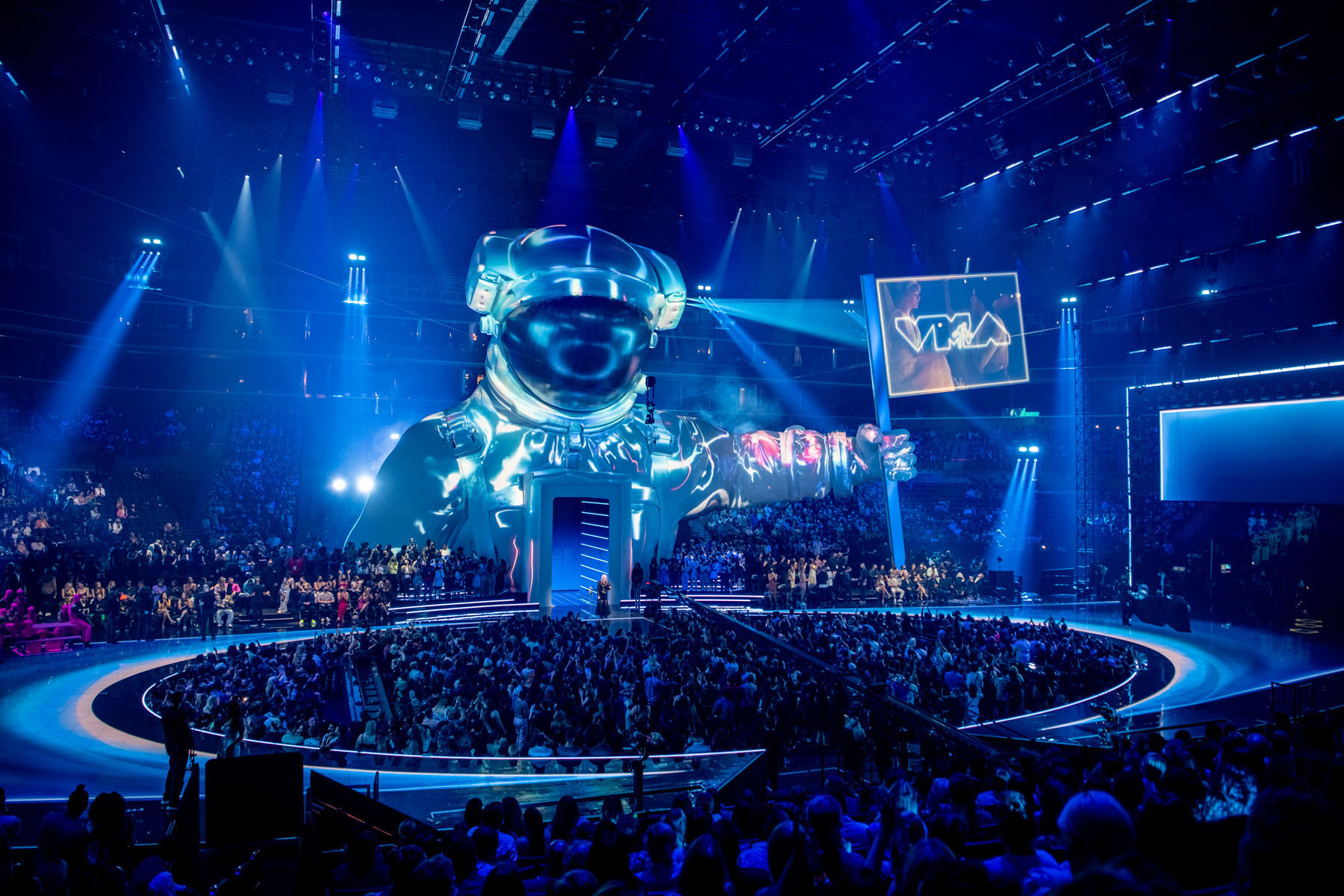 He accomplished this working closely with a talented team – including creative director Paul Caslin, camera director Joe Demaio and set designer Julio Himede of Yellow Studio – and with the help of over 300 Robe moving lights!

Last year was Tom’s first lighting this high-profile entertainment industry event famous for its super-slick visuality, and 2020 had also been special as it was the only VMAs to be staged virtually with an array of remote performances. So, this year everyone was delighted to be properly back to ‘live’.

Tom’s starting point for lighting was Julio’s striking set – the biggest and baddest ass of a VMAs scenic design to date – which included an enormous 45ft high inflatable astronaut towering above the long side of the stadium. The figure mimicked the popular VMA logo and awards statues introduced in 2017, inspired by images from various moon landings, and was brought to life for the show with video mapping.

The main artist entrance / exit point was through the astronaut’s chest, with two full stages built left and right of this, directly opposite one another, each occupying one entire end of the event space, with everything connected by an elegant 360-degree oval-shaped catwalk.

The catwalk was constructed from video floor panels which looked stunning in the overhead and crane shots, and it circled a sunken ‘golden circle’ pit, packed with ecstatic fans for the broadcast. There was a smaller circular performance space right in the center of the pit, so Tom needed key and effects lighting literally everywhere and from every angle to catch all the tightly choreographed live action and the fast-paced presentations, ensuring every shot looked fabulous. 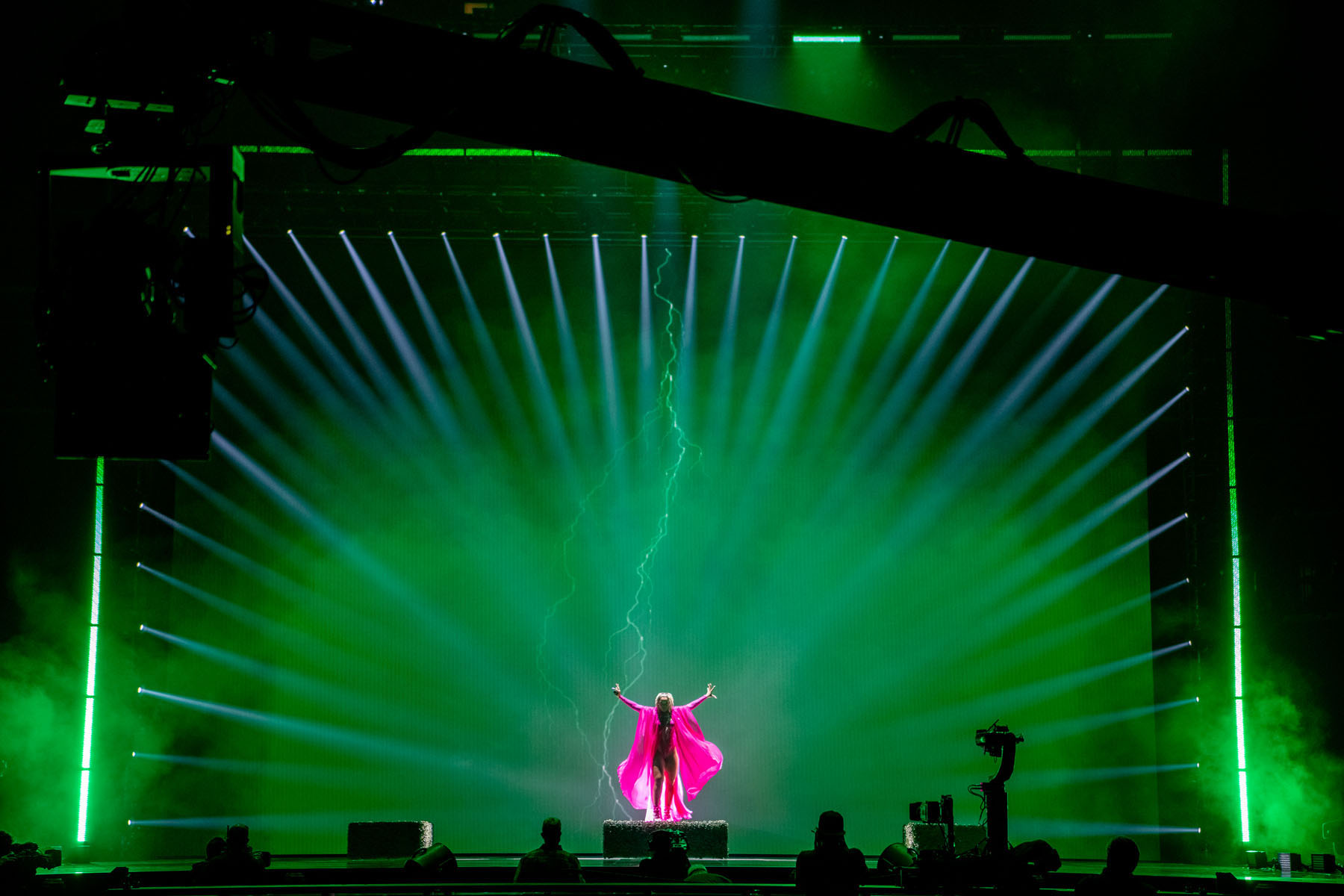 “As always, it was a careful balance of making the house look awesome whilst also satisfying the demands and wishes of the various artists’ creative directors,” he explained.

Fourteen trusses were installed in the roof space above the two stages, flown at different heights so they formed a dome-like shape with the highest trimmed at 70 feet. Most of the lighting was rigged on these trusses, including the BMFL WashBeams.

More BMFL WashBeams were on two long ‘offstage’ trusses that traversed the room lengthways both sides with angled end pieces.

BMFL WashBeams were picked for their “power and features” as Tom needed sources that really punched and could produce the thousands of different looks needed. With optimum positioning, they gave him great coverage for both stages plus the astronaut, the catwalk and all the audience sections.

MegaPointes framed three sides of each of the two screens blasting through scenic pros arch surrounds, creating big bold beamy looks and tunnels, cones and slices of fragmented light shooting all around the arena, and there was a 12 x BMFL WashBeam floor package also available on each stage.

These were used for outlining the central performance space – in the pit – for part of Buster Rhymes’ set with him also surrounded by the audience. The floor-based WashBeams were used to great effect to silhouette Lil Nas X and Justin Bieber.

Pointes were deployed around the inner perimeter of the ovular catwalk with another 10 Pointes each side flanking the astronaut. 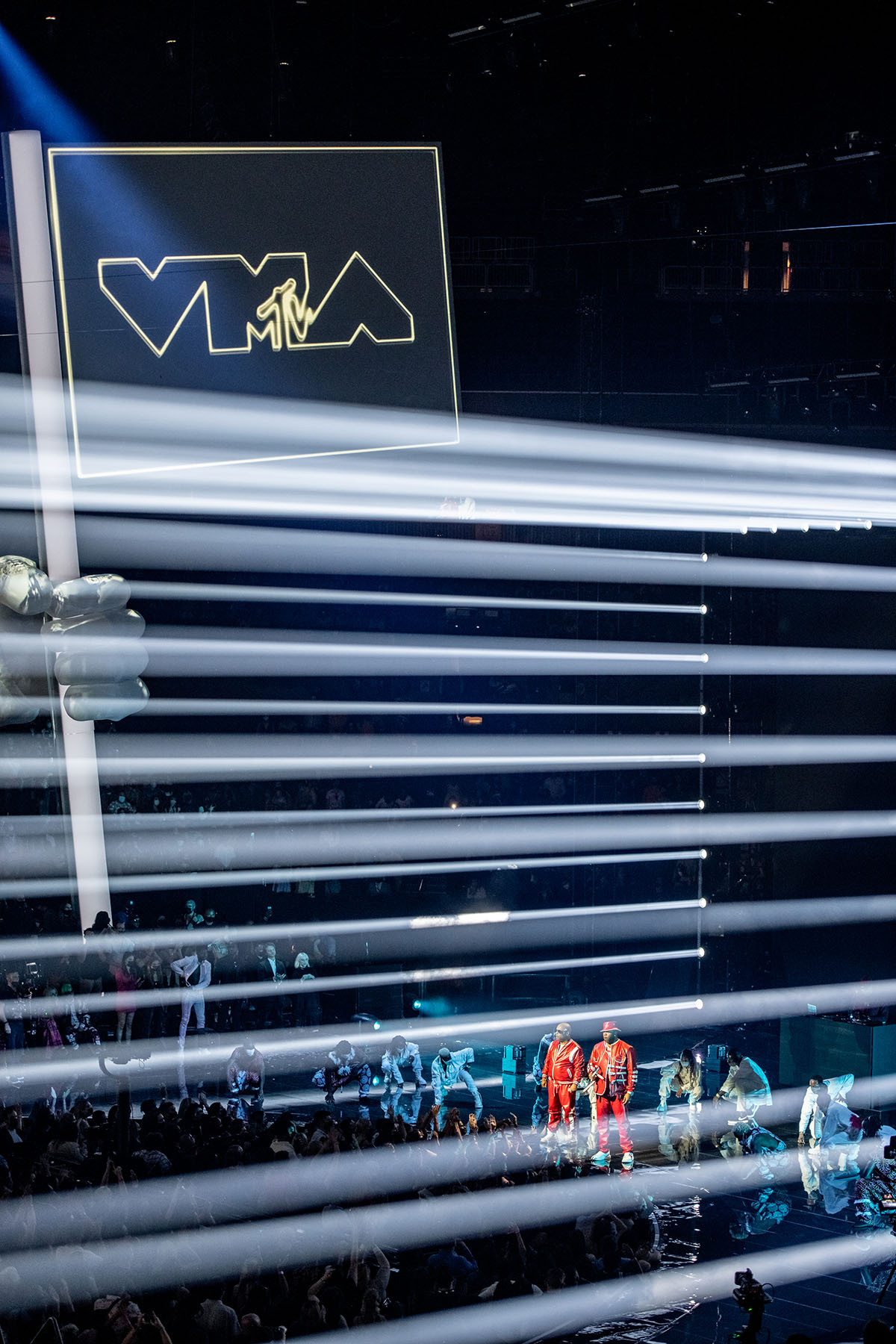 Tom’s design featured plenty of moody, dramatic shadowing and silhouetting and working the lighting to match the tone and raw aesthetic of some video content which looked great on camera and for the enthusiastic crowds.

For getting key lighting in exactly the right places, Tom found the RoboSpot system a perfect precision solution.

Ten of the 16 RoboSpot systems controlled 10 x BMFL FollowSpot LTs (with the integral camera) rigged on the ‘dome’ trusses which were trimmed too high for human follow spot operators to be working safely. “It’s a great system and was absolutely THE right product for the job!” he declared.

In addition to these, three upstage BMFL Spots per stage were controlled by the other six RoboSpot systems, making up the total of 16 systems.

The local crew operators had control of iris, dimmer and movement, everything else was done via the main lighting console, and spots were called by conventional light console operator Brian Jenkins, also one of Tom’s programmers.

In addition to Brian, also on Tom’s talented lighting team were directors Hunter Selby, James Coldicott and Jasmine Lesane plus programmer Joe Holdman who all worked on the grandMA2 control system. 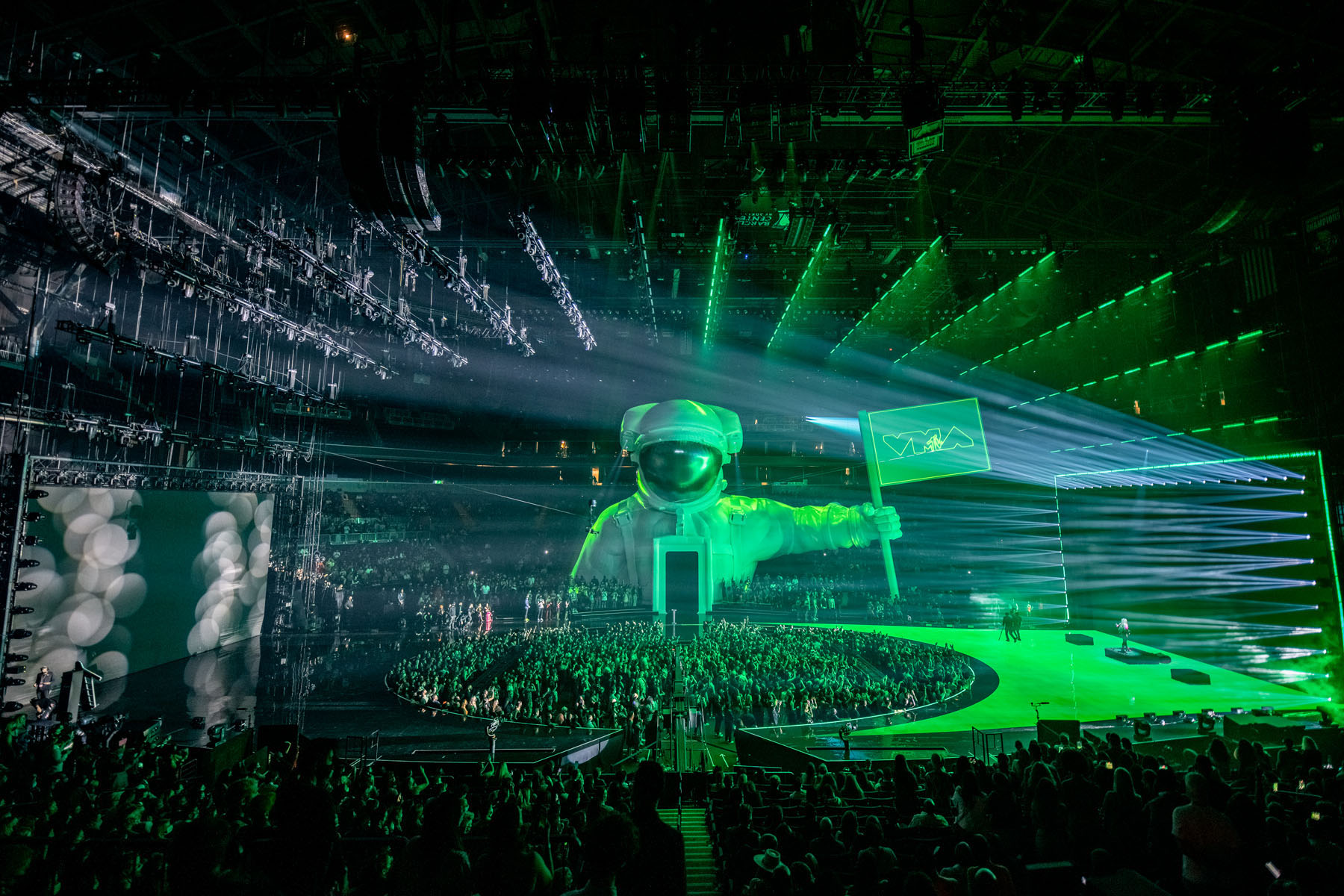 Lighting kit was supplied by Solotech, Harry Forster and Dave Evans were the account managers, the lighting gaffer was Alen Sisul and the techs were Dennis Sisul & John Cox. Head rigger was Brian Lolly of Kish Rigging who Tom compliments for the department’s “amazing” work.

Challenges for lighting included the pace and intensity of the action which unfolded over three hours of live TV featuring 14 star-studded A-list guest appearances including Kacey Musgraves, Camila Cabello, Lil Nas X, Normani, Foo Fighters, Chlöe, and Justin Bieber, all of whom wanted their own coolest onstage looks. The creative team saw them onstage only for their single 90-minute rehearsal slot … before having to imagine a different masterpiece presentation for each that blew everyone away!

The executive producers were Bruce Gillmer, Jesse Ignjatovic and Barb Bialkowski with Alicia Portugal the executive in charge.

The 2021 MTV VMAs was presented by American rapper Doja Cat. Lil Nas X’s “Montero (Call Me by Your Name)” won Video of the Year, and the artist and Tanu Muino also won the Best Direction award for this same popular and acclaimed work.

It was the first major US awards show to be back with a full capacity audience. 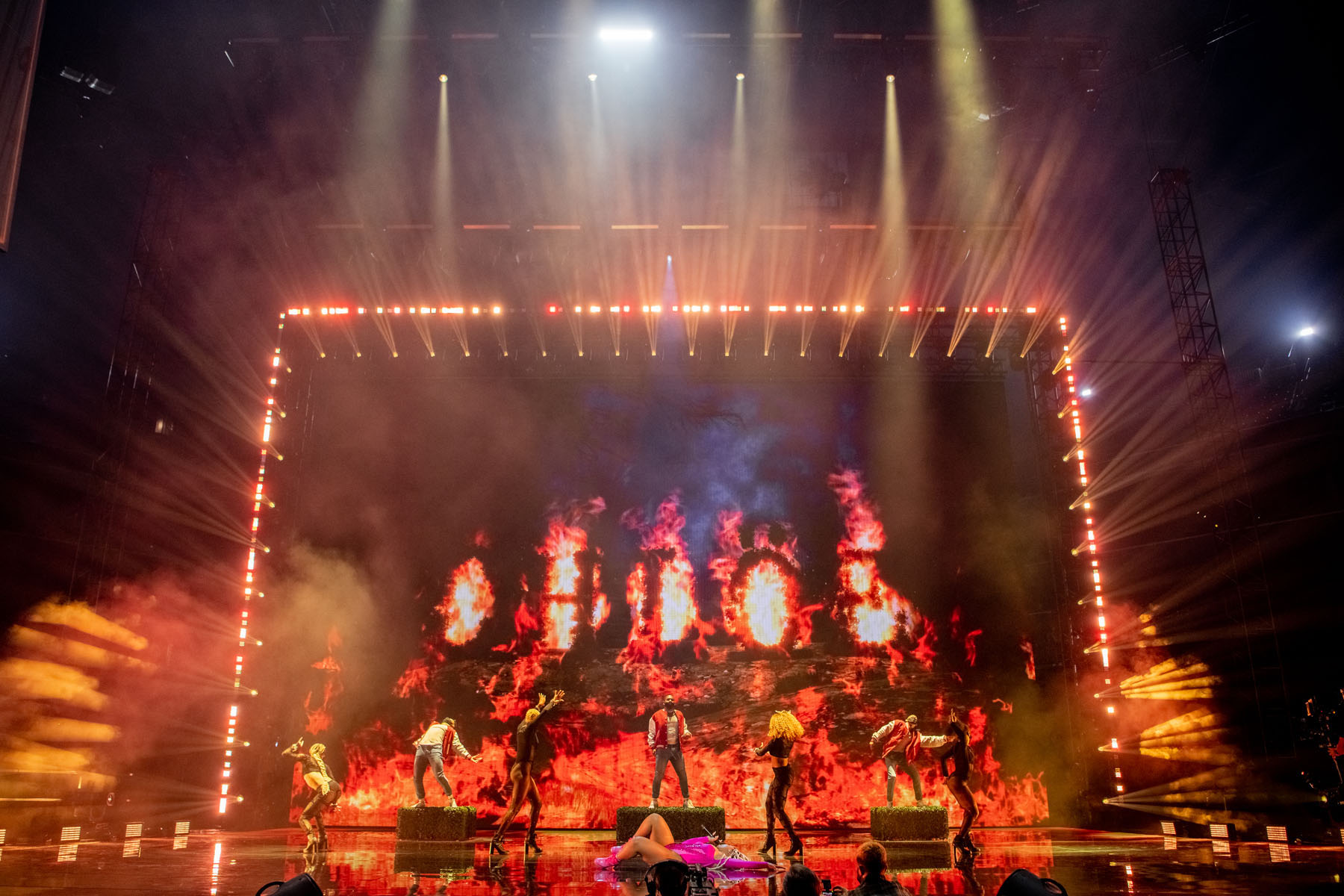 Photos are courtesy of Stephen Bondio and Yellow Studio