Hamburg’s world-renowned Kampnagel is Germany’s biggest independent international production venue for the performing arts. Based in a former crane engineering factory in the lively Winterhude district of Hamburg, this charismatic space dates to 1865 and has been reinvented by Kampnagel as a buzzing multi-venue creative and cultural hub hosting and producing theatre, music, dance, arts festivals, and concerts since 1982.

This year, Kampnagel has invested in Robe T1 Profile LED moving lights which will be used as required across their six main performance spaces.

The T1s were selected after careful consideration, a shootout with some competitor products and a strong recommendation by Freddy Niß from lighting design and technical consultancy, FredUp e.K.

Kampnagel whose current artistic director is Amelie Deuflhard, approached Freddy to advise on the best choice of a contemporary moving light. They had a specific budget and ideally wanted 10 fixtures that were flexible enough to work across all performance genres and satisfy their diverse needs and range of lighting specs received from incoming productions.

Before the T1s, they had used 10 discharge moving wash lights (from another manufacturer), and the initial idea was to purchase a similar but more modern fixture with equal or increased brightness.

Freddy was already involved in testing and recommending T1s to the Hansa Theatre in Hamburg, when first asked to assist Kampnagel in their quest for new luminaires. Impressed with the results of his research, he encouraged the Kampnagel lighting team toalso look at Robe’s T1range, and the T1 Profile in particular.

“I was already convinced by this time that T1 Profile was a great choice, but it was important that the Kampnagel crew witnessedthe light in action for themselves,” explained Freddy, saying that the 7 – 49 degree zoom range which enables it to work as a ‘wash’ plus other factors like the silent running, excellent colour mixing, fantastic range of whites, brightness and sheer quality of the light output immediatelyticked all their main boxes.

“This fixture is designed and developed for a broad range of theatre applications and that’s exactly what they needed,” he stated, adding that the light weight was another factor as the lights can be handled by one personwhich is also ideal for Kampnagel’s set up and operation.

Colour mixing was crucial.“The detail and finesse of the T1 made it a clear winner compared to any other fixtures in the frame, and this became especially clear during the physical shootouts,”said Freddy. All this, combined with the fine-tuned dimming and super-accurate framing shutters convinced all at Kampnagel that the T1 Profile was for them.

They were used extensively throughout August on selected productions for Hamburg’s 2021 Internationales Sommerfestival (International Summer Festival) which is a major part in Kampnagel’s annual season and takes place every August both inside and outside the factory building as well as in other places in Hamburg. This year’s festival event schedule featured over 30 different productions and the same number of concerts that took place on two open-air stages in the Kampnagel garden, and although slimmed down to comply with the current Covid-19 regulations, it nonetheless offered a vibrant programme of international theatre, performance, dance, music and visual arts and site-specific projects eagerly consumed by a performance-hungry public. 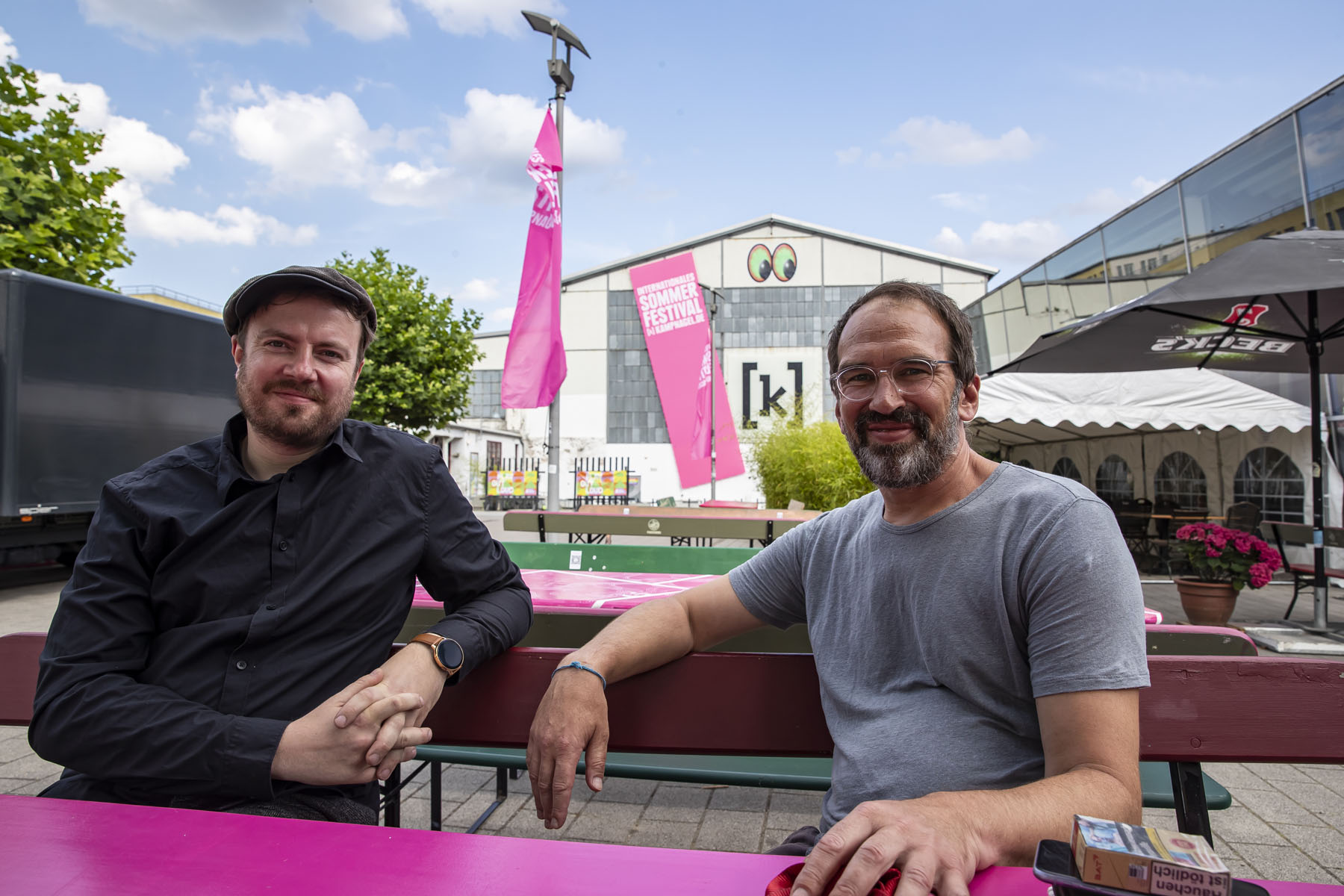 on the left is Freddy Niß with Michael Lentner, head of lighting for the International Summer Festival’s

During this time, the theatre was visited by multiple lighting designers working on different individual productions, with all the various lighting designs overseen by the festival’s overall head of lighting, Michael Lentner, who was very enthusiastic about the arrival of the T1 Profiles, used mainly in K6, Kampnagel’s largest venue with 850 seats.

Dennis Döscher, Kampnagel’s head of lighting commented, “We are really happy! For theatre use, the T1 is the best LED moving light we’ve ever used at Kampnagel to date!”

Freddy first saw Robe products at one of the Prolight+Sound expos in Frankfurt, and then started specifying certain fixtures, as appropriate, for his different show lighting designs. With the T1 launch in 2018 he recognised Robe’s commitment to developing innovative theatrical ranges and properly addressing these sector requirements.

FredUp is a new company, started to channel Freddy’s consultancy work, and to sell a few carefully selected product ranges. He’s also well known as Fred Lighting Design having started his professional career in Hamburg as a set carpenter in the early noughties before moving on to specialise in lighting and other visual technologies. His experience has included gaining a ‘Master in event technology, specializing in lighting’ degree from IHK Hamburg.