Multiple Grammy award winning Kelly Clarkson has rocked the foundations and redefined daytime talk show television with her award-winning,high impact “The Kelly Clarkson Show” (TKCS). The one hour syndicated daytime show produced by NBC Universal Syndication Studiosis anenergetic mash up of chat, stories, opinions, humor, and surprises involving an array of interesting guests, personalities, and celebrities. And, and as you might expect from this massively successful singer / songwriter, a healthy blast of superlative music! 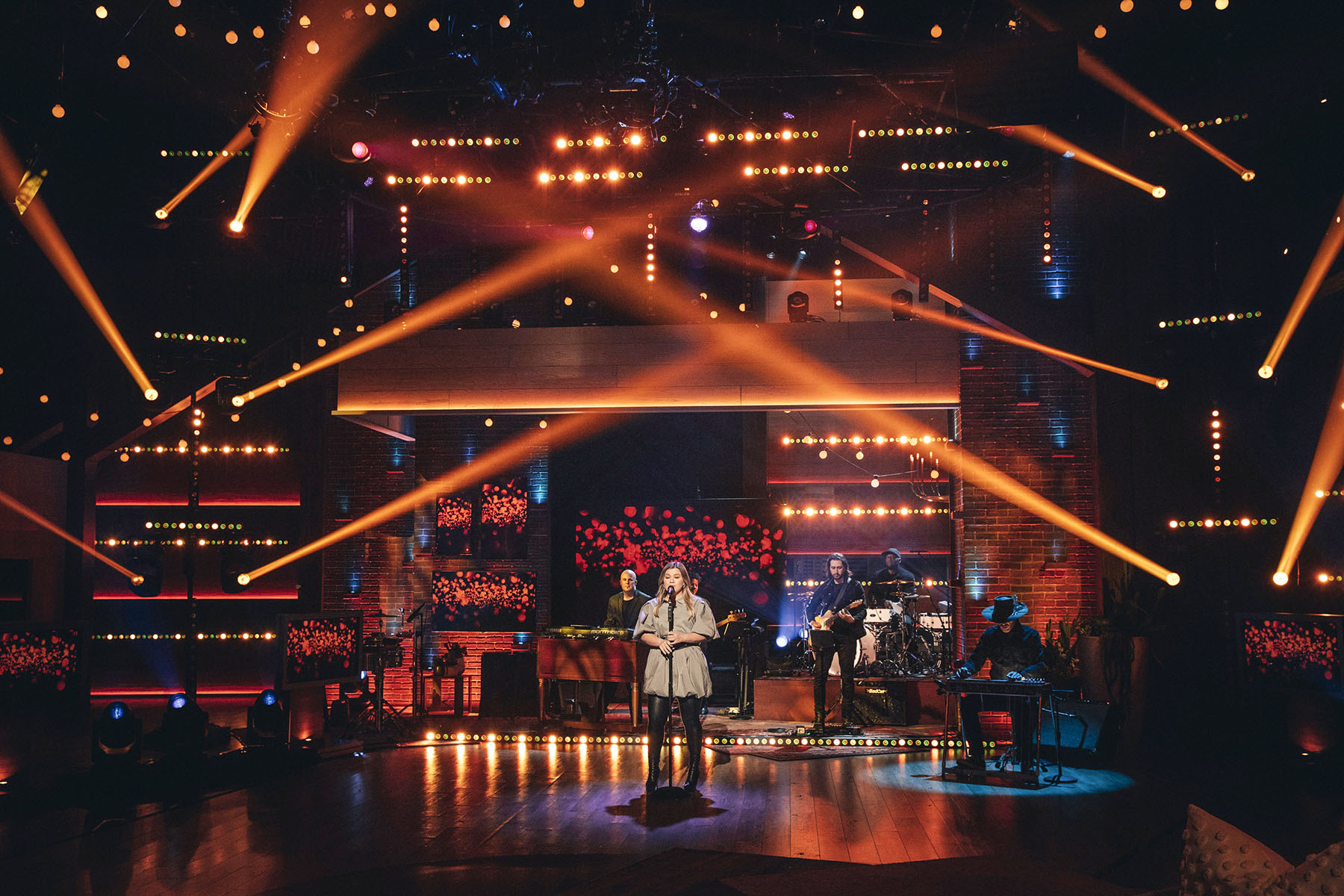 The pleasure and the pressures of lighting this dynamic and ever-shifting environment recorded on Universal Studios in LA’s Stage 1,has been down to Darren Langer of DCLighting, a lighting design and direction practice also based in LA, specializing in television and multi-camera environments. Their work encompasses broadcast, streamed shows and events, awards extravaganzas, talk shows and music-based projects of all sizes.

Darren has relied on several specific Robe products throughout series 1 and 2 of The Kelly Clarkson Show – Pointes, BMFL Spots and BMFL Blades, PATT 2013s, Spiiders and Tetra2s –to ensure that the studios and sets have looked fresh and invigorating every time for this truly unique talk show format.

Each show kicks off with a ‘Kellyoke’, a rousing cover version selected by fans, arranged specially to fit the 1.30-1.45 timeslot by musical director Jason Halbert,and delivered with the dynamic full-force Kelly Clarkson treatment.

Ahead of the first series launched in 2019, Darren was interviewed by the network executives together with several other lighting designer / and director candidates, from which he was selected.

It was a totally new client, so he was delighted to get the job based on DCLighting’s vast and richcreative portfolio of lighting music and talk show projects over the years. 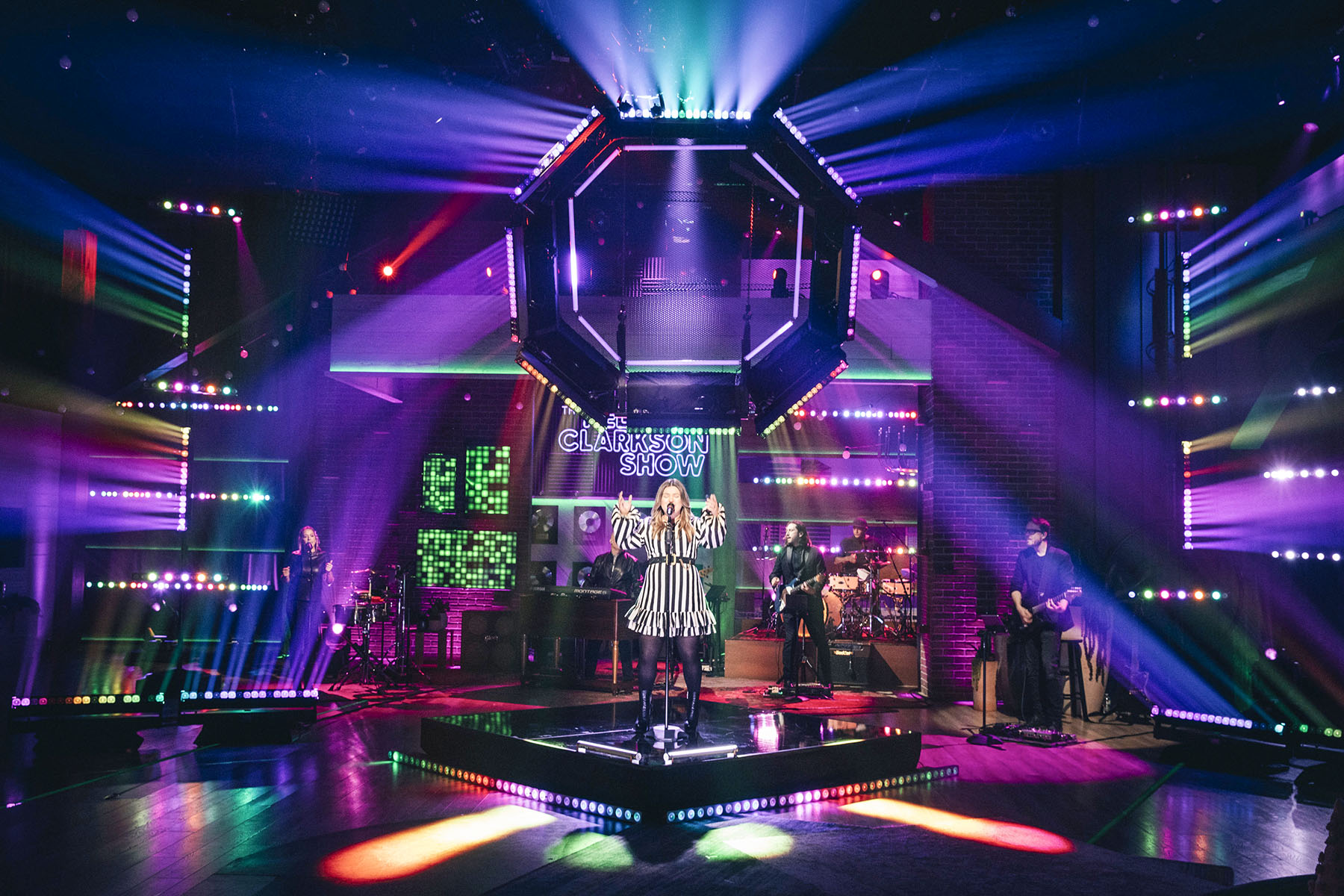 “One challenge with this one was the truly multipurpose nature of the lighting required,” explained Darren. It demanded a fine balance of musical performance and expression juxtaposed withthe more structured approach of a daytime talk show.

He knew immediately the lighting design would have to be uber-adaptable, and Robe products immediately entered his thought process.

Together they all contributed to setting the tone of the show, which is lively, upbeat, and energized.“They are all amazing people to work with,” he states, detailing how they developed a fluid visual language by collaborating closely.

“This was the only way to produce a product with the quality and finesse we desired,”and also not possible without great support and much patience from ‘executive in charge of production’, Jonna Walsh.

With flexibility at the essence ofthe lighting, Robe products ensured “we had capacity to transform instantly from a sharp, animateddaytime talk show set to a sexy after-dark ‘musical dream’ at any point,” says Darren … and switch back instantaneously at the push of a button! 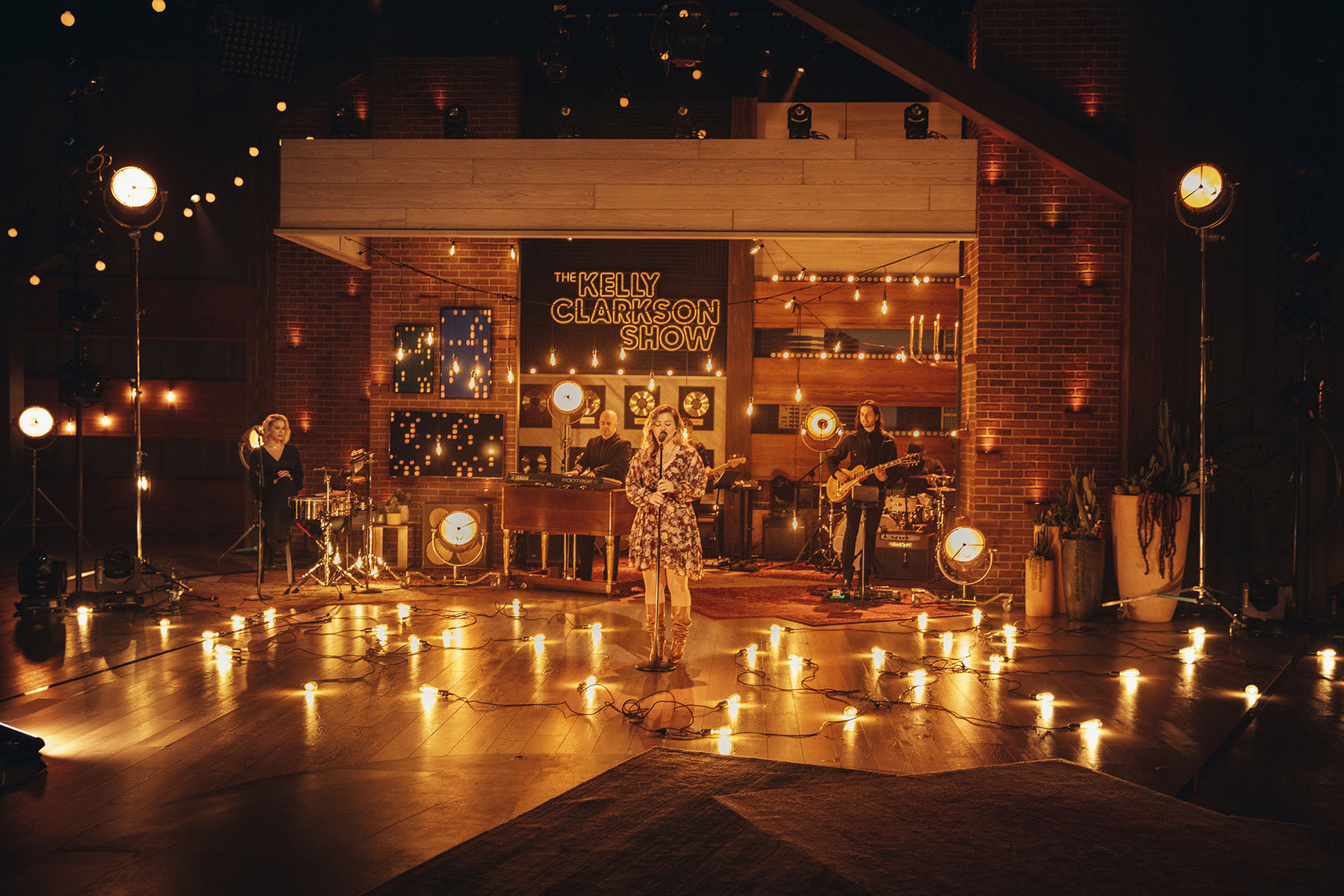 He also needed to create a space where viewers – both live for the start of the first series – and thenonscreen as the pandemic sentthe show digital – would be continually astonished at the visual transformations and enthralled by what might come next, keeping it fresh and different.

Season 1’s lighting had eight Robe BMFL Blades and eight Pointes permanently installed, and these were augmented with more Robe specials, depending on the songs and action of the day.

Frequently used fixtures included PATT 2013s 15 x Spiiders, and 24 x Tetra2s, all; supplied, together with the rest of the lighting equipment, by Illumination Dynamics.

Fixture positions varied constantly around the studio, but “these Robes they were fundamental to each show,” said Darren, giving them almost infinite options to create different looks throughout the season. The goal was to never repeat the same look!

He maximized the Pointes in particular as theycan do equally good wide and narrow beams and have an endless array of in-air effects and fast movement perfect for floor coloring and texturing, and for fast color chases and movements. “We’d often hang them and even use as back-light on the artists for creatingmoodysilhouettes and other trick-of-light gags!”

The Spiiders were another multi-tasker with lots of different beam effects and quirky pixel and graphic effects possible on the LEDs. They were also excellent floor washers, back-of-shot eye candy fillers and different shapes.

Two RoboSpot systems were an invaluable asset to the show, both run by Chris Nelson. The BMFL Follow Spots being remote controlled were positioned one over the audience and one above ‘home base’ where Kelly usually sits for interviews, allowingpick ups in any part of the area that the host or guests would generallyroam. The two base stations were located side-by-sidebackstageenabling Chris to easily swap between as needed.

Darren has used Robe products for many years before TKCS. The BMFL became a workhorse for a series of awards shows they were lighting with one of Darren’smajor mentors, the legendary Allen Branton.

These and all the otherlights in the studiowere controlled via a grandMA2 console.

The schedule was intense. They recorded two shows minimum a day for 30 weeks working three to four days a week, with the lighting rig changing weekly and sometimes even daily, de-rigging and re-rigging to get exactly the right fixtures for the specific action each time.

After the timeframe, programming was the nextmost galvanizing task throughout the two series for which Darren had input froma fantastic team over the period comprising Andrew Law, Brian Larsh, Brandon Dunning, Jeff Handke, Felix Peralta and Tyler Glover.

With the two performances recorded each day plus guest slots and performances, interviews, demos, games and special themed shows, time was “never on our side” says Darren, although they were allfully geared to working atlightning speed, smashing deadlines and keeping pace with the skills and talent of Kelly and her band, in addition to constantly popping out ideas to make thenon-performance segments look exclusive!

The lighting department was also controlling a media server that dictated most of the screen content, so, with the assistance of technical manager Eric Feder, they didn’t miss a beat!

For Darren, the most enjoyable parts of TKCS were working with a truly inspiring host and “so many people with great energy.” 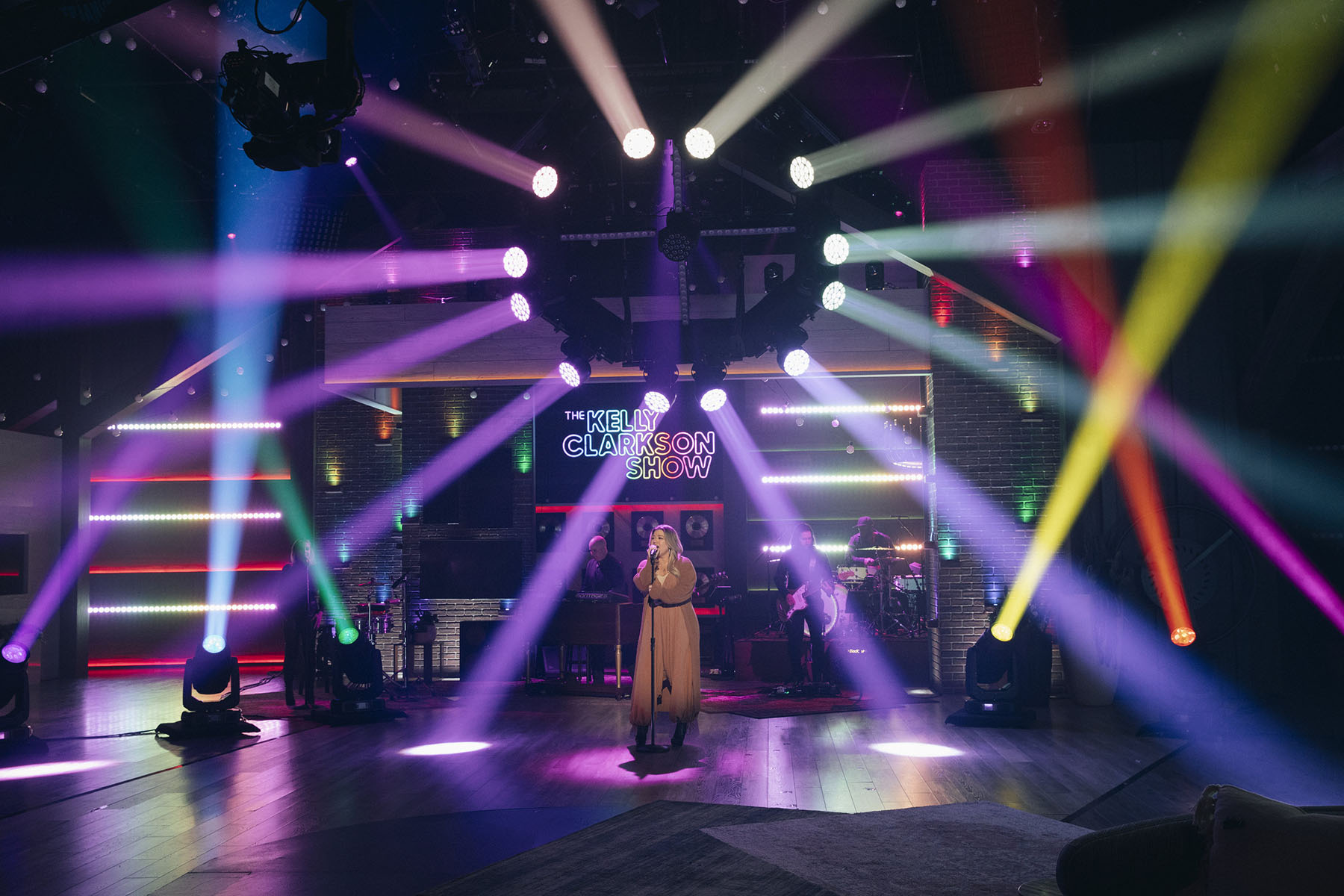 Furthermore, he won the Newscast Broadcast Production Award for ‘Entertainment Lighting Design’ for the show’s 2019 and 2020 broadcast years.

Darren is the first to credit his “incredible” team for theirvital contributionsto gaining these accolades, and this includes Kirsty Robson, DCLighting’s VP of Production who handles all the logistics, marketing, communications and client networking, and gaffer Andy Anderson who installs the different lighting designs each day.

Andrew Gonzales is their proactive lead tech, looking after the lighting system as well as multitasking as best boy, ensuring the gaffer is happy as well as managing all the rental ‘specials’ in and out daily! Morgan Evans and the late Carlos Colina were also integral to the drafting and visualizationpart of the process.

TKCS airs on multiple stations across the U.S. in 100% of the country and is anchored by the NBCU station group.Season three will be starting shortly and the NBC owned Television Stations Group has just announced that ‘The Kelly Clarkson Show’ will take ‘The Ellen DeGeneres Show’ timeslot on the ten NBC-owned stations carrying both programs once Ellen finishes in 2022.