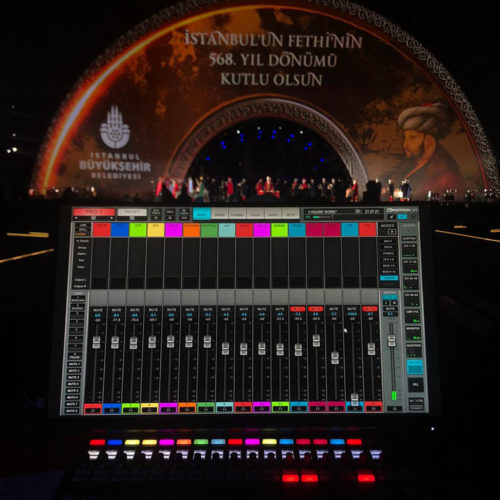 Oksuz, a prominent live sound engineer in Turkey (Sertap Erener, Athena and Sebnem Ferah), explains why he chose the eMotion LV1 mixer for this project: “I am used to working with plugins in live events, so when I heard that eMotion LV1 was a very natural platform for running Waves plugins live, I immediately wanted to check it out. When I did, I was hugely impressed with the mixer’s pristine sound quality as well. In this specific show, my FOH position was 40 meters away from the PA, and I could distinctly hear every single detail of my mix.”

”LV1’s super-fast setup is another huge benefit,” Oksuz says; “you can load your LV1 system in ten minutes, and you’re all set. You can start the concert within 30 minutes, including all system settings. There is also an incredible technical team behind you at Waves: I can call them from Turkey, directly to the Waves team, and they answer all my questions instantly. What’s also great about the LV1 is the super-flexible offline prep ability: I can work at home, on a tour bus or in a hotel room, and get my show perfectly prepped. It’s absolutely amazing that I prepared my last concert at my home! In addition, I can take the Waves plugins used in studio recordings and put them in my LV1 system, and the quality stays the same.”

“For this massive show,” Oksuz says, “I used all of the LV1’s 64 stereo channels. This complex production started with various speeches and continued with two different orchestras: the Mehtran Bolugu Turkish Ancient Army Orchestra, which has a 2100-year history and utilizes a wide assortment of musical instruments, both ancient and modern – from Turkish Iron Age percussion, to the ancient Persian Kus (a massive war drum, originally elephant-mounted, that produces 50Hz notes and below), to modern trumpets and cymbals accompanying a choir; and a symphonic orchestra led by famous Turkish composer/producer Iskender Paydas; plus drums, electric bass, guitar, a lead singer, a choir, and additional pre-recorded tracks triggered from Pro Tools. All the live music, speeches, video sounds and jingles were mixed on the LV1 for the PA, and then sent to the broadcast mixer (two channels) from the LV1’s matrix-out, and the broadcast stream used the same mix.”

“The Waves plugins integrated within the eMotion LV1 were essential to mixing all these immensely diverse elements,” Oksuz says. “My favorites are the H-EQ Hybrid Equalizer, Torque, the F6 Floating-Band Dynamic EQ, Bass Rider, Vocal Rider and the S1 Stereo Imager. Other must-have plugins include the NLS Non-Linear Summer, which I had on all 64 channels and all 24 subgroups, utilizing the different characteristics of each of the plugin’s mix-preamps. And I always use Smack Attack and V-EQ4 on kick, snare and toms. These two plugins enable me to attain the genuine acoustic tones of the drums and percussion by using minor tweaking.”

“For vocals, the H-Reverb Hybrid Reverb is a favorite, allowing me to accentuate very soft and distinctive features of the artist’s vocal characteristics. The Renaissance Axx and the Q10 Equalizer are perfect for processing guitars. The C6 Multiband Compressor, API 2500 compressor and the L1 Ultramaximizer are absolutely amazing when used on my main master and subgroups: they bring out all the essential elements of my mix. For tuning my PA system, I use Smaart v8 and Waves’ TRACT System Calibration plugin.” 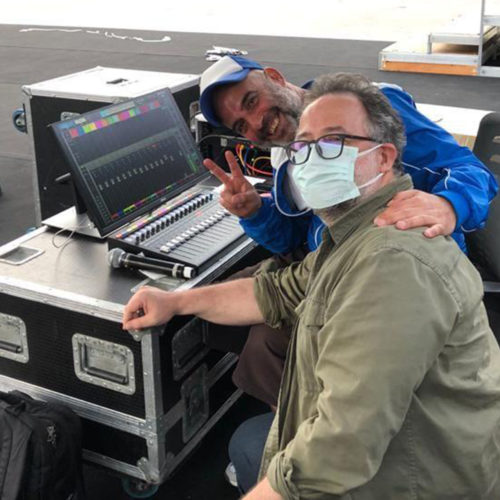 “The LV1 is made with the convenience of an engineer’s workflow in mind,” Oksuz says. “Any auxiliary tool you are looking for is in front of you – just plug and play. It’s super-flexible: you can do your job on one screen if you want, or you can set up four screens and see the page you want on each screen – a snapshot on one screen, Mixer 1 on another screen, etc. I also like how I can divide my whole mix into eight custom layers, and the availability of user-assignable keys for saving sessions and loading the session flip a/b channel – this procedure is incredibly fast and very useful. Also, I record all my concerts, and at the same time I perform a virtual soundcheck, which speeds up my work significantly. Furthermore, I can comfortably use the fingers of both my hands on the screens simultaneously.”

“I’ve done about twenty concerts with the Waves LV1 so far,” Oksuz sums up, “and I can say now that its superior sound quality has surpassed all my expectations. The overall sound quality of the mix is incredible! I have been working as an FOH engineer for over 32 years and using a digital mixer for the last sixteen. I’ve now switched to the Waves eMotion LV1 mixer because I believe in its workflow, technology and scalability, I believe in the future of its system, and I believe in its sound.”