Zodiac The Musical is a brand-new musical produced by Peet Nieuwenhuijsen, directed by William Spaaij and staged at the Koepelgevangenis,a former prison in Breda, The Netherlands, which provides a spectacular backdrop to this compelling and entertaining piece set in 2031 … focussed on a number of human, political and environmental issues. 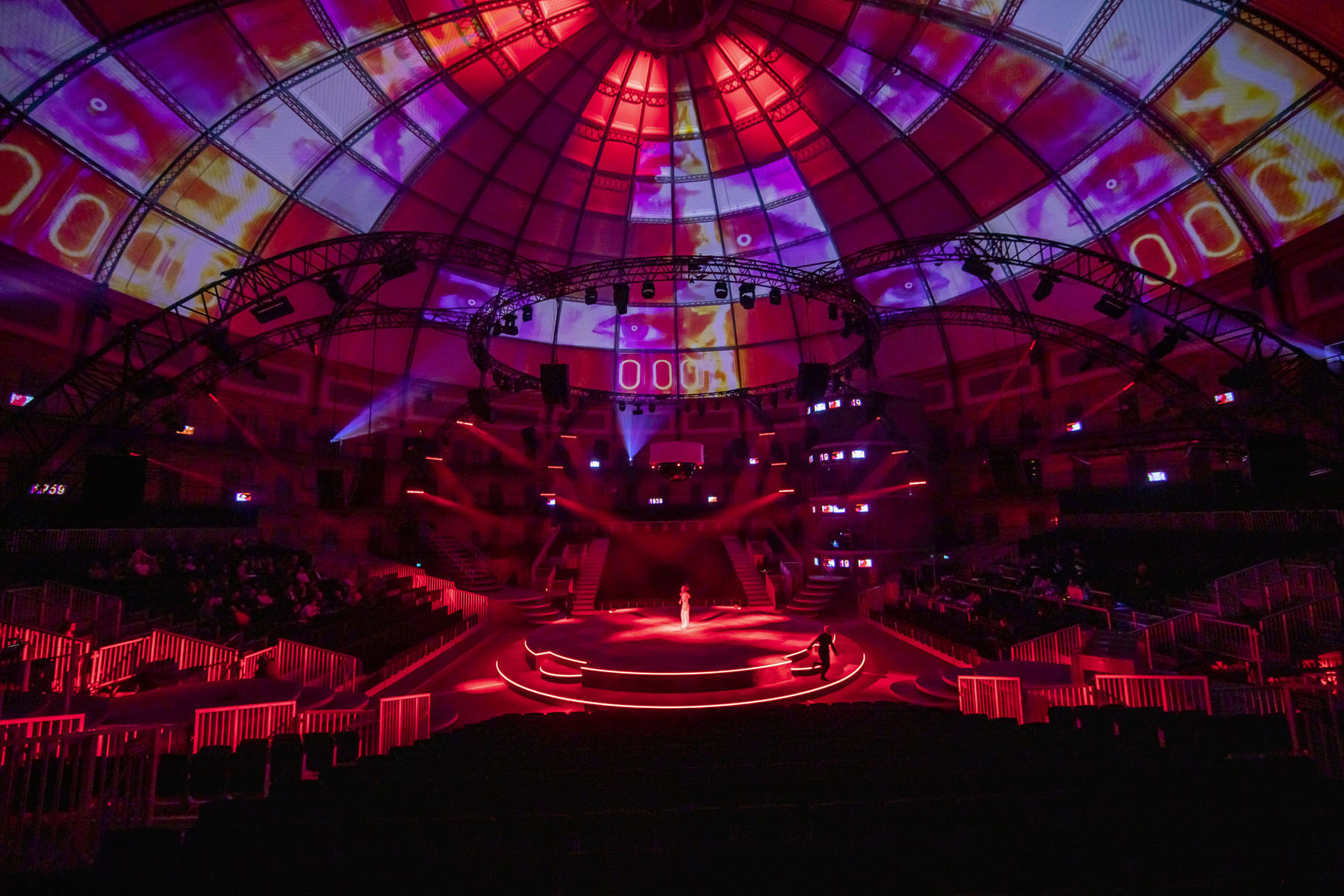 Lighting designer Marc Heinz was among a talented team working under the technical production umbrella of Unlimited Productions – also based in Breda –helping to deliver this captivating new work.

Marc and his assistant designer Jordy Veenstra, Michiel and the entire production team were delighted to be back working on a show after a long break due to the pandemic, and particularly in such a special space.

The prison was designed by Johan Fredrik Metzelaar and opened in 1886 based on a panopticon design, whereby the activities of four stories of cells could be observed by a minimal contingent of guards stationed in the centre. The Koepelgevangen is complex was designated a national monument in 2001 and housed a women’s prison until 2013 before closing completely two years later. Since 2018, it has been temporarily used as an event space, waiting for a new owner and a renovation plan.

Peet Nieuwenhuijsen needed a circular venue for his concept to work – which included spectacular projections onto a domed ceiling–and had initially staged an exploratory show in 2019 at the Planetarium Amsterdam.

And … it presented some fundamental challenges for the production team,primarily an unknown weight loading for the domed roof, and for lighting in particular, it brought some unexpected gifts, like the glass brick ‘shower tower’ which became a permanent internally lit set feature and vital part of the narrative. 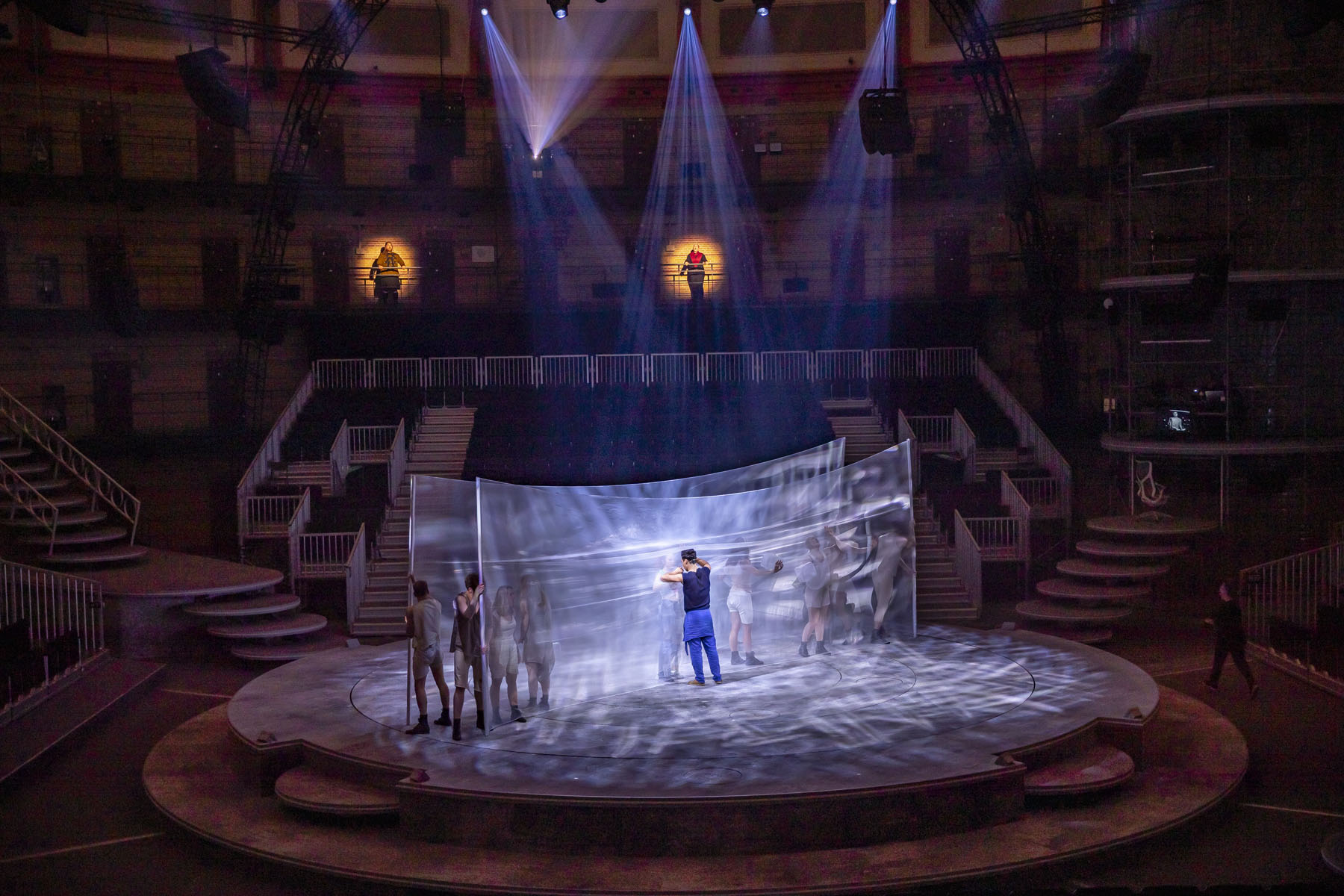 A glass-floored basement –installed in 1999 as a recreation area– was another brainteaser with no weight loading data. Special spreader arrangements had to be made to ensure seating tribunes and the four ovular stepped ramps that intersected the space and divided it into quadrants were installed without putting weight on the glass area.

The storyline – stageplay by Dick van den Heuvel with dramaturgy by Pieter van de Waterbeemd– evoked surveillance society with constant Orwellian monitoring. Thirty-eight LED screens dotted around the upper levels area metaphor for big data recording and crunching, with over 70 drones – provided by Dronisos from France –joining the cast as a reminder that shady, anonymous governmental institutions shrouded in secrecy and subversion are in control. The faceless technicians running these operations are sealed behind closed doors in the shower tower.

With original plans unavailable and no records existing in the municipality, a full 3D laser scan survey of the building was completed – needed for the UV-mapping of the projections –was followed by a painstaking rope access examination of the roof construction conducted by the Unlimited Productions team to ascertain the roof weight loading capacities … which were judged to be ‘extremely little’.

They received the go-ahead to remove around 1000kg of old house lighting and associated steel detritus from the roof which freed up just enough capacity to rig a very small top centre circular truss at the top – which is rigged with the 12 x Robe Spiiders. These are bright enough to reach the stage 30 metres below for a general layer of wash lighting, and light enough to be safe!

The only other flown element is an ‘eye’ set piece which flies in and out.

It was also necessary to remove the old house lighting to get a clear path for the 7 x 20K projectors rigged in seven prison cells on level four, spaced out around the 52.5-metre roof circumference.

Everything else had to be ground or side supported. 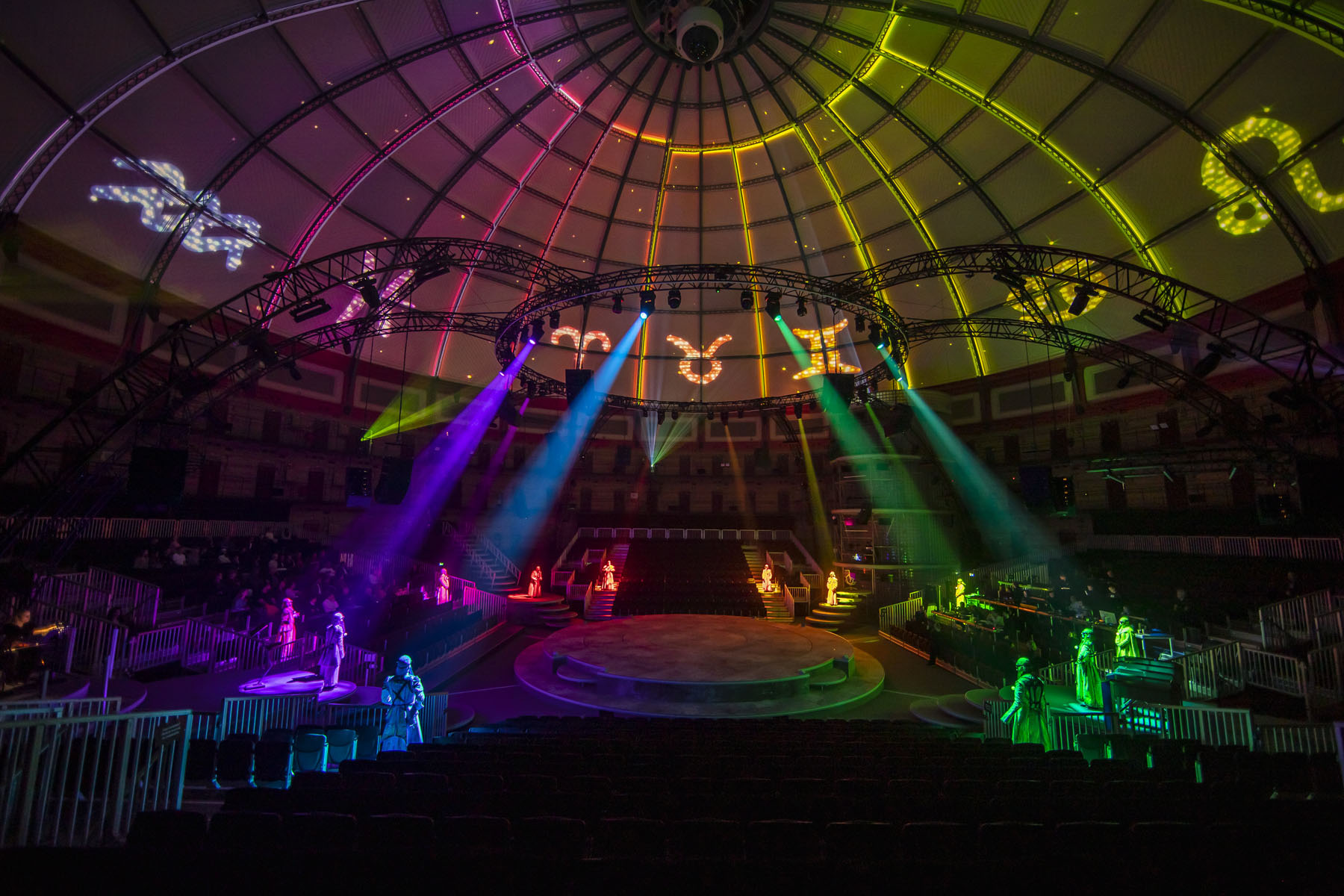 After much mind mapping, Michiel, Marc and Ruud de Deugd (head rigger and production structural engineer) produced the elegant 8 x curved leg spider-like ground support structure design which connects to a 15-metre diameter circular truss in the middle positioned 12 metres above the central performance. This provides close lighting positions for the main performance space which is 14 metres in diameter complete with a double revolve stage.

Being a prison, Koepelgevangenis has only one small entrance / exit and that’snot even enough to reverse an artic, so all the production kit had to be unloaded outside and hand-carried inside. This was a painstaking and long winded process, but compared to normal, the build schedule was relaxed and fluid, as to some extent it had to relate to how the general Dutch pandemic response and the restrictions were developing.

Once the rigging and set were solid, Marc and Jordy began properly assessing the lighting needs having joined the project towards the end of 2020.

Working in the round is always galvanising, getting any side light is a constant battle, and everything must look uniform from 360 degrees ofspectator seating, so the Robe Spiiders on the spider structure are critical for top light coverage.

The stage stays bare aside from a few props throughout the entire performance, putting huge emphasis on the cast and lighting to get the energy ramped up and the strong emotional impact of the piece across.

Front light was another enigma as it needed to be rigged around the cell tiers, and after a test revealed that the fourth floor was the optimumposition, Marc auditioned several moving lights for this part including the Robe T2s, which were still a prototype at this time … but he chose it as his preferred profile to throw high-quality light the long distance from there to centre stage. 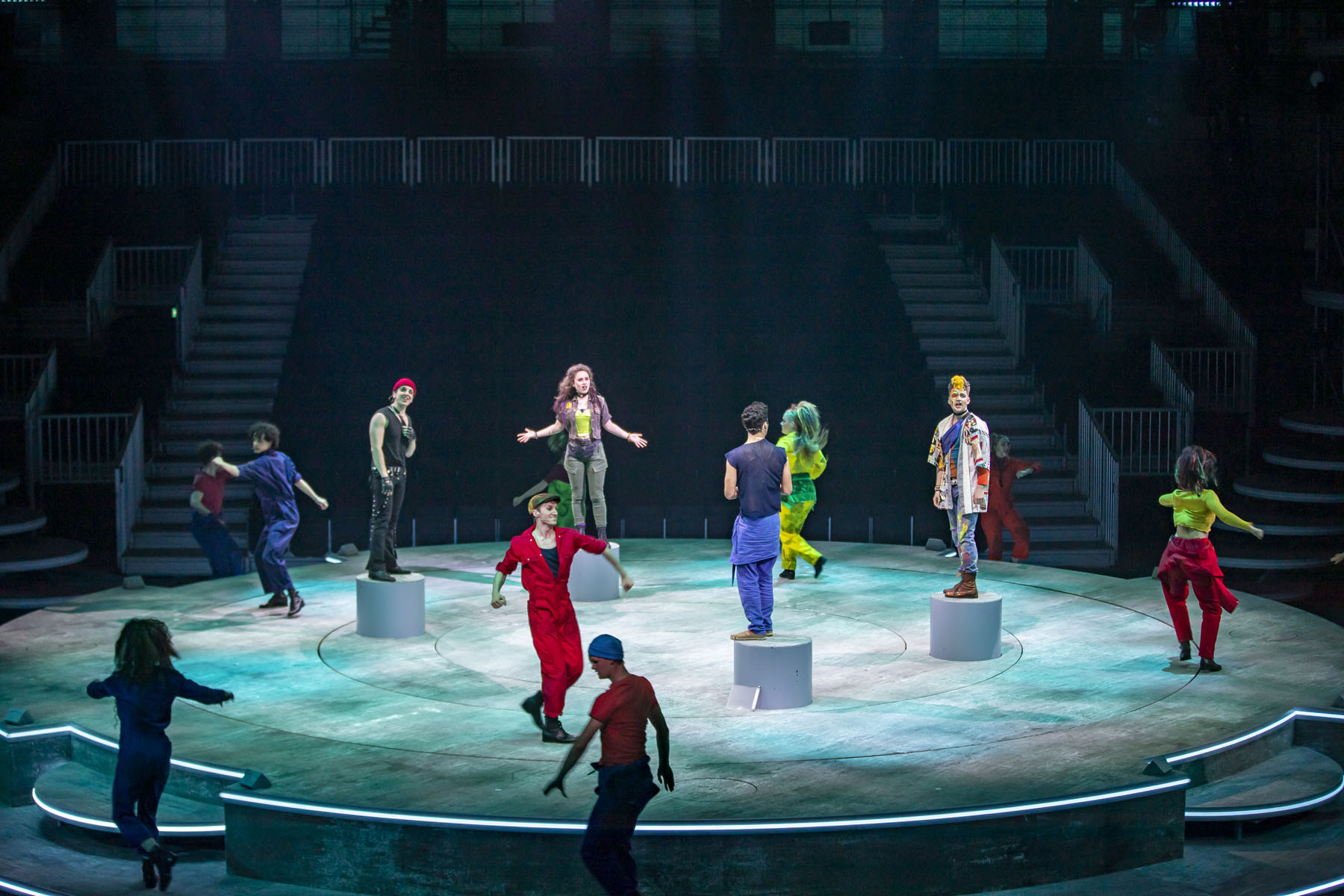 Robe’s distributor Controllux then pulled out all the stops to ensure that lighting supplier Events Light, also close to Breda, received the fixtures in time for the get in!

Twenty T2s are fixed to the steel beams around the main interior wall, each individually attached to the building by rope access riggers. A rope sits next to each light so it can be lowered for service. The other 12 x T2 Profiles are on the top circle of the spider ground support, positioned for closer front lighting.

“The output and colour mixing were perfect,” related Marc, “together with the weight (36.9kg).” He also likes the frost effects together with the overall quality and finesse of the fixture.

The cast are tightly choreographed by Stanley Burleson so elements like CRI and colour mixing are important to bring out the detail in the costumes without overpowering them with light.

Marc’s lighting is intricate and complex;he layers colour variants judiciously and meticulously on top of one another to evoke the mood and accentuate the emotion and intensity of the scenes and the seriousness of the messages. This treatment encourages intense concentration from viewers, so changes in the hue or shade have massive impact.

There’s plenty of long slow fades and some beautifully tight and precise shuttering throughout to highlight the cast onstage on the ramps and around some other parts of the building. 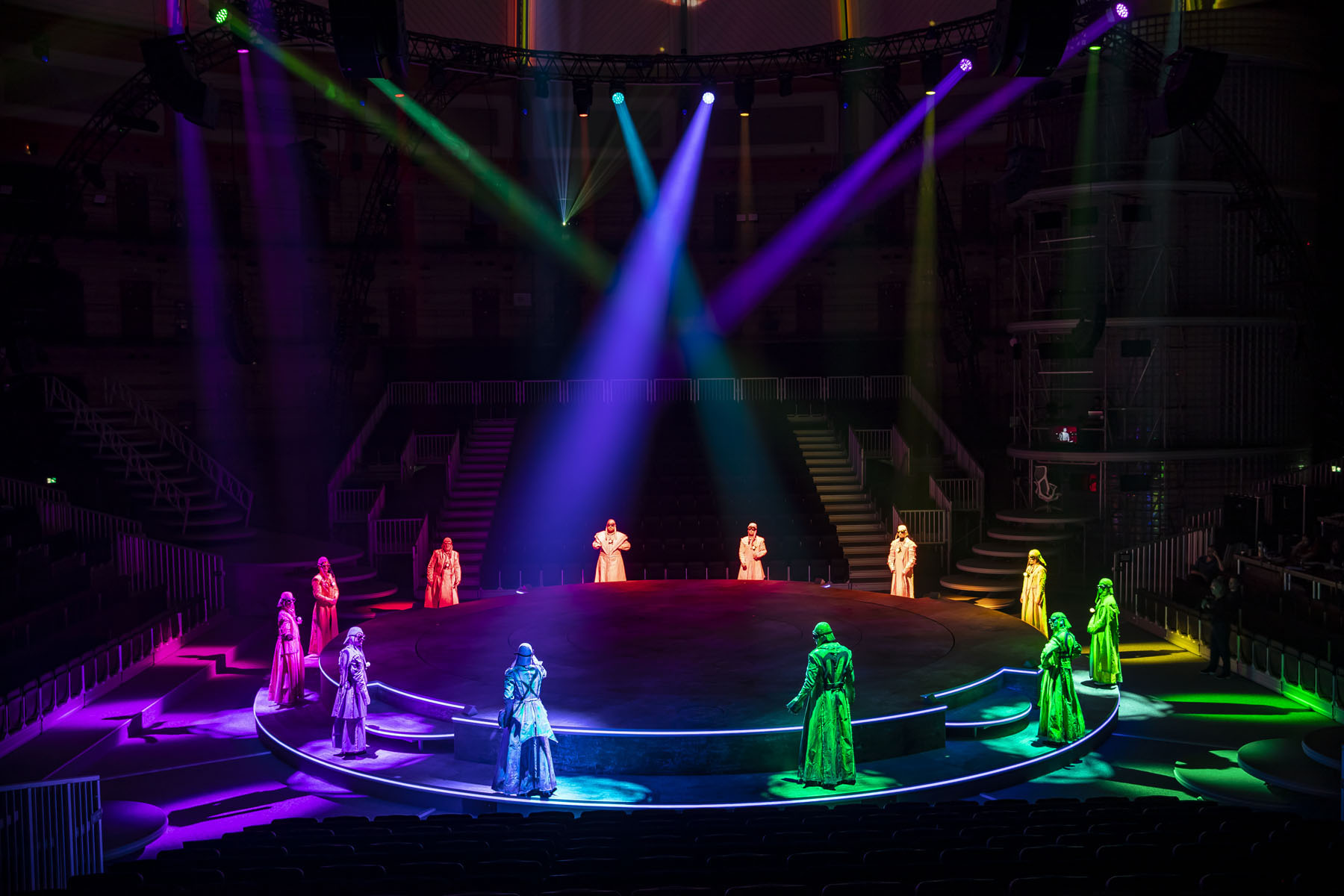 Marc was also very excited to be using new technology. “There’s always that ground-breaking buzz when using something new, and while there’s a bit of risk as well, Robe is a brand that I know I can also absolutely rely on, so all of this underlined my decision to go with T2.”

In fact, he has already specified T2Profiles onto another musical show that he will be lighting later in the year!

Twenty-two of the Spiiders are on the spider (ground support) structure. These and the T2s also on there are accessed viaa person lift as it is fully loaded with lights,so no climbing is possible. Access for getting the lift in position was also a consideration when positioning the seating and staging.

Sixteen Spiiders are attached to the balcony around the third level of cells, used for washing the venue’s dome and supporting the projections, with the final 12 on the top circular truss right up on the roof.

All 92 moving lights– including all the T2 Profiles and Spiiders –are working in conjunction with a Follow Me automated followspot system which is at the heart of the design, and this ensures that all the main characters in this very busy and fast-paced show always have the right lights trained on them, even when they are rotating on the revolve rings, which is essential for helping to unravel the convoluted plot.

In terms of style, Marc describes his lighting as an experimental blend of cinematic and operatic!

All the show’s lighting is being supplied by Events Light, who were among the first in Europe to receive the T2 Profile. 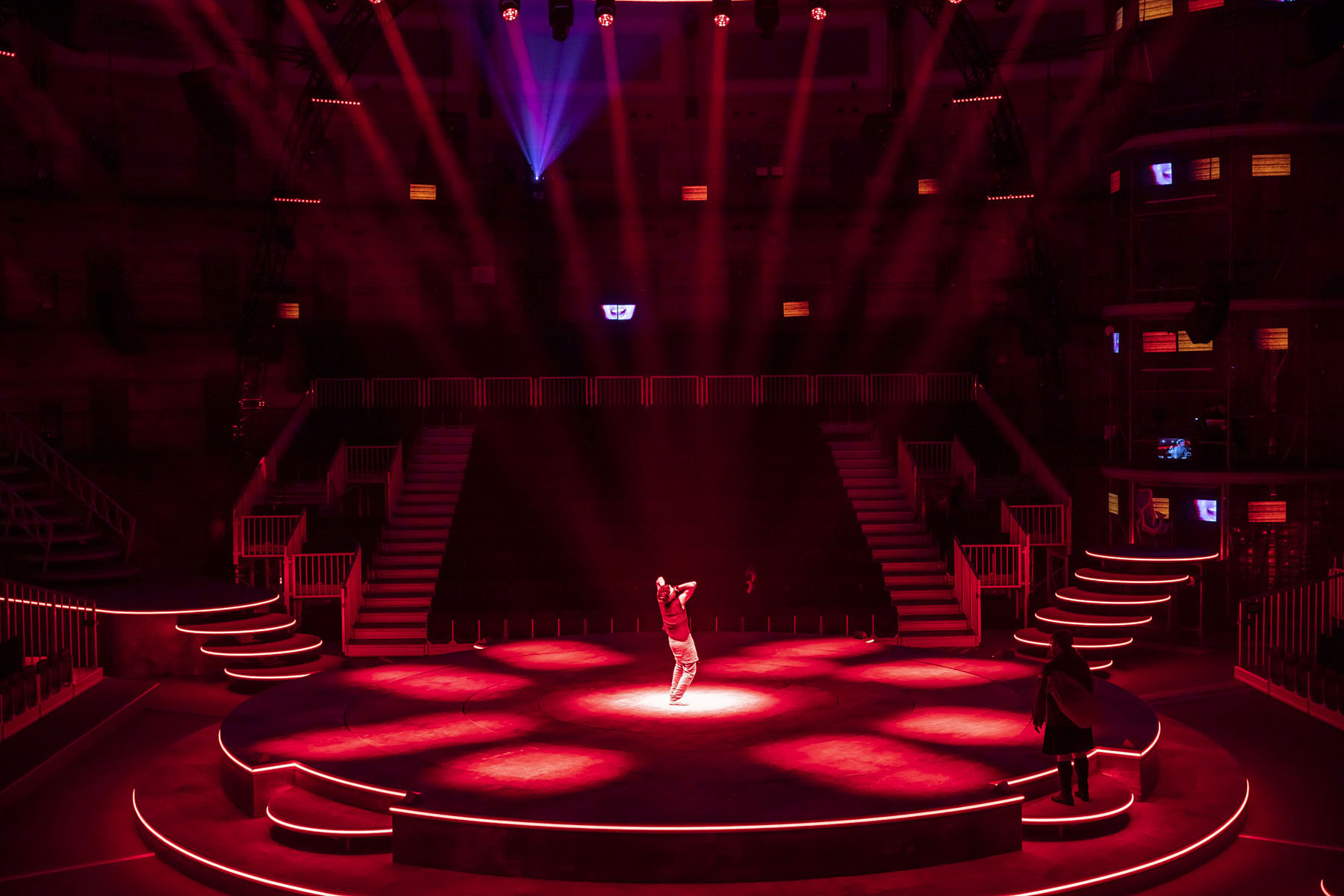 Lighting control is via a Road Hog Full Boar console programmed by Jasper Nijholt. Projectors and media servers were programmed by Ruben Boogaard,and since the show premiered on 5th July, both lights and video are being operated by Pascal Schutijser. It is a mix of time code for the large production numbers, but mostly manually operated lighting cues according to visual line-of-sight.

Audio is designed by Jeroen ten Brinke. The video design is by Arjen Klerkx and content created by Anouk Steenbakkers and Joost Gulien.